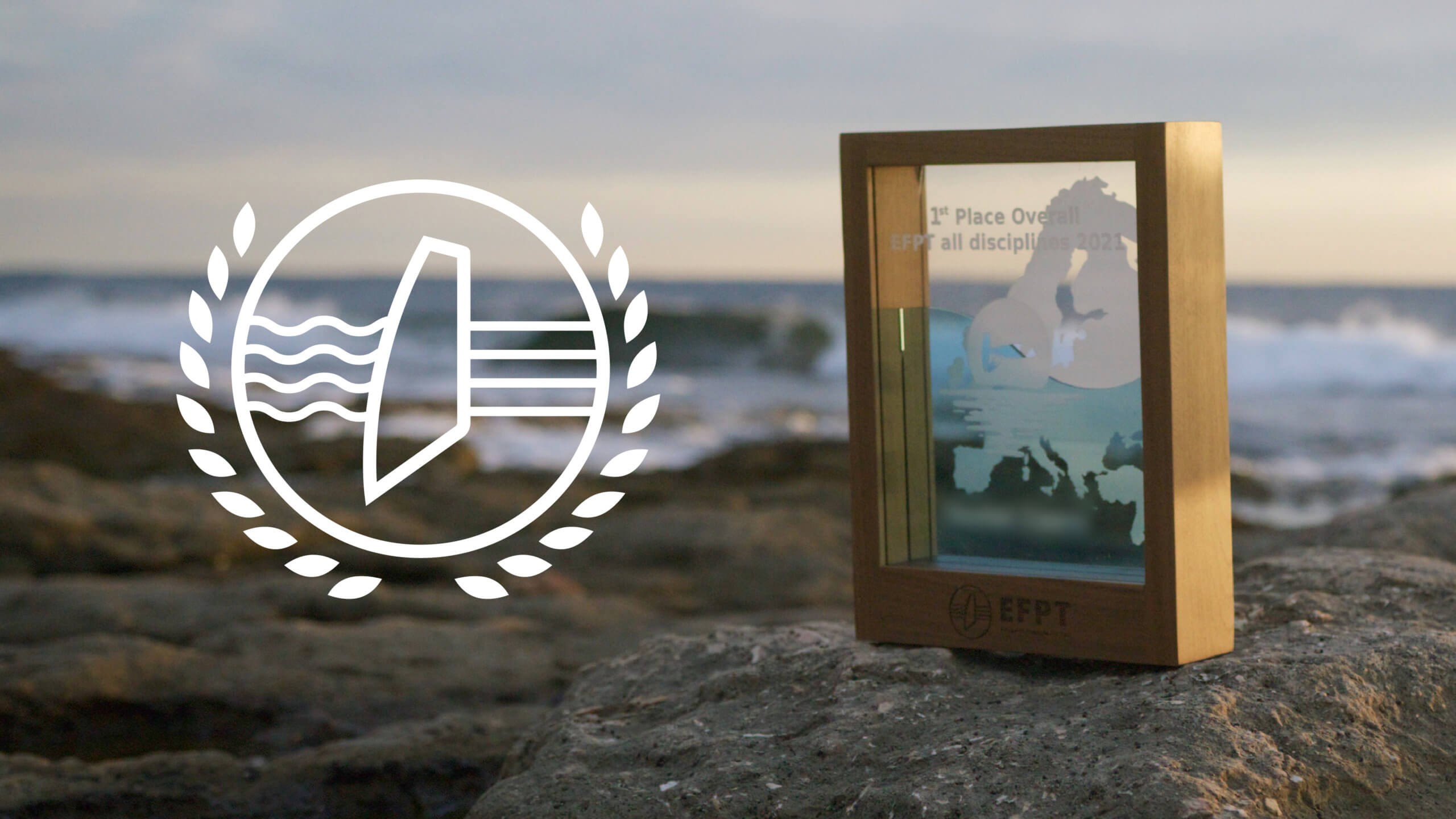 The 2021 EFPT Awards are out! The judges have decided and the public has voted, resulting in an impressive set of winners for this very first edition of the Awards. The results were announced by none other than Sandy Clunas in an online show that also recapped the 2021 season, and looked forward to what 2022 has in store for the tour. We have chosen a Best Trick of all time for the Men and the Women, as well as selected the best Combo Move. Furthermore, the ultimate Stylemaster has been appointed together with the Most Improved rider of 2021. They are joined by our Rookie and Rider of the Year 2021. And finally, to push the creation of quality freestyle windsurfing content, we awarded the best video part by a rider, and the best overall video edit by a producer. Read on to find out who the 2021 EFPT Award winners are…

Without further ado, let’s get into the first award:

Rider of the year – Amado Vrieswijk

This will come as no surprise. Amado Vrieswijk (FutureFly/Severne) has been dominant this season on both the EFPT as well as the PWA World Tour. Taking the European and World Championship in Freestyle in a calm and collected manner meant that he ticked all the boxes to become the EFPT Rider of the Year. We would like to congratulate Amado and we are looking forward to his next titles! 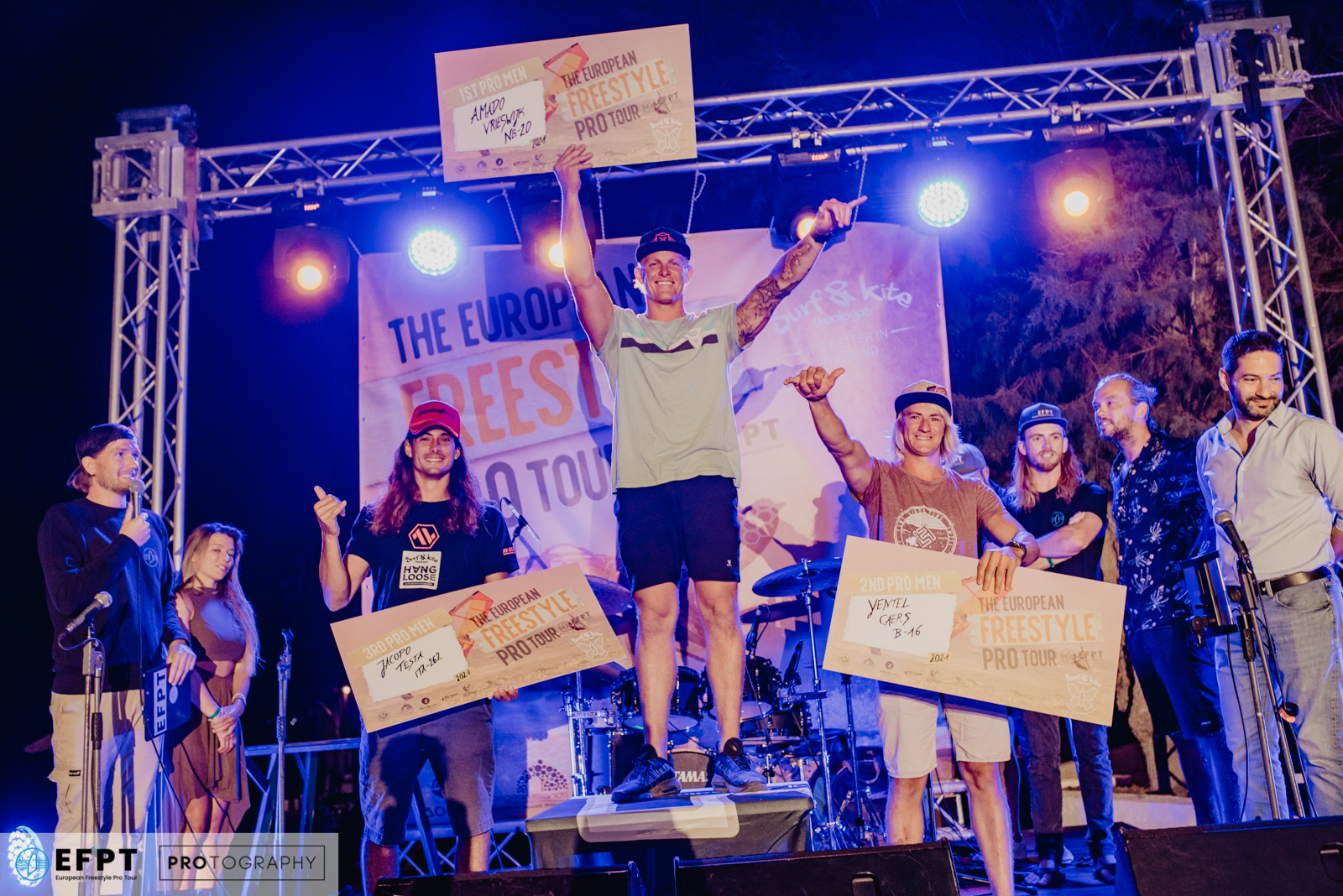 Amado Vrieswijk on top of the podium in Theologos, securing him the European title © PROtography 2021

Rookie of the year – Lucas Nebelung

Lucas Nebelung (JP/Gun Sails/MUF) made his first appearance on the EFPT at the beginning of the season on Lake Neusiedl and immediately turned some heads. People have been hearing of the Nebelung brothers and it was now time to see them in action. Lucas defeated Taty Frans in his heat, causing one of the bigger upsets of the event. Looking on form, he is a rider many will fear to be matched up against in the 2022 season and hence he is awarded the 2021 Rookie of the Year Award. With this he also wins the Gun Sails 4.8 YEAH sail that comes with the Award! Congratulations Lucas! 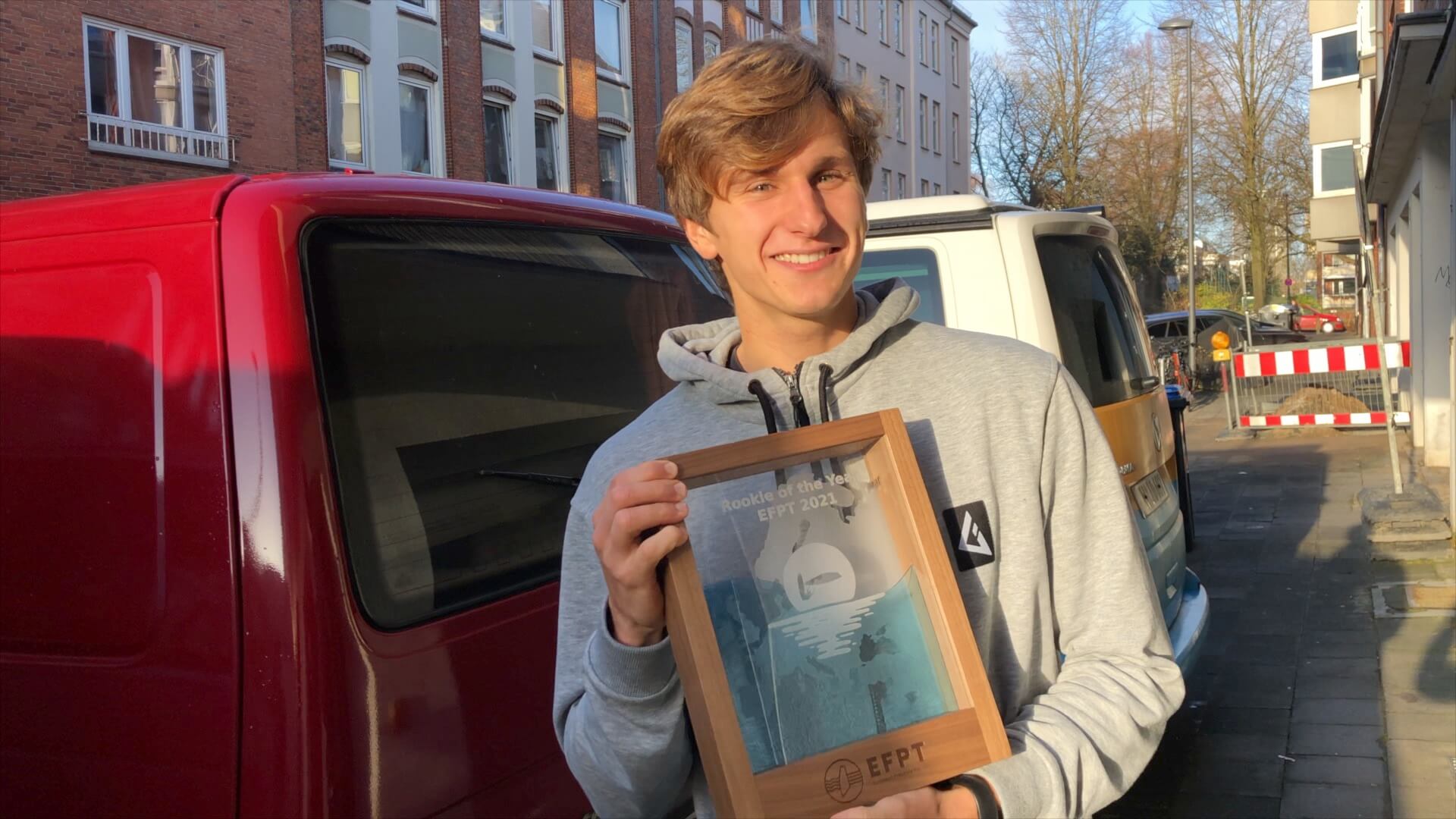 In a very close battle where almost any move could have won, it was Sam Esteve (JP/NeilPryde) who came out on top with his insane planing Air Skopu Burner. The frenchman was very happy, and said the following about the move: “This day was crazy, it was super nice conditions with offshore 35 knot winds and all my friends were there as well. We really pushed each other that day and I did a lot of double and triple rotations, but this one was for sure the best one!” Congratulations Sam!

The Best Trick Award in the women goes to Sarah-Quita Offringa (Starboard/NeilPryde/MUF) for her No Handed Culo. The freestyle queen has been pushing herself hard this year while training in Brazil, resulting in a lot of radical new moves, including this one. The Aruban rider said: “It’s a very fun move that I would recommend to anyone who wants to spice up their tricks! My intentions for 2022 are to get the double forward so keep your fingers crossed!”. Congratulations Sarah-Quita!

No one controls their “Spock into” variations like Jacopo Testa (AV-Boards/Point-7) does. This Spock into Air Kabikuchi from Fuerteventura is particularly insane and deservedly wins the Best Combo Award. Congratulations Jacopo!

Allthough Felix Volkhardt (Severne/MUF) did not come out of nowhere, he impressed hugely this year, especially in Theologos. The German rider throwing down some insane Air Funnels on the outside and overall impressing the judges with his progress and sailing. Felix is turning heads on and off the water, and if he keeps improving like this he will surely be contending for the top spots next year. Congratulations Felix! Check out a quick edit with some of his best action here:

Even though style is often a personal preference, the judges had no trouble in appointing Tonky Frans (JP-Australia) as the 2021 EFPT Awards Stylemaster. The Bonairean, who also became European Champion in 2018, has been on the freestyle scene for a while but still impresses with his fresh style to this day. Congrats Tonky! Check out this video from Kuma Movie to get an idea of his creativity on the water:

The best video part for a rider is awarded for the video that shows some of the most radical freestyle windsurfing on the planet. Want to show what is possible in this sport to a non-windsurfer? Make sure to show them “REALIFE” by Sam Esteve, who is awarded the best video part for a rider at the 2021 EFPT Awards. Showing off his skills around the spots of Leucate, the then still 17-year old throws down some of the most radical power moves ever seen. Congratulations to Sam who says “I did this video when I first entered the PWA World Tour. My friend Romain, who is also a really good freestyler, wanted to do a video with me so we travelled around all the spots in Leucate. After each filming session we also shared a windsurf session together there, which was sick!”

The final award goes to “Mowgli the Windsurfer” produced by Guy Briche & Alex Stamataris. The video features Lennart Neubauer (Starboard/Severne/MUF) who talks about his life as a professional freestyle windsurfer. This video exhibits some impressive production value, sick action by Lennart and great storytelling which prompted the judges to award it with the Best Video Produced Award.

Apart from announcing the winners, the 2021 EFPT Awards were also a moment to look into the future of the tour. The biggest changes for 2022? We are expanding to other continents! 2022 will see the addition of the American Freestyle Pro Tour with two events on the provisional calendar: one at the beginning of the year in El Yaque, Venezuela, and one at the end of the year in Jericoacoara, Brazil. The creation of the AFPT, which is set to expand in 2023, requires an overseeing structure to combine with the EFPT, and so the Freestyle Pro Tour is born. The FPT is our effort to create feeding tours for the PWA World Tour, whom we work closely together with, from multiple continents. It is not just about the grassroots of freestyle competitors, it’s also the grassroots of event organisers, a place where they can build their events up through a number of years and eventually become a potential World Tour stop should they be keen to do so.

This leads us to arguably the most exciting announcement of the Awards, the 2022 provisional Freestyle Pro Tour Calendar: 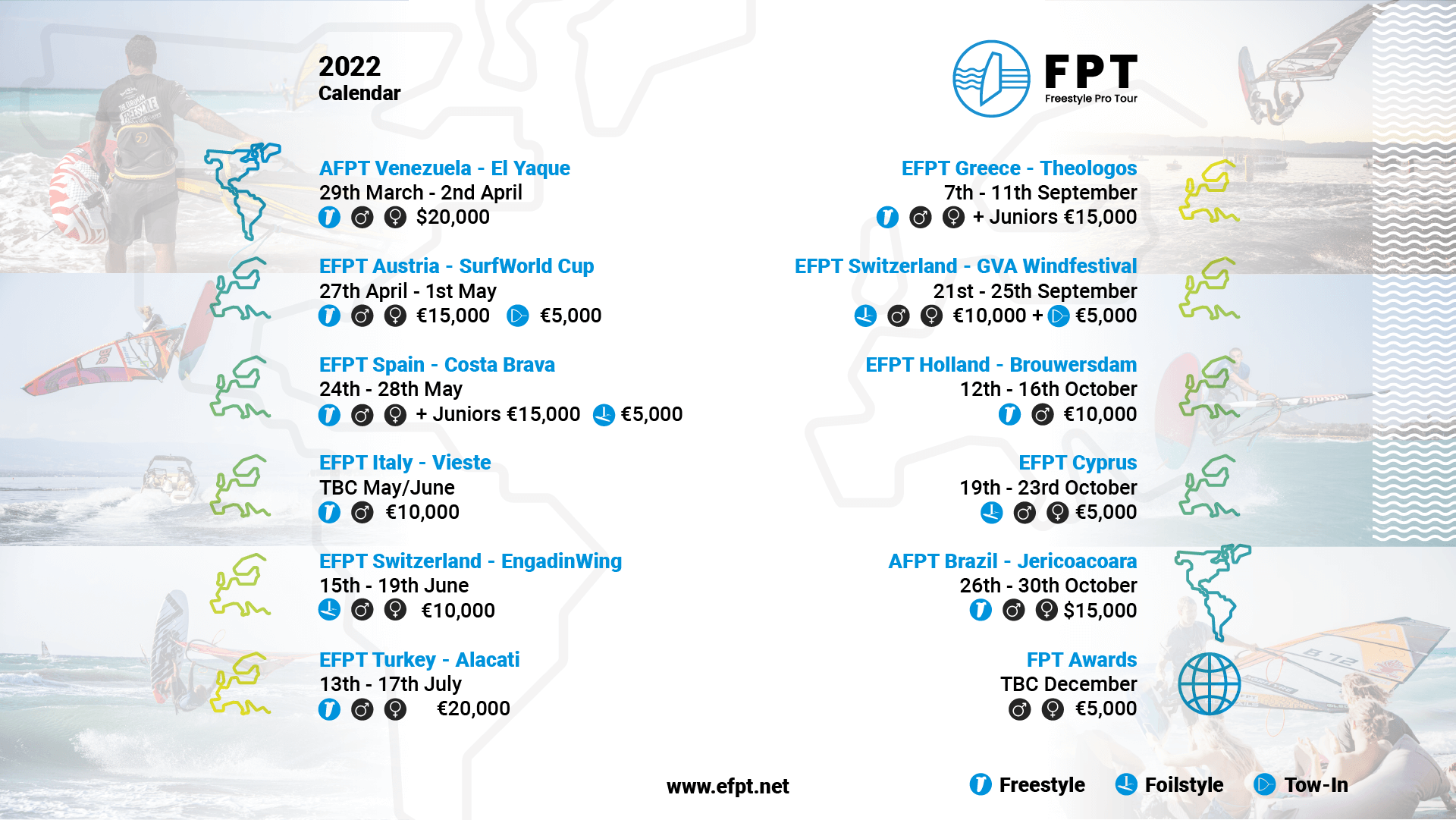 I’m excited for what 2022 has to hold, I can’t wait to see what this coming year has to offer, where our top guys and girls in this sport will take the level to, what new title will be crowned, new moves the will be stuck, who will walk away victorious and all the drama in-between. Of course this will all be wrapped up in the 2022 FPT Awards at the end of the year, so stack up your clips, your moves and submissions, because the entries for that are already open.

And with that we would like to officially close the 2021 season! We would like to thank all the event organizers for their efforts this year, all the riders for their commitment to the sport and bringing us the action, as well as all the brands for their support. Despite a difficult year amidst the pandemic, the FPT team is proud to still have brought you the best that freestyle windsurfing has to offer! It’s now time to turn our eyes towards 2022. Don’t forget to take your camera along the way as submissions for the 2022 FPT Awards will be opening soon already!