An epic forecast, the crowning of the new EFPT champions, a carbon neutral event, the big five years anniversary and windsurf action from dawn til dusk for pros and amateurs – the countdown for DAM-X 2019 is on!

An insane forecast promises an explosive showdown at the final EFPT stop in Brouwersdam. Whilst the event has it’s 5th anniversary in 2019, the Zeil and Surfcentrum Brouwersam has been hosting the EFPT final for the 4th consecutive time. This year guarantees to be a special one, as one of their own, Yentel Caers, has been claiming both – the World and the European title of 2019. Caers had been dominating event after event that he entered and could already secure the overall win at the EFPT in Lanzarote, being too far ahead for any other rider to catch up. Since the worst result, of the four EFPT events attended will be discarded, the race for the remaining overall results will be exciting. Jacopo Testa (RRD/RRD), who had an epic season on tour, sits comfortably far ahead of the pack and will claim Vice-European Champion 2019. 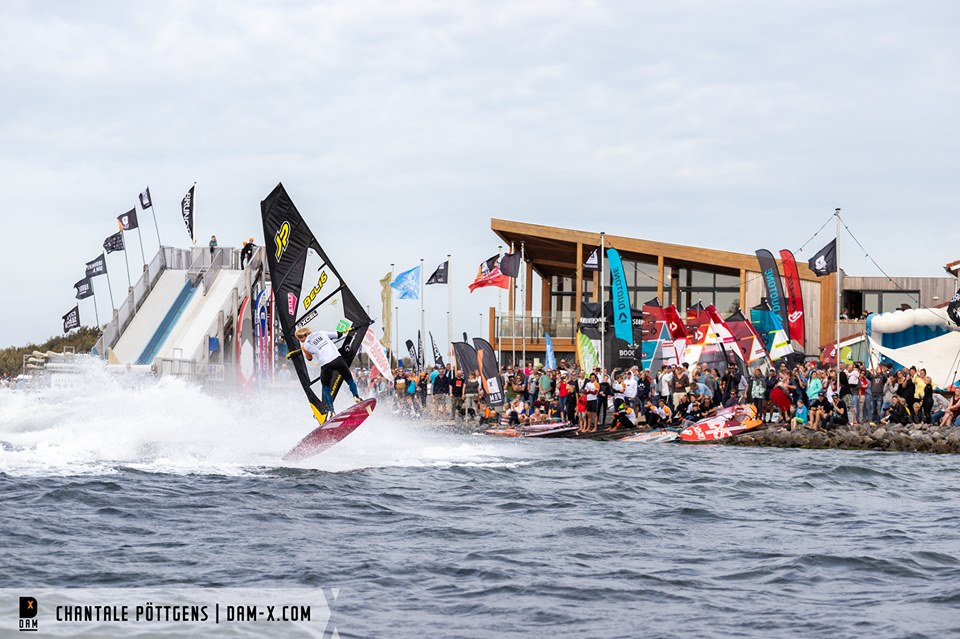 Yentel Caers in front of the 2018 crowd

The third podium position however is still wide open. Dutch sailor Davy Scheffers, who won the DAM-X in 2018, holds the third place overall at the moment but has top Italian rider Giovanni Passani close at his heels. Also Steven Van Broeckhoven (Gunsails/Starboard) and Antoine Albert (Goya/Goya), who only attended two events so far, but are sitting in 5th and 6th place respectively are still in the game to mess up the podium dreams for Scheffers. Mattia Fabrizi (Patrik), who is ranked 7th after two attended events might also still have the chance to grab the third place, depending on the results of the riders ranked ahead of him.

Alongside the race for the overall positions, the battle for the event victory will be in the spotlight, since apart from the riders named above, also big names like Adrien Bosson (Duotone/Fanatic) and Taty Frans confirmed their presence at this years DAM-X. 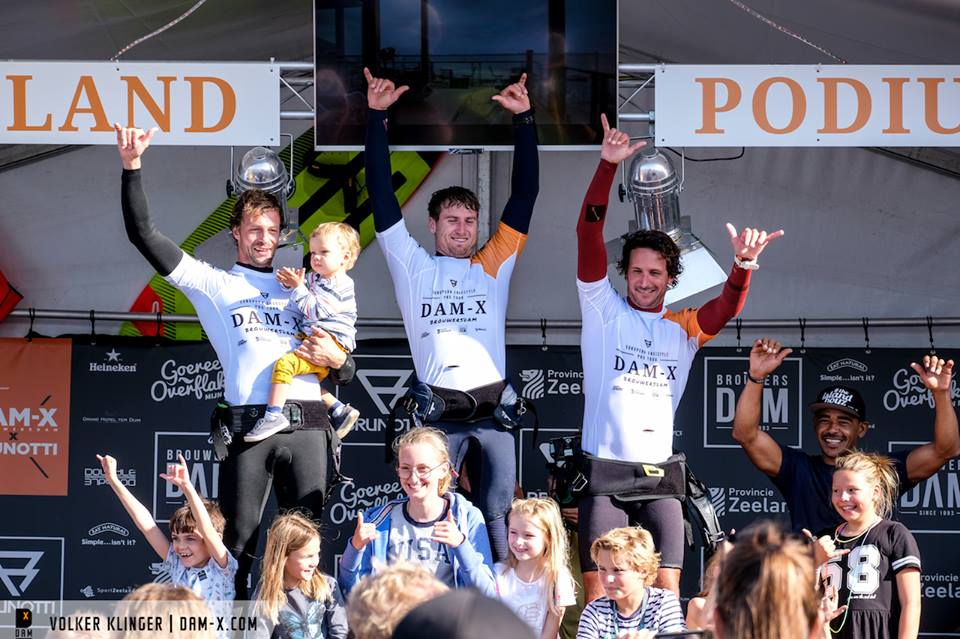 The organisation team of the DAM-X has always put a huge focus on the new generation and were also the first ones to organise a U16 and U18 junior competition alongside the pro men and women. Leading the U18 division is French junior Nil Bacon Aubert, who impressed with some highclass heats in the junior as well as the pro fleet. So did Eugenio Marconi, who is chasing Bacon, to defend his U18 EFPT title of 2018. Both of them will have to watch their backs since currently ranked third, Stefan De Bell (Patrik) from Curacao, has the skills to make it to the top as well. 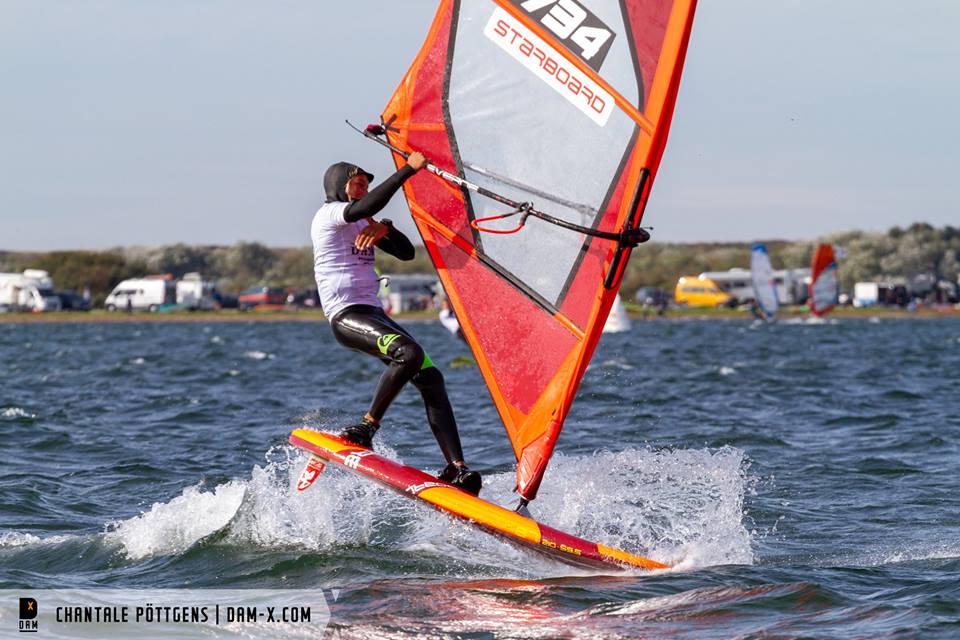 Leading the U16 division is Lennart Neubauer

The U16 is led by freestyle talent Lennart Neubauer (Starboard), who is definitely ready to take home the title this year, after claiming U16 Vice European Champion in 2018. Currently ranked second is Tigo Kort (JP), a Brouwersdam local, followed by Bodhi Kempen (Starboad) in third place. The young Dutchies showed some serious potential and skillset that has been improving over the past years, but will clearly have a hard time to get past Neubauer.

Top sailors of the ladies fleet are Vice-World Champion 2019 and European Champion 2018, Maaike Huvermann (Starboard) and Arrianne Aukes (Duotone/Fanatic). Huvermann will have to defend her title against Aukes, who had another great year on the PWA finishing in 4th place overall. Supertalent Lina Erzen (Duotone) from Slovenia, who is only 14 years old, will be in the game with the pros. Since Sarah-Quita Offringa (Starboard/Neilpryde) and Oda Johanne (Starboard) won’t make it to DAM-X this year, we’ll see the podium getting mixed up by the young guns like Erzen and Saloumé Fournier (Sailloft) who will also be joining the pro ladies alongside Brouwersdam locals Margo Kurvink (JP/Neilpryde) and Sterre Meijer (Starboard). 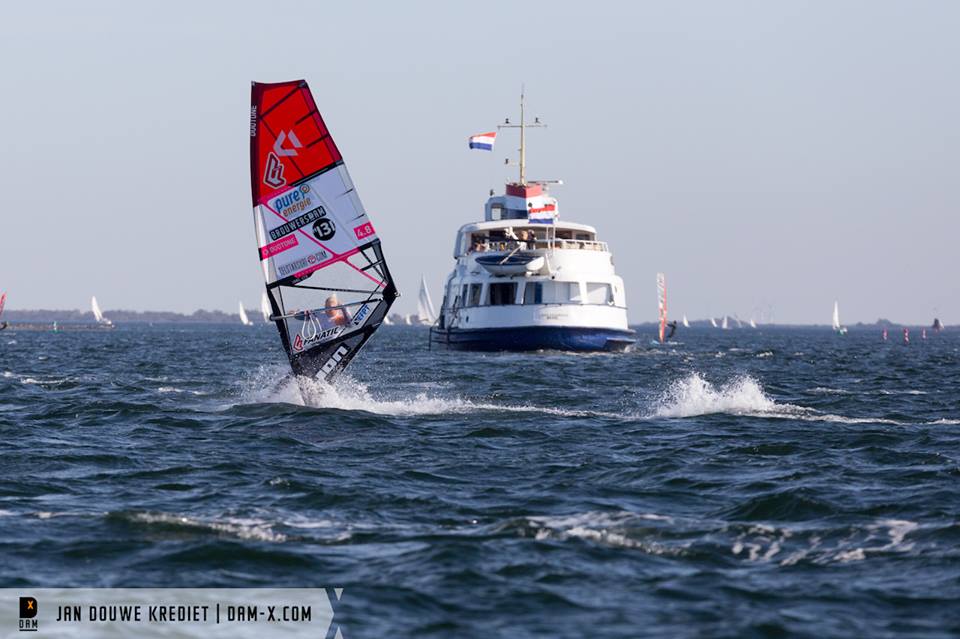 Arrianne Aukes throws an Eslider in front of the ferry

We are very happy and proud to be working together with Starboard on making the EFPT events carbon-neutral, by planting mangroove trees according to the amount of emissions that the crew and riders produce in order to reach a tour-stop. The goal for 2020 is to make the whole tour carbon-neutral and we started off with certain events this year.

The DAM-X will be the first event we’ll try to make completely carbon neutral, by evaluating emissions of riders, EFPT crew and local crew. We are very fortunate to work with Starboard and the DAM-X crew on this project, who have always been very environmental friendly. This means: only re-usable bottles for water for the riders, no plastic boxes for the lunch and organised beach clean-ups just to name some of the actions. If you want to find out more about the Starboard Blue projects please head to: https://blue.star-board.com/mangroves/ 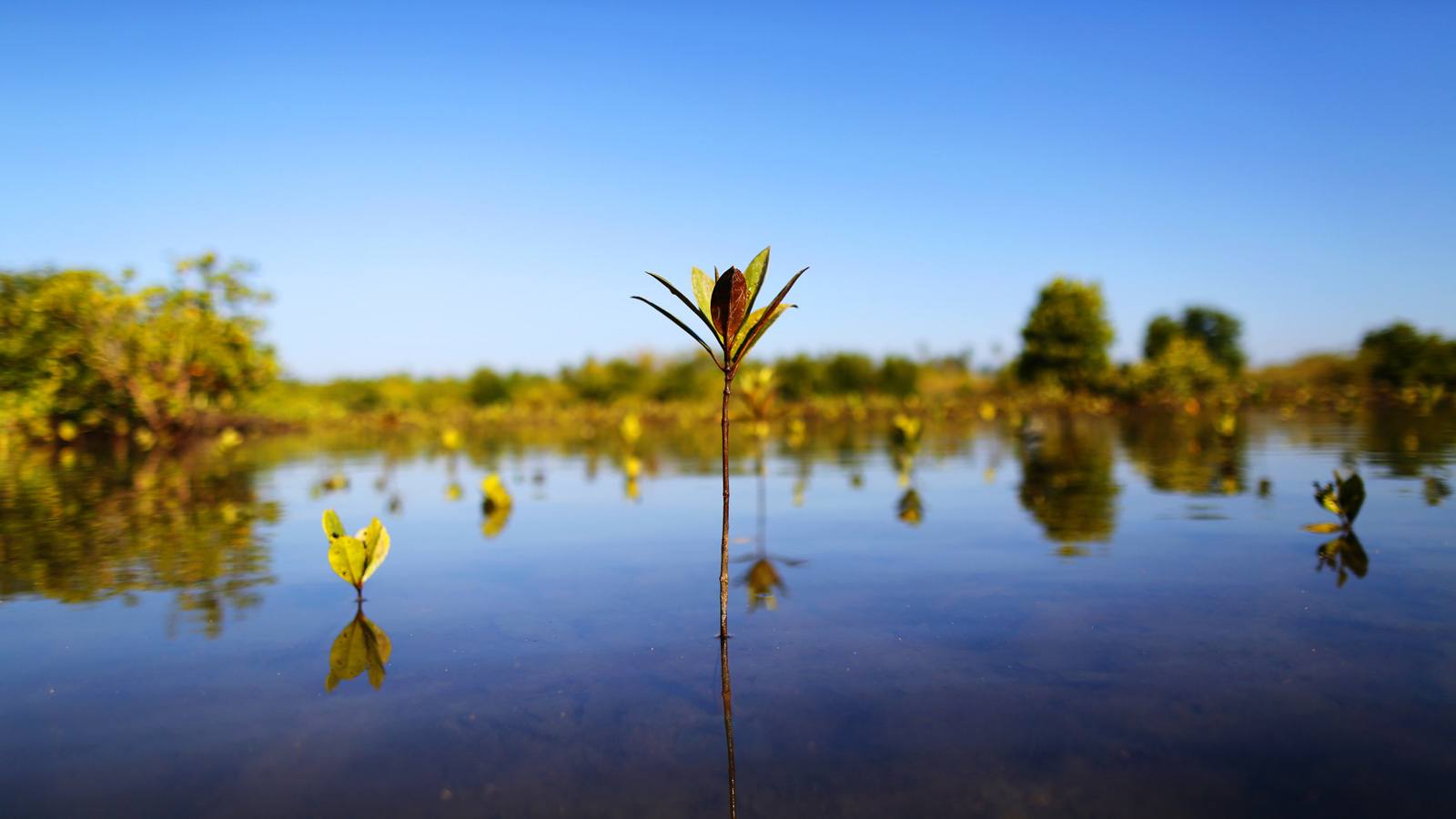 We also try to set an example with the EFPT overall trophies. Also this year, they are hand-made out of local and sustainable wood – all grown, processed and produced in Austria.

We are looking forwards to another exciting showdown of the EFPT and can’t wait to finish this season with a big bang, with the wind charts being dark pink to purple. All windsurfers know what this means – get your small sails out boys and girls, it’s going to be epic!