It is the 6th consecutive year that the organisation team around the Pro Center Antxon Otaegui and the Teguise Water Sports Association brings stop of the European Freestyle Pro Tour to the shores of Lanzarote. Every year the team has been creating an event FOR the riders, trying to make their stay on the island as pleasant as possible – the consistant north-easterly trade wind and the bump and jump conditions around the reef, played their part and made the EFPT Lanzarote a favorite for the sailors.

19 pro riders and eight juniors signed up at todays registration, with four juniors entering also the pro fleet. We are delighted to see such a high attendance of young-guns that made it possible for us to run both divisions today: U16 and U18.

Costa Teguise did not disappoint and delivered suitable conditions from the early morning hours onward. The first heat hit the water just around lunchtime. The riders have been on their 4.4s and 4.8s, sailing ten minutes heats with three moves counting each tack.

Going into this event as big contenders have been tour-leader Yentel Caers from Belgium, who is also the winner of last years event here, Jacopo Testa (RRD/RRD) currently ranked second overall, winner of 2017 and Adrien Bosson (Duotone/Fanatic), who was placed second in the EFPT Lanzarote 2016 and 2018. Also Steven Van Broeckhoven (Gunsails/Starboard), Antoine Albert (Goya/Goya), Antony Ruenes and Giovanni Passani shouldn’t be underestimated at this spot that requires a lot of technical freestyle skills but also experience in jumping. 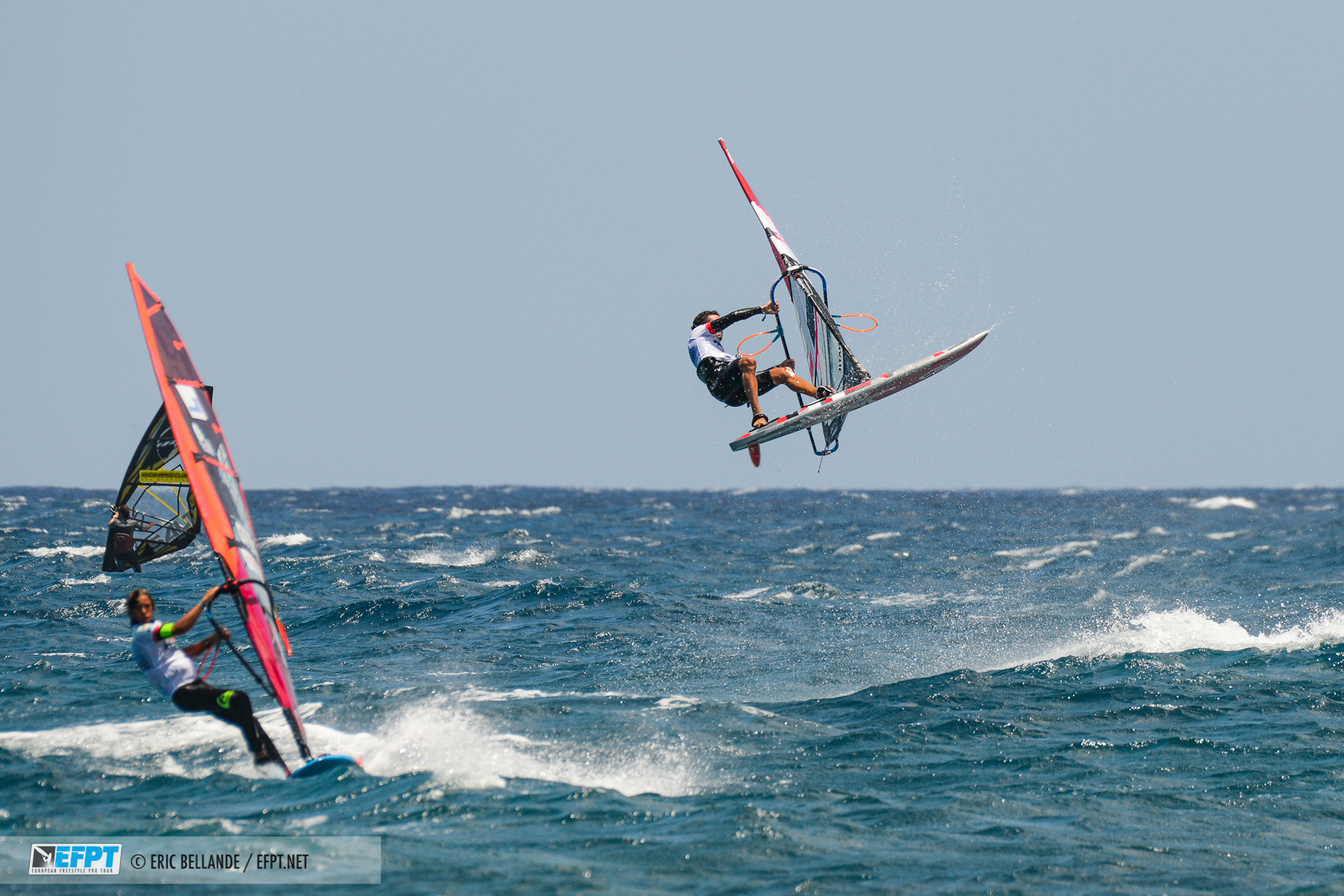 An early upset today has been caused by 15 years old Starboard team-rider Lennart Neubauer, who took out Dudu Levi (Gunsails/Starboard) in the first round of the single. Neubauer put together a solid heat, scoring over 30 points. In the second round however, Belgian freestyle superstar Steven Van Broeckhoven stopped the kid from Greece. Even though Neubauer pulled a clean no handed burner on the buzzer, yet it wasn’t enough to compete against powerful moves Van Broeckhoven marked down on his judging sheets. 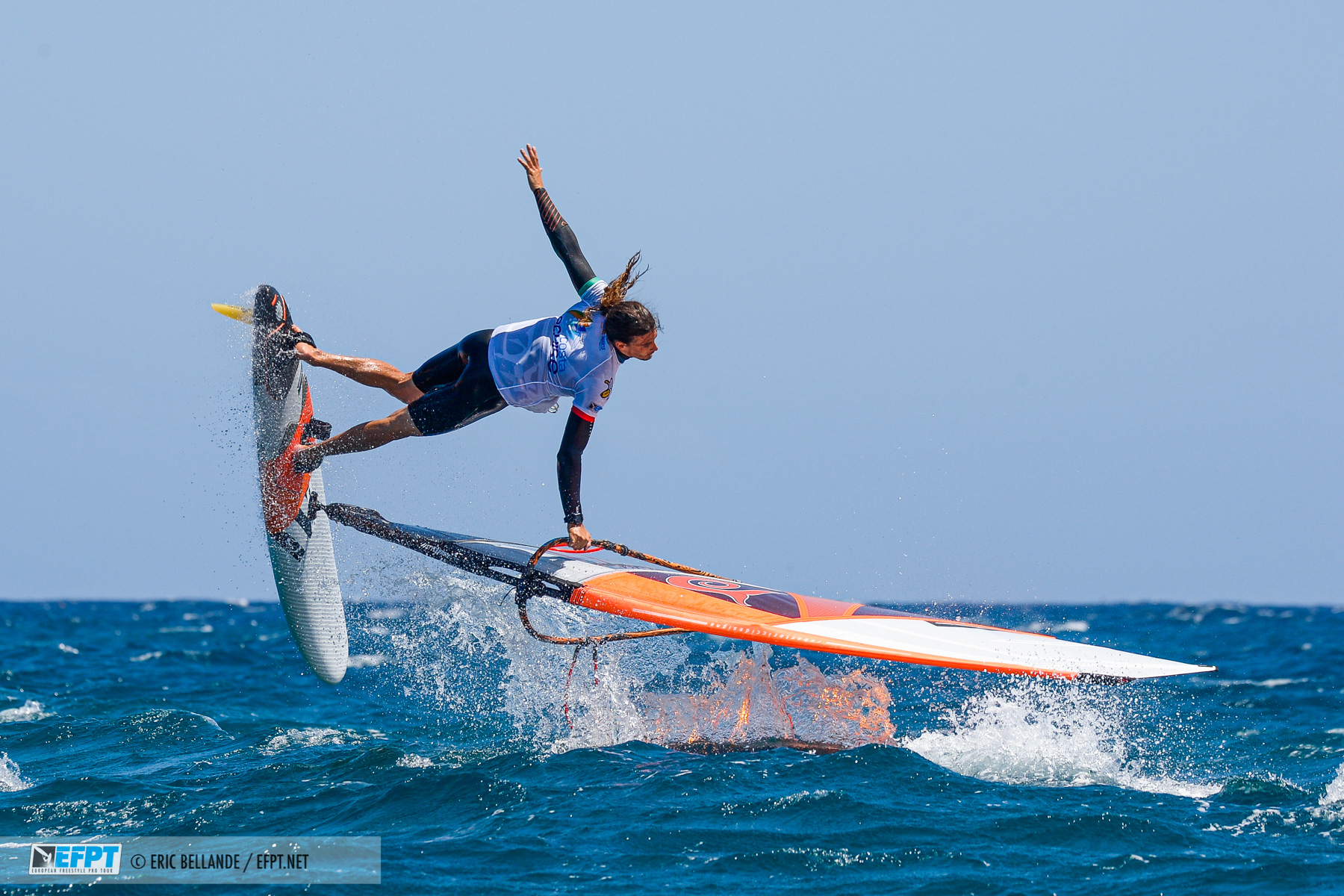 Jacopo Testa with a one handed burner

Jacopo Testa, who is at Caers heels for the overall title in 2019, was sailing powerful and stylish, proving how much conditions like those suit him. Testa took out Marco Vinante (F2) from Italy, Antony Ruenes from France but failed passing Yentel Caers, who sent the Italian straight to the losers final, where he had been defeated by Antoine Albert. The New Caledonian claimed third place in the single elimination. 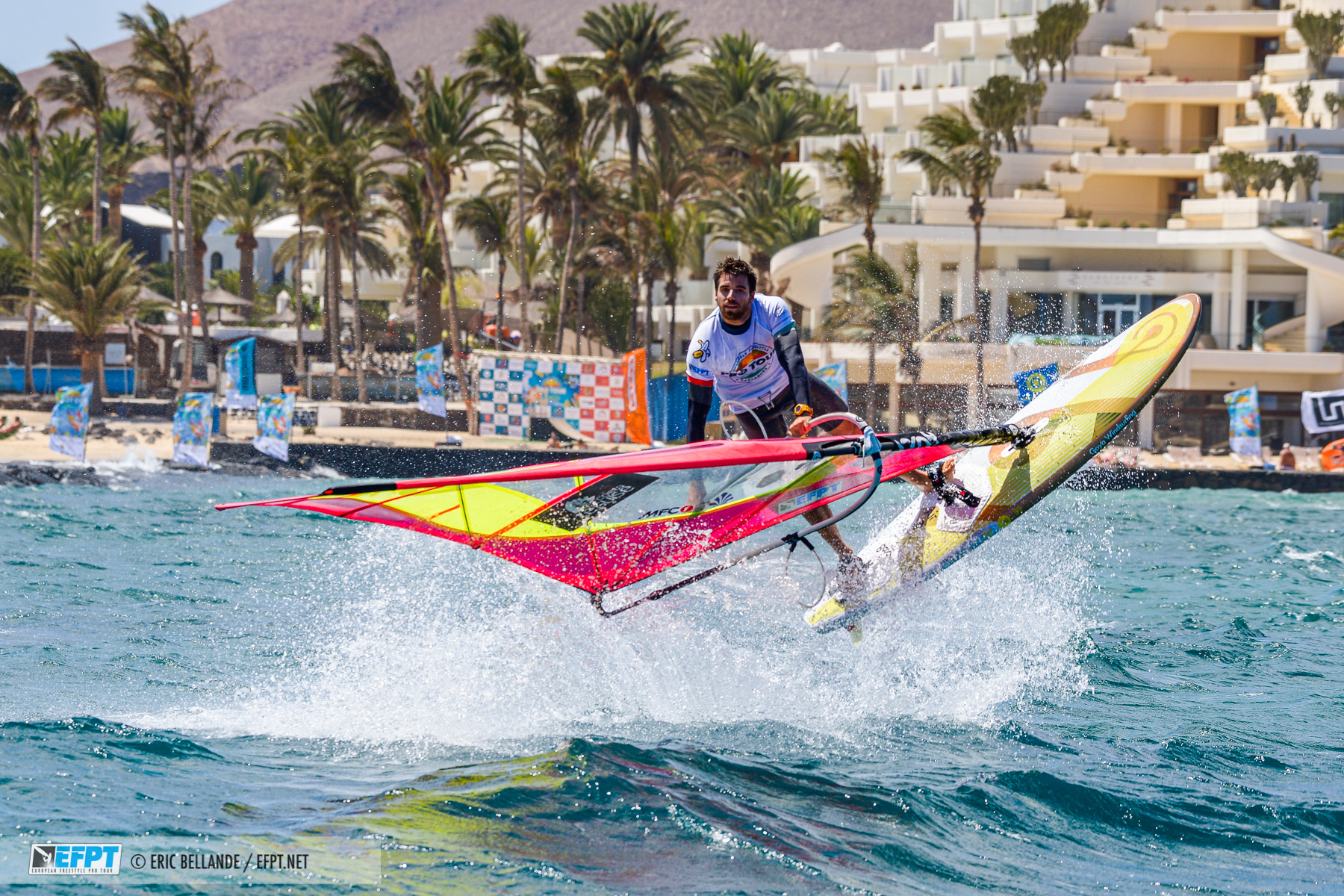 Caers was a force of his own today, starting with a tough draw against former world-champion Kiri Thode from Bonaire. The sailor from the Caribbean proved that he still had the skills, but Yentel would leave him no chance, advancing by 14 points difference. Next up was young French rider Sam Esteve (JP/Neilpryde). With some perfect scores and a final of 40.65 points Caers didn’t leave anything to chance. 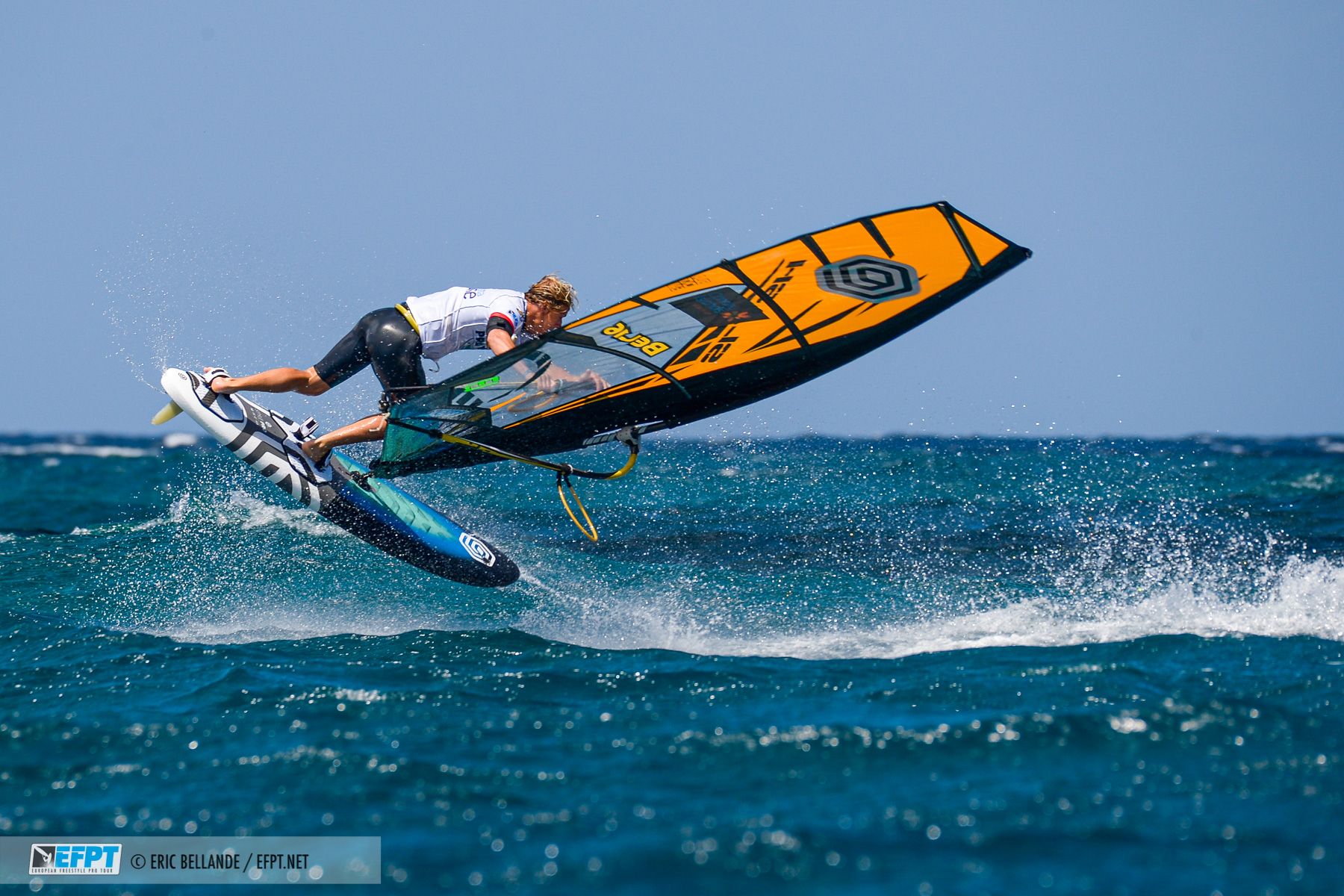 Adrien Bosson marched through the single elimination, despite being on medication against flu and could defeat Israeli Eliran Levi in round one, followed by Steven Van Broeckhoven and Antoine Albert to face Yentel Caers in the final. Bosson was laying down high scoring heats in every round, being both consistant and stylish. Whilst Caers couldn’t get the port-tack score in that he hoped for in the final, Bosson landed an air-bob, a shifty and an air-kabikuchi. On starboard tack the Frenchie scored with a burner, a perfect air funnel burner and a double culo, 39,99 over 35,41 points, that sealed the deal for him today.

It is the first time ever, that an EFPT juniors division is staged at Fuerteventura. Dominating the U16 and U18 category have been Lennart Neubauer and Eugenio Marconi respectively. However, we have seen some amazing young talent on the water today. 15 years old Tigo Kort (Severne), a Brouwersdam local, showed some mad skills and powerful sailing and could take second place in the U16 division in front of Bodhi Khempen (Starboard/Severne), who layed down some decent tricks himself. 11 years old Ancor Sosa, who is the youngest competitor of the tour, was attempting vulcans, bodydrags and even a forward loop in his heat against Khempen. 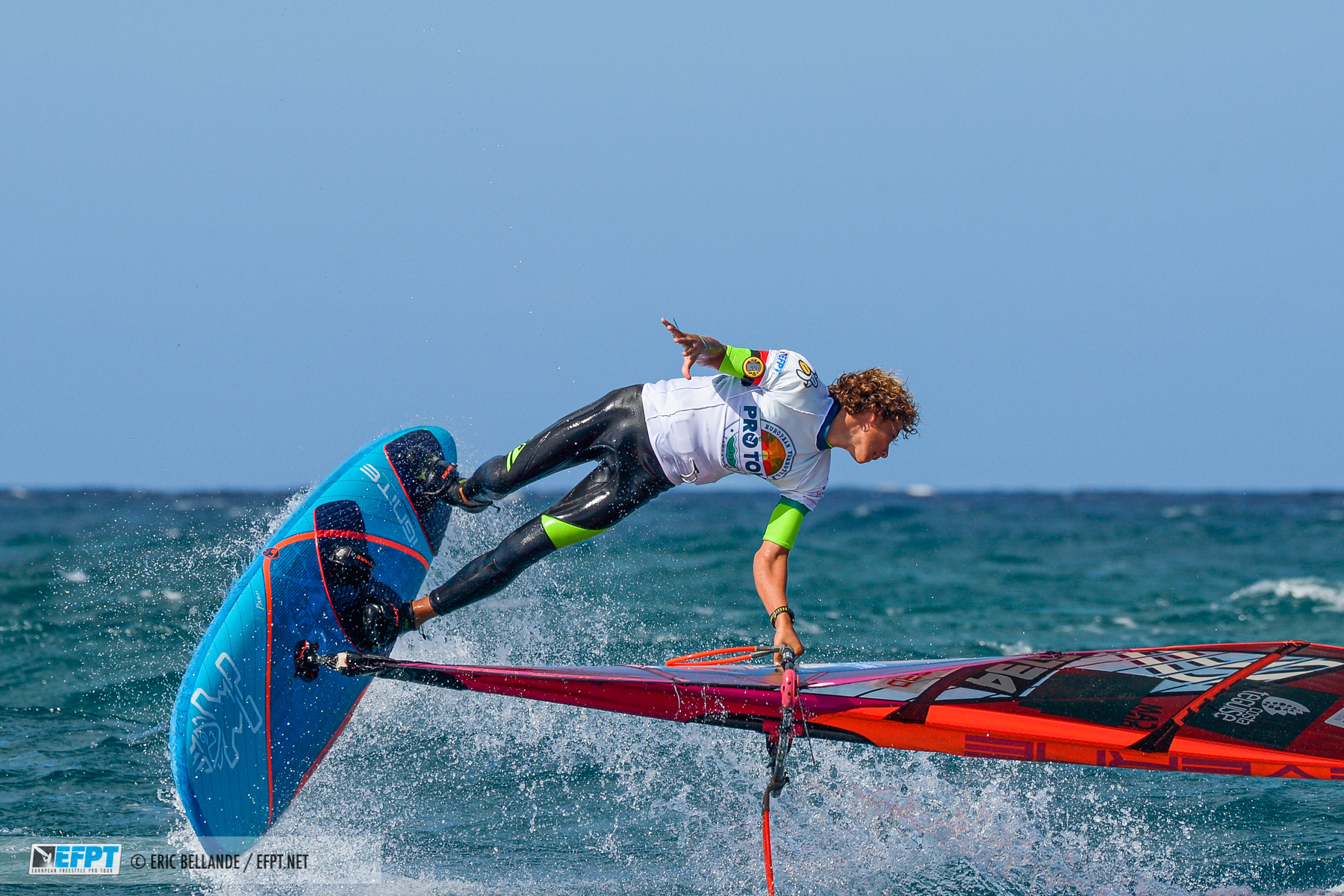 Lennart Neubauer from Greece, performing in the pros & junior division

In the U18 Stefan de Bell from Curacao put on a great fight against Italian Eugenio Marconi, yet had a missing move in the end. Third place in the under 18 division went to Nil Bacon from France, who had his debut on tour in 2018.

It’s so good to see so many young riders entering the EFPT, showing the bright future of the sport.

With a decent forecast for the upcoming days we are looking forward to see all the riders give everything in the double eliminations.