Another victory for Yentel Caers

The foggy weather this morning turned lake Silvaplana into a mystical place, providing yet another atmosphere, one of many that this beautiful place has to offer. With the sun pushing through though, illuminating the turquoise water the arena for the tow-in finals was ready and set around 10.30 am when the top six riders hit the water.

The finalists had three runs each, with the best one counting. With € 4.000,- prize-money up for grabs and a big crowd gathered at the beach, the riders were putting on quite a show – starting already in the warm-up.

Lennart Neubauers progression was visible day by day. The more runs the young Starboard rider had, the better his moves got. Lennart laned a beautiful air burner 360 himself, but couldn’t score high enough to become a threat for the remaining five riders and finally had to settle for 6th place.

Duotone/Fanatic teamrider and freestyle vice worldchampion of 2018, Adrien Bosson did clearly enjoy his tow-in runs but couldn’t get beyond the 7 point score. The judges awarded his air burner 360 with a 6,69 that would only be enough to claim the 5th place in the end.

The Swiss crowd was going crazy as their local heros layed down some big moves right in front of their eyes. A progression to the qualification rounds in the previous days has been really obvious, with the sailors landing most of their maneuvres super clean. Jeremy Plüss, who looked very confident in qualification already, landed an air burner 360 (7,06 points) to count. Jeremy who is a part time rockstar, definitely enjoyed the excitement of the spectators, cheering for him run after run. Plüss just missed the podium to end p in 4th position. 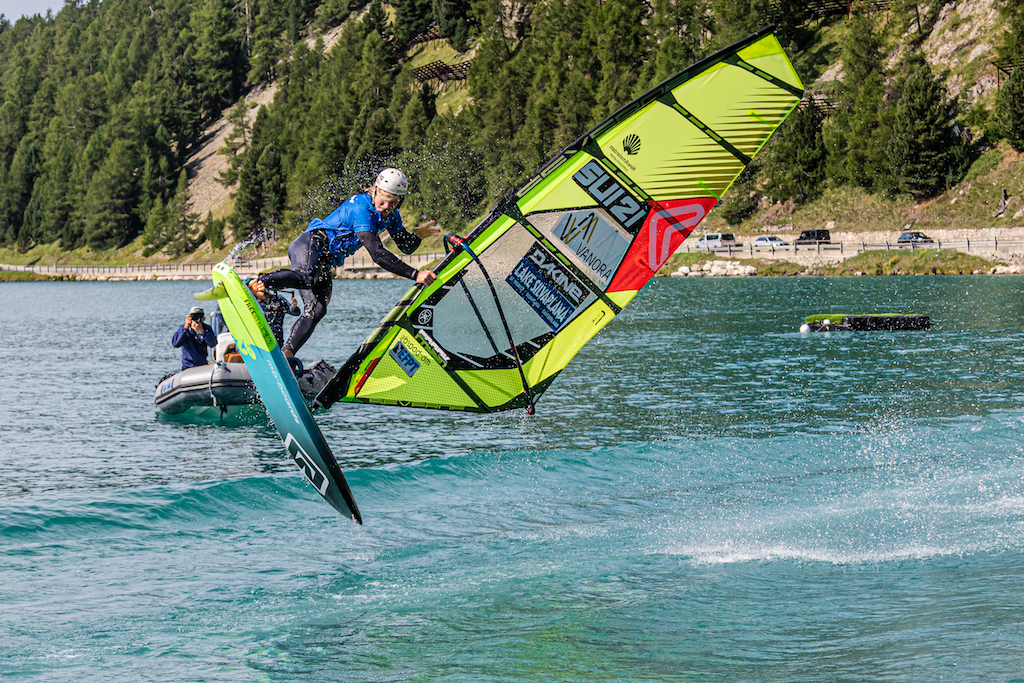 Balz Müller, who is treated like an absolute superstar here on site, didn’t disappoint and sticked an air burner 360 rotation, earning 7,69 points. The Swiss freestyler was furthermore planing out of his air funnel 720 in his second run, but couldn’t score as high due to the lower technical scores of this move. In the end he could claim 3rd place.

Steven Van Broeckhoven (Gunsails/Starboard) who is always one to push in this discipline, took his new Starboard Ignite freestyle board out for a good spin today and went for an air funnel in the flat into burner over the wave of the boat with flawless timing, scoring 8,00 points and claiming second place. 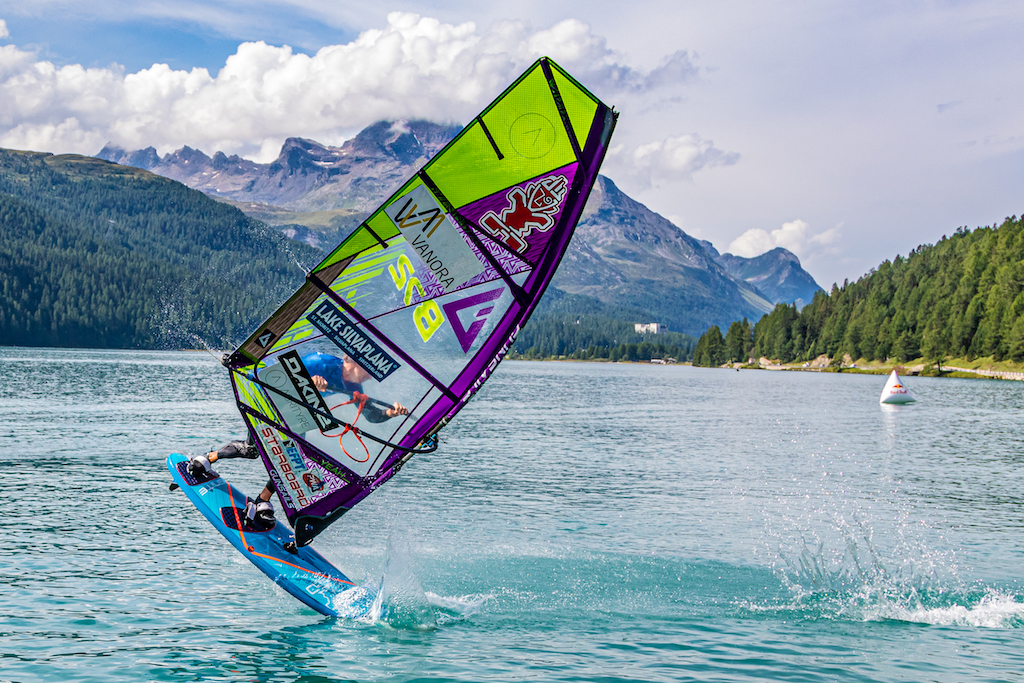 Taking victory here once again is Yentel Caers who seems to be on a winning streak. Caers won all three EFPT freestyle events of 2019 so far, several supersessions and now the King of the Mountain tow-in competition at lake Silvaplana. Caers style is so powerful and his skillset so broad, that it leaves judges, spectators and fellow competitors wowed. The Belgian freestyler, who is also leading the European freestyle ranking, landed a perfect air burner into air funnel – both rotations fully in the air to score 8,94 points. After attempting a double air culo in the qualification round yesterday, the pressure was on as everyone expected him to try again. After having the first place in the pocket already, Yentel went all in on his third and final run and rotated through a perfect double air culo, landing upright on the board but the momentum of the fast rotation pushed him off in the end. The judges honored the style and technical difficulty with 8,44 points. Yentel was deciding on participating in this event last minute, but stated that he was really happy about this win and that tow-in is still all about the fun for him – maybe that’s the big secret. 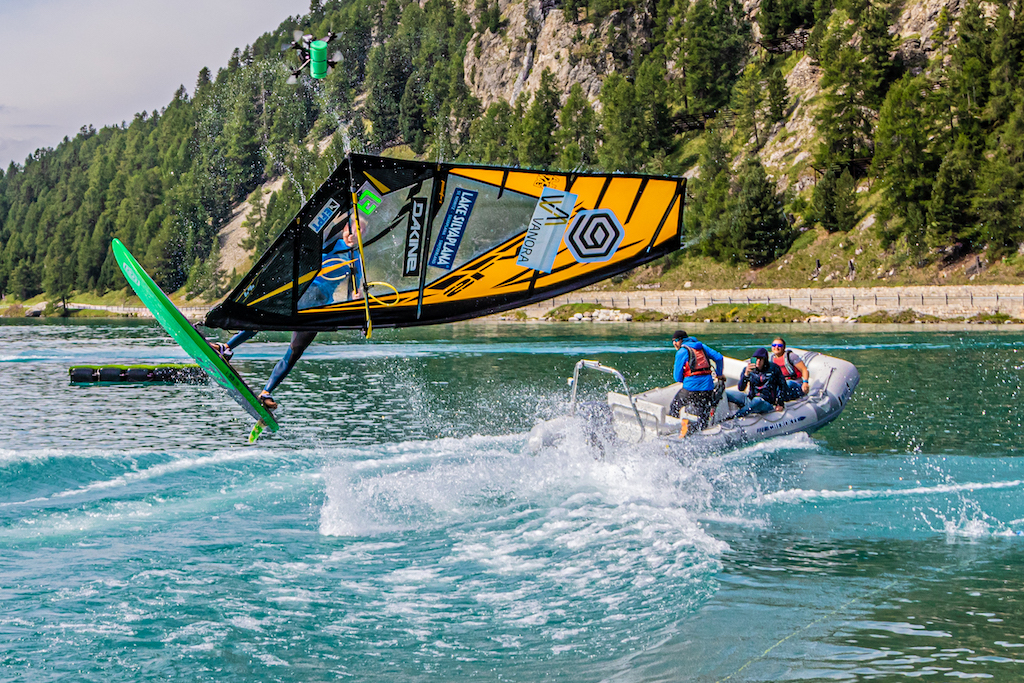 The big prize-giving took place in the evening at the big party tent, honoring the winners of this amazing show over the past days. A supersession is on the schedule tomorrow where we hope to see more crazy moves by our eight freestylers. 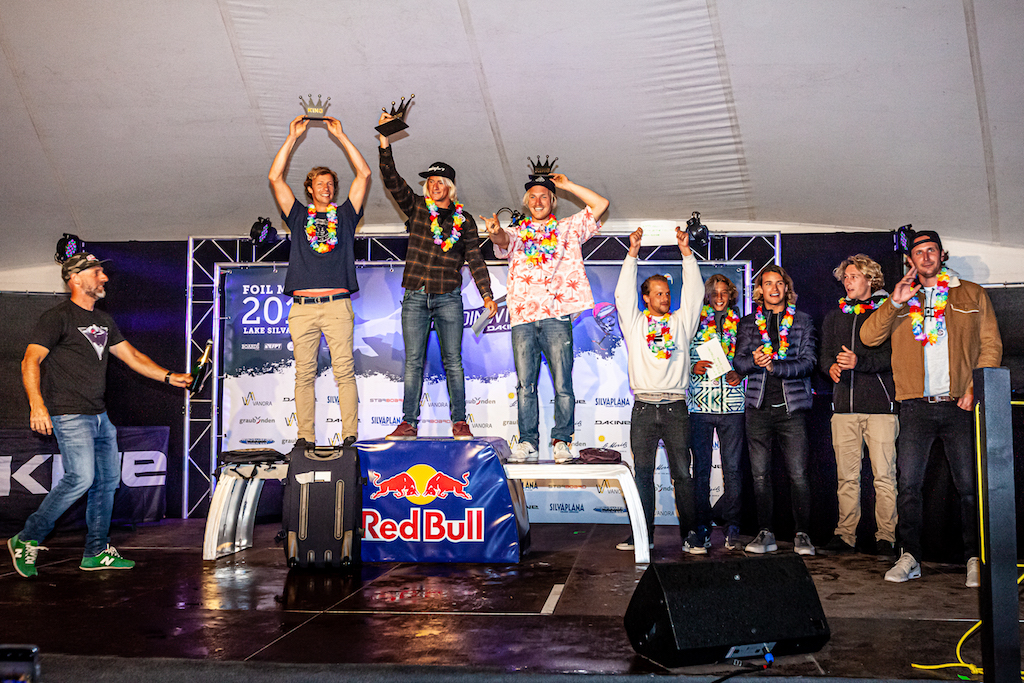 Podium of the Kind of the Mountain (by Emanuela Cauli)