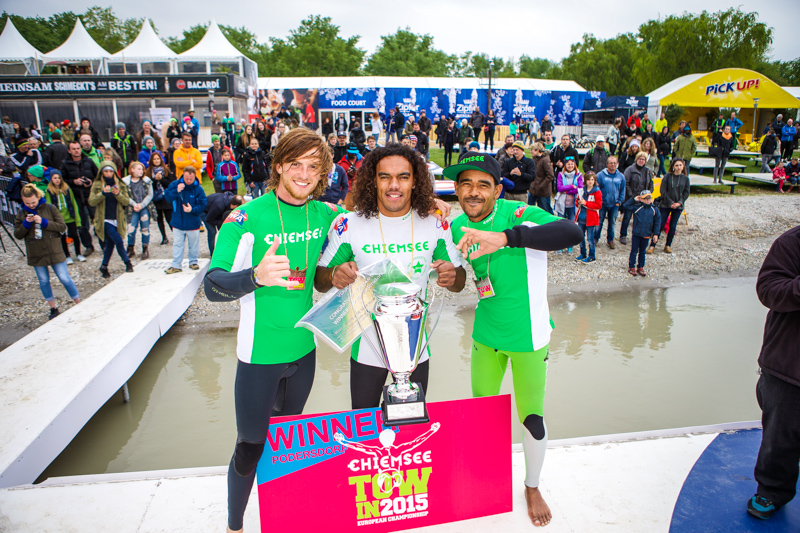 After the whole Saturday was all under the sign of the PWA freestyle competition as riders and crew were trying to make the best out of the conditions and to get a result, the tow-in finals got postponed to Sunday afternoon.

The ten riders who made it into todays final fleet qualified over the last few days in three intense qualification rounds as everyone was fighting for a place amongst the last top ten who would battle for the crown of the European Tow-In Champion as well as 5.000€ prize-money sponsored by CHIEMSEE.

To guarantee a better show and give the riders the chance to risk more, the race crew decided to grant everyone three runs with the best move counting. Five judges scored the moves according to difficulty and style with a maximum of ten points respectively, whilst the highest and the lowest score have been eliminated.

Already after the first few riders finished their runs, it became obvious how high the level was and how well deserved the sailors got into final top ten.

Adam Sims opened with a very stylish and clean double spock with a perfect landing that scored him 48,5 points straight-away. Kiri Thode topped this with a powerful double culo that was seen for the first time in the European Tow-In Championship. It was honored with 53 points which is also the highest score of this whole competition. Julien Mas impressed with an air-bob into bob whilst Gollito Estredo and team-mate Max Matissek were showing flaka-shaka-flaka combos, making the most out of the light brise on the glassy lake and scored 47 and 42,5 points respectively. Tonky Frans who used to impress with more unusual tow-in moves flew through a super high skopu where he couldn’t quite make the whole rotation but he could win the sympathy of the crowd, that cheered like crazy for the Bonairean. Also Antoine Albert from France who entered the final as the lucky loser managed to pull a decent half-skopu and 43,5 points.

Davy Scheffers and Marco Lufen (JP/Neilpryde) tried their luck with double funnel combinations but didn’t manage to position themselves in the top half of the field.

The two top scores by Thode and Sims from the very first round could not be beaten until round three when Tonky Frans landed a beautiful burner 540 rotated mostly in the air.

The final result of the 4th Chiemsee European Tow-In Competition:

For the first time in four years we now have a new European Tow-In Champion: Kiri Thode from Bonaire, who has a Dutch passport and can therefor legally be European Champion managed to convince the judges with his skills and takes the crown of reigning tow-in champ Steven Van Broeckhoven (JP/Neilpryde) who stayed unbeaten in all those years but decided against a participation this year due to an injury. Apart from the prize-money and an amazing thropy Kiri won three weeks in Sri Lanka for himself and a second person, sponsored by the Da Silva Surfschool (www.surfschool-srilanka.com).

All three top positioned riders were more than stoked about their results and we all can’t wait for the next edition of the Chiemsee European Tow-In Championship in Podersdorf 2016!