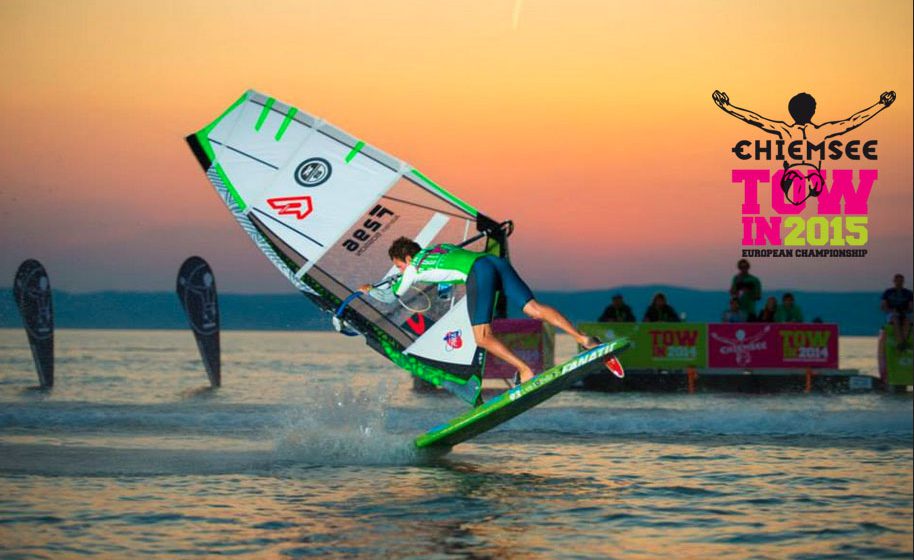 The Chiemsee European Tow-In Championship will take place for the fourth time at the Surf Worldcup Podersdorf, Austria from the 30th of April through to the 2nd of May 2015. In 2012 the brand Chiemsee began the movement of tow-in windsurfing, calling upon the best 30 freestylers in the world to show their moves in zero wind. Since then thousands of people have enjoyed the show that takes place during the day or night at one of the biggest outdoor festivals of the World.

With 5.000€ prize-money up for grabs it is no surprise that the tow-in discipline has been gaining popularity amongst the freestyle windsurfers who are always in for a good show and who are all keen to fight for the crown of the European Tow-In Champion, which will be awarded during the next days.  So far the current leader of the World Tour, and current EFPT champion, Steven Van Broeckhoven (JP/Neilpryde) from Belgium is undefeated within the European field. Hard on his heels are the likes of Tonky Frans from Bonaire, Adrien Bosson (North/Fanatic) from France as well as Frenchie Julien Mas (JP) and Amado Vrieswijk (Severne/JP). Also local hero Max Matissek (North/Fanatic) and British born Adam Sims (Sailloft/Patrik) are always sailors to watch out for as they regular pay a visit to finals at each event. After the first World Tour stop in Leucate, France it has become obvious how much the discipline has developed. Tom Hartmann, race-director of the EFPT stated:

“We are ready and set for the first EFPT tow-in competition of the year. The fleets are drawn and the worlds best riders are amped for the big tow-in show here in Podersdorf. According to the weather forecast we will try to run the tow-in contest within the next two days and crown the winner in front of a huge crowd. The level seems to have stepped up quite a bit over the winter as we experienced in Leucate last week at the first PWA event. So I am pretty sure we will see some proper action and maybe even some new surprising tow-in moves.“ The qualification will be run in three rounds depending on the weather situation with the first possible start on the 30th and the final on the 2nd of May. Due to the wind forecast for Saturday it is possible though that the complete elimination plus the final will be staged on thursday and friday only.