Crowning of the European Wave Champions

Double eliminations were completed for all divisions of the IFCA Wave European Championships on the fourth competition day in medium to strong winds with waves from 1.7 to 2 meters of height. Thanks to the mobile possibilities during this event, we were able to move to another location further upwind of middles Hanstholm – the Fish Factory – which quickly turned into yet another perfect set up for the judges with all the necessary facilities. It was a down the line wave riding scene with some of the most impressive wave riding action seen on the event so far.

The highlight of the day was during the Men’s heat were we saw the German Leon Jamaer slashing his way through 6 heats with some of the best wave rides seen on that day including high jump back loop rotations, a close call versus his fellow countryman Philip Koster who failed to express the judges during his wave rides as Leon always managed to timed and select the best of the wave sets roiling in. Unfortunately, the winner of the single-elimination the strong Spanish Marc Pare Rico made an end to his successful display of great overall expression with higher jumps, powerful wave riding style and wowing the crowds with a very very perfectly landed high stalled forward loop. 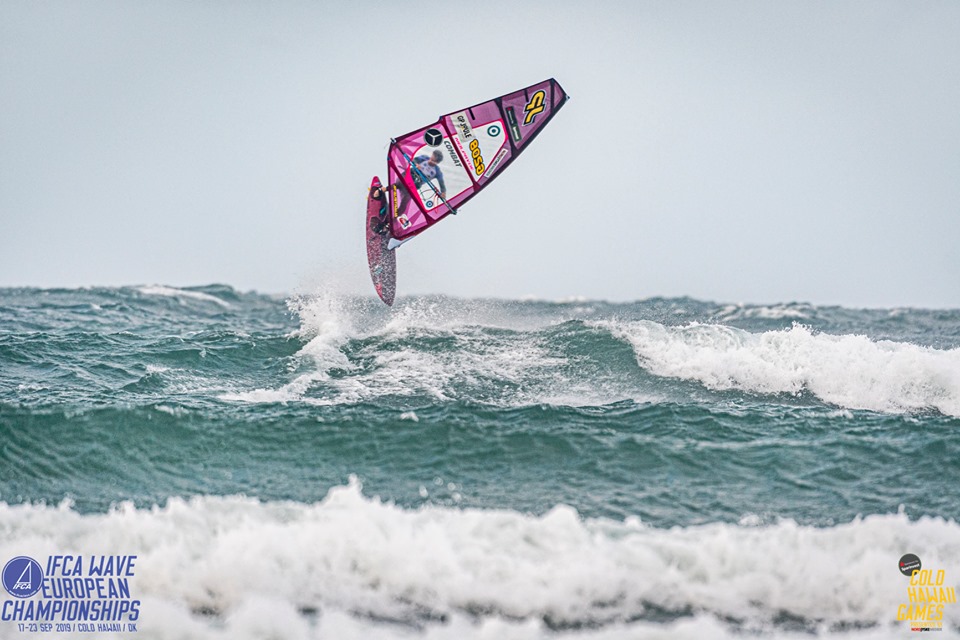 In the womens division the German Lina Erpenstein defended her first position versus the experienced Austrian Uli Hölzl who managed to showcase some powerful top turns but it was Lina who had a fuller score sheet based on the overall impression, that included a nice and clean rotated backloop and higher wave scores as she managed to use every section of the waves, displaying a great show of bottom to top turns.

A special mention for the youth Nick Spangenberg who performed on a high level and showed powerful skills in both jumps and wave riding.

The final result of the IFCA Wave European Championships after the double elimination: