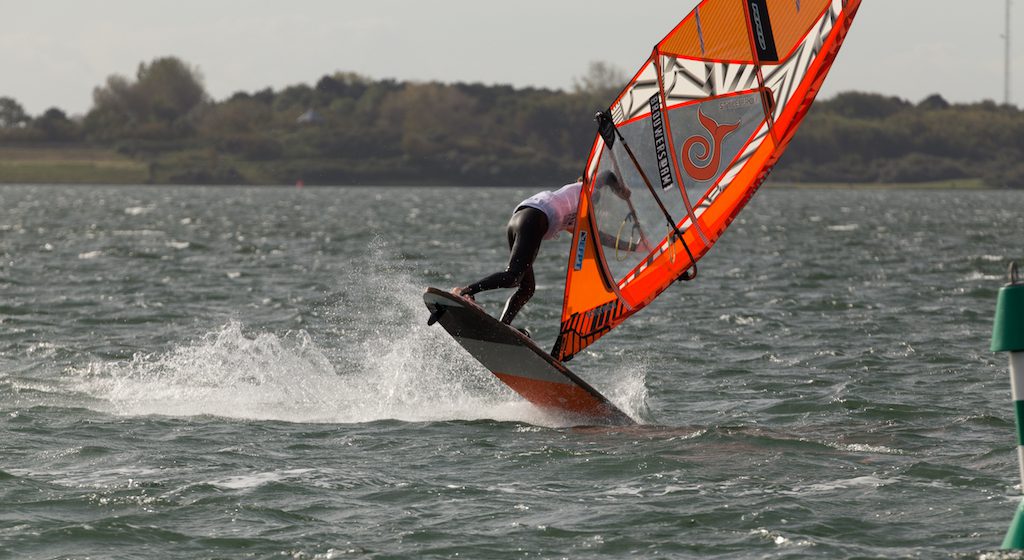 For the third consecutive year, the EFPT is staged at one of the most popular windsurfing spots of Europe: the Brouwersdam in the Netherlands. Already yesterday evening 37 men and eleven ladies signed up for the last freestyle windsurfing event of the season, where the new European Freestyle Champions will be crowned.

It is great to see the development of this particular event over the past seasons and we are especially happy to have such a high attendence of young promising riders, entering an international competition for the first time. Not only did a lot of local kids sign up, we also welcomed rookies from Curacao, France, Ukraine, Slovenia and even the United States.

With a promising forecast, the first heat was on the water by 9.00 am in the morning in front of the brand new Zeil- and Surfcentrum here in Brouwersdam, which is setting new standards and which is exceeding all expectations.

In the first few rounds, we’ve seen some EFPT rookies fighting their way up like Pavel Khomenko (Goya/Goya) and Sten Bremmers (Starboard/Severne) who were showing a decent performance early on. The American Alex Mertens (North/Fanatic), who definitely traveled the furthest for this event nailed shakas, an air flaka, a funnell and a ponch just to name a few moves he put on show against his strong opponent Tonky Frans (RRD/RRD). Local rider and part of the organisation team Rick Jendrusch (Severne) was on fire in his heats against Valdimir Yakovlev (JP/Neilpryde) and Tonky Frans and dismissed one after the other. It seemed like the Dutchie would make his comeback into the top ten after his shoulder injury. In the end hopes were too high by the looks of it, since Jendrusch injured the shoulder again in his heat against team-mate Vrieswijk after dropping a shove-it spock. We wish a speedy recovery and hope to see him fully back in the game in 2018! Giovanni Passani who was one of the best sailors of the day took out Nascimo Fournier (Patrik/Sailloft), Andy Lachauer, currently ranked 2nd of the tour Sam Esteve (JP/Neilpryde) and eventually even Amado Vrieswijk (Starboard/Severne) in a 2:1 decision. The lighter wind conditions definitely favored the Italian rider and he could stomp power and sliding moves on both tacks in all of his heats. He then faced leader of the tour Jacopo Testa (RRD/RRD), who seems to be a force of his own this season. The RRD rider took out Felix Volkhardt, Julien Mas (JP), Davy Scheffers and Antoine Albert (Goya/Goya) on his way to the top. Pointwise, nobody is really at his heels and the European title seems secured for the rider from Sardinia, which might give him some extra confidence. The Italian battle to finalise the single elimination has been an exciting one to watch. Testa was landing a regular chachoo, big kono and culo as well as a spock-culo on starboard and burner, cana brava, eslider and skopu on porttack. Passani answered with konos both tacks, a stylish air-funnell, a culo and a burner just to name a few, but couldn’t succeed over Testa who continued his run for the podium positions and sailed technical heats winning on style and diversity. The top 4 after the single elimination

Similar to the mens fleet, also the ladies fleet saw a few new faces. Eleven girls from six nations signed up to compete at the third ever EFPT ladies division. Lina Erzen from Slovenia, Salomé Fournier from France, as well as local girl Sterre Meijer were keen to make their first contest experiences.

Contenders for the title, after winning it in 2015 and 2016, was once again Sarah-Quita Offringa (Starboard/Neilpryde), the freestyle queen from Aruba. The talent from the Caribbean is chased by local surfer Maaike Huvermann (Severne/Starboard) who is eager to fight for the title, just as freestyle routinier and former Vice Worldchampion Arrianne Aukes (Fanatic/North). The level of the girls seems to be stepping up, as we’ve seen even the youngest in the fleet landing vulcans in their heats. The top three participants were a league of their own, with Sarah-Quita leading the pack. The girls were landing flakas, shakas, spock variations and switch moves proving they are worldclass. At their heels was Alexa Escherich (JP/Neilpryde) from Germany. The 15 years old freestyler showed some clever competition sailing and managed to end up in an excellent fourth place. Worth a mention is also the show that Johanna Rümenapp from Germany put on. Rümenapp impressed with flakas, grubbies, spocks and switch maneuvres in her heat, proving she would be somebody to look out for in the future. The double elimination has been launched straight after the single was finished, since the conditions looked suitable in the beginning. The later it was in the day, the more the wind dropped off leaving the race directory no chance but to call it a day at 6.30pm.

The forecast for tomorrow looks alright and the first possible start is set for 9.30 am.