25 pro riders, 16 juniors and 8 pro women signed up for the fifth DAM-X event at the Zeil- and Surfcentrum in Brouwersdam. The riders that made it to the Netherlands from 13 different nations. The Brouwersdam is one of THE freestyle hotspots in Europe and several World and European Champions ‚grew up‘, where the final titles of the EFPT are awarded year by year.

The wind started to improve throughout the morning and the riders could change down from the big gear to their 4.8s. Heat duration was set to eight minutes with three moves counting each tack. With the judges being seriously strict on the heat area there have been some early upsets. Adrien Bosson didn’t make it into the quarter final after losing against Taty Frans who sailed a solid heat himself. With Bosson missing two moves on starboard tack, he couldn’t take down the Bonairean – certainly not the outcome for the single elimination that the French rider was hoping for. He however hasn‘t been the only rider having troubles with the heat area, that had to be adjusted due to the changing conditions. 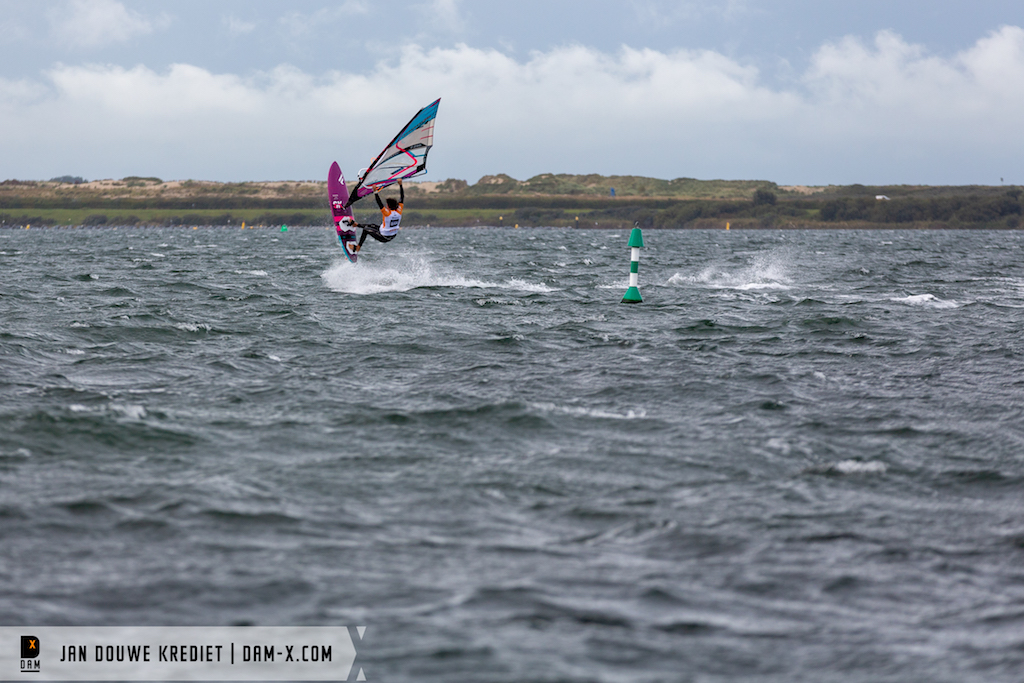 Some of the sailors were a little bit shaken up by the last PWA event in Sylt and travelled to Holland being properly ill. It became obvious in the case of Jacopo Testa who didn’t perform on his level today, but would have had a hard heat anyways, with Balz Müller marking down some great scores. Müller has never entered an EFPT freestyle event before but definitely looked like he was enjoying the conditions at the Brouwersdam.

Sailing some strong heats has been Felix Volkhardt from Germany who is a semi-local at this spot. The German landed an air funnel, burner and skopu to count on port and a shaka, culo and kono to count on starboard tack and stopped Marco Vinante already in round one. When Volkhardt had to face Yentel Caers, he kept his nerves and marked down 26,80 points. Whilst it would have been enough to advance in other heats, World Champion Caers put down the highest scoring heat of the day (38,80 points) and dispatched off the young Severne rider. 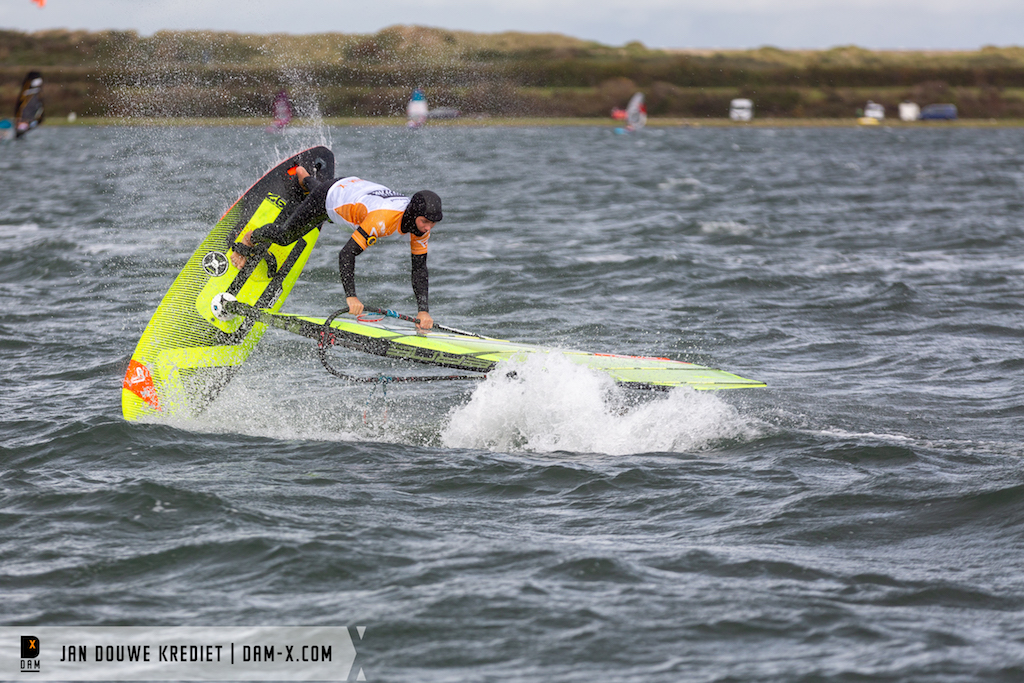 To see the progress of the juniors, who entered the pro division, compared to last year and even the last event was incredible! A special mention goes to local boy Tigo Kort who was absolutely rocking his heat against Yentel Caers. The junior landed a culo, spock and kono to count on starboard and funnel, eslider and switch chachoo to count on port tack! He executed all moves with a super nice style but didn’t stand much chance in the end. 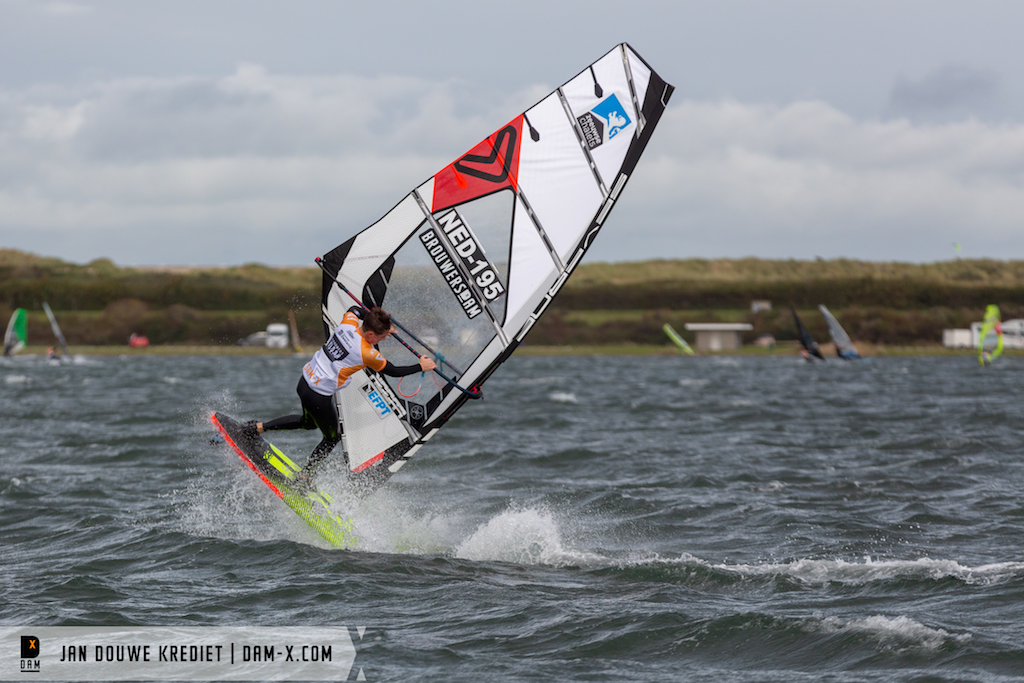 Some more highscoring heats have been marked down by Amado Vrieswijk (38,37) against Bacon Aubert and Sam Esteve (36,74) against Mattia Fabrizi.

The first heat of the quarter final of Balz Müller against Steven Van Broeckhoven was cancelled and restarted twice due to some big weather fronts passing through. The wind remained too patchy to guarantee a fair competition and race director Mark Hosegood called it a day at 06.00 pm.

It’s amazing to see nine competitors taking part in the U16 division and seven entrants in the U18. Some of the riders have already been competing the past years and it’s amazing to see their progress. The Netherlands as well as the Dutch Antilles are well represented in the U16 division. Clappers Gilbert, Patrickson Coffie and Stomp Luka made the long way to the Netherlands to compete in this official EFPT juniors event. From the Netherlands we had local boys Bodhi Kempen (Starboard), Tigo Kort and Tijmen Meijer (JP) signing up. Current U16 leader Lennart Neubauer (Starboard), Ancor Sosa and Erzen Val (Duotone) from Slovenia completed the fleet. Neubauer sailed some impressive heats to advance over Luka Stomp and Val Erzen, to also dispatch off Tigo Kort in the final, claiming victory in his division. Bodhi Kempen made it up from the other side of the draw taking down Patrickson Coffie and Val Erzen in the losers final for 3rd place. It was amazing to see the boys pulling off newschool tricks like culos, burners and konos as well as sliding moves. It seems like the level amongst the young-guns rises as you watch. 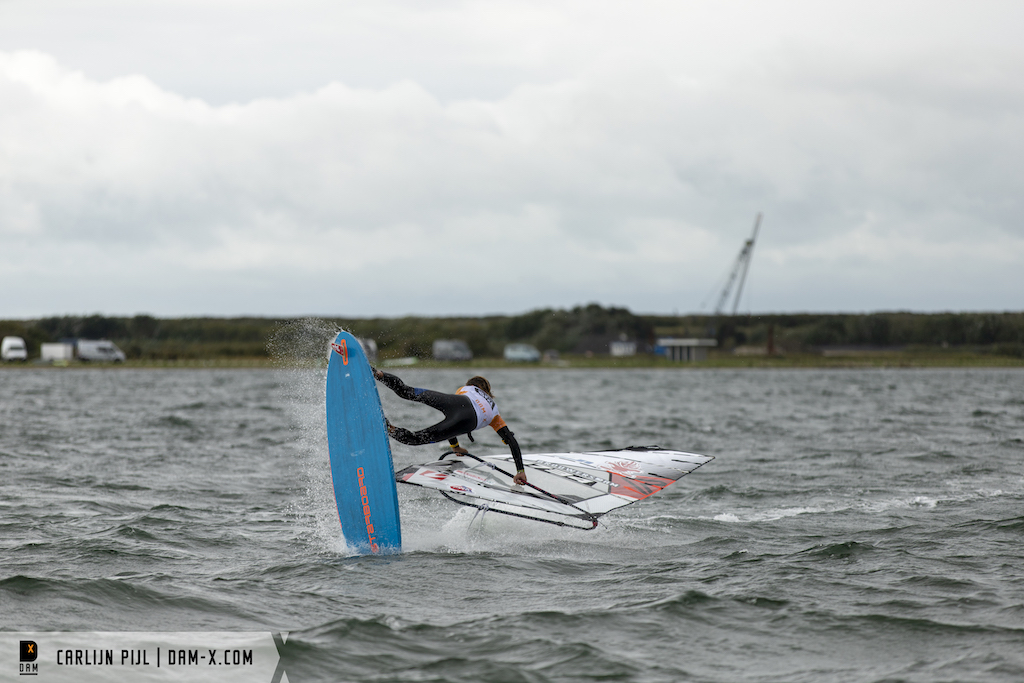 Juniors U18
The contenders for the U18 title of 2019 Eugenio Marconi, Nil Bacon Aubert and Stefan de Bell all showed an amazing performance in the gusty winds of the first competition day. All three juniors gained some serious routine over the past two seasons where they have been competing in the pro as well as the junior divisions. The field got mixed up by Raphael Bauer (JP/Neilpryde) from France, Tim Gerdes from the Netherlands and EFPT rookies Tin Greguric and Lauren Van Liempd (JP/Neilpryde). Italian sailor Marconi was ready to defend his Champion title from 2018 and took down Lauren Van Liempd and Stefan De Bell to now face Nil Bacon Aubert in the winners final. The losers final will be decided between De Bell and local boy Tim Gerdes. With the wind not playing ball towards the end of the day, the final heats couldn’t be decided and were postponed to tomorrow. 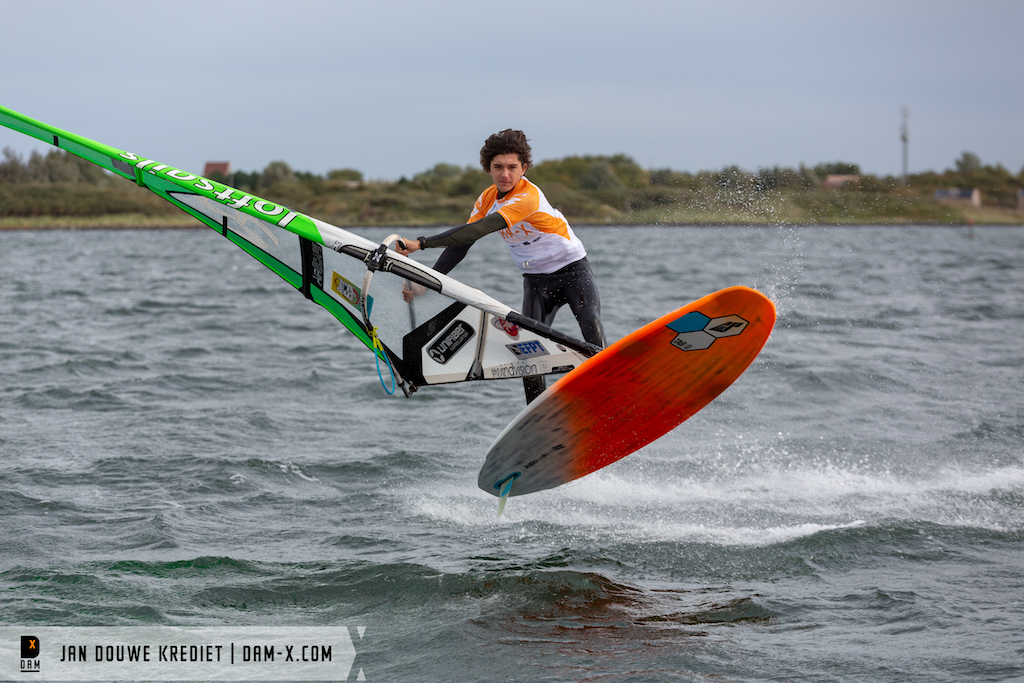 Eight ladies signed up to battle for the € 3.000,- prizemoney and the overall ranking positions of the European Freestyle Pro Tour. Lina Erzen (Duotone) from Slovenia put on quite a show on her Duotone Idol, defeating local girl Sterre Meijer (Starboard). Erzen landed spock variations, flakas and a switch kono proving that she will be one to be looking out for in the upcoming years. In the following heat, Arrianne Aukes (Duotone/Fanatic) took down Eva Wyss from Switzerland by landing shakas, flakas and regular as well as switch stance ducking moves. On the other side of the draw Salomé Fournier (Sailloft) beat Margo Kurvink and Maaike Huvermann (Starboard) took out Lisa Kloster (Patrik/Sailloft) from Germany who just seemed to find her rythmn in the second half of the heat. 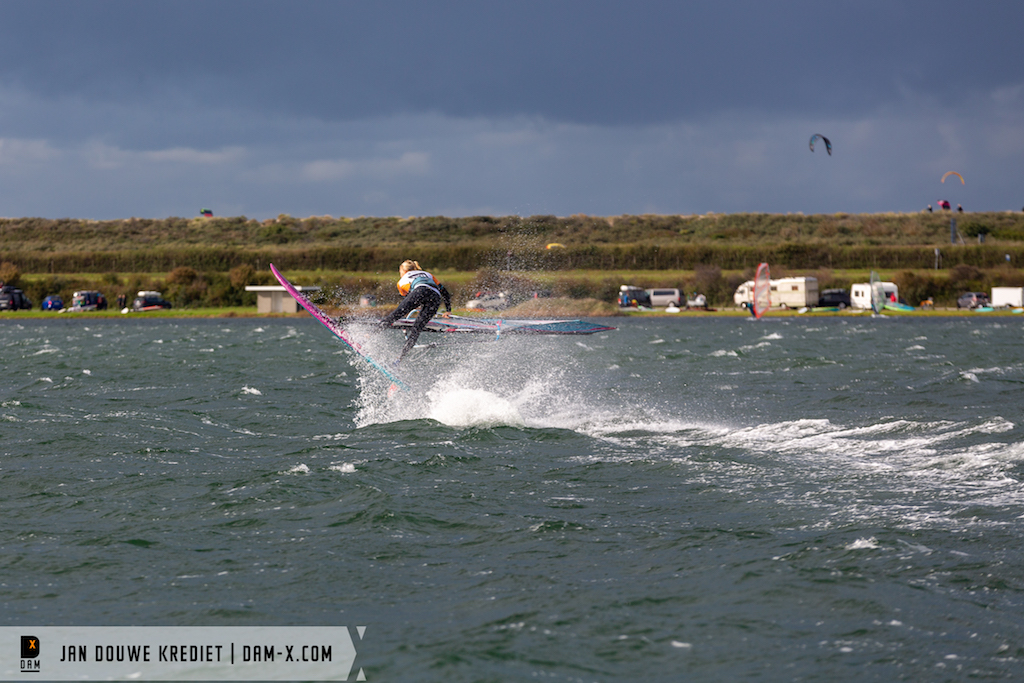 Arrianne Aukes advancing into the semi-final

In the quarter final Lina Erzen will face Arrianne Aukes and French girl Salomé is up against Vice World Champion Maaike Huvermann.

The skippers meeting tomorrow is scheduled for 09.00 am with the first possible start at 09.30 am for the pro division and 09.30 / 10.00 am for the juniors. With a promising forecast we expect some great action in the remaining heats of the respective single eliminations.