With sunny weather and a decent forecast, day two at the DAM-X event saw an early start for the remaining heats of the single eliminations of the respective divisions. The Brouwersdam had been delivering the whole day and no time was lost in also heading straight into the double eliminations.

First heat on the water saw Steven Van Broeckhoven (Starboard/Gunsails) taking on Balz Müller from Switzerland. Since the heat had to be cancelled twice yesterday, due to the changeable wind conditions, Müller decided to take his freestyle foil for a spin. Despite people like Balz being of a huge value for the development of the sport and especially this discipline, he wasn’t officially allowed to compete on his foil. He however decided to stick to his decision, with the result of his moves not being scored. The Swiss rider put on a great show, but Van Broeckhoven sailed his heat as routined as always advancing to the semi-final alongside Amado Vrieswijk (JP), Giovanni Passani and Yentel Caers.

When Van Broeckhoven sailed the semi-final against Vrieswijk, the lighter conditions definitely seemed to favor the Belgian sailor who could advance over the Bonairean. Whilst many people have been expecting yet another exciting final between the two Belgian riders Caers and Van Broeckhoven, Italian Giovanni Passani kept his nerves in the semi-final and advanced over Caers to then fight against Van Broeckhoven for the victory of the single elimination. Even though the Italian sailed well and smart, he couldn’t beat the multiple European Champion. 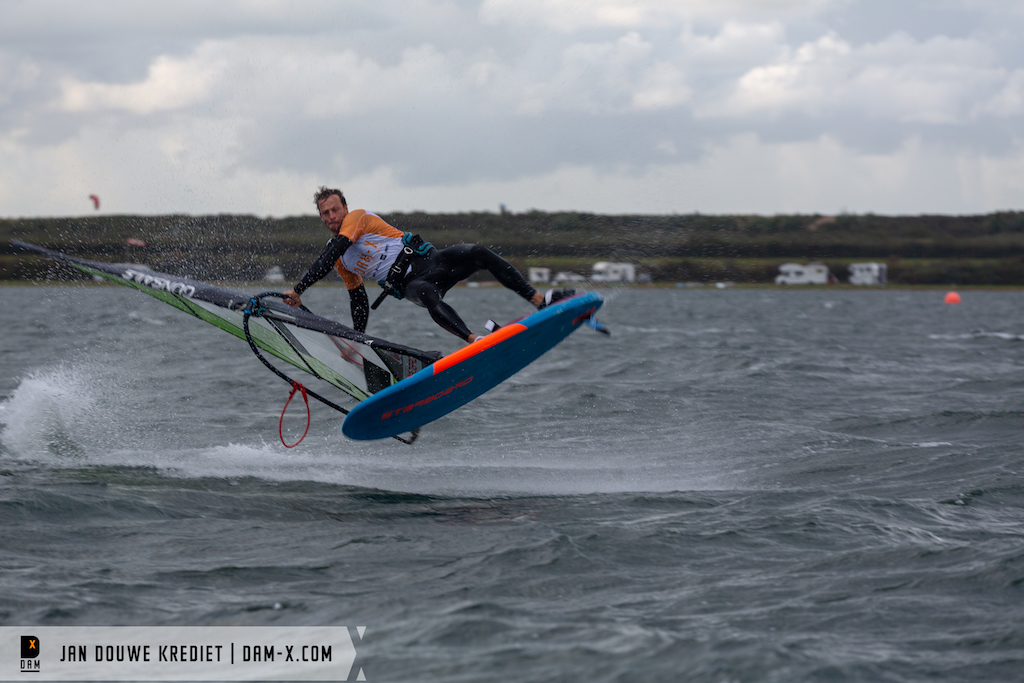 In the losers final Vrieswijk advanced over Caers, who has been struggling with a flu since the day he got here, leaving him hungry to improve in the single elimination. Winning here would be the cherry on the top of the cake, of Caers competition season.

Young talent from Slovenia Lina Erzen (Duotone) met Arrianne Aukes (Fanatic/Duotone) in the semi finals. Even though Erzen was sailing some incredible consistent heats, she couldn’t get past the routined pro windsurfer from the Netherlands. Aukes was landing shakas, konos and sliding maneuvres and dispatched off the young Slovenian to move to the winners final where she met reigning European Champion Maaike Huvermann (Starboard), who herself advanced over 14 years old Salomé Fournier (Sailloft). In the final the two Dutch ladies Aukes and Huvermann proved why they went into this race as title contenders landing flakas, shakas, konos and even powermoves like culos. In the end Huvermann, who is still struggling with a lung infection, could decide the final in her favor and claimed victory in the single elimination.

Top 4 women after the single elimination

Tin Greguric from Croatia, who entered his first international competition here, was making his way up in the double to take fifth place. He however couldn’t get past Tim Gerdens, who himself wanted to improve his ranking. Stefan De Bell from Curacao stopped the local boy to take on Eugenio Marconi. Marconi was eager to defend his EFPT U18 title from 2018 and took out Nil Bacon in the final of the double elimination – which led to a superfinal. Whilst Marconi could win on technical difficulty, Bacon took it on diversity and style and claimed first place in the end.

U16 Juniors
Local boy Tijmen Meijer (JP) had the comeback of the day. He sat in the last place in the single elimination and fought his way up in the double advancing over Patrickson Coffie, Luka Stomp, Val Erzen (Duotone), Bodhi Kempen (Starboard) and Tigo Kort. He won five heats but couldn’t get past Neubauer in the end. Meijer therefor claimed an excellent second place, landing flaks, shakas, spocks, funnels, grubbies and esliders. What a great performance by this U16 competitor, who definitely deserves this special mention here. Lennart Neubauer was obviously on his game, taking victory in the double. 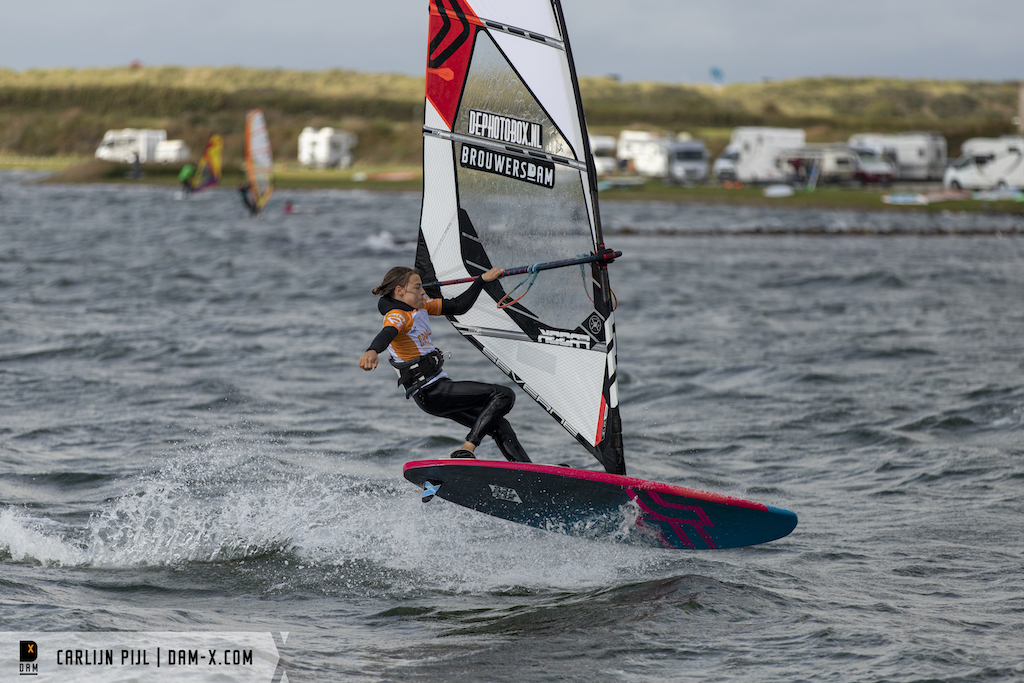 Tijmen Meijer – one of the sailors of the day

Junior Girls
Since we had three junior girls signed up we also wanted to give them the chance to compete against each other. Lina Erzen, Sterre Meijer and Salomé Fournier fought against each other in two heats, that Erzen could both win. Local girl Sterre Meijer and in fact sister of Tijmen Meijer, who took second place in the U16 division today, claimed second place. There will be another chance for the other girls to take revenge, however it will be hard for them to get past the Slovenian ripper.

There was no time lost starting the double elimination of the men. Charging through the heats was once again Felix Volkhardt from Germany, who advanced over Bastian Grimm (Fanatic/Duotone) and Tim Ruyssenaars and will now face Mattia Fabrizi (Patrik).

Duotone/ Fanatic rider Adrien Bosson was on fire today in his battle against Aron Etmon (Starboard), where the Frenchie landed a culo, shove it spock and spock culo to count on port-tack and a burner, air funnel 360 and culo to count on starboard. He advanced over the sailor from Curacao with ease and will surely be somebody to look out for in the double elimination.

Nick Van Ingen (Duotone/Fanatic) made his way past EFPT rookie Omar El Haddadi and Lennart Neubauer (Starboard) and will now face the winner between Jacopo Testa (RRD/RRD) and Marco Vinante next. Van Ingen sailed with a lot of style in both of his heats – it’s a shame to not see him compete in more EFPT events, as it would be amazing to find out how far he could make it in the yearly overall rankings.

After the wind had been dropping off in the evening, the race directory called it a day at 5.30 pm. With a strong wind forecast tomorrow, we expect to see some great action in the remaining heats of the double eliminations.