We’ve seen some incredible battles on todays freestyle playground in front of the Zeil and Surfcentrum Brouwersdam. Comeback of the double elimination has been layed down by French rider Adrien Bosson (Duotone/Fanatic) who won six heats, taking out Aron Etmon (Starboard), Marco Lufen (Duotone/Fanatic), Davy Scheffers and Mattia Fabrizi (Patrik) to then take revenge on Taty Frans, who stopped him in the single elimination. After also dispatching off Yentel Caers, he got stopped by Amado Vrieswijk who was on fire today.

Vrieswijk built up his scores heat by heat, marking down the two highest heat scores of the event in one day. Giovanni Passani had been expecting the boys to bring out the big guns to push him off the second place and Vrieswijk did. The Bonairean scored an average of seven points for his three moves counting each tack. He landed a Bongka, Kabikuchi and Skopu to count on porttack and an air funnel burner, skopu and air kabikuchi to count on starboard. 40,8 points for the JP teamrider. 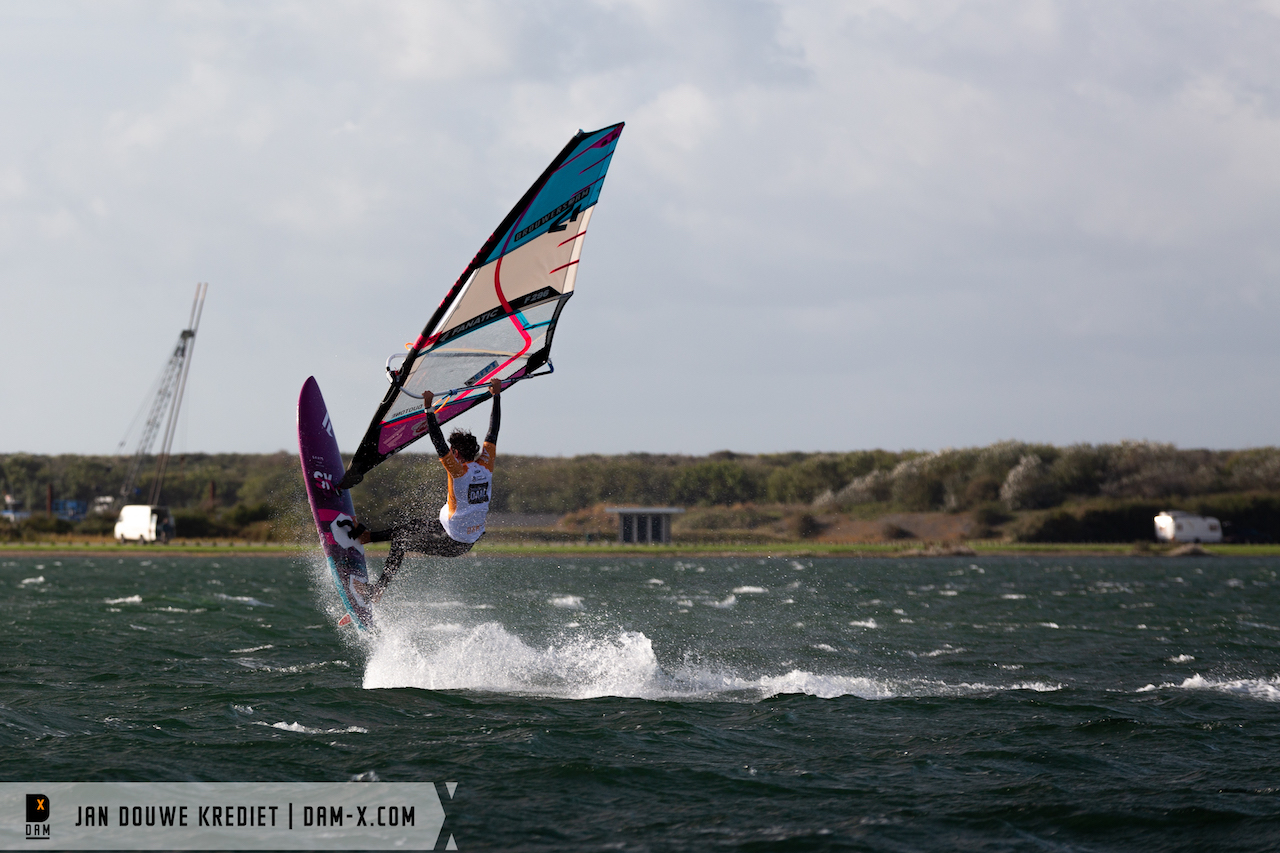 Next up was Steven Van Broeckhoven (Starboard/Gunsails), who is hitting podiums in freestyle for a decade already. It’s always impressive to see the Belgian ripping alongside the new generation of windsurfers. Van Broeckhoven and Vrieswijk put on an amazing show when they met in the final. Both riders had mostly double moves to count on both tacks, but Vrieswijk could decide it in his favor, advancing for 1,5 points only.

The following superfinal was something else and Vrieswijk could beat his own previous highscore. Both sailors landed bongkas, kabikuchis and burner combinations and the Bonairean completed his amazing score with a double air culo – the move that judges have been eager to see throughout this competition. 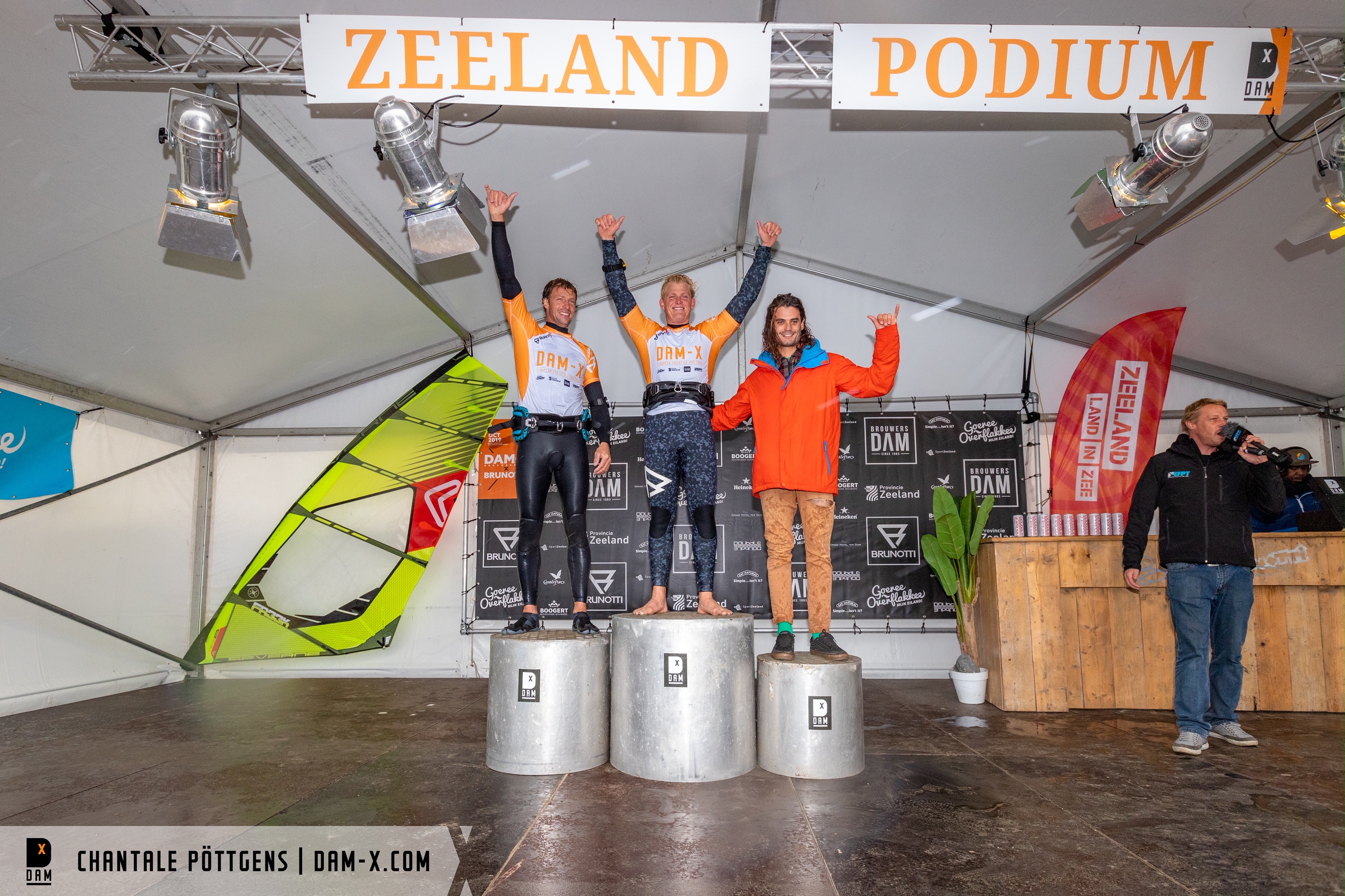 Comeback in the womens double elimination has been by Lisa Kloster (Patrik/Sailloft). The young German has been winning three heats, taking out Margo Kurvink (JP/Neilpryde), Sterre Meijer (Starboard) and Salomé Fournier (Sailloft). Kloster landed spocks, shove-its, flakas, switch konos and semi funnels. However it wasn’t enough to advance over Slovenian rider Lina Erzen (Duotone). It was nice to see the girls pushing each other in the heat. Erzen is only 14 years old, but already known for her consistency. The freestyle girl landed spock variations, grubbies, switch konos as well as flakas on both tacks. Kloster ended up in 4th position after all. Fighting for the event win have been Arrianne Aukes (Duotone/Fanatic) and local girl Maaike Huvermann (Starboard). Aukes put on a solid fight in the increasing wind, but couldn’t defeat her friend and opponet Huvermann who sticked flakas on both tacks, a super nice shaka and kono to name some of the moves. 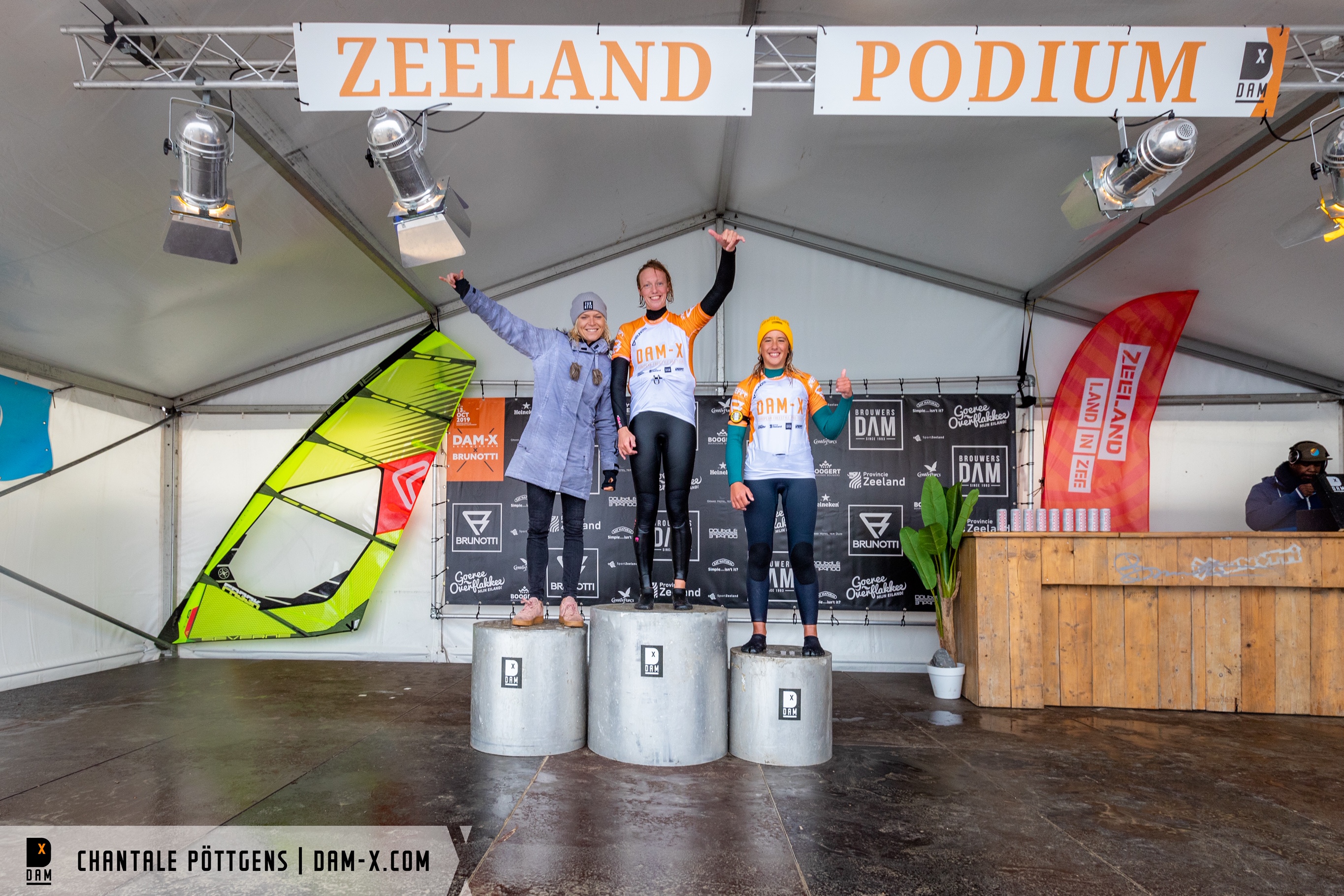 Since the junior U16 division has only been run at one other event so far (EFPT Lanzarote), race director Thijs Van der Meer decided to kick off another single and double elimination today. After a whole single and double in the last two days the boys got another chance to battle against each other. The single elimination had the exact same result like the double elimination yesterday, with Lennart Neubauer (Starboard) once again dominating this division, followed by Tijmen Meijers (JP) in second and Tigo Kort in third place. 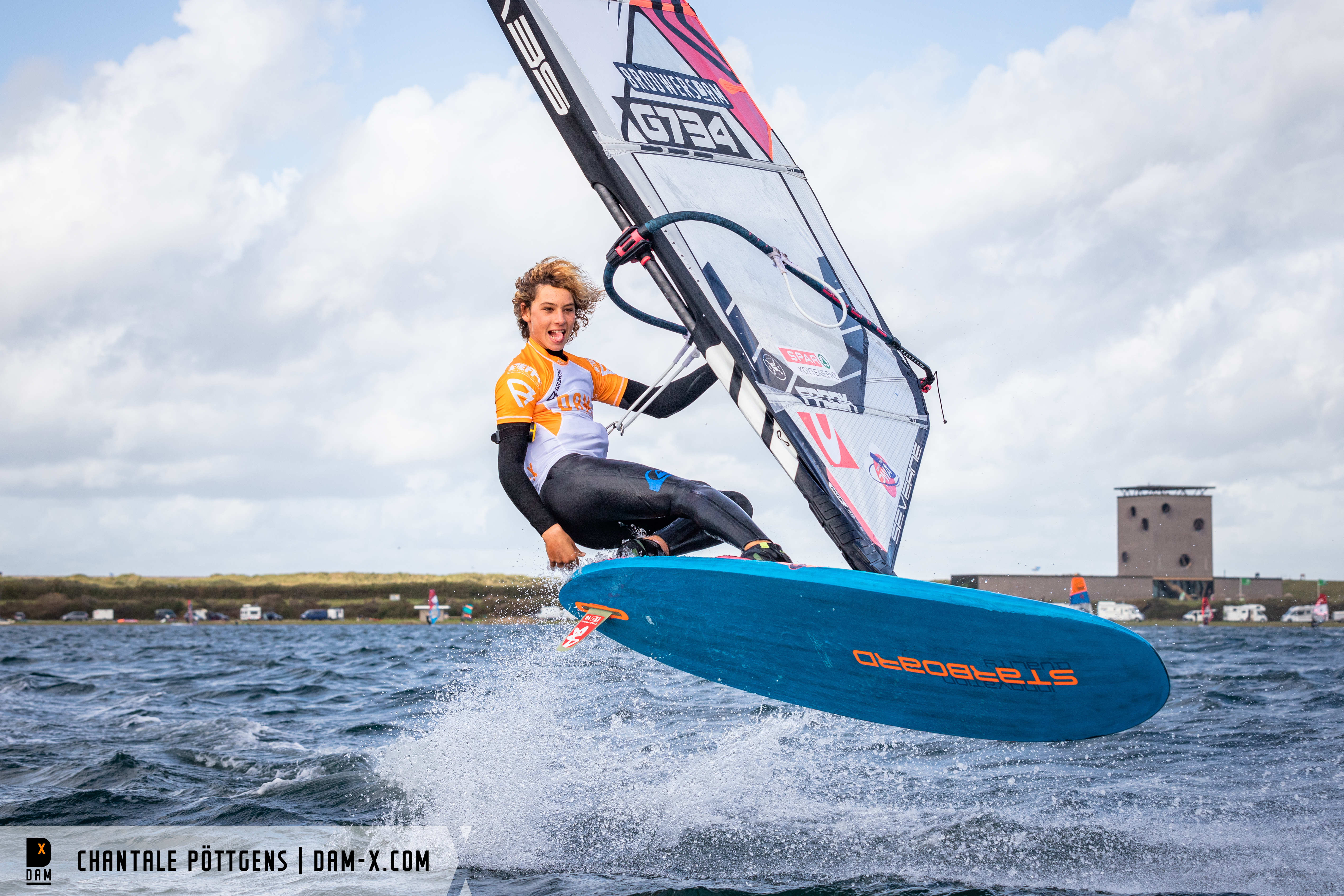 Lennart Neubauer dominating the U16

In the double elimination Val Erzen (Duotone) from Slovenia, who is the brother of Lina Erzen and who is sailing on an incredible level considering his age, won over Patrickson Coffie and Terence Clappers and made his comeback to fifth from last place. Tijmen Meijer caused quite an upset in yesterdays double, when he took out Tigo Kort. The local boy was ready today to fight back and after winning second place in this double elimination, the riders had been sent to the water for a final sail off that Kort could decide in his favor.

After two completed heats yesterday Lina Erzen has been in the lead in front of Sterre Meijer and Salomé Fournier. The freestyle girls sailed two more heats where Erzen has been dominating. With Sterre Meijer claiming three out of four second places, she secured the overall second place in the end. The junior girls as well as the junior guys were an amazing display of how much those young guns improved over the period of one year. 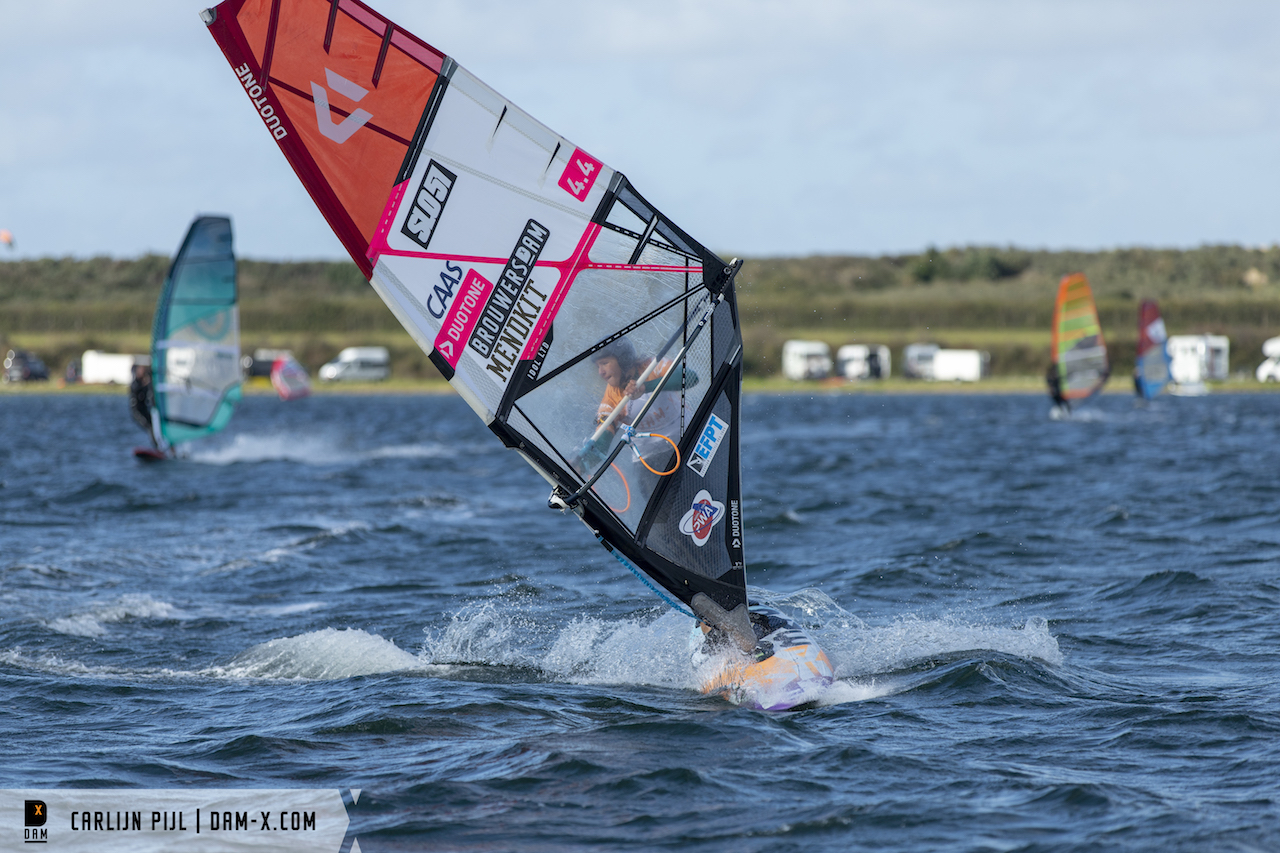 The forecast for tomorrow is light and the Brouwersdam will provide the perfect arena for the official EFPT tow-in with € 3.000,- prize-money. 18 riders will compete in two qualification rounds with the best eight moving on to the final.