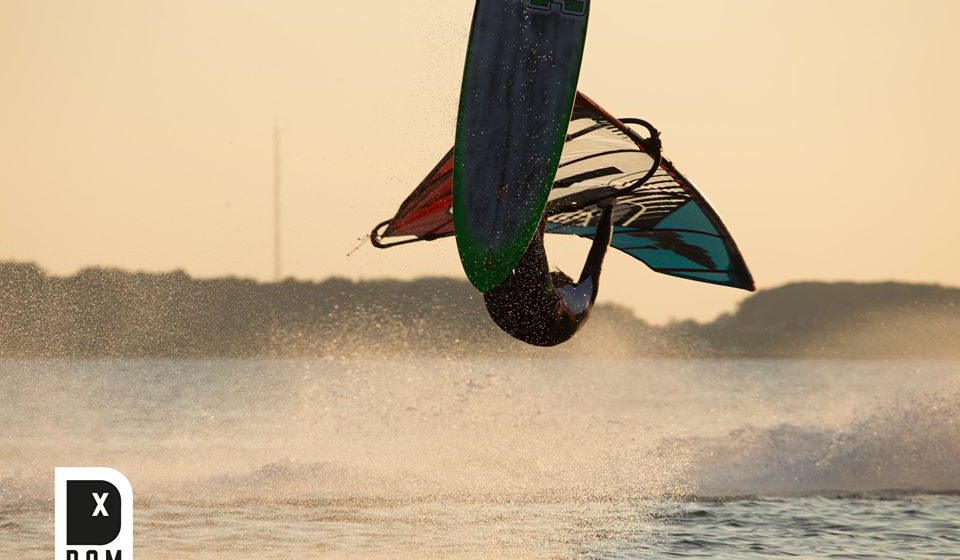 After two exciting tow-in qualification rounds yesterday, the last 12 riders of fleet number three were battling for the three remaining spots in the grand final this evening.

Tow-in round three saw some of the best tow-in competitors in Europe and a few rookies that still showed a mega impressive performance. 15 year old Wave Antonia (Starboard) and Richard Richie (Starboard) from Curacao had no problems at all with getting up behind the jet-ski and threw themselves through some high and fast burners. Nik Van de Eerenbeemt (JP/Neilpryde), who is usually only training slalom and is a slalom competitor on the PWA, landed a super clean burner in his second run.

Local rider Rick Jendrusch (F2/Severne) had two solid runs, going for a double funnell and a tripple funnell which scored him 42.5 points. Antoine Albert, the young sailor from New Caledonia who is joining the EFPT for several years already was going for his tow-in signature move: a skopu. He managed to land it perfectly clean in his second attempt. The judges awarded him with the highest score of this qualification round: 48 out of 60 points. Yentel Caers (JP/Neilpryde) who is a very strong tow-in competitor was going into both of his runs with the maximum risk and went for two air-funnell into burner attempts. Caers was unfortunately unable to complete the move and missed the place in the final. Adrien Bosson (North/Fanatic) who is one of the experts in this discipline stomped a burner 360 and landed completely upright, which scored 41 points. The three sailors that advance to the big final in the evening were therefor: Adrien Bosson, Rick Jendrusch and Antoine Albert. The lucky loser that completes the fleet of ten riders in the final is Hugo de Sousa (RRD/RRD) who just managed to beat Mattia Fabrizi (North/Fanatic) by 0.5 points for this position. For the final at 5.00pm spectators were gathering at the beach in the sunny and calm weather here at the Brouwersdam. The ten finalists qualified out of 38 riders who were also fighting for a place in the final with 3.000€ prize-money. Already in the qualification rounds the judges were not having the easist time with the show that was put on by some of the best freestyle windsurfers in the world. The tow-in final was something else and also held some incredible surprises.

The sailors had three runs with the best move counting. The first round looked more like the riders were using it to warm-up for what was to come next. Apart from manoeuvres like air-bob into bob by Julien Mas (JP), huge air-funnell into funnells by Hugo de Sousa and Steven Van Broeckhoven and a tripple funnell by Rick Jendrusch also two very exceptional moves were shown by the riders. After round number two Adam Sims (Sailloft/Patrik) from the UK was leading the fleet with a perfectly planing double culo and 53.5 points that no-one seemed to be able to reach until current world champion Dieter Van der Eyken (Starboard/Severne) unexpectedly flew through a massive skopu into another popped funnell. The crowd and the judges were going absolutely mad. Van der Eyken secured a perfect 60 points, the highest possible score. Since Antoine Albert already landed a decent skopu in the first round he was obviously inspired by the Belgian rider and also went for a super fast skopu into funnell and scored 58,5 points. Nico Akgazciyan from France went for a regular chachoo (boom to boom) that he landed perfectly. He reached a tie with Sims, yet the Brit could beat him with his scores from the previous rounds that were considerable higher. Steven Van Broeckhoven (JP/Neilpryde) tried to match those high scoring moves by ducking the sail to go for a culo, however it was not enough to reach the top positions.

The result for the DAM-X Tow-In Competition therefor remains like this: The forecast for the weekend looks promising so we hope to be able to start the freestyle competition on Sunday at the latest.

The top 3 of the tow-in competition