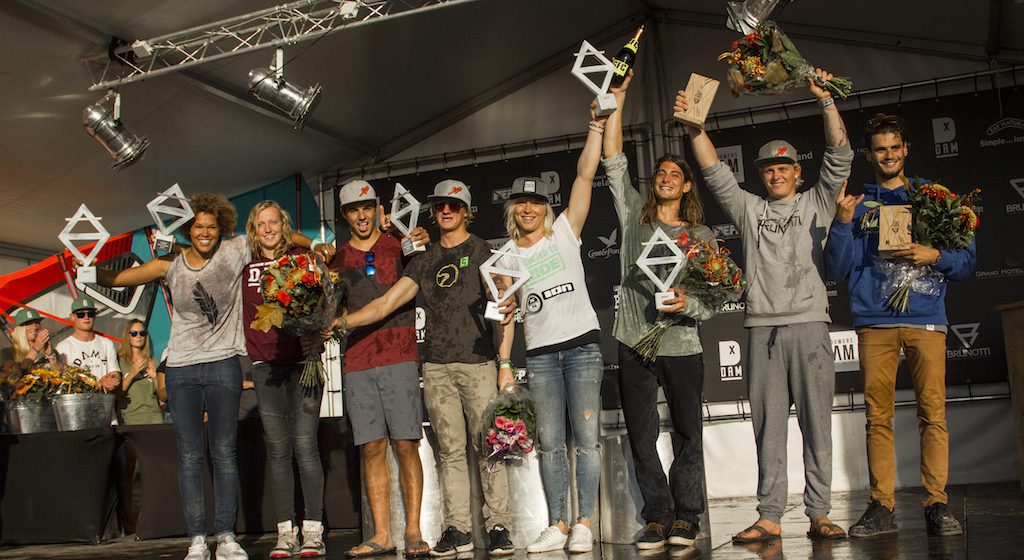 Crowning of the new European Champions

On the ultimate day of the DAM-X 2017, the wind unfortunately didn’t kick in just like we expected. Therfor the double elimination unfortunately couldn’t be finished. We are looking back on four amazing days though, filled with freestyle competition, amazing side programs and a spectacular tow-in show. The local crew here at Brouwersdam delivered a flawless event, which happens to be one of the highlights of the year for many riders and freestyle windsurfing enthusiasts.

Finishing off his best season ever with yet another first place at this tourstop was Jacopo Testa (RRD/RRD) from Italy. In 2017, The 25 years old freestyler from Sardinia is ranked third in the Worldtour and took the European Freestyle Champion title with two event wins and two third places. Throughtout the whole year, Testa was performing on a level that was off scale and sailed heats that were outstanding in terms of consistency and style. He showed the most remarkable performance at the EFPT Lanzarote this year, going through nine heats in a row to eventually beat eventleader Steven Van Broeckhoven (JP/Neilpryde). Testa proved that he was nobody to underestimate – no matter in which conditions, the Italian continued to deliver. Whether it was 3.8 weather and flat water, waves or 5.6 and chop. Being on the podium of DAM-X with one of his best friends Giovanni Passani, who himself showed some superb sailing this year, the Italian rider couldn’t hide some big emotions. Due to the new PWA rules, which doesn’t allow the top riders to compete in all the EFPT events, Testa will have troubles defending his title next year. With Giovanni Passani though, there is yet another Italian rider rising up to chase the overall win in 2018.

Third on the podium of DAM-X has been former European Champion and Vice World Champion Amado Vrieswijk (Severne/JP) from Bonaire, who was definitely hoping for a double elimination to improve his position. The lighter wind in this competition definitely favored the lighter sailors in the fleet though.

The overall podium for 2017 was a completely new one. We are happy to see the young talents, who started to compete in the EFPT just several years ago, already being all the way on the top today. 19 years old Sam Esteve (JP/Neilpryde), who had his debut on tour in 2014, became the new Vice World Champion. Only twenty points behind him was Belgian sailor Yentel Caers (JP), who has been chasing the title for several years now. With only two events and some exceptional sailing, he managed to still make it up to the overall podium for 2017. The overall podium was celebrated with a proper champagne shower, as local friends and family of Testa made the effort to travel to Brouwersdam to celebrate the victory together. The new European Champion stated that it has been a dream of him to stand on this place and now it became reality. He looked overwhelmed and more than happy about his achievement.

For the ladies it has been one more time ten times World Champion and two times European Champion Sarah-Quita Offringa (Starboard/Neilpryde) who could take the crown for the overall title. Maaike Huvermann (Severne/Starboard) was at Offringas heels and lost only very close to the powerhouse from Aruba, who has the reputation of being unbeatable. Arrianne Aukes (North/Fanatic), Vice European Champion 2016, took third place. All the top girls showed some incredible sailing and it was good to see, how some young riders were also trying to push their level in this competition. We hope to see even more ladies entering next year and will be happy to push womens freestyle windsurfing in the future. For now we are looking back on an amazing event with 48 sailors from 15 nations, who were putting on a great show, having a good time and making some unforgettable memories. We had a blast at the Zeil and Surfcentrum Brouwersdam and can’t wait to be back for more in 2018!