The first day of the Vanora Engadinwind by Dakine 2021 saw the introduction of an all new tow-in format to the EFPT: Airstyle! The qualifying is divided up into four categories, in which each rider gets one run. Each category is designed to make the riders try something new and to go bigger than ever before. A crisp but sunny morning at Lake Silvaplana set the stage for the first category run, and the judges were clear: get as much AIR as possible! 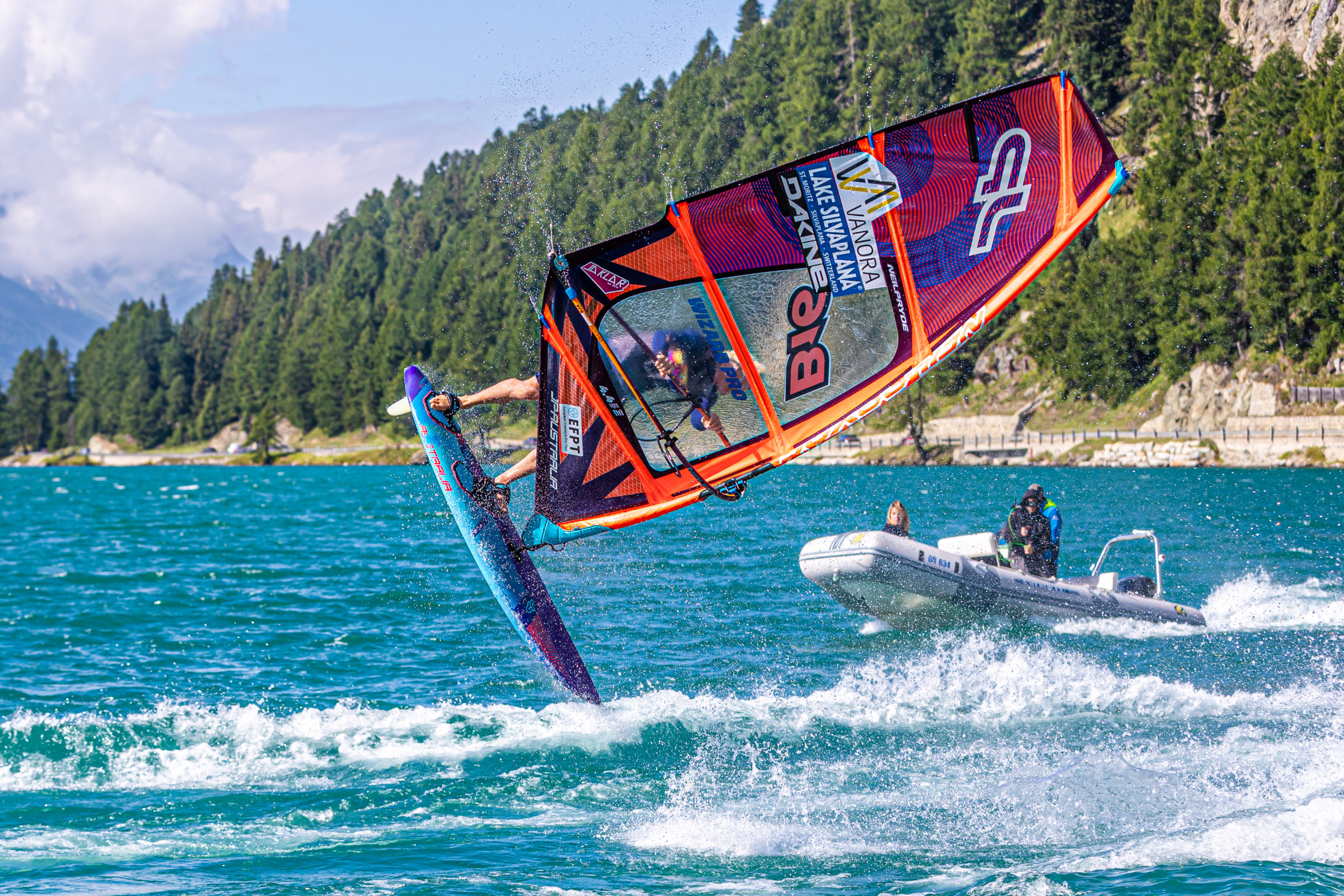 After the skippers meeting riders had 45 minutes to process the changes and go for a few practice runs. The beach was buzzing with anticipation for what the competitors will come up with, and soon everyone had their answer. At 10.30 the first run was completed by Amado Vrieswijk (FutureFly/Severne) who impressed with an Air Burner 360. Next up was Max Matissek (Fanatic/Duotone) who was the first to do a Skopu – a move that proved to be a favourite amongst the athletes in the AIR category. It was hoped that the inverted position with the board up high would trick the judges into perceiving the move as higher. Other riders who went for this strategy were last years winner Antoine Albert (Goya Windsurfing) and Sam Esteve (JP/NeilPryde) who absolutely stomped and basically planed out of his iteration of the move. 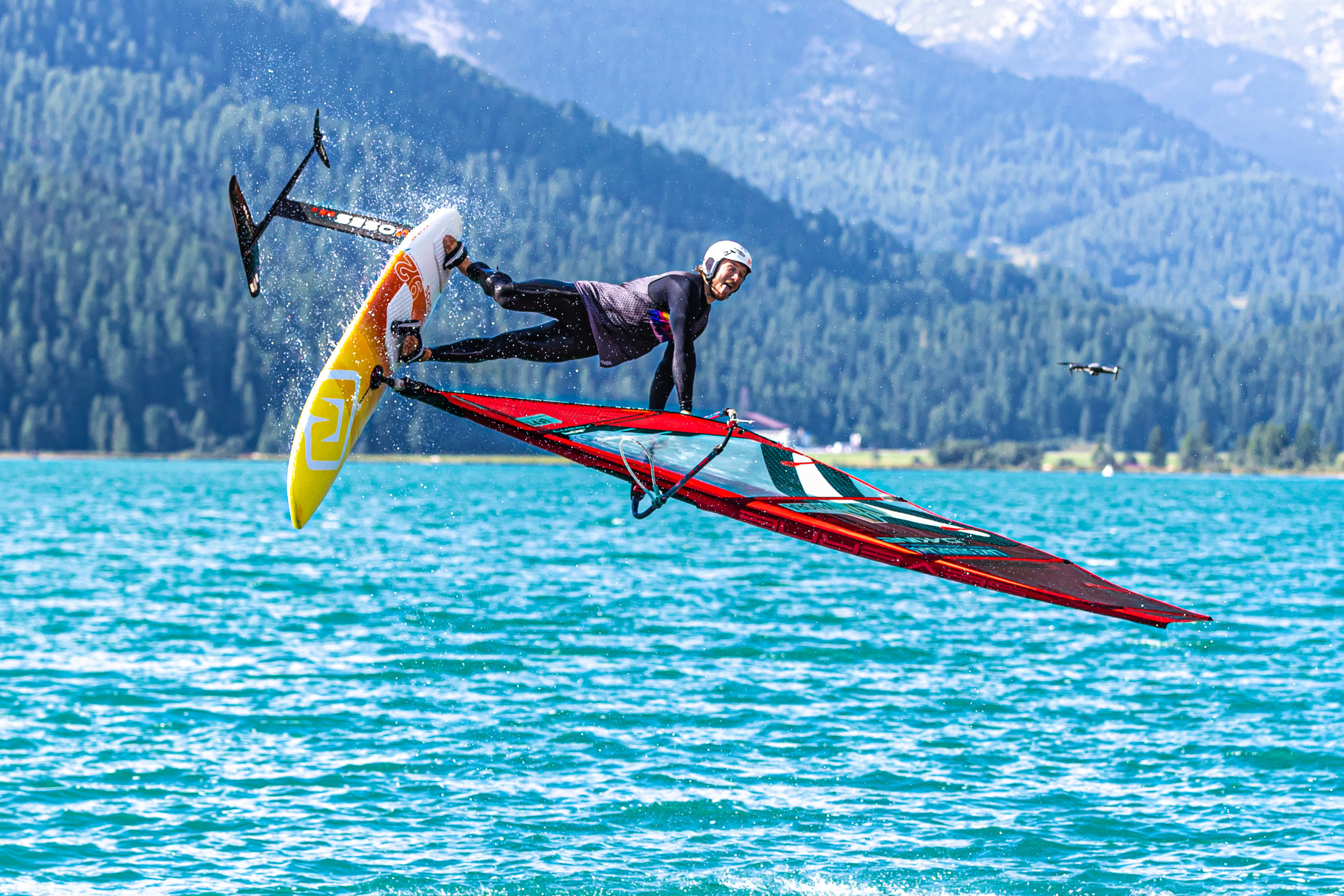 Sarah-Quita (Starboard/NeilPryde), who let on that she was going for the Skopu as well earlier in the day, actually ended up doing quite an impressive Air Burner 360. This was enough to beat Balz Muller (Severne), who went for an unconventional run using his foil. Hoping it would give him the extra height, he ended up struggling to control his equipment as the wind was steadily increasing. The stronger wind came in handy for Yentel Caers (JP/NeilPryde) who put down the highest scoring move of the day – an Air Double Air Funnel (can you keep up?). On the last run it was up to the current EFPT tow-in championship leader Lennart Neubauer (Starboard/Severne) to try and match Yentel’s performance. Going for a similar move his landing was a bit off, putting him in provisional third with Sam Esteve separating him from the current leader. 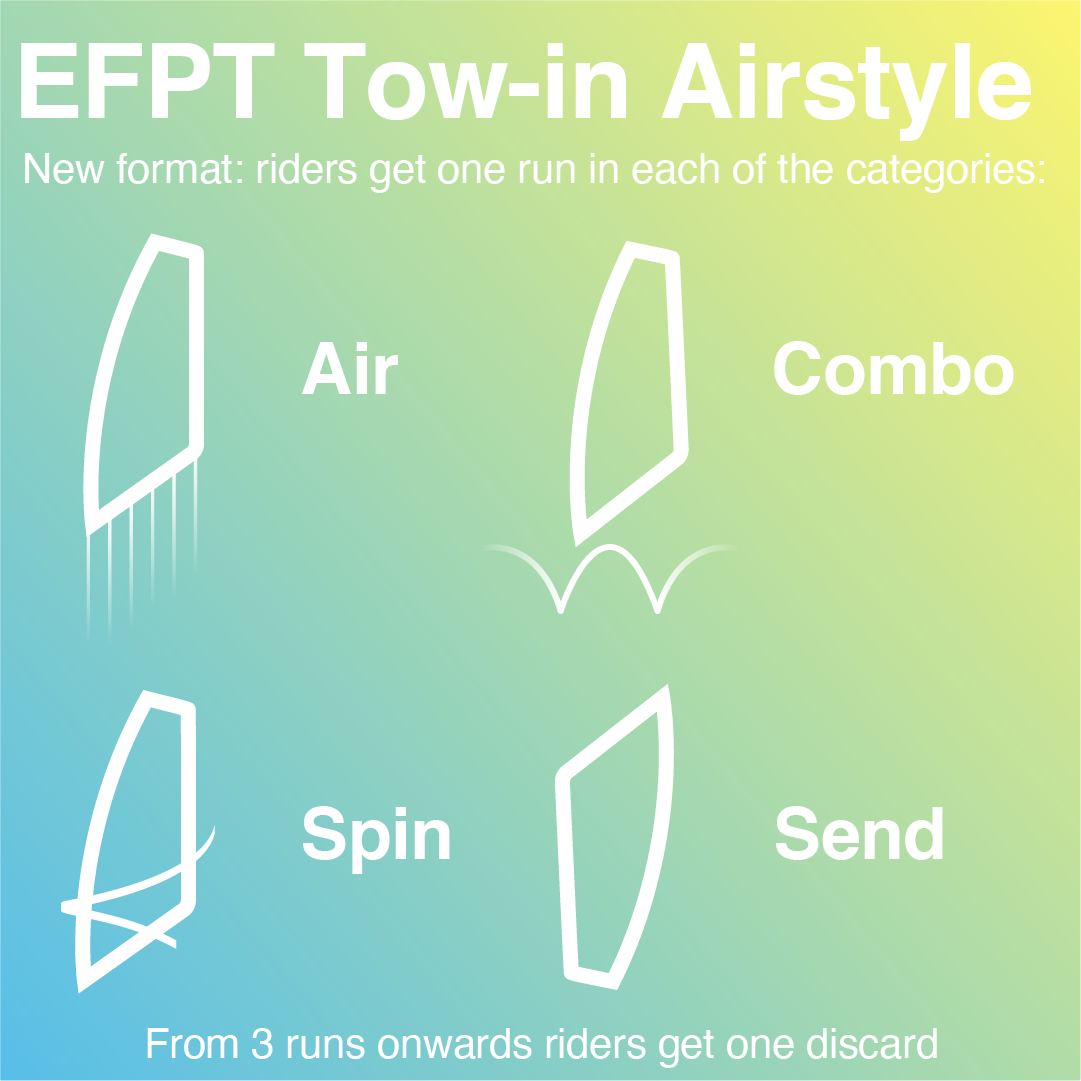 By popular demand from the riders, the EFPT is moving towards more showmanship and less of a competition. This lets the athletes express themselves better and push the level even more. The Tow-in Airstyle competition consists of two qualification days. Each qualification day will see some of the categories (Air, Combo, Spin, Send) and in the end, after one discard applies, a total of 6 riders will advance to the Saturday final. Pushing for a go big or go home mentality, the final will be in a knockout format. This means after every category the worst scoring rider will drop out, leading to an ultimate showdown of the TOP 3 Airstylers!

Tomorrow will see the Combo and Spin categories in qualification, so make sure to tune into our LIVEPAGE around 10.30 to see the action!