The first day of the EFPT Spiaggia Lunga Vieste 2022 saw registration, rain and lots of waiting. Excitement is high among the riders as the forecast for the upcoming days is epic to say the least, but the first day got off to a slow start. Travelling down to the south of Italy from all over the world, the athletes enjoyed a day of catching up with each other on the beach. Check out the highlight clip and read on to get an impression of the excitement during the opening day.

In the early morning after a tasty breakfast in the local restaurant Panini Di Mare riders registered for the event. The beach was ripe with enthusiastic moods. German Felix Volkhardt (Severne/MUF) has already been here for a couple of days and managed to score a couple of good practice sessions: “It’s a beautiful place and there’s a great atmosphere here, I can’t wait for the competition to kick off!”. The upcoming rider is sure to make a mark here, after showing everyone his potential in similar conditions in Theologos last year. Another rider who is hoping to do well in these conditions is George Grisley (JP-Australia): “I’ve been training going switch at waves all winter in Cape Town, so I hope to do well in Vieste!” he said when asked about his goals for this event. Current 2nd in the rankings Yentel Caers (NeilPryde/JP) was also excited and was discussing his chances. “I think the main title contender along with me here is Jacopo Testa” the Belgian said, reminiscing about the last time the EFPT visited Vieste when the two met in the final and Jacopo took the win. With a lot of speculation on possible showdowns the waiting game for the day began. 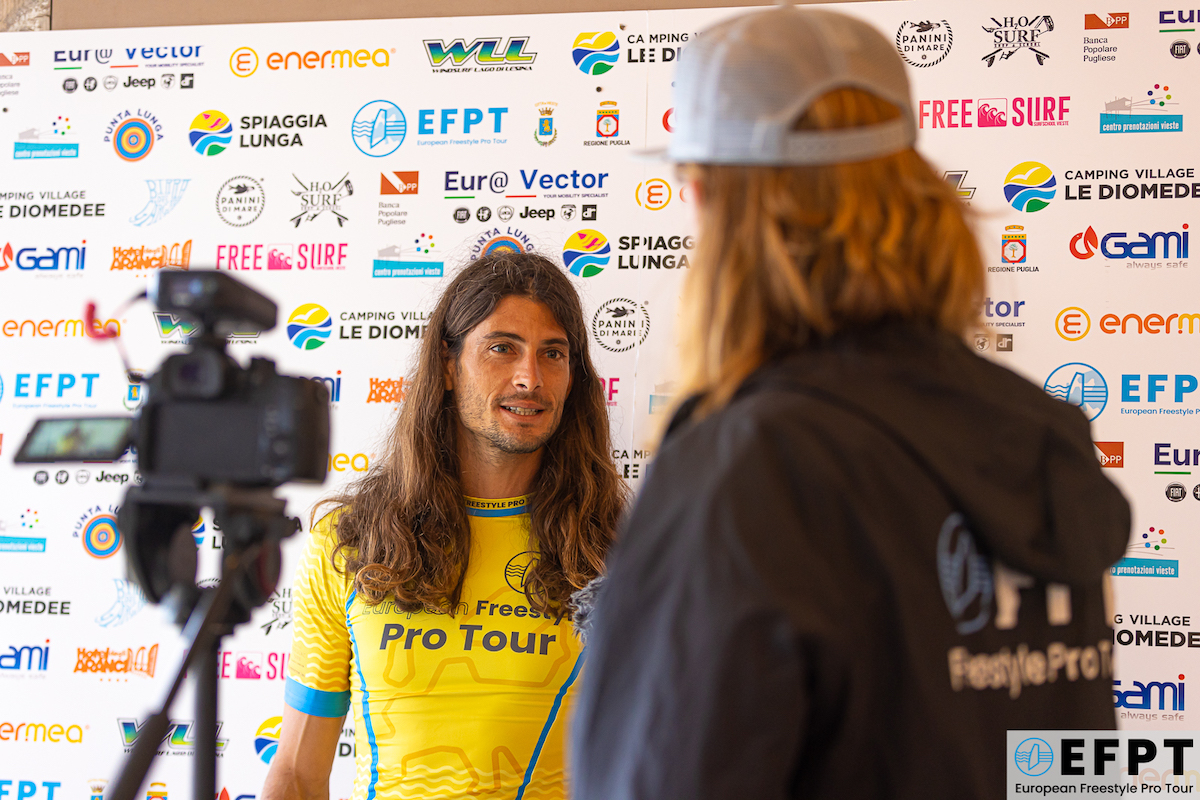 After a quick skippers meeting by race director Danny Kater, the single elimination ladder was announced. Some interesting showdowns are in the making, with guaranteed nail-biting action in the first round already. An exciting matchup will surely be French Raphael Bauer (Starboard/Severne) against Italian Eugenio Marconi (Duotone/Fanatic), as both riders are young but very promising. Another interesting heat in the first round will be Tim Gerdes against the aforementioned George Grisley, with both riders being very evenly matched up. Finally, Israeli Ilay Bamnolker (F2 Windsurfing) against newcomer on tour Mathiaas Vingaard (Starboard/Severne) from Denmark is another heat to look out for.

In the end the wind did not quite fill in, and with a large thunderstorm coming towards the event site the competition was called off for the rest of the day. The storm did bring around a change in wind direction to the promising NW winds of tomorrow. With a skippers meeting at 9:00 and a first possible start at 9:30 the cards are shuffled for a great display of freestyle windsurfing. See you there!