What a day! After a rather slow start yesterday, it was now time for some action. With the wind filling in earlier than expected, it was possible to run the complete three divisions: Juniors, Women’s and Men’s. The riders had to navigate tricky conditions as the waves and wind picked up in the competition area. Those who managed to harness them were rewarded with high points from the judges and of course advanced to the next rounds. Eventually, the day was closed off with a single elimination result for each division. So, read on to find out who has the best starting positions for tomorrow’s double… 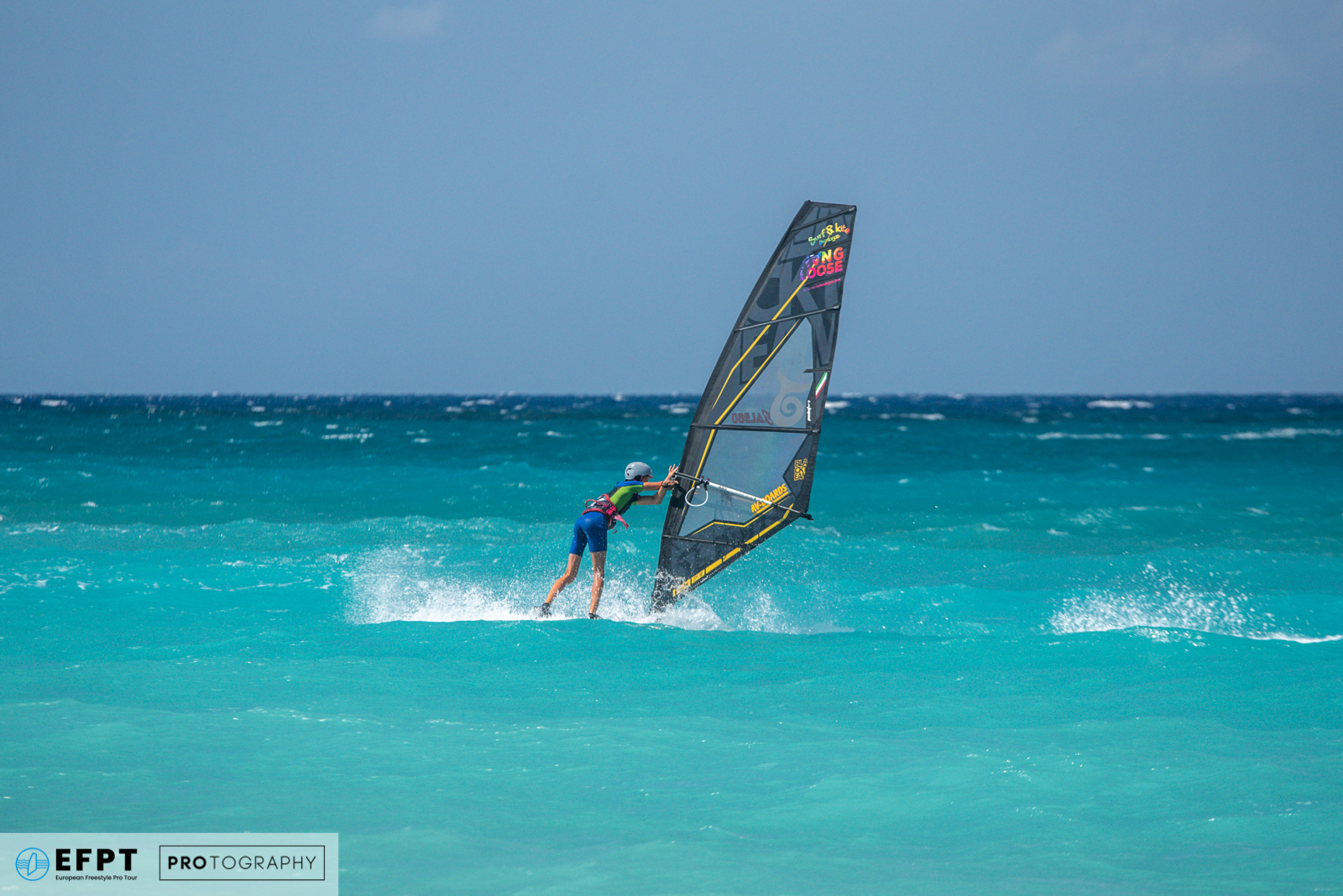 The day started off with the Juniors Competition. Kuba Luboinski going for a Spock. © PROtography 2021

The Juniors were the first to hit the water. Even though the wind was still building, Brouwersdam locals Tigo Kort (JP/NeilPryde) and Bodhi Kempen (Severne) impressed with power moves securing themselves spots in the next round. This was at the expense of Swedish ripper and rookie Primus Sörling. Jakub and Mateusz Luboinski showed promise during the Rookies Camp but were still learning the ropes of competition. Resulting in both of them missing parts of their heat. This was convenient for Piero Rautnik who easily qualified for the next round this way. Waiting for him there was none other than Lennart Neubauer (Starboard/Severne) who made short work of securing himself a spot in the final. The battle between Kempen and Kort was close but, in the end, it was the bigger sail of Kempen that allowed him to score more points and therefore join Neubauer in the final.  Although it comes as no surprise that Lennart Neubauer took the single elimination win, it is worth mentioning that Bodhi Kempen put up a fair fight, only losing out by 2.5 points. 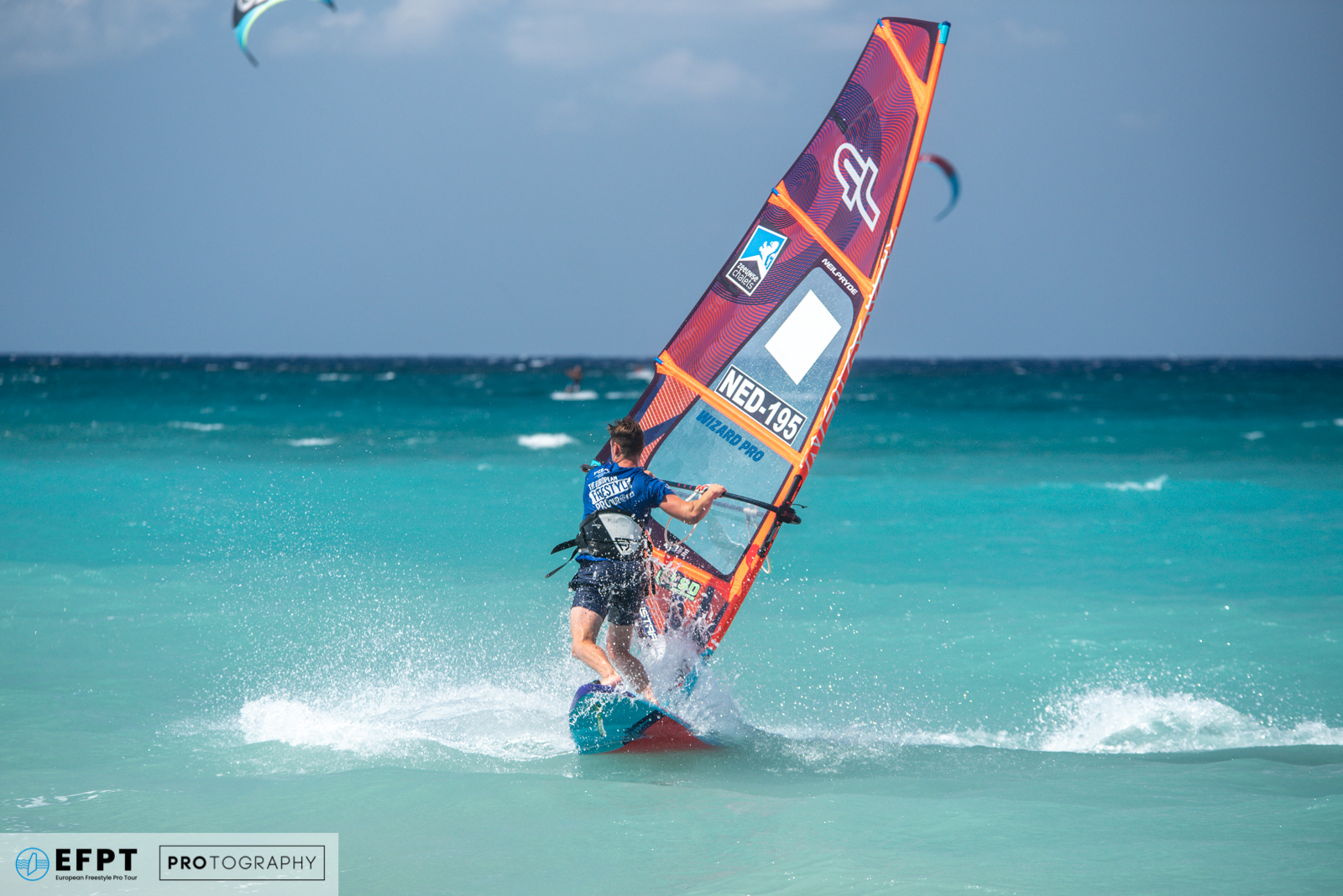 As the Juniors ladder progressed, a start was made to the Women’s competition. The elimination was kickstarted by Sterre Meijer (Severne) who managed to out-sail Olga Pytharouli thanks to a well-executed Spock. In a similar fashion to Rautnik in the juniors, she then faced one of the worlds’ best sailors – Maaike Huvermann (Severne). Despite losing, Meijer went on to claim the 3rd spot in the Women’s small final. In the final Huvermann confirmed her world-class status, beating Olya Raskina (JP/NeilPryde) who did not give away the win easily. 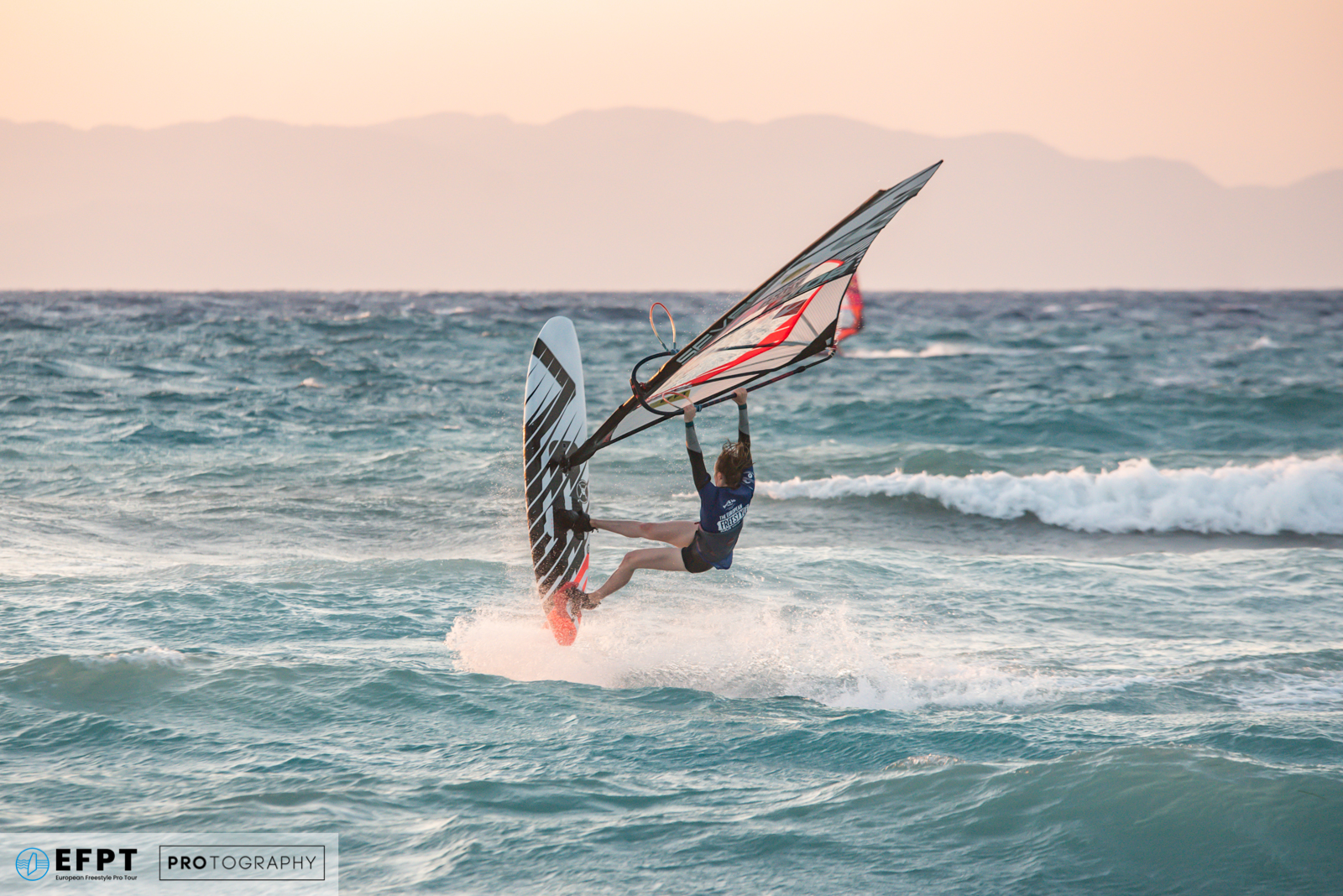 With a total of 33 men registered, their single elimination took up the rest of the afternoon. As the heats progressed, the conditions were becoming better and better. The waves ended up playing a paramount role with most riders scoring best on their port tack (going out) jumps. We saw lots of Backloops, as well as Air Chacho’s (Antoine Albert), Shifty Shaka’s (Amado Vrieswijk), super high Pushloops (Jacopo Testa), and even a one footed Backloop (Dieter van der Eyken). Let’s take a look at the best heats of the day. 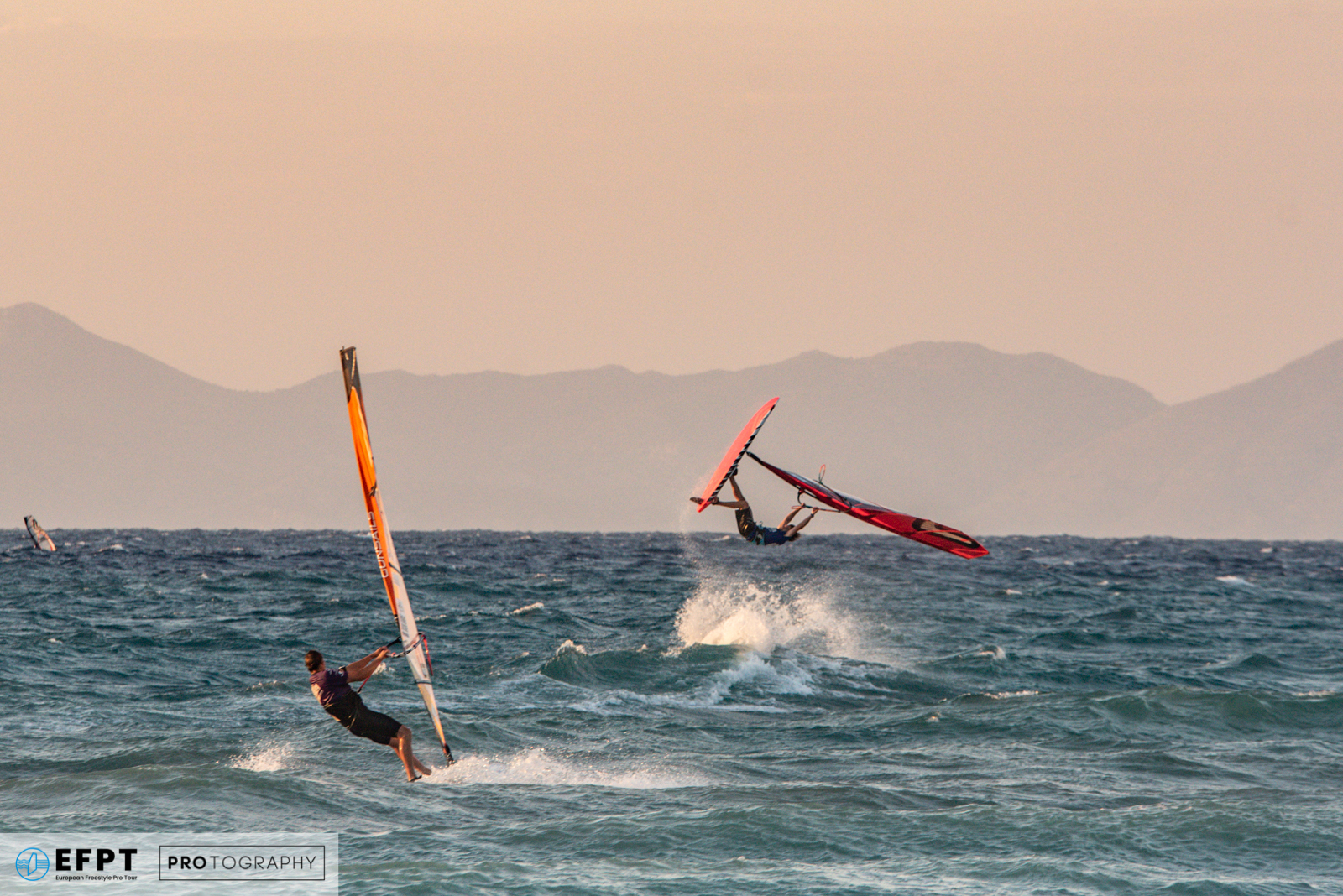 Straight from the start we saw some exciting battles. Despite focussing more on wingsurfing lately, Gollito Estredo seemed to not have lost his mojo. With a Pasko and a Kono on each tack he eliminated Italian Matteo Testa. In his next heat the new generation was coming for him though. In the biggest upset of the day, Lennart Neubauer (Starboard/Severne), who was fresh out of winning the Juniors, managed to eliminate the multiple world champion. In the end the young ripper was stopped by Amado Vrieswijk (Future Fly/Severne), who actually had to put down the highest heat score of the day to stay in the competition. On the other side of the elimination ladder, another rider of the old guard was doing much better. Steven van Broeckhoven (Starboard/Gun Sails) was steaming through the ranks – showing that his multiple European titles are as relevant as ever. Another exciting heat was sailed between Goivanni Passani and Antoine Albert (Goya). At the end of their battle there was only 0.01 point separating them, prompting the judges to review the scores with Albert coming out on top.

In the men’s small final we saw a Belgian showdown between Dieter van der Eyken (Severne) and Steven van Broeckhoven. Both were exchanging the lead frequently as the heat progressed. On their wave jumps their final scores matched perfectly so it was down to their incoming moves. In the end it was van Broeckhoven who secured the 3rd spot with a no handed Burner and a few Culo variations. 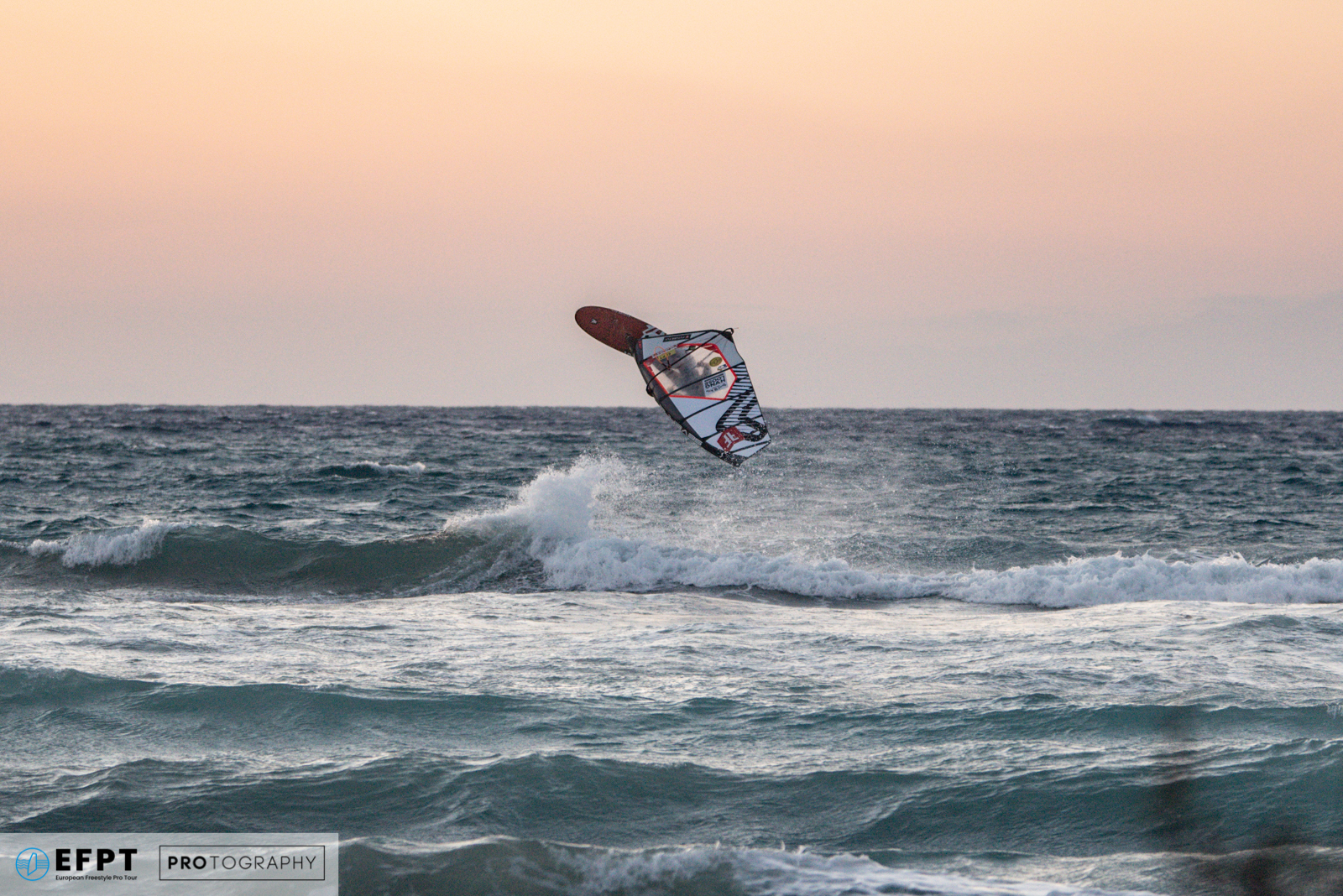 Going for the win in the final were Jacopo Testa (AV-Boards/Point-7) from Italy and Amado Vrieswijk from Bonaire. With the sun already below the horizon both riders were actually above it for most of the heat. Getting a lot of height, we saw the aforementioned Shifty Shaka from Vrieswijk and a sick Pasko from Testa. Jacopo added to that with a beautiful Pushloop but Amado seems to have learned from his exchange with Neubauer as he left no stone unturned – securing another 40+ point heat. This awarded him the win for the men’s single elimination, and therefore the best starting position for the double coming up tomorrow.

With the single eliminations completed in a spectacular fashion, everything is lining up for an exciting double elimination in all the divisions. Make sure to follow the action on our livepage.