Another day that was too light for Foilstyle but perfect for Tow-in. The riders went all out to make up for the lost foil freestyle action in this years new Airstyle Tow-in format. As the official competition started, the athletes were now battling it out to qualify for the Saturday final. With some impressive action from both the women and the men the day closed off with the top 6 riders making it through to the ultimate Tow-in knockout final tomorrow. Read on to find out who made it… 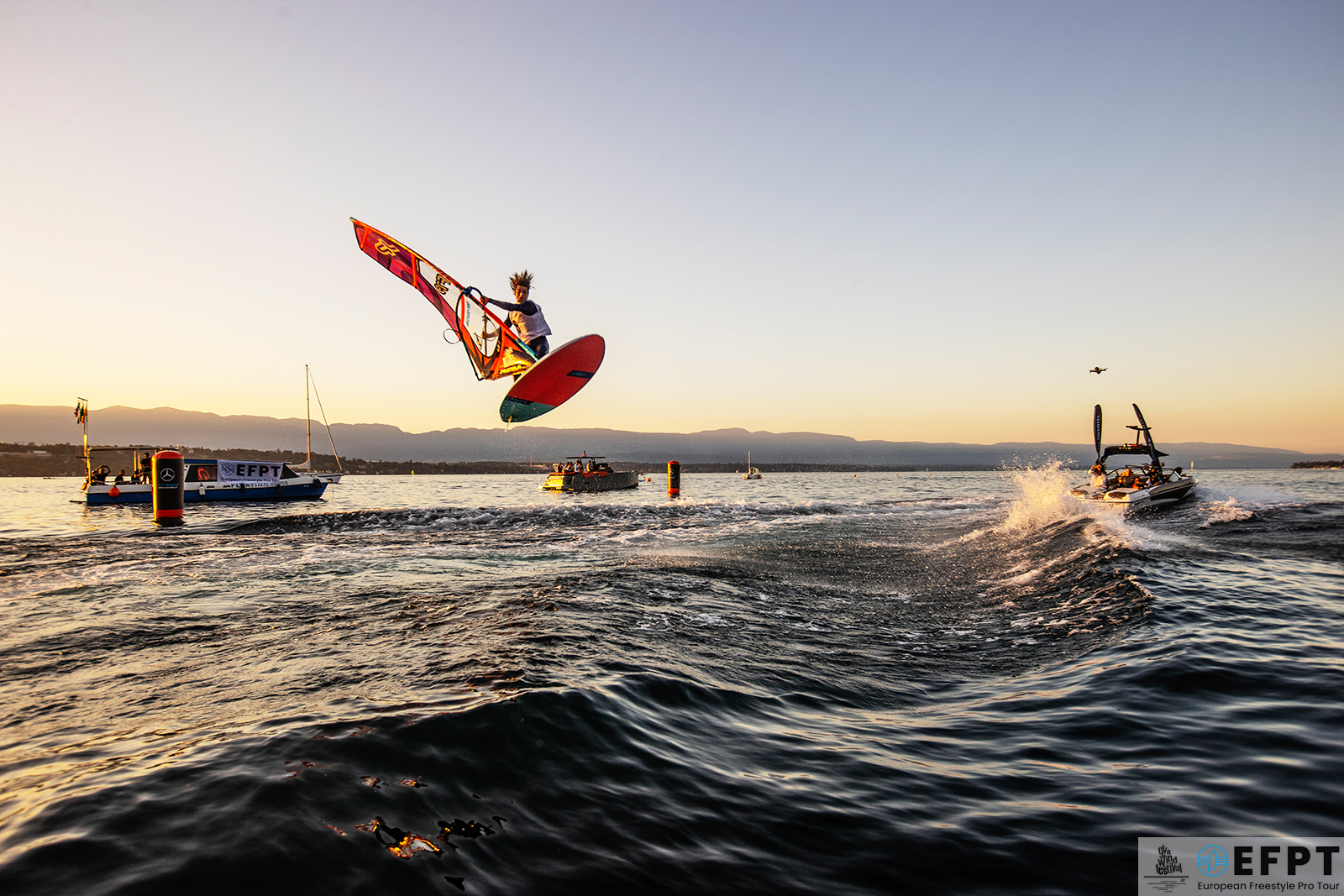 The first category in which the athletes competed was Air. These runs were almost hazardous to the crowd as the gear was hurdling towards them due to the amount of height and travel the riders were getting. Special shoutout goes to Lina Erzen (Duotone) who has outflown a couple of the more experienced male riders. In the meantime local Nicolas Mamzer went for the windsurfing equivalent of a pole vault, by sticking his mast in the water and flying super high over the top of it. The category win was taken by Sam Esteve (JP/NeilPryde) after a near perfect 10 score thanks to a 2.5 air rotation.

In the Combo category everyone was impressed by EFPT CEO Adam Sims, who not only found some time to compete, but also went for a Spock Culo, trying to time the Spock in front of the wave in order to take off into the Culo with some massive height. Despite not succeeding, it was one of the most creative attempts this afternoon. Foivos Tsoupras bounced through a Funnel into Air Funnel, with the second rotation being incredibly high. He shouted out his excitement and was well rewarded by the judges. The top riders all went for waveless Air Funnel Burner combo’s with Lennart Neubauer (Starboard/Severne/MUF) completing the most impressive one with an action camera in his mouth. 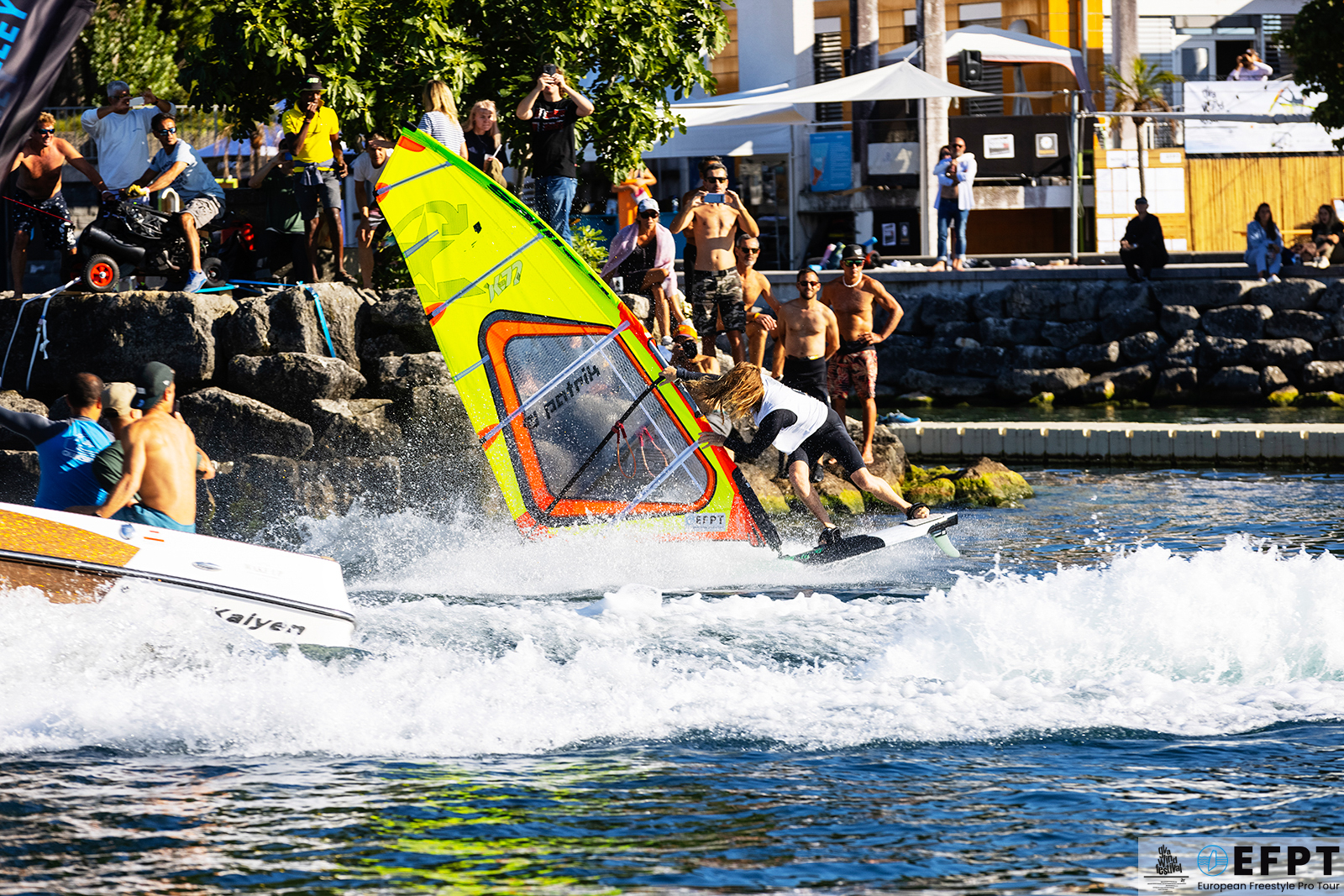 Adam Sims trying to fit in a Spock before the wakeboat wave. Picture by John Carter.

Next up was the Regular category. In this round riders were encouraged to go for regular stance moves like Culo’s, Kono’s and Air Bob’s. There was one move on most of the riders minds: the double Air Culo. Only Yentel Caers (JP/NeilPryde) managed to execute it perfectly and thus collected maximum points in this round.

Then, as Ben Proffitt would say it, it was time to SEND IT! In the last category the aim of the game was to impress the judges by going all out. And impress the riders did, one of the judges even dropped his scoring tablet into the water in awe of the action. A definite standout in this round was Tow-in rookie Lucie Honegger (Severne) who, as she was focussing on getting in the straps, accidentally ended up on the wrong side of the buoy line. As the winch was accelerating she had two choices: bail out or jump the line. She jumped it and won the crowd’s hearts, moreover, the judges even thought it was her intention to do so and scored her ride accordingly. Afterwards Foivos Tsoupras also sent it with his first attempt at a no-handed Burner. Yentel Caers once again stole the show with a double Air Culo Diablo attempt – the first ever seen in Tow-in. In the end it was Sam Esteve who stomped another perfect 2.5 air rotation and thus won the qualification. 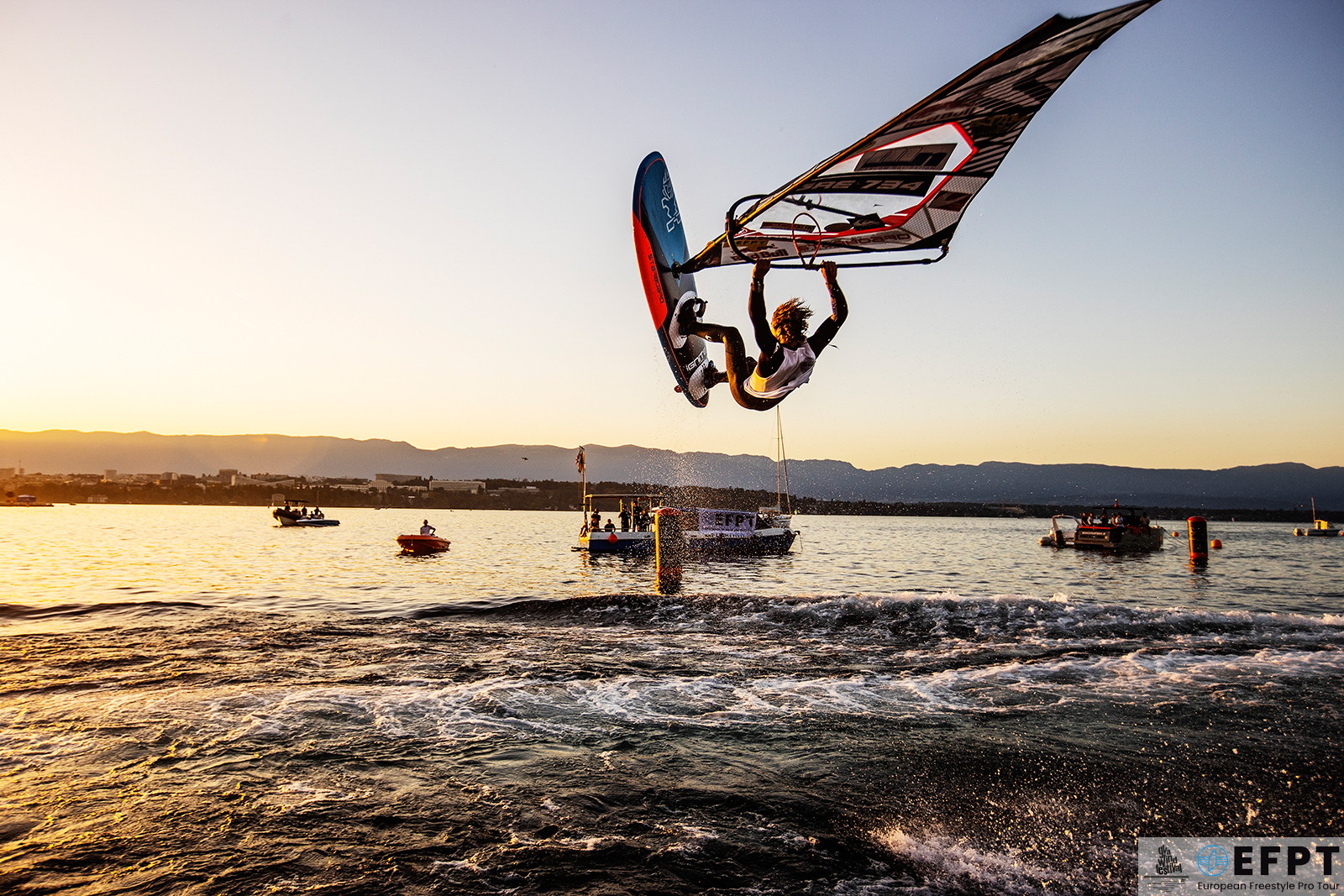 After four runs each rider got a discard and the final results settled in. Sam Esteve topped the leaderboard with Yentel Caers in Second. European Junior Champion Lennart Neubauer closed off the podium, with the amazing performance of Foivos Tsoupras just shy of it. Fifth was taken by Jeremy Plüss and the last qualifying rider was Adam Sims. These six will face each other off tomorrow during the knock-out final where after each run the lowest scoring rider is eliminated. Make sure to follow @efptour on instagram or check out the livepage to get all the updates on the final!