Day 2 – Testa and Huvermann take the single elimination win, big strides are made in the double – EFPT Austria 2022

Full on action at the second day of the EFPT Surf Opening in Austria! Eleven hours of competition culminated in two official results and some significant progress in the double eliminations on both fleets as well. With some huge upsets and tricky conditions this day will do down in EFPT history as one as the longest ones on record. In the end it is Italian Jacopo Testa (AV-Boards/Point-7) and Maaike Huvermann (Severne/MUF) who are leading the standings in the men’s and women’s division respectively. Check out the highlight clip below, and read on to get the full details!

The single elimination for the men started bright and early. The wind needed some time to wake up as well, but once through the first round, bar a couple of re-sails, the competition was steaming ahead. One of the standout riders was Antoine Albert (Goya Windsurfing) who took down current World and European champion Amado Vrieswijk (FutureFly/Severne), securing himself a 4th position. Another rider causing some upsets was Jamie Howard (Severne). Beating German Niclas Nebelung (Fanatic/Duotone/MUF) and current Vice-World champion Adrien Bosson (Fanatic/Duotone/MUF), he showed great consistency after not competing for quite a few years. Will this year be his great comeback? In the end he was stopped by Dieter van der Eyken (Severne) who went on to take third. Ending on top were Belgian Yentel Caers (NeilPryde/JP) in second, and Italian Jacopo Testa (AV-Boards/Point-7). Both riders navigated the gusty winds really well, oftentimes throwing down power moves where others were hardly on the plane. In the final Testa got the nod from the judges thanks to some expertly executed regular chachoo’s – a move he is well known for and which other riders surely envy! 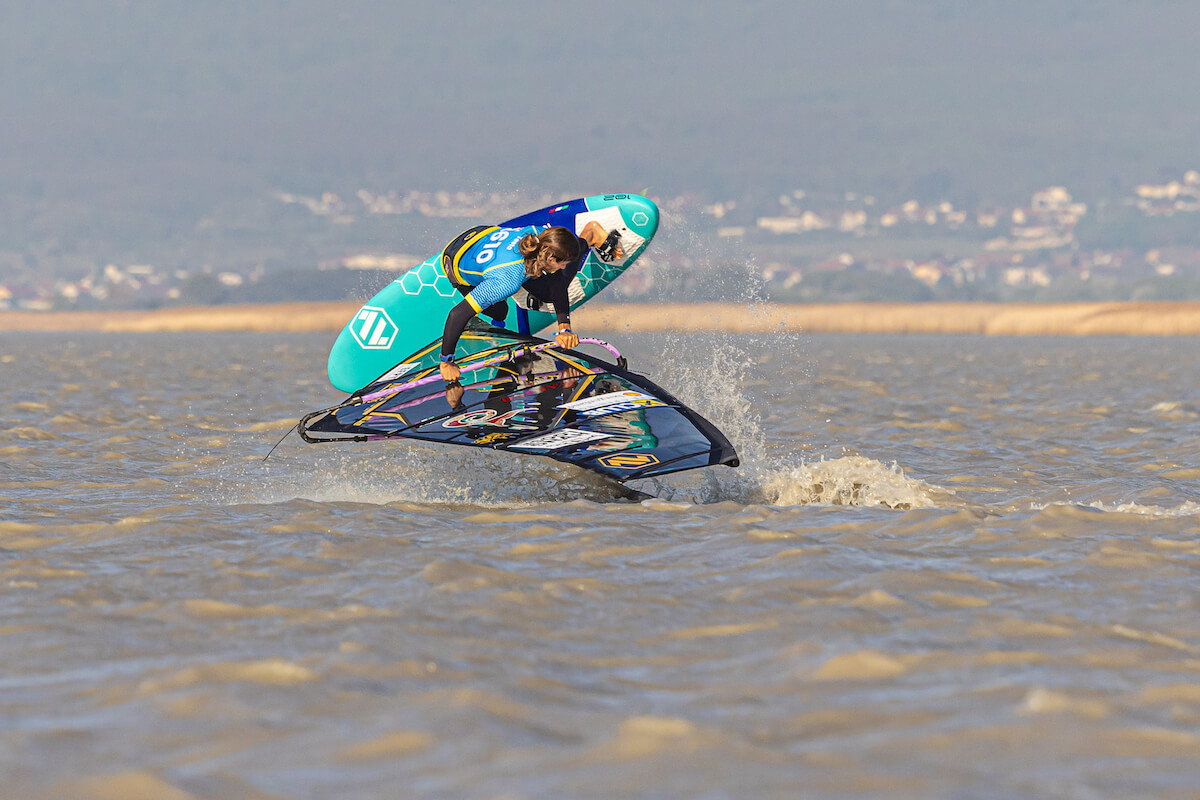 In the women’s draw it was great to see such a large fleet! With lots of new names on the board as well, the heat to heat improvement in terms of competition strategy was impressive. Stars of the single: Slovenian Lina Erzen (Duotone) in second and German Lisa Kloster (Sailloft) in third. Both girls giving Maaike Huvermann (Severne/MUF), current European Champion, a run for her money. Power moves were on the table and close battles were fought on the chocolate Neusiedlersee. In the end Huvermann came out on top, and will be defending her first place in the double elimination tomorrow. 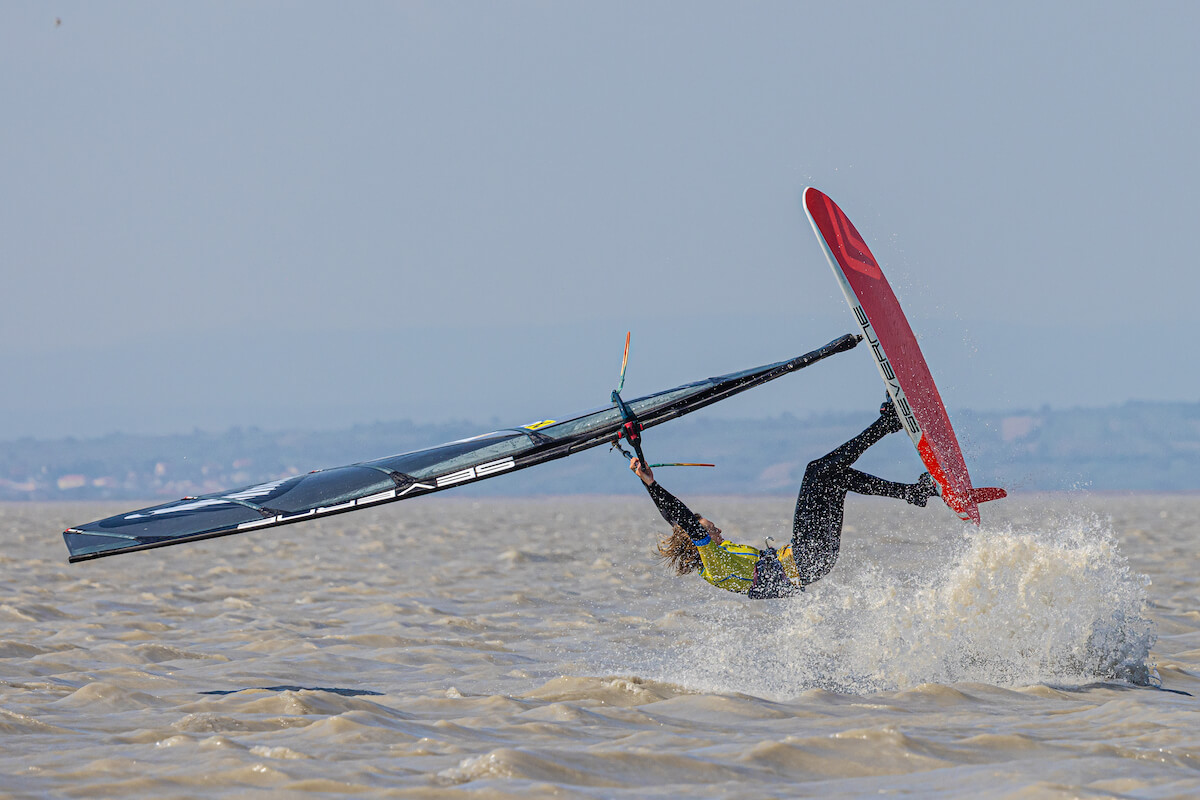 With the single elimination completed, we jumped straight into the double. All riders now had a chance to fight back up the ladder. A rider who did that best was local hero Michael Czech (Severne). Boasting a comeback past names like Nebelung, Kempen (Severne) and the aforementioned Jamie Howard, the Austrian took a well deserved spot in the top 9 after being eliminated by flying frenchman Sam Esteve (JP/NeilPryde). The double also saw a lot of national matchups, with Tigo Kort (JP/NeilPryde) beating fellow dutchie Tim Gerdes, and Dudu Levi (Starboard/Gun Sails) taking out another Israeli rider – Eliran Levi (F2 Windsurfing). Dudu impressed on day 2 in general, with a strong result in the single, and then advancing further in the double, securing himself a top 12 spot in the rankings. The rest of the double is still open, with some big matchups coming up! Will Testa hold on to the crown or will Esteve, van Broeckhoven (Starboard/Gun Sails) or Albert make a big comeback? We will hopefully find out tomorrow! 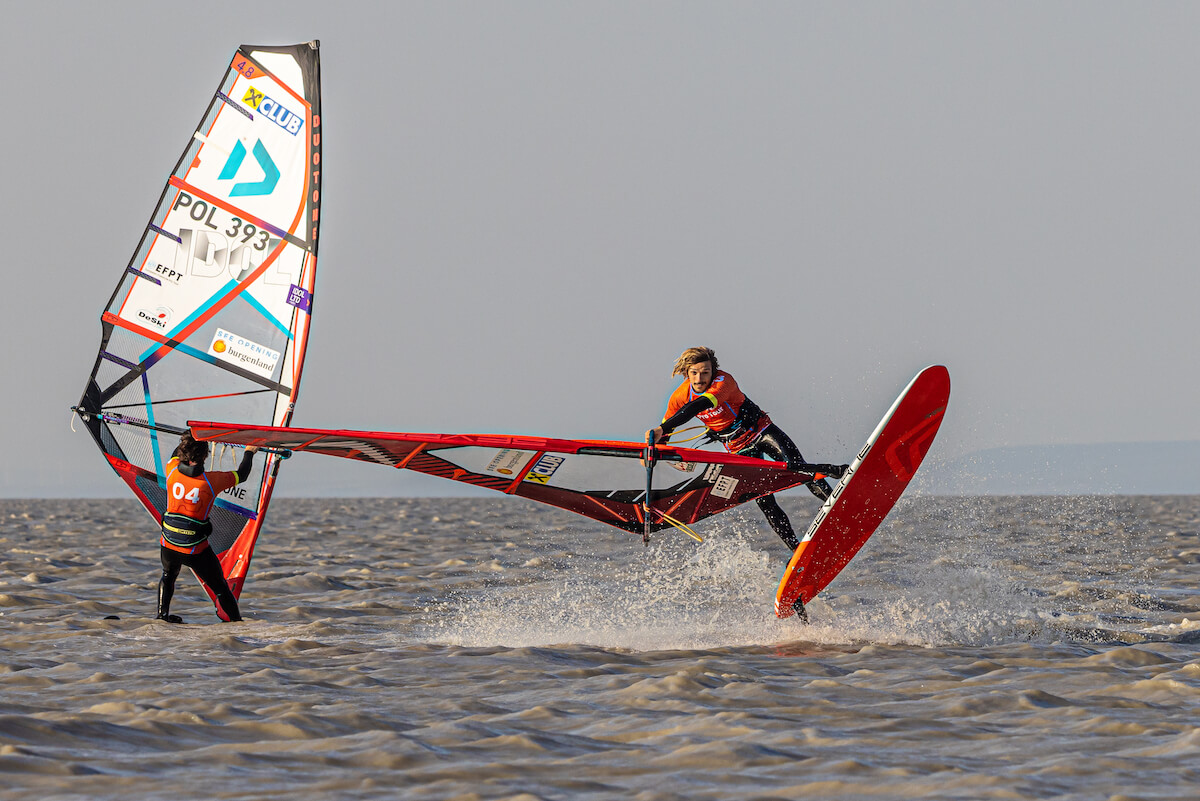 Michi Czech lifted his way up through the double elimination

With about 10 heats left to sail, we only need two hours of wind to get official results in the double elimination. Although the forecasted wind is less than today, the higher temperatures might just tip the scale towards suitable conditions. The first possible start is 9AM, make sure to tune into our social channels to find out the latest updates as to when the competition, and the livestream will start!

Want to see all the action from Day 2? Here is the full livestream replay for your viewing pleasure: