In what was anticipated to be the windiest day of the competition, the Single Elimination drew to a close with Yentel Caers (NeilPryde/JP) coming out victorious. In tricky conditions the Belgian fended off current tour leader Jacopo Testa (Point-7/AV-Boards) who underperformed in the final. The podium was complete with multiple European Champion and veteran of the freestyle scene Steven van Broeckhoven (Gun Sails/Starboard) coming in third. Read on to learn about all the ins and outs of this exciting day on the Freestyle Pro Tour. 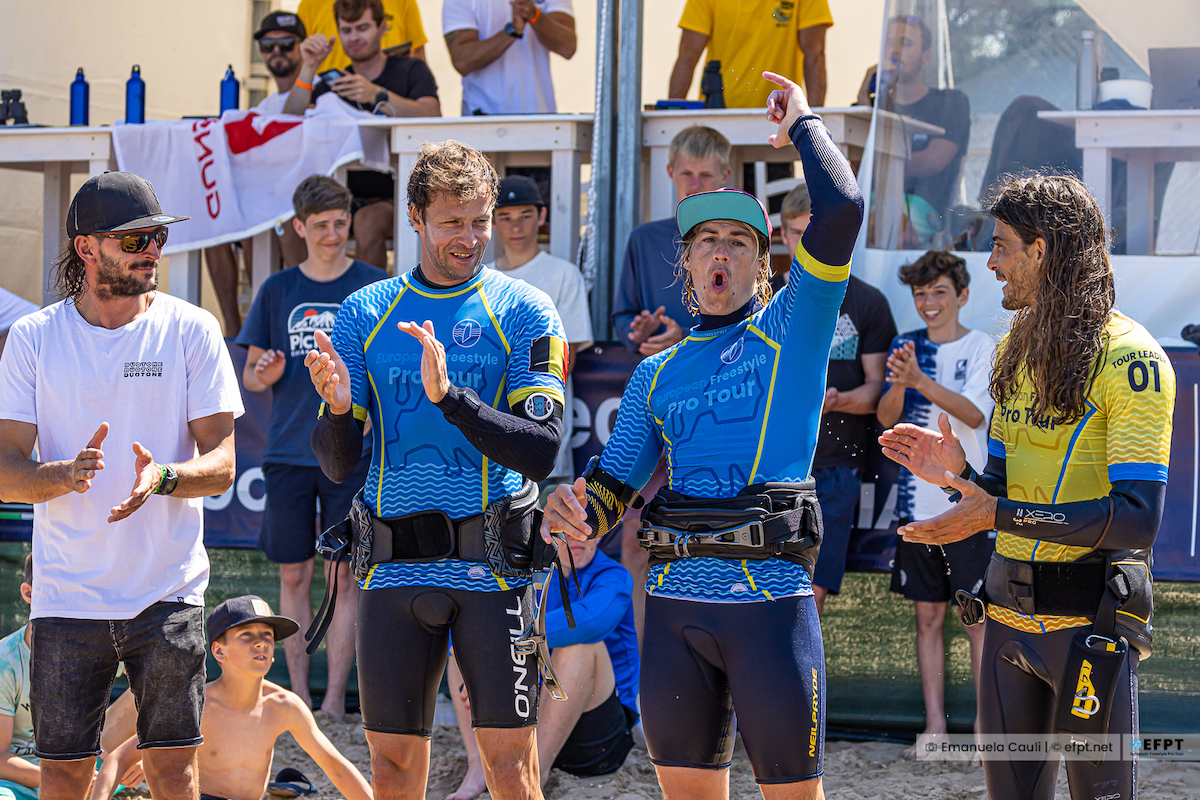 With sublime conditions forecasted for the day, all riders in the quarter finals were expected at the beach bright and early. Unfortunately the wind came from a slightly unfortunate direction, meaning another waiting game ensued. With cross-offshore conditions, down-the-line wave riding was on the menu for many riders who went out for a practice session. Soon enough though, the call was given and the first quarter finals were ON!

In the opening quarter final Youp Schmit was up against Yentel Caers. Schmit came to the event determined to win, and, judging from Yentel’s relieved look after the heat, the Bonairean gave Yentel a hard time during their showdown. In the end he missed out on one move on his scoresheet and was eliminated by the on form Belgian. In the second quarter final Dieter van der Eyken (Severne Windsurfing) took on current Vice-World Champion Adrien Bosson (Fanatic/Duotone/MUF). In an extremely close heat, only half a point separating the two, frenchman Bosson took the victory with a couple of 7+ point moves. 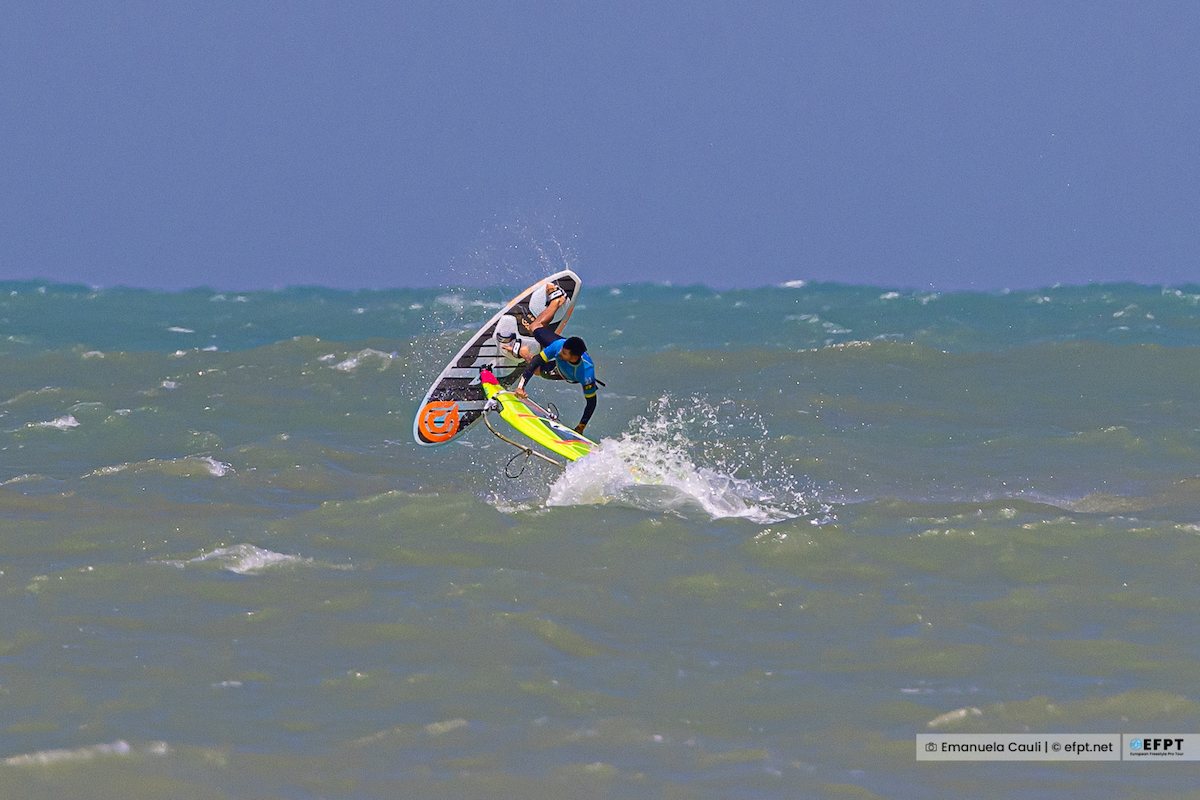 During the third quarter final Sam Esteve (NeilPryde/JP) faced Steven van Broeckhoven. With very tricky conditions, both riders started looking beyond the edges of the competition area for wind, with Esteve even having a move deleted for it being too far away for the judges to properly score it. In the end it was van Broeckhoven who dealt the last blow in the exchange with a Culo 360 in what was yet another close heat. In the last of the quarter finals Jacopo Testa and Antoine Albert (Goya Windsurfing) were also struggling with the conditions. Their first heat was cancelled and after a short wait the riders got back in the ring. Testa came out on top in conditions that, to Alberts dismay, might have even been trickier than the ones in their first confrontation.

In the semi finals the margins were a lot wider. Testa and Caers comfortably passed their heats to claim a spot in the winners final. Bosson and van Broeckhoven were left to battle it out for third. In the semis we saw a lot more Shifties coming into play as the athletes realised that they are not going to advance anymore without taking risks. Especially Bosson’s shifty in this round was impressively high, although he did not score too well due to a messy landing. We also saw a lot more tactical sailing, specifically in the heat between van Broeckhoven and Testa. The two tacked and jibed a lot, indicating that both clearly knew on which tack they still had points to gain over the other rider. 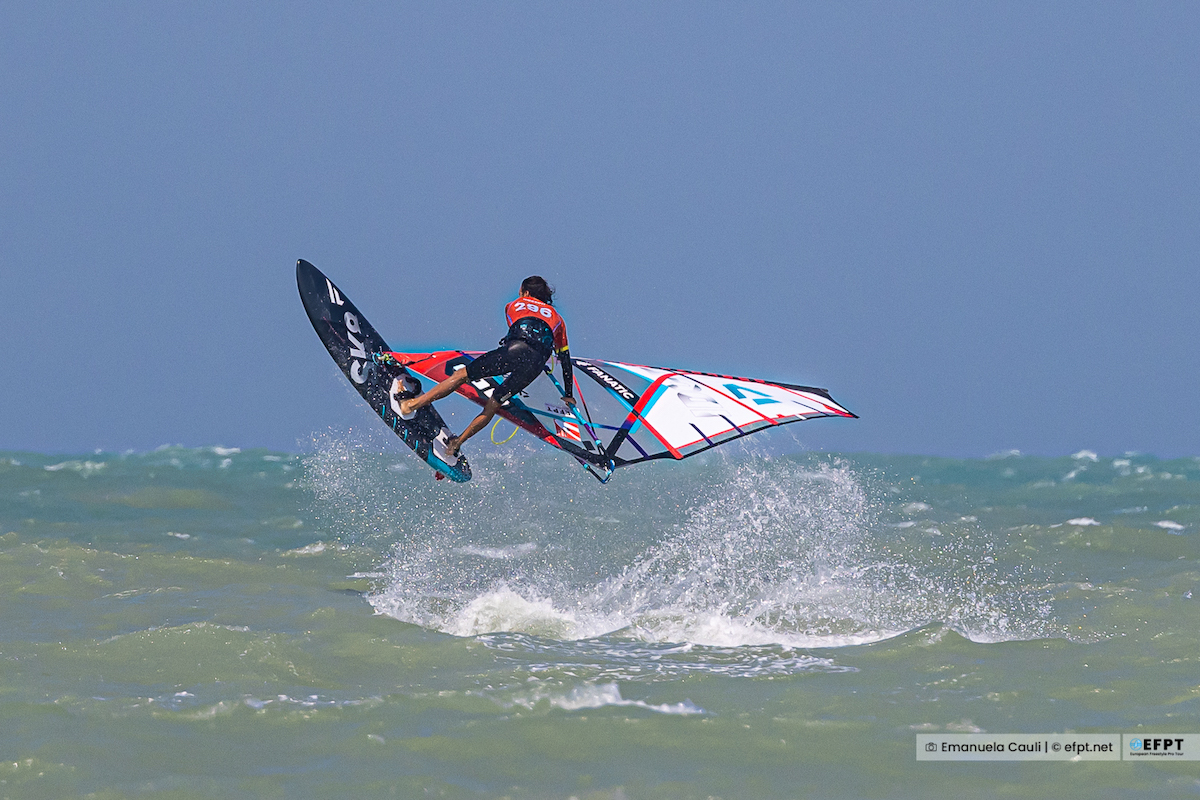 Did someone say Shaka? Adrien Bosson flying through his semi-final heat

In the small final Steven van Broeckhoven dominated. He scored 8 points with a massive Shifty as Adrien Bosson was struggling to keep upwind while attempting to fill his porttack scorecard. This was no problem for the immensely experienced Belgian who sealed the deal to get on the podium with beautifully technical Pushloop. Rewatch the entire small final below:

Did Jacopo Testa crumple under the pressure of being the tour leader? The usually ever-relaxed Italian struggled to put his final heat together, while Yentel Caers stomped a couple of 7 point moves. Even with the 10% diversity fine the Belgian received for doing too many similar moves on his jumping tack, he still gathered almost double the amount of points his opponent did. After returning to the beach, both riders were welcomed with cheers from the crowd, as announcer Robert Hofmann revealed the results. Rewatch the action of the final heat of the Single Elimination below:

With the Single complete, the fleet went straight into the Double Elimination. All riders get a second chance to fight back in the ranks and as long as they don’t lose for the second time, they are still in the event. With deteriorating conditions only a few heats were run. Standout rider in the double was Primus Sorling (Starboard/Severne) – the 15-year-old taking his maiden win in the Pro men’s fleet against UK sailor Aaron Smith (F2 Windsurfing).

With another day of promising conditions ahead, hopes are high to finish the Double Elimination. Will Caers defend his top spot? Who will rise through the ranks and cause some upsets? And what moves will we see? Tune in to our livepage tomorrow to find out!