When the new tow-in Airstyle format was introduced at the EFPT Silvaplana event it was an experiment to see if the discipline can be brought to new heights. It’s now safe to say that the results of that experiment have exceeded all expectations. The tow-in finals on day 3 of the EFPT Geneva were extremely exciting and full of variation. Some true crowdpleasers were thrown down and at the end it was Yentel Caers (JP/NeilPryde) who took the tow-in win after the Air, Combo, Regular and Send rounds! 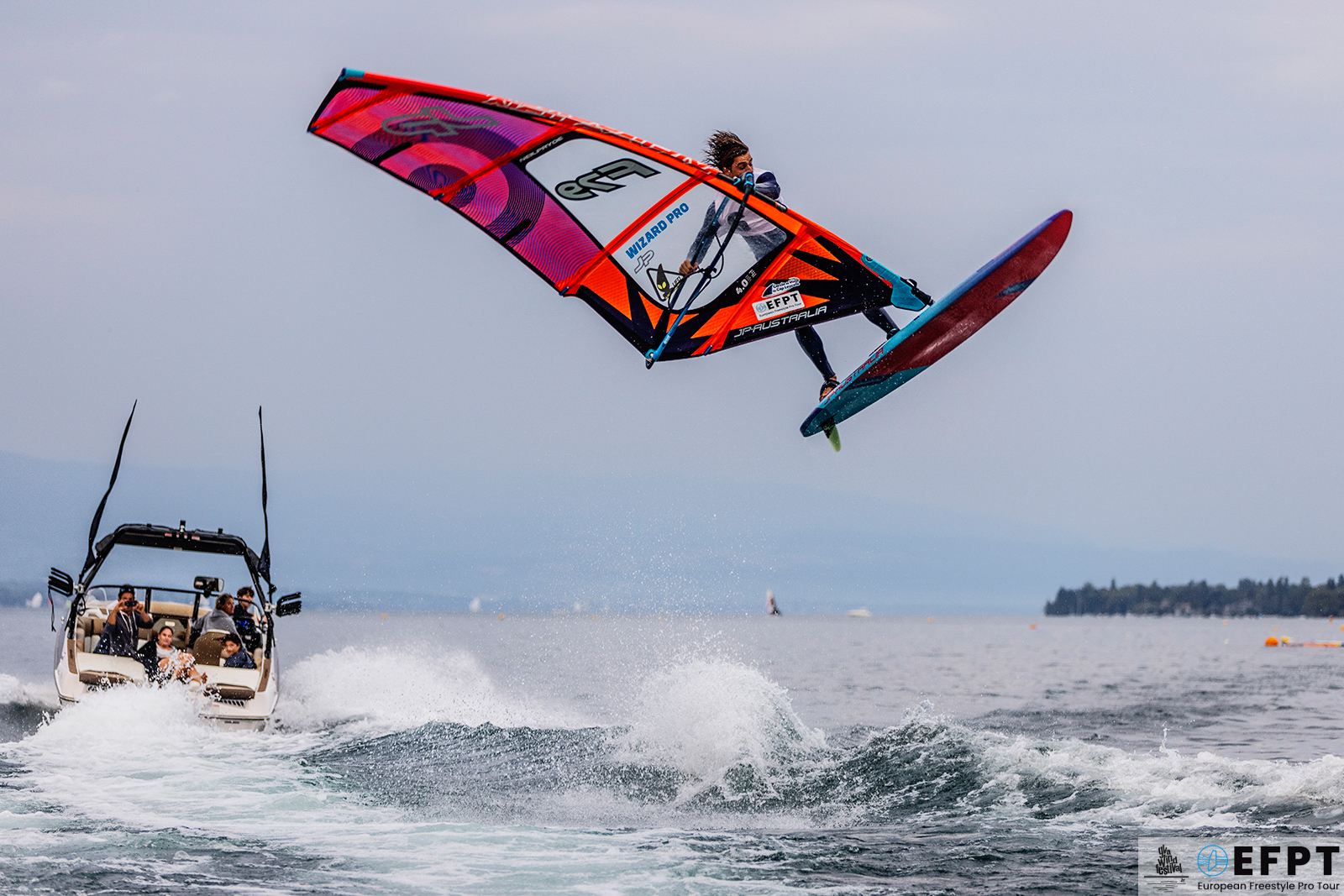 Sam Esteve getting some AIR! Picture by John Carter.

In the air category, judges measure the time a rider is in the air to determine the score. As after each round one of the riders was eliminated from the final, it was crucial that the athletes went all out from the very beginning. The first one to lose out? Adam Sims, who wanted to play it safe with a Culo but ended up getting the least air. Foivos Tsoupras impressed with a vertical switch Kono, which is a move that definitely creates the impression of height when done right. All the other athletes went with moves that started with an Air Funnel, as this move generates the most lift off of the wave. Yentel Caers even went as far as scoring a perfect 10, setting himself up for dominance in the final.

Popping between moves was the objective for the next round. The Combo category did not incite much variation, as all riders were going for the old Air Funnel Burner without the wave. Jeremy Plüss unfortunately crashed on his first rotation and was therefore eliminated. Lennart Neubauer, current tow-in championship leader, ended up doing the best rendition of the move, starting to form a threat to the then already leading Belgian Yentel Caers. 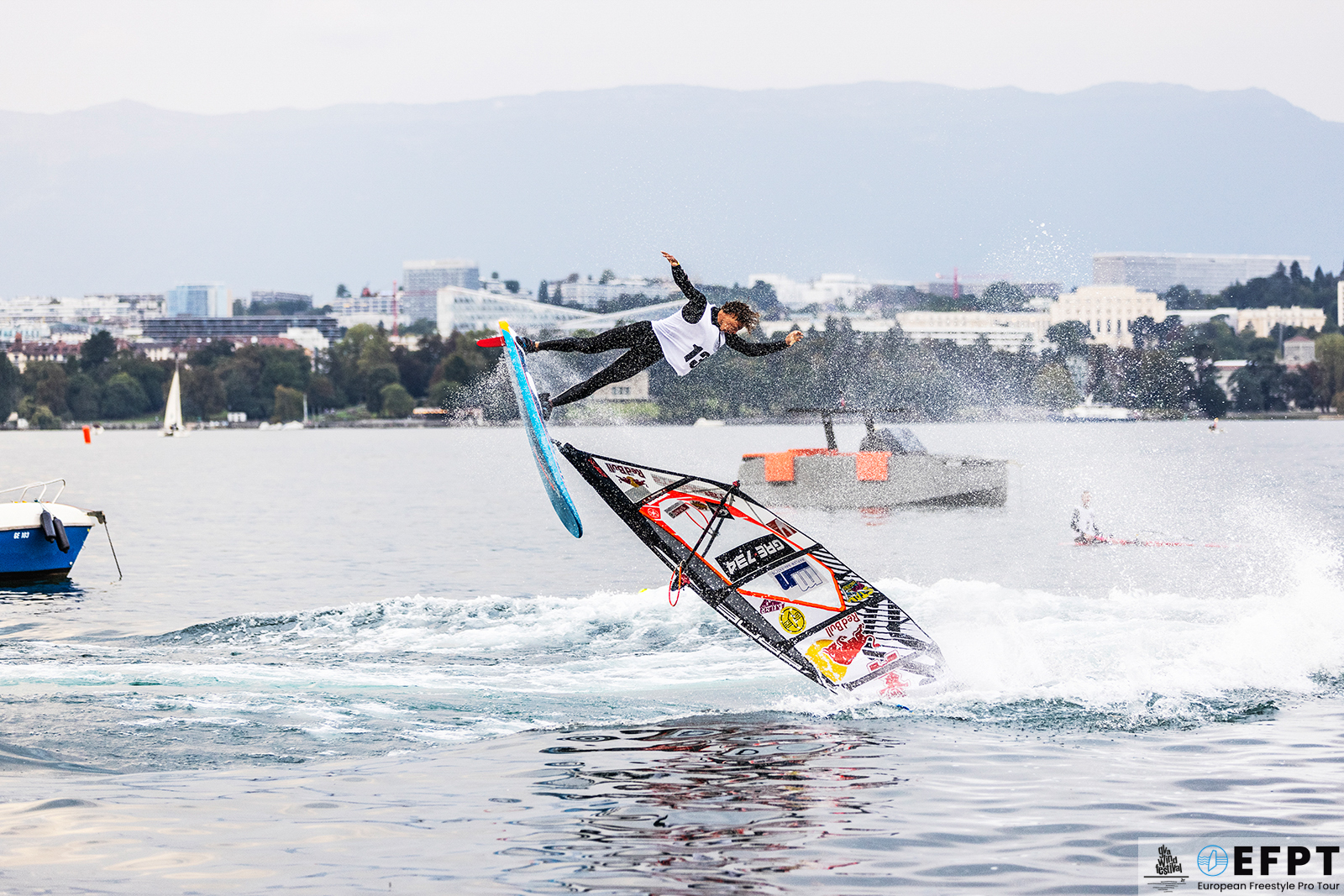 Lennart Neubauer truly sending it in the last round of the final. Picture by John Carter.

The next category was Regular. All switch moves were off the table, which for some riders was quite a challenge. Both the young Lennart Neubauer and Foivos Tsoupras were struggling and in the end it was Tsoupras who was shown the door as he was the only rider that did not manage to initiate a full double Air Culo.

With three riders left it was time to decide the podium by sending it! Neubauer went for a no-handed Burner with a precarious landing, leaving many to wonder whether the 17-year old was in one piece. Luckily no harm was done and the competition was resumed. Sam Esteve (JP/NeilPryde) attempted his signature move, the SamAir 2.5 air rotation, with a twist, taking off one hand as he initiated the move. Even though he did not land it, the judges rewarded him handsomely. It was unclear what Yentel Caers was trying to achieve, but the crash was spectacular. He later revealed that he was trying to go for an Air Burner Diablo. 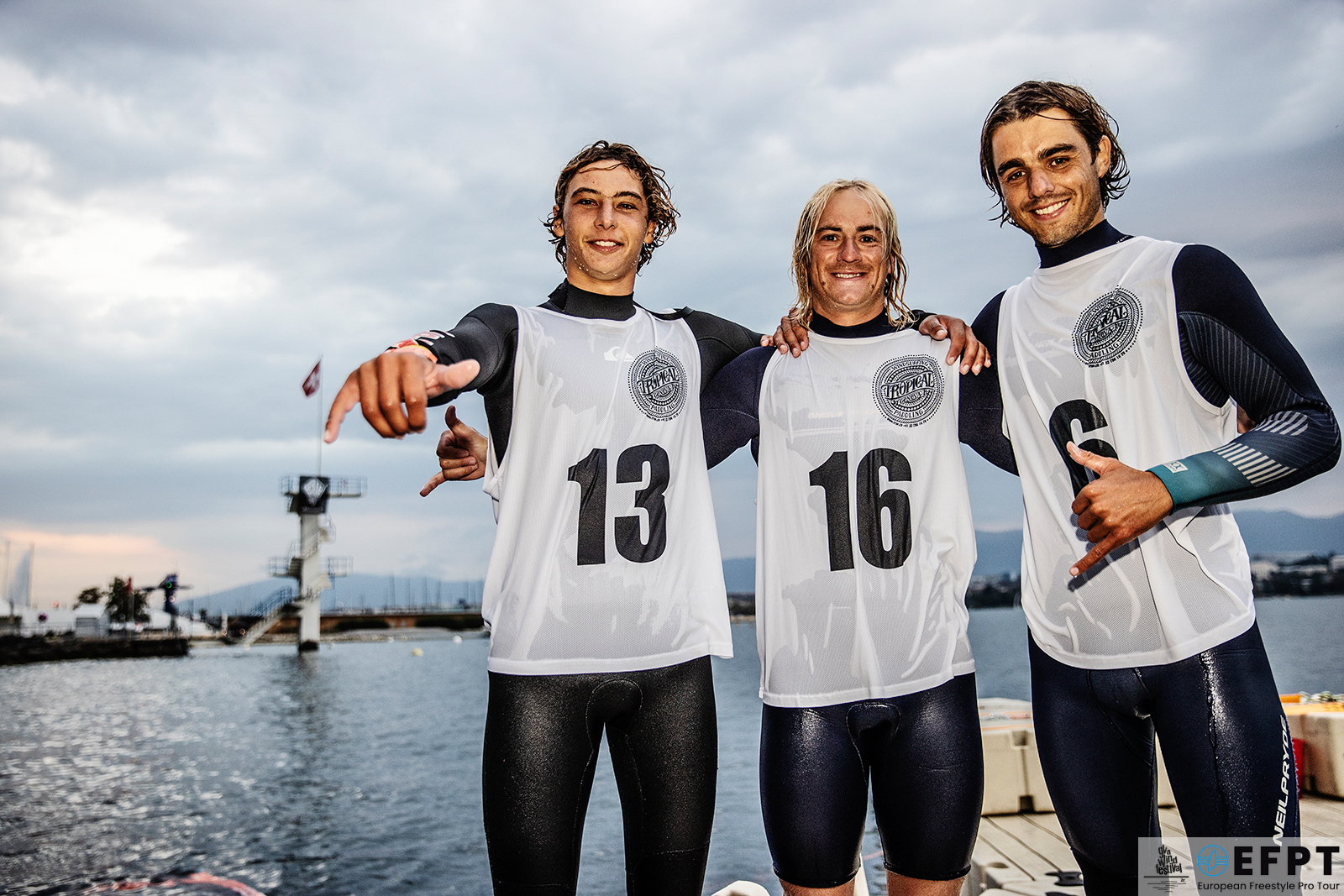 In the end the top 3 riders were within 2 points of each other, signifying how close the level at the top has gotten over the years. Yentel Caers was victorious, with Lennart Neubauer following in close second. Sam Esteve closed off the podium despite winning the qualification the day before.

All the riders went for a victory lap to give the crowd gathered at Tropical Corner an even more complete show. In this bonus round, which was not counting towards the results anymore, we saw the cleanest SamAir ever thrown down and of course a classic cannonball form Yentel Caers. Just take a look at the picture below: 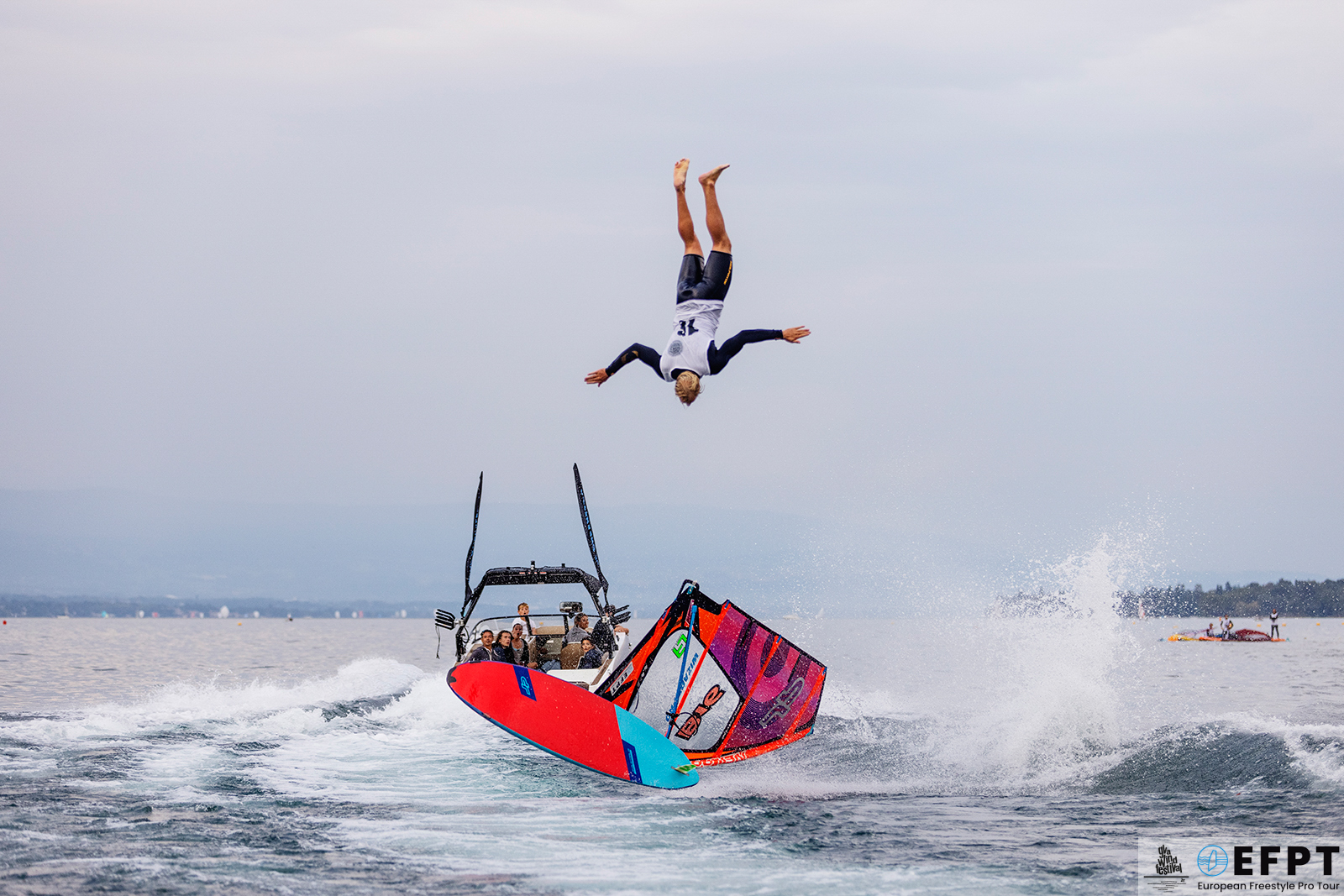 Who needs their gear to send it? Yentel Caers praying he won’t hit the gear on his way down. Picture by John Carter.

Tomorrow will be the final day of the EFPT Geneva event. With a promising forecast it might finally be possible to run the Foilstyle division. Riders are set to meet bright and early to maximise the opportunity for a result. Make sure to tune into our social channels or efpt.net/live to stay updated!

Rewatch the 1 hour-long WindsurfingTV livestream of the finals here: