Tow-in action on the third day of the 2022 EFPT Surf Opening in Austria. All hopes for finishing the double were quickly shattered and a long cooldown after an action packed previous day began. The afternoon brought the return of the infamous Tricks for Cash tow-in discipline. Riders got to impress the judges, but instead of scores, they got euros tucked into their wetsuits. Watch the highlights from a dazzling show and read on to find out who bankrupted the judges this time…

With a relatively early start of the day, the race crew was hoping to get the last 10 heats in that were needed to get an official result from the double elimination. Unfortunately the wind didn’t quite kick in which, paired with the warm sun, lead to the judges and athletes getting a well deserved rest around the competition area. Towards the tail end of the day, accompanied by the beautiful Burgenland sunset, everyone was awakened from their slumber to enjoy some freestyle action without wind: the essence of the tow-in discipline. Starting with an open practice for all the riders, the water was lit up by not only the sun, but also some radical freestyle moves. 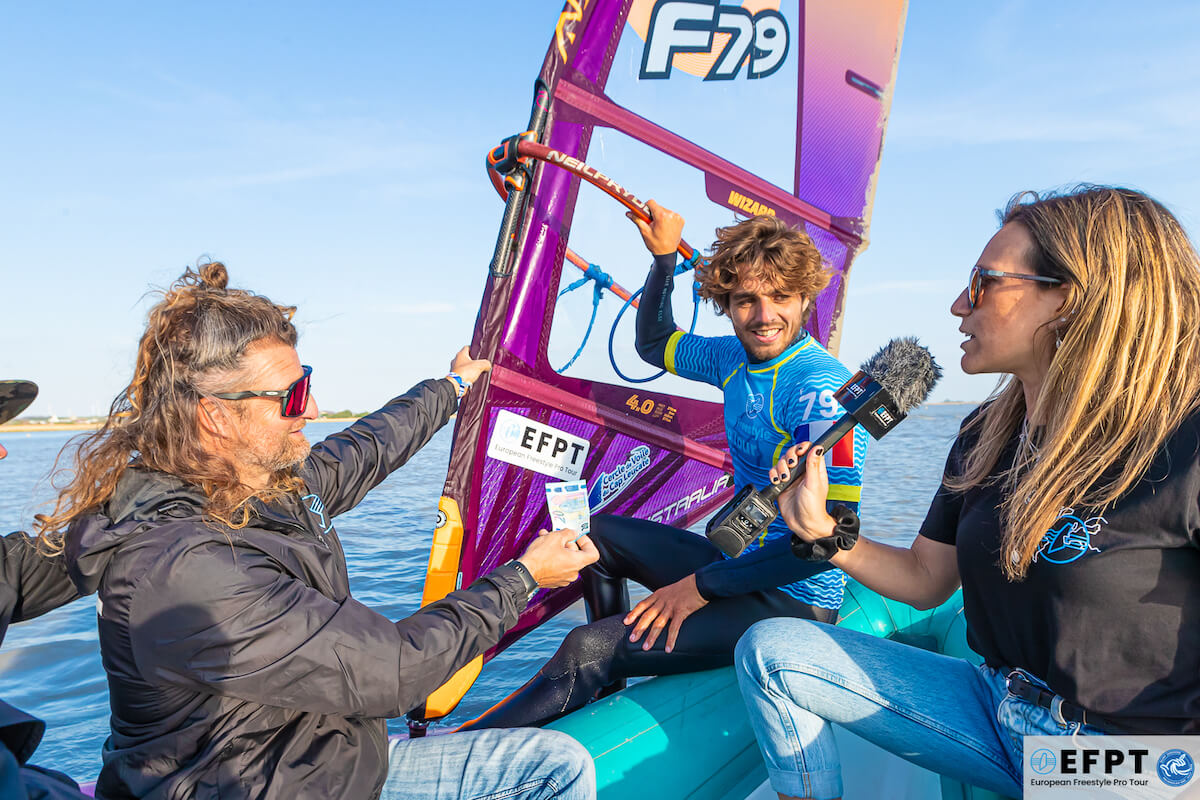 The organisers put together a tow-in invitational. Eight riders took to the Neusiedlersee stage in fashion, as the crowds cheered along to an exciting display of the latest in freestyle windsurfing. Antoine Albert (Goya Windsurfing) put down a feat: one of the best, or should we say first, Shaka’s ever seen behind the boat. He then went on to attempt what some claim to be a tow-in forward loop, but others wrote off as a more conventional Skopu crash. Having a big payday as well was Foivos Tsoupras (Fanatic/Duotone/MUF) who showed off his signature tow-in move: the Caña Brava. Local Maurizio Moritz (Fanatic/Duotone/Maui Ultra Fins) also took to the water to show off his freestyle skills. 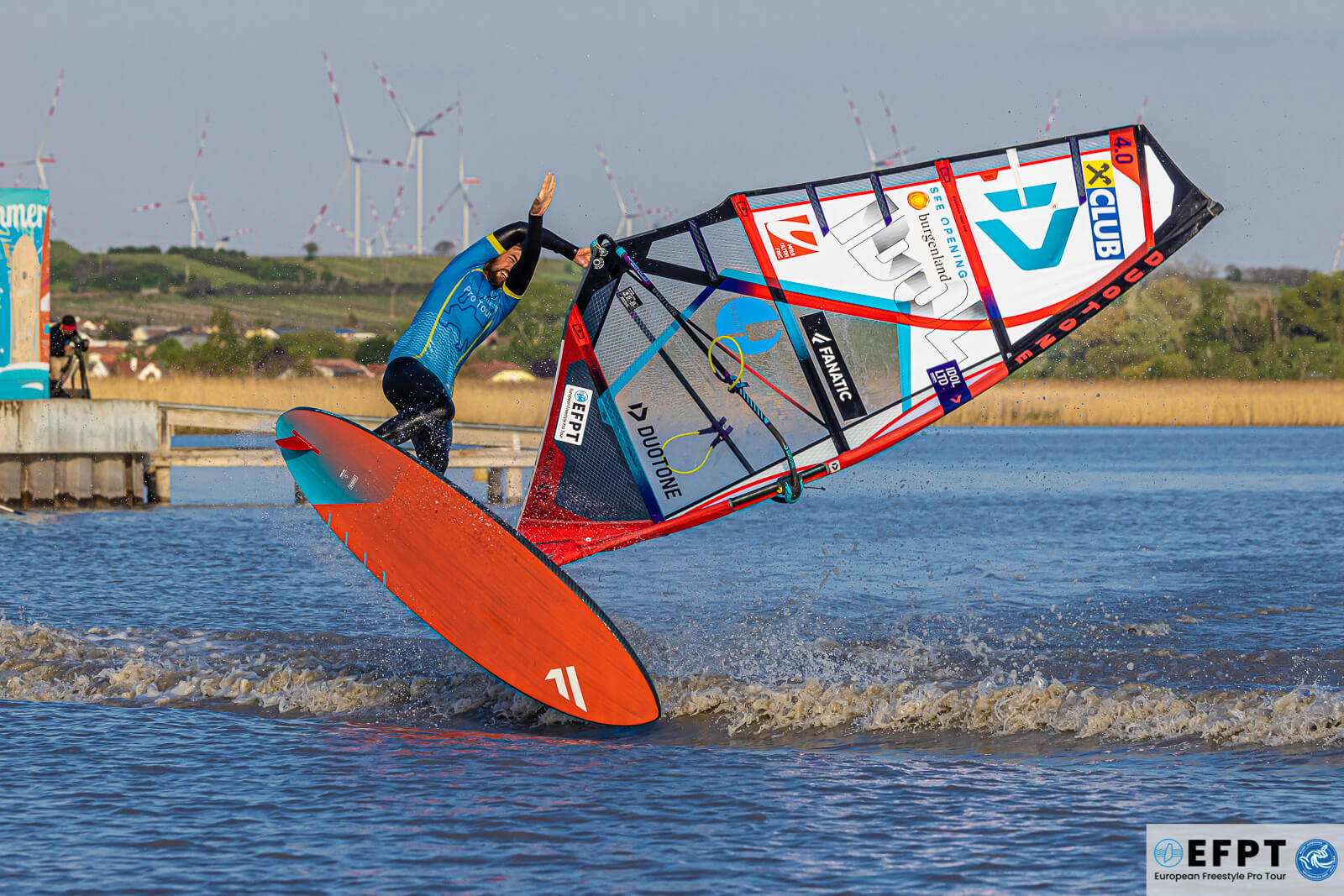 Representing the girls was Slovenian ripper Lina Erzen (Duotone) who put a few of the guys to shame with some massive burners. Furthermore, she was the only rider trying to do a combo move utilising the wave on the second pop. Although the timing wasn’t quite right, her intentions surely were. Tim Gerdes, another younger rider in the line-up, was clearly inspired by Yentel Caers going for a massive cannonball. During the interview with our on the water reporter Greta Marchegger (JP/NeilPryde) he was still a bit winded from the crash, but he was definitely rewarded for it by the judges.

Two riders who were in a league of their own were Sam Esteve (JP/NeilPryde) and Adrien Bosson (Fanatic/Duotone/MUF). The judges did comment that their moves were a bit boring for their caliber, as we have come to expect pristinely clean double rotations from them, the crowds on the beach seemed to think different, as their cheers forced to judges to empty their pockets on the spot. The multiple rotation ranks were joined by Niclas Nebelung (Fanatic/Duotone/MUF) who managed to complete a double Air Funnel into Burner during the practice session leading up to the show. 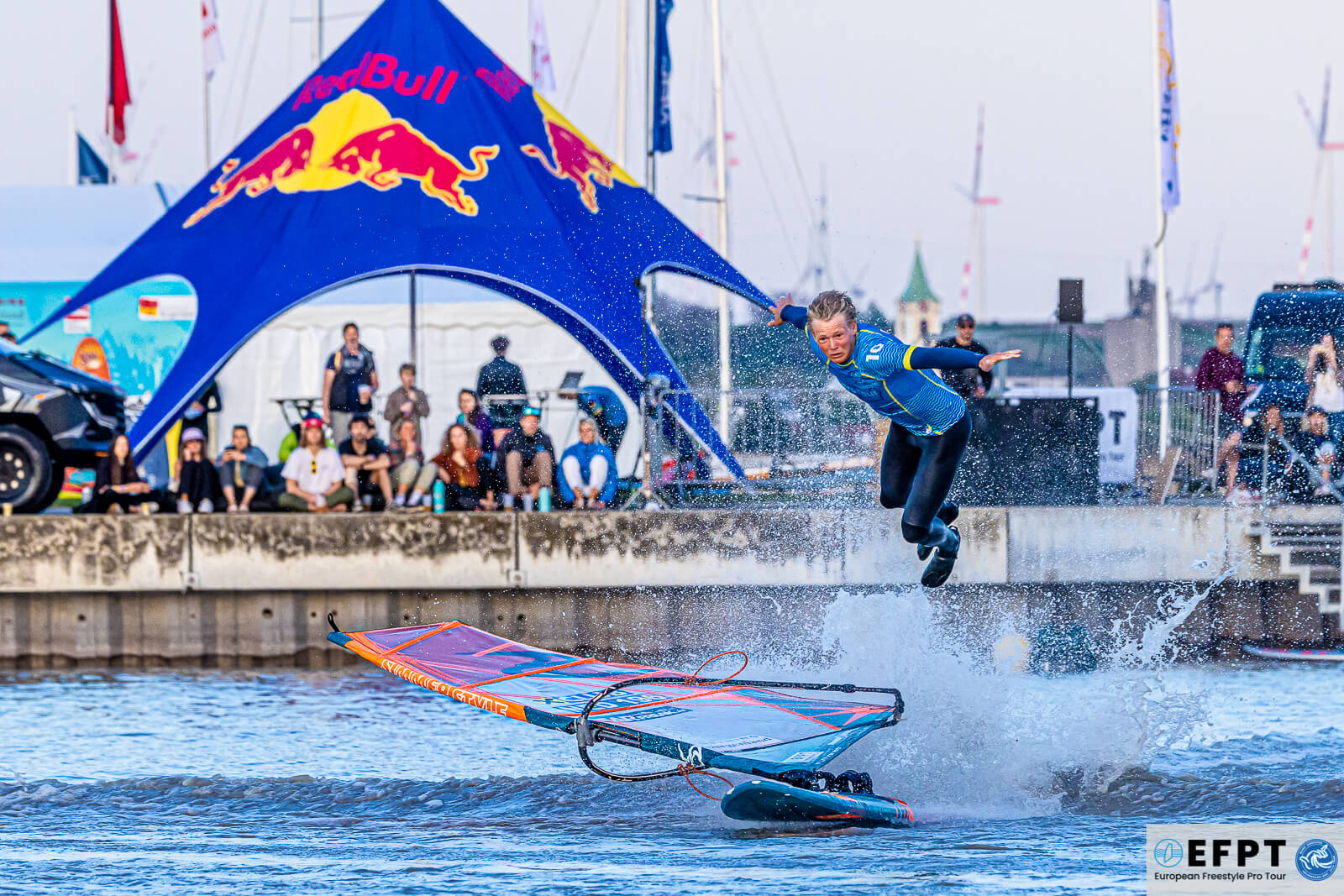 That was all the action for today! Tomorrow we expect to be enjoying another tow-in show with another stacked fleet of Europe’s best freestyle windsurfers. Tune in at 17.00 for the official show on our livestream!

Rewatch the full livestream from the Day 3 Tricks 4 $$$ session here: