On the final day of the 2022 EFPT Vieste the Double Elimination came to its culmination. Italian Jacopo Testa (AV-Boards/Point-7) fended off Steven van Broeckhoven (Starboard/Gun Sails) and went on to win the Double Elimination against Yentel Caers (NeilPryde/JP). An action-packed Super Final ensued to determine the event win. Testa came out victorious while being cheered on by his home crowd on the beach. With a plethora of high scoring moves on both sides of the final, this is sure to be a day for the freestyle windsurfing books. Read on to follow the road to the finals yourself… 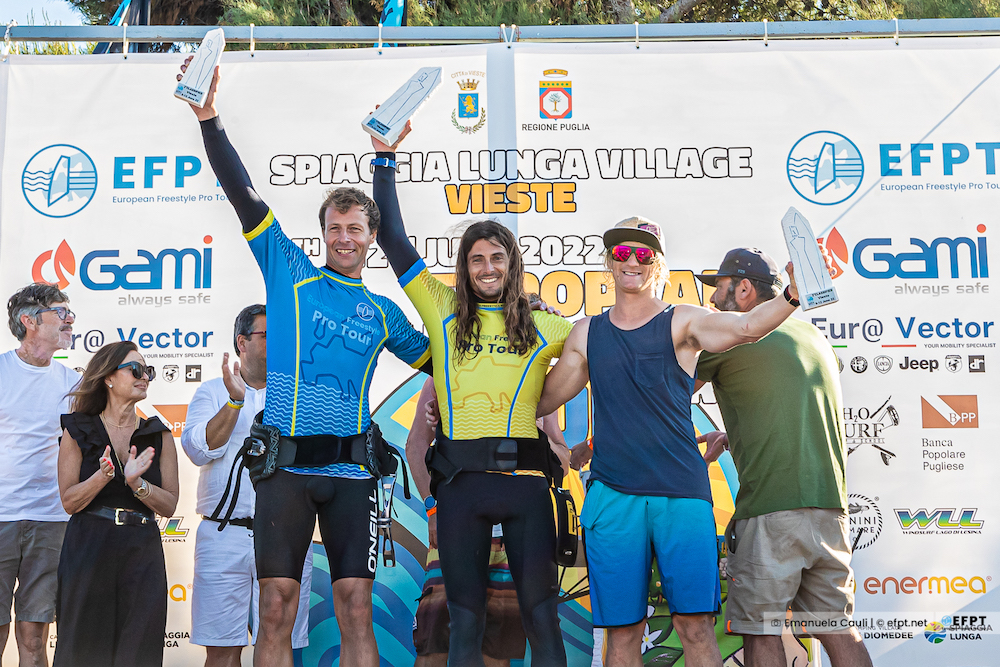 When the event was about to begin the forecast for the last day did not look promising at all. As the days progressed, the weathermen adjusted their predictions, leading to a suitable closing day on the sunny shores of Vieste, Italy. The first green flag went up at midday, and the Double Elimination was resumed were it left off the day before. Primus Sorling (Starboard/Severne) almost continued his winning streak but lost out by a fine margin to Tigo Kort (NeilPryde/JP). In another heat George Grisley (JP) had a really close heat with Michi Czech (Severne), and if it were not for a crashed Ponch he would probably have made it. Another interesting heat took place between Bodhi Kempen (Severne Windsurfing) and Italian Eugenio Marconi (Duotone/Fanatic). After trading the lead back and forth, Kempen came out on top against all expectations.

The biggest upset of the double must have been Ilay Bamnolker (F2 Windsurfing) winning against Felix Volkhardt (Severne/MUF). The two sailed a close heat, and after the judges reviewed the scores a resail was necessary to determine the winner. In another nailbiter of a heat, were both riders put together their highest scores of the event, Bamnolker came out on top and continued his run to Volkhardt’s disappointment. 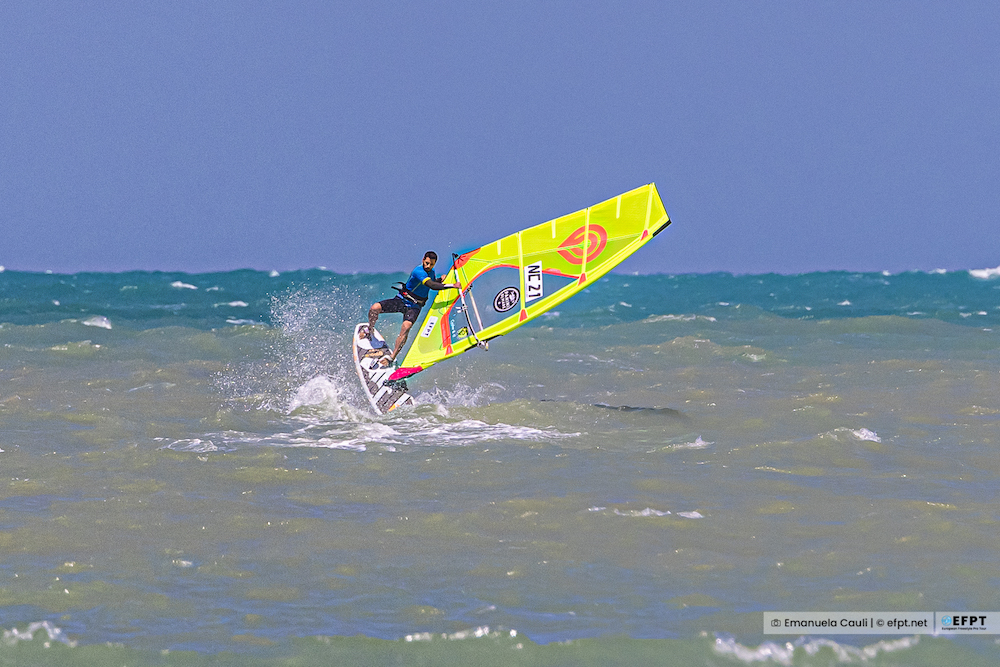 Antoine Albert during one of his Air Chachoo’s – a move that in conjunction with Kabikuchi’s on both tacks, were his go-to heat strategy

Another highlight as the rounds proceeded was Antoine Albert (Goya Windsurfing) who eliminated Michi Czech (Severne) and Sam Esteve (NeilPryde/JP) with a series of Air Chachoo’s and Kabikuchi’s. In the end he was stopped though by an on form Dieter van der Eyken (Severne), who had just eliminated Youp Schmit in his heat prior to that. The Belgian has shown a very methodical and experienced approach to his heats, always consistently improving his score move by move towards the end of the heat. He never led out of the starting blocks, but always managed to come out on top. In his heat against Albert he gave him a taste of his own medicine, by stomping a clean Kabikuchi to take the heat win.

In the battle for 4th the level rose considerably. There was no messing around anymore as both riders realised that there is no winning without risks. Adrien Bosson (Duotone/Fanatic/MUF) who was defending his position, dominated over a struggling van der Eyken on port tack. With an 8 point advantage just on that side, he secured his ticket to challenge for the podium places. Steven van Broeckhoven was already waiting for him and the two started what was a painstakingly long process to determine the advancing athlete. Due to deteriorating conditions their heat was cancelled twice. For the third attempt, race director Danny Kater increased the heat duration to 12 minutes, giving the riders enough time to catch the gusts necessary to perform their moves. Fatigue was showing though for current Vice-World Champion Bosson, as he was crashing a lot. He managed  to collect himself towards the end, but van Broeckhoven had already sealed the deal with a massive Shifty. 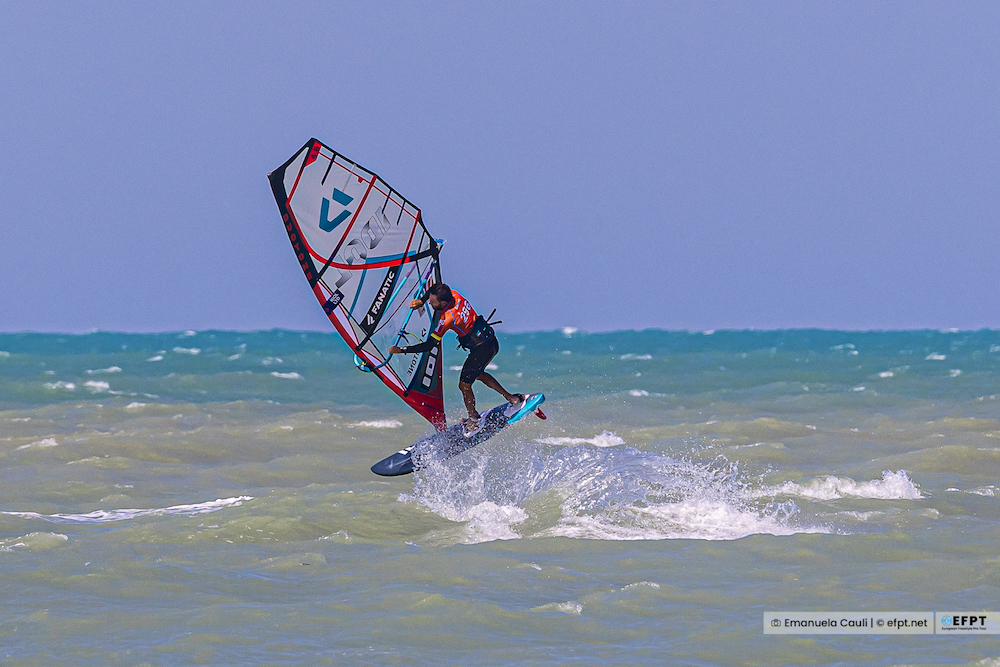 In the battle for 2nd van Broeckhoven suffered the same fate as Bosson in the heat before. Jacopo Testa was ruthless in his execution of moves and defended his position quite comfortably. A Triple Spock, a Pasko, a T-bone, a Bongka and a clean Double Culo were all in his repertoire. The current tour leader had a point to prove after underperforming in the Single Elimination final, and managed to take the win to get a chance at revenge.

The Double Elimination final ensued. Yentel Caers opened really strong on starboard tack, determined to cut Testa’s campaign short early as he took the lead during the opening of the heat. Testa found his rhythm again though, and put together a monster score, with a 7 point move average for his final score. With a Spock Kabikuchi in light winds that left the judges gasping, he secured the Double Elimination win meaning that it was now one a piece – Caers won the Single and Testa the Double. 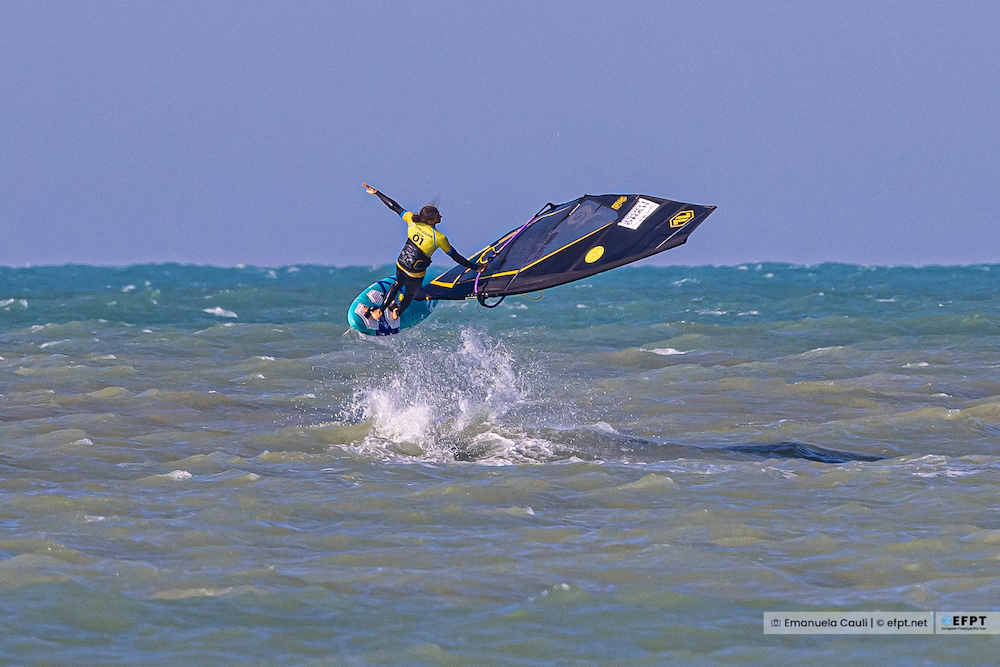 One Handed Burner by Jacopo Testa, a move that was part of his winning repertoire

To determine the event winner a 15 minute Super Final was now a reality. With Italian crowds lining the beach to cheer on their windsurfing hero, the green flag went up and the judges focused their binoculars. The action was very far out, with both riders pushing past the edges of the competition area to utilise every inch of wind available to them. Caers had assistance from fellow Belgian Steven van Broeckhoven who went out on another set of smaller gear in case conditions changed. Jacopo did not seem bothered and opened with a massive Bongka, while Yentel took a bit more time to get fired up. He quickly asserted that he was not to be discounted with a Pasko and Double Culo. Getting the right moves on porttack was the challenge for both riders, with Testa crashing three times on various moves. The standings were very close and it was only towards the very end that the current tour leader improved his starboard score enough to gain a 1 point lead. As Caers charged at a wave for what was presumably going to be another Shifty attempt, which we have seen him score over 8 points before, he catapulted spectacularly. The Italian crowds released a mix of cheers and relieved sighs as their iconic sailor was now clear of danger. Jacopo Testa took the Super Final win and thus extended his European Championship title race lead.

With the riders still in their wetsuits the prize giving was done there and then on the beach. Applauded by the masses the podium celebrated their achievements from the last action-packed couple of days. A special shoutout also went out to Adrien Bosson, who apart from being fourth, also won the best trick of the competition award for his Air Chachoo in the Single Elimination. As for Jacopo, he gets to keep wearing the yellow tour leader lycra as we gear up for our next event in Alacati, Turkey.

The Double Elimination Final and the Super Final will be available as a full re-watch at a later time.