The penultimate day of the 2022 EFPT Surf Opening in Austria saw another tow-in show entertaining the thousands of people visiting the Summer opening festival. With no perspective on finishing the double elimination today, all eyes were on 8 invited riders who were tasked with being as creative as they could be with their board and sail. The resulting display of freestyle fireworks goes to show that the tow-in discipline is not drained of innovation yet! Check out todays Highlight Clip and read on to see what our athletes have been up to this time at the Neusiedlersee.

On the main day of the Surf Opening event in Neusiedl am See, the beach was cracking at its seems. The crowds were first treated to a riders presentation on the main stage, before preparing to go in the water and showing everyone just why they are the best freestyle windsurfers in the world. The plan for the sunset session was the same as on Day 3 – Tricks for Cash. The infamous competition format sees the riders trying to impress the judges in any way, shape or form possible. With the towing rope tensioned for the first rider, it was time to send it! 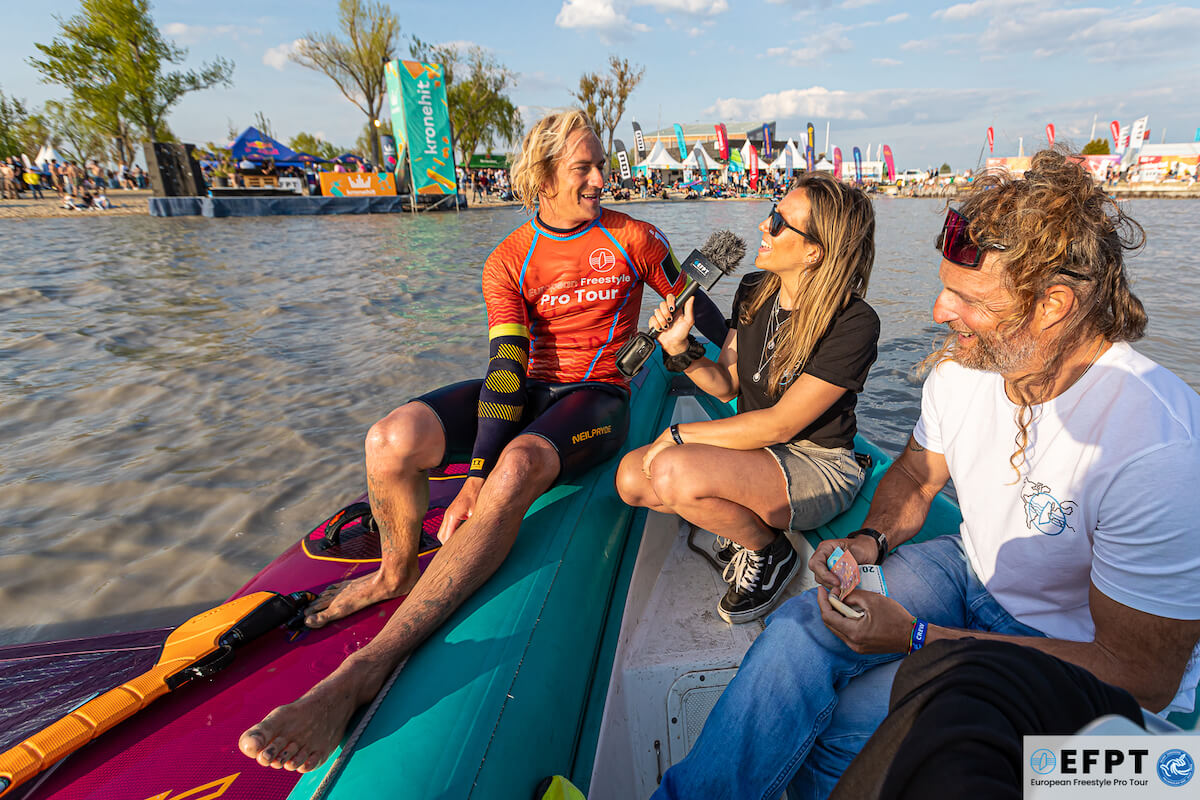 Yentel Caers was making a show as always

Tow-in aficionado Yentel Caers (JP-Australia/NeilPryde) was impressive but less consistent than usual. The Belgian struggled a bit behind the jetski, but it is important to mention that a worse day for Yentel, is still on a level unattainable by most riders on tour. Another rider slightly struggling, but still putting up an amazing show was Felix Volkhardt (Severne/Maui Ultra Fins). Last years most improved rider of the year award winner was going for airfunnel burner combo’s as he was roared on by the crowds on the beach!

Tigo Kort (JP-Australia/NeilPryde), the 17-year-old Junior from Brouwersdam, was definitely feeling nervous in front of the crowds. He assimilated to the pressure after a couple of runs and ended up stomping a Culo while taking off from the wake of the boat. Furthermore, the lift he was getting on one of his Air Funnel attempts was immense but resulted in an unfortunate crash. Another rider feeling the adrenaline rush of the audience was Maaike Huvermann (Severne/Maui ultra Fins) who is fairly new to the tow-in game. Representing the girls she gave the guys a run for their money, trying a Shove-it Spock which has not really been seen in tow-in before! 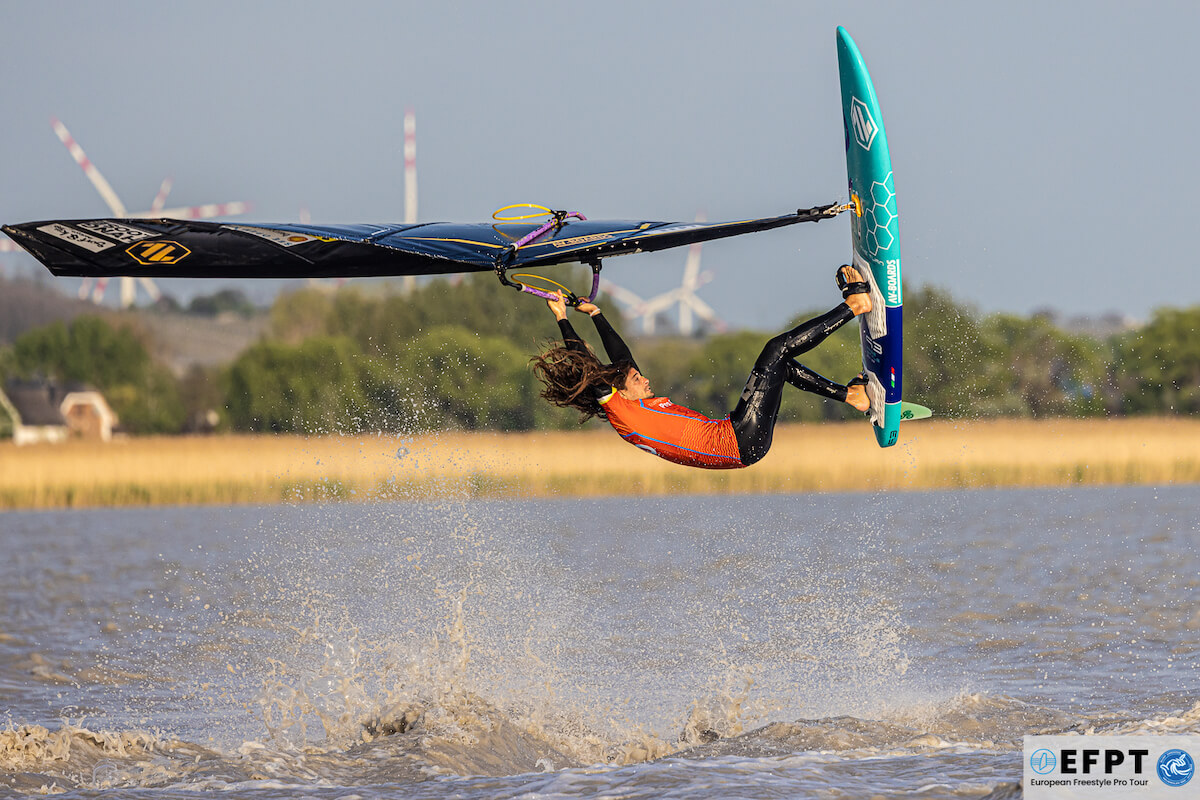 Jacopo Testa breaking tow-in boundaries with a first ever Kabikuchi

The lake was also lit up by local Michi Czech (Severne), who was going regular stance (a much harder approach to tow-in) in most of his runs. The Austrian threw down a Culo as well as definitely winning the crash of the day shout out, as he was bouncing across the water like a skipped stone. The energy Michi was radiating to his home crowd was mirrored by ever-stoked Mateo Testa (F2 Windsurfing). The Italian got a last-minute nod to enter the competition as one of the other riders pulled out. He did not hesitate and made sure to show off his repertoire of moves. Going for an Air Bob, a rather unconventional move, he caught the attention of the judges and was well rewarded.

Matteo’s brother, and current event leader Jacopo Testa (AV-Boards/Point-7) was on fire as well. Throwing down what might just be the first tow-in Kabukuchi ever seen in competition, he received maximum bills from the jurors. Steven van Broeckhoven (Starboard/Gun Sails) went down the brand new move route as well, stomping an absolutely perfect Shove-it Spock. Was he inspired by Maaike Huvermann in the runs before? Nevertheless, the cleanness of the execution cannot be overstated, as the Belgian displayed why he is seen as one of the most successful European freestyle windsurfers of all time. 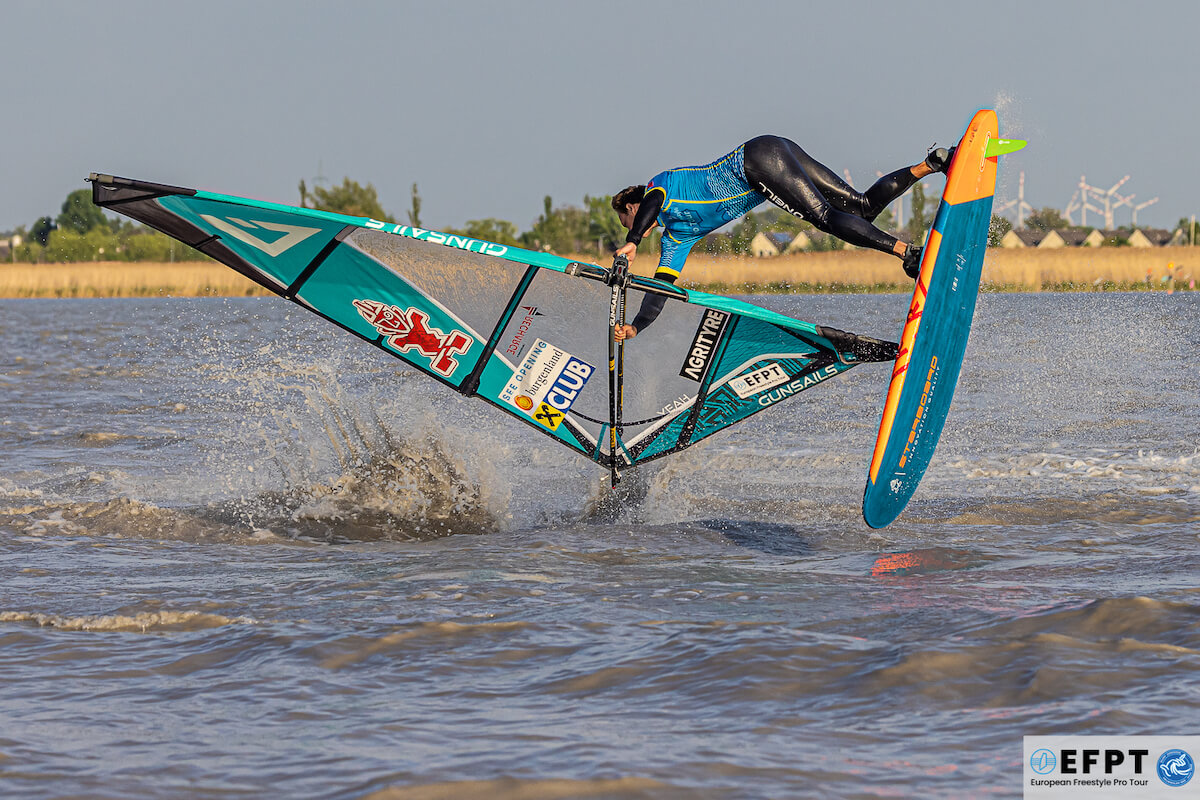 That’s it for the penultimate day of the EFPT in Austria. On the last day we do not expect to finish the double elimination, meaning that we will we do a post-event show on our channels. Tune in to review all the action from the event and watch the official prize-giving! We are live at 13:00, see you there!