Finals day at the EFPT Theologos 2021! With conditions forecasted to be similar to the day before it was clear that a good show was cooking up. What was on the menu? Finishing the Men’s double elimination and if possible run another single elimination for the Women’s and Junior’s. In the end it was Amado Vrieswijk (FutureFly/Severne) who claimed the victory, but it was not easy for him as another rider was storming up the ladder to challenge him in the final…

The day started with an attempt at running another single elimination for the Junior’s. With the wind picking up later than expected they were on standby for a while. When the youngsters finally got started it was immediately clear that the conditions were still too light. Even though Primus Sörling (Starboard/Severne) caused quite an upset, defeating Tigo Kort (JP/NeilPryde), the results were abandoned and the Juniors went back on standby. Half an hour later they were released for the day as the racing team prioritised the Men’s division which had no double elimination result yet. 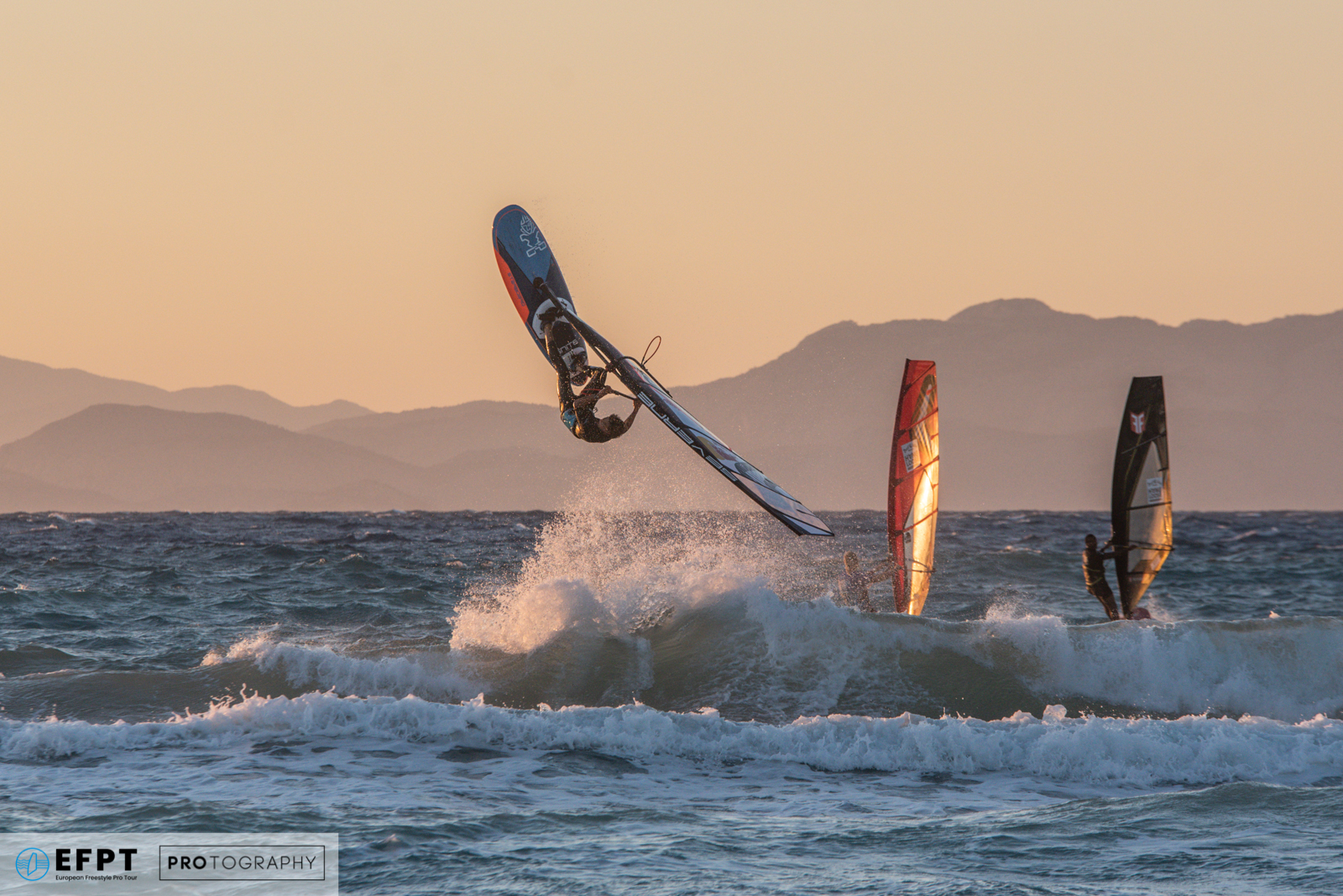 At 15.15 local time the conditions were finally sufficient for the ultimate showdown of freestyle windsurfing. Antoine Albert (Goya) went out first to test the conditions, and after returning to the beach to take a smaller sail the green light was given for the start of his heat against Sam Esteve (JP/NeilPryde). With a Kabikuchi on each tack, the New Caledonian took out Esteve and advanced to the next heat. In the other heats of this round it was Lennart Neubauer (Starboard/Severne) who stopped Matteo Testa’s impressive progression through the double elimination, and Gollito Estredo who took out an otherwise on form Youp Schmidt. In the final heat of the top 12, Yentel Caers (JP/NeilPryde) swiftly took care of Marco Vinante (JP/Point-7) in what was the beginning of a very long day for the Belgian. 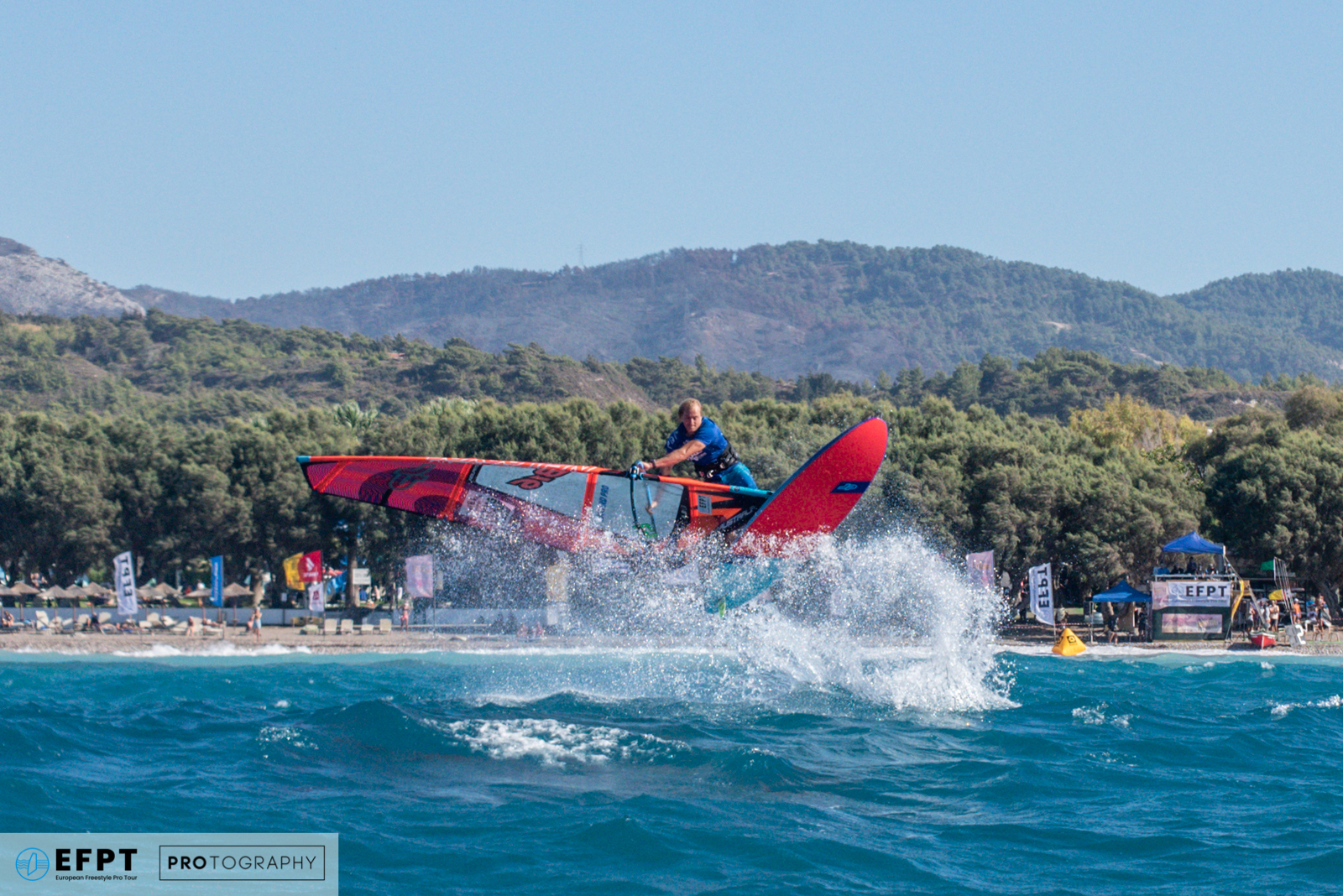 Caers went on a rampage through the field taking out the likes of Gollito Estredo (in a very close heat) and Lennart Neubauer. Due to technical difficulties with the scoring system, he then had to sail his heat against Dieter van der Eyken (Severne) twice. Coming out on top once again, it was up to Steven van Broeckhoven (Starboard/Gun Sails) to defend his podium position. In a close matchup, Yentel had to put down one of the highest heat scores of the event to advance once again. Having seen what Caers was up to, Jacopo Testa (AV-Boards/Point-7), who was defending his second spot, had to go all out. With a massive one handed Pasko, a variation on the move we don’t see often, the Italian made his final stand. The two riders were so focused that at some point they almost crashed into each other while exchanging moves. Nevertheless, Caers defeated Testa and went on to the final with Amado Vrieswijk. 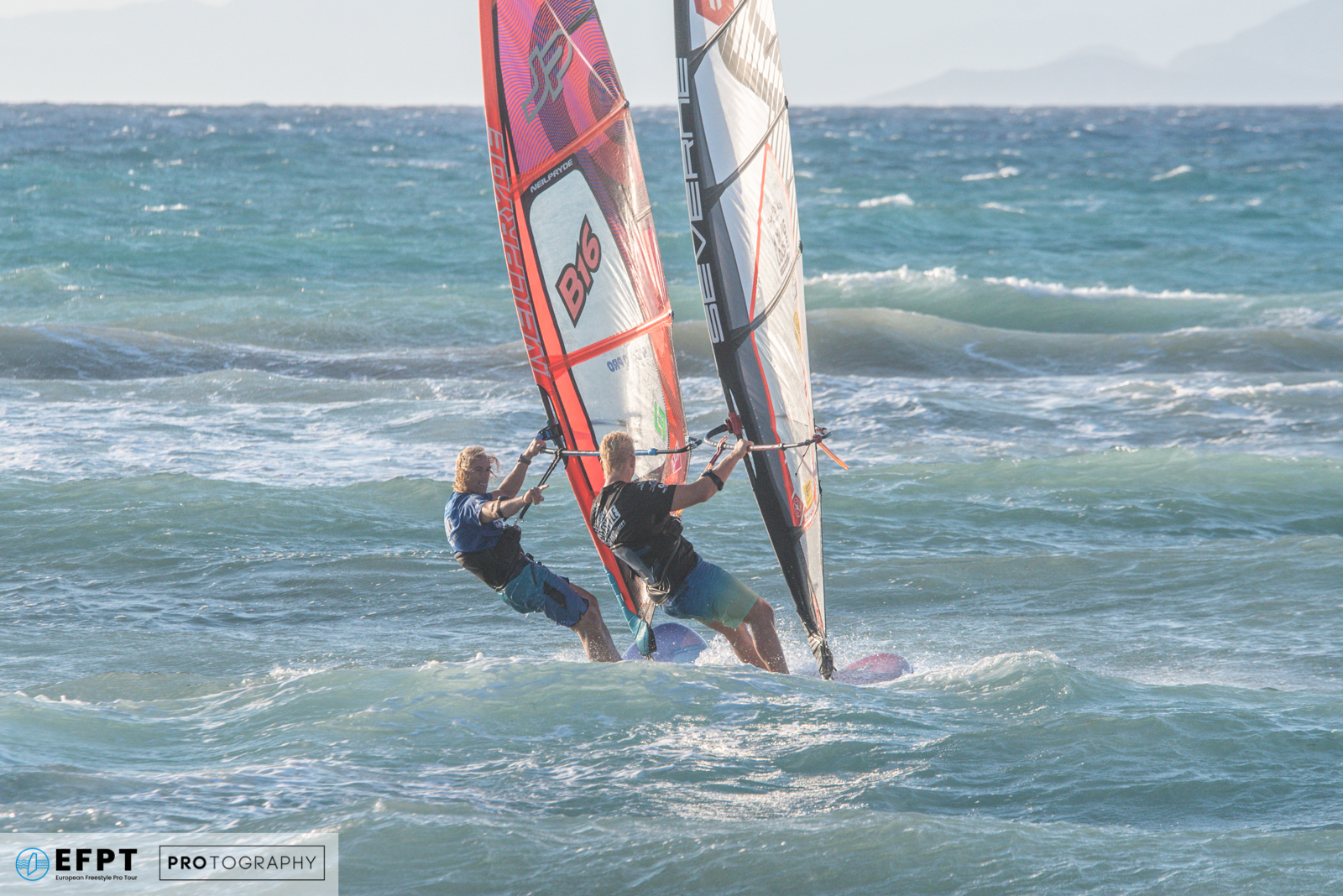 With 7 heats under his belt already, Yentel’s exhaustion was starting to emerge. It also did not help that the fresh Amado already got up to 40 points within the first 3 minutes of his heat. Although the Belgian defended really well on his incoming moves it was the big jumps where Vrieswijk dominated. Yentel finished his heat with a double Forward Loop attempt, hoping to catch up, but unfortunately crashes.  In the end it was the Bonaireian who defended his first position, relieving Caers from having to sail another heat in the super final. Amado Vrieswijk wins the double elimination, and the event, in a spectacular fashion. 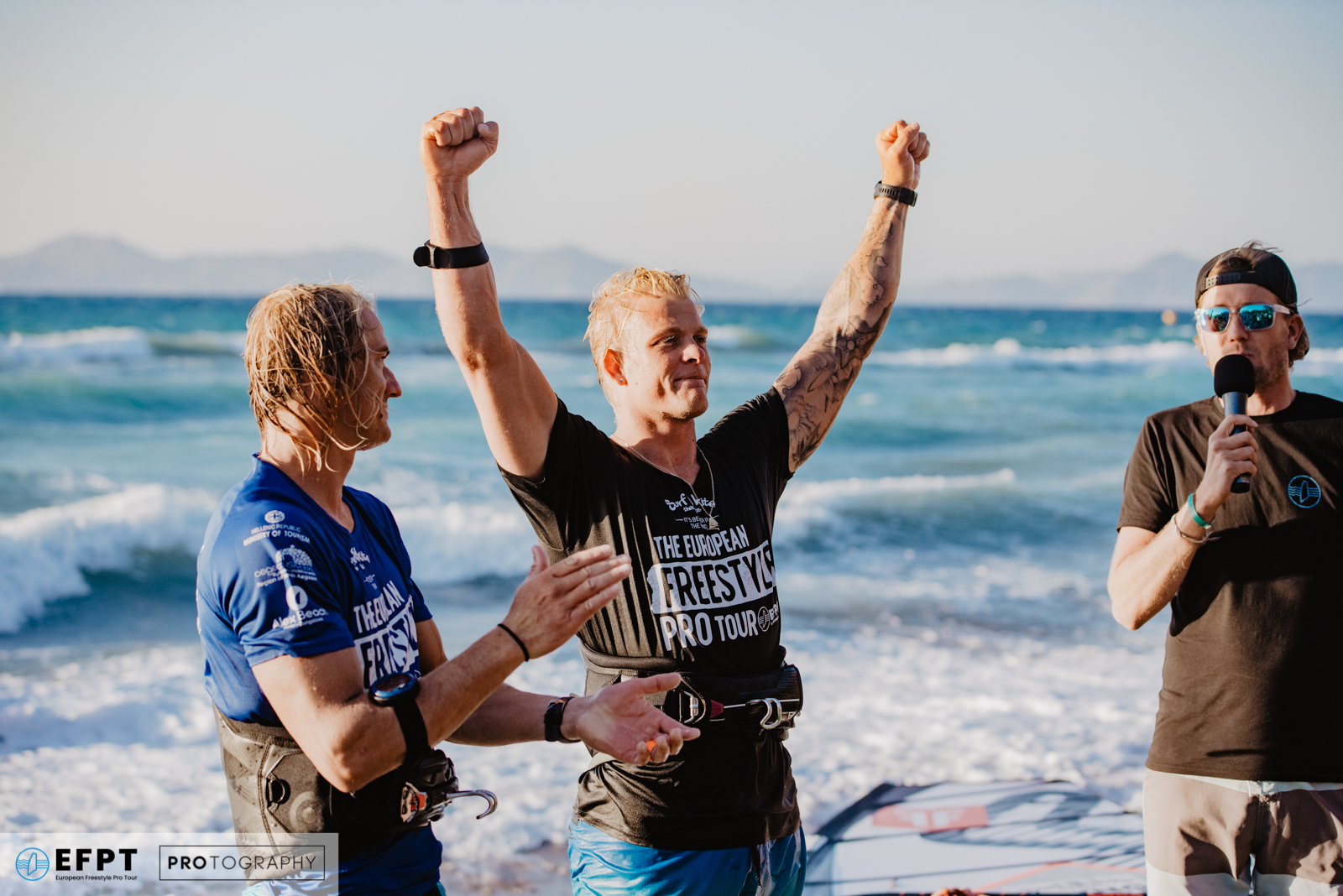 As the Men’s final progressed, the Women sailed another single elimination. The final result did not differ from the result of the double elimination, but it was great to see the girls improving in these difficult conditions, with Sterre Meijer (Severne) making Hanna Poschinger’s (Starboard/Severne) life a lot harder in the small final. Maaike Huvermann (Severne) took the win once again with Olya Raskina (JP/NeilPryde) holding onto her second position.