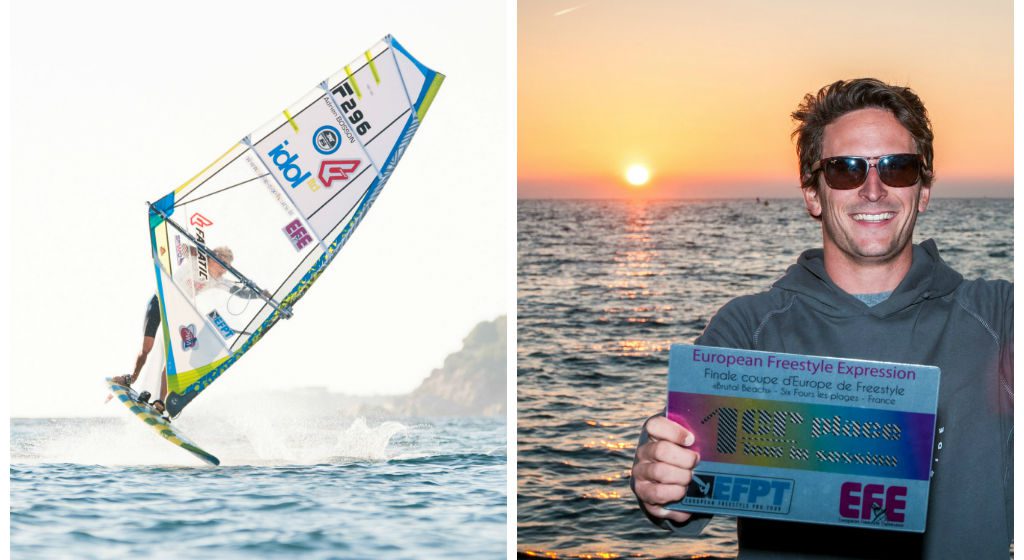 On day 3 of the European Freestyle Expression everybody who has been hoping for wind was unfortunately let down. With beautiful weather and light onshore wind though the conditions were perfect for the tow-in final in the afternoon.

After the annual riders meeting where the EFPT competitors were invited to give their feedback and exchange ideas about the tour with the crew, an autograph session has been organised on the beach, seeing a huge involvement of the public.

Just before the tow-in final started, three riders were asked to show the most common tow-in tricks (funnell, double funnell and burner) and Nico Akgazciyan was explaining it, giving the crowd a better idea of the discipline and the factors of judging. Right afterwards the ten riders who qualified in the two rounds yesterday were lining up for their three runs. The EFPT race-director Tom Hartmann decided to add the third round, to encourage the riders to take more risk and show new moves. This was embraced by current European Champion Steven Van Broeckhoven (JP/Neilpryde) who tried to duck the sail to go for a culo in his first run yet couldn’t get the take-off. It was quite a disappointment for the European tow-in champion when he also couldn’t land his second move. With his third attempt though the Belgian managed to pull the 5th place in the end.

Third place went to the Italian Mattia Fabrizi (North/Fanatic) who crashed his first two attempts but landed a perfect culo on his third try. The second place could be pulled by Bonairean Amado Vrieswijk (Starboard) who overscored his double funnell in the second round with a culo-diablo in his third. The atmosphere on the beach couldn’t have been better when the winner was announced: local boy and North/Fanatic international rider Adrien Bosson landed a clean burner-funnell which scored the highest of all the moves in the final. Hundreds of people were watching the show on the beach, cameras and cellphones were raised when the sailors came flying towards the beach behind the jetski. In the beautiful evening light the ranking was announced in front of the crowd that exceeded the audience from the last years by far. Since the riders were still full of energy and the spectators couldn’t get enough of them a sunset tow-in photo session has been set up. In the amazing light of the setting sun and with the help of the wake of a boat the sailors were airborne, with Steven Van Broeckhoven leading the way and showing his skills in the confident way that everyone is used to.

The last evening of the European Freestyle Expression will end with a community dinner at the event-site and the praying for wind for tomorrow. If the conditions won’t be sufficient until 3.00pm we will not be able to guarantee a result for this event.

Skippers meeting will be at 10.00am and we will see were we can take it from there. What’s for sure is the crowning of the European Freestyle Pro Tour Champion 2014 as well as awarding the 2nd and 3rd place overall tomorrow evening. Antoine Albert in the night session