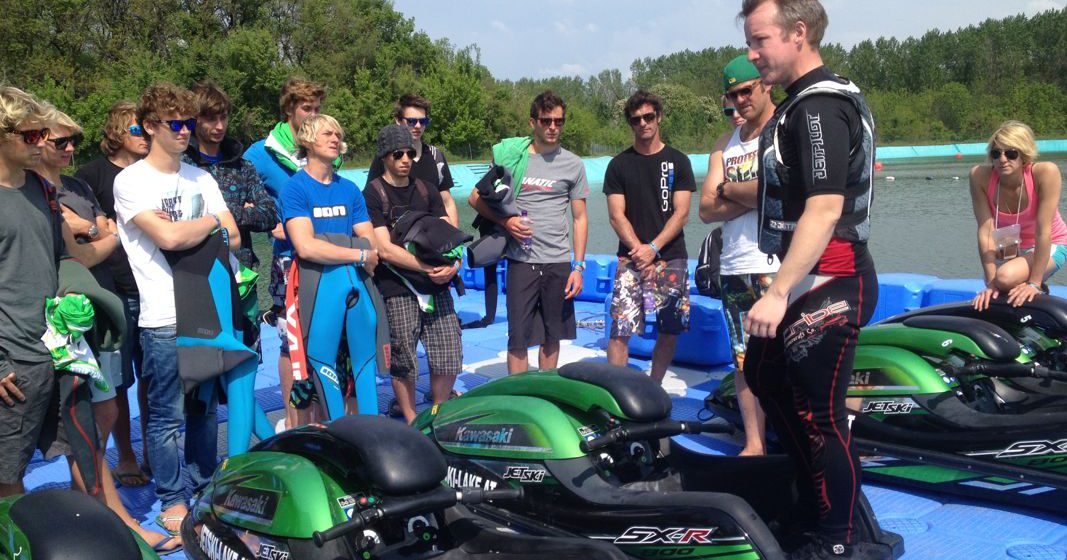 EFPT at the Surf Worlcup – Day 4

A day off, some fun action and a false alarm at the Surf Worldcup here in Podersdorf.

At todays skippers meeting in the morning the decision was made to temporarily cancel the competition due to the light north wind which was forecasted to drop even more during the day. To keep the riders busy though the organisation managed to set up a spontaneous trip to the Jetlake in the Speedworld, located about 25 minutes from Podersdorf in Bruck an der Leitha. Former female world-champion in jetski racing Katharina Lach offered to open the lake especially for the riders. When the fleet heard about the chance to test professional freestyle jetskis it didn’t take much time to get everyone ready to leave. Riders at the briefing

Another short clip produced by Boardseekermag :

After getting a very warm welcome at the Jetlake and a short briefing by the staff all the EFPT sailors could have a go. Whilst the riders tried racing each other it became quite obvious that it was not as easy as it looked at the start when Katharina Lach fired her jetski at full speed around the buoy-course. Everybody seemed to have great fun though and just when the sailors proceeded to try out the brand new fly-board, big dark rain clouds started to cover the sky. A few calls later everybody was back in the cars heading to Podersdorf as there seemed to be a chance of wind. All the riders were called to the beach immediately as the conditions seemed to improve. The storm warnings around the whole lake started to come on and some riders hit the water to give it a go. Yet just when we were about the start the black clouds were gone and with them also the wind, which didn’t only leave the riders but also the whole crew disappointed. With forecasted north-west wind for tomorrow morning we’ll have an early skippers meeting at 6.00 am to make sure that there is a chance to run the single elimination.

For tonight there will be a community dinner for all riders at a local restaurant and obviously an early night.

We hope to have good news tomorrow and will report with live updates via our social media channels as usual.