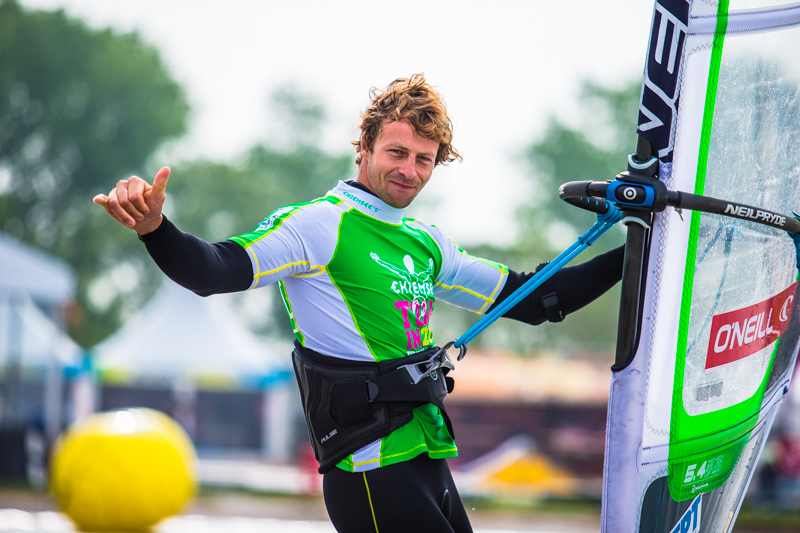 EFPT at the Surf Worldcup – Day 5

The skippers meeting for today has been set for 6.00 am in the morning as the conditions were forecasted best early in the day. With rather light north-north-west wind the sailors reached for their big sails from 4.8 to 5.6 and the bigger boards, many wishing they had bigger equipment.

The first heat was on the water at 6.30 am with Philip Soltysiak (Starboard) sailing against Romain Pinocheau (F2) from France and Mattia Fabrizi (North/Fanatic) from Italy against Yegor Propretinskiy (North/Fanatic) from Russia. Since all four sailors are riding on a very high level it became obvious how challenging the conditions were, still the score sheets were filled with moves and so the competition was continued. Due to the gusty wind the heat duration was afterwards extended to 10 minutes though to give the riders some more time in case the wind was too much of an up and down. The riders had to work hard in their heats, just like 19 year old Yentel Caers (North/Fanatic) from Belgium who was pumping his heart out on his 4.8 North Idol, literally lifting his Fanatic Skate 101lt out of the water. His effort paid off though and he could take out Julien Mas (Patrik Diethelm) from France and even the experienced Max Rowe (North/Fanatic) from England, who seemed unhappy about his equipment choice.

Highly impressive performances were shown by Amado Vrieswijk (Starboard) from Bonaire, as well as Rick Jendrusch (F2) and current EFPT champion Steven Van Broeckhoven (JP/Neilpryde) whose skills don’t seem to to vary with different conditions. The former world-champion landed culos, konos, shakas, ponches and even some smooth double moves. Jacopo Testa who used the winter months to train a lot, made most of his maneuvers stick and defeated Yakovlev (JP/Neilpryde), Van der Eyken (Starboard) and Phil Sotlysiak (Starboard) on his way to the semi-final. Whilst young Amado Vrieswijk (Starboard) from Bonaire sailed confidently through all of his heats and could only get stopped by former European Freestyle Champion Davy Scheffers (Tabou/Gaastra) from Holland, the other Bonairean Tonky Frans (Tabou/Gaastra) managed to go to the semi-final sailing slightly underpowered on his 5.0 Gaastra Pure.

After the wind dropped here at lake Neusiedl and we were about to give up all our hopes to finish the single, the waiting period of about six hours paid off and the wind kicked in again, delivering awesome conditions for the semi-final and the finals.

In the semi-final Steven Van Broeckhoven was facing Davy Scheffers and Tonky Frans was competing against Jacopo Testa. The judges saw a firework of moves on the water with Steven being well impressive landing a huge reservoir of power-moves. In the end Tonky and Steven went through to the winners final which was started straight afterwards to guarantee a result for the first and second place. In the winners final the wind stayed strong for the first half of the heat but seemed to decrease more and more as it proceeded. The judges could mark down a high number of maneuvers but the decision favored Van Broeckhoven in the end, showing shove-it spocks, a spock-culo and a barracuda which is very rarely seen in competition.

Just when the horn for the losers final between Testa and Scheffers started the wind was gone. Playing tricks on us the whole day though it came back just after the cancellation of this last heat of the single elimination. The two riders looked well powered up on their 5.2s most of the time and were fighting hard for the last position on the podium. The Italian rider seemed to have a great day landing most of his moves with a lot of style and could therefor prevail over Scheffers.

The top three of todays single elimination are:

Winners of the single (by Martin Reiter) The skippers meeting for tomorrow is set for 9.30 am when we hope to start the double elimination.