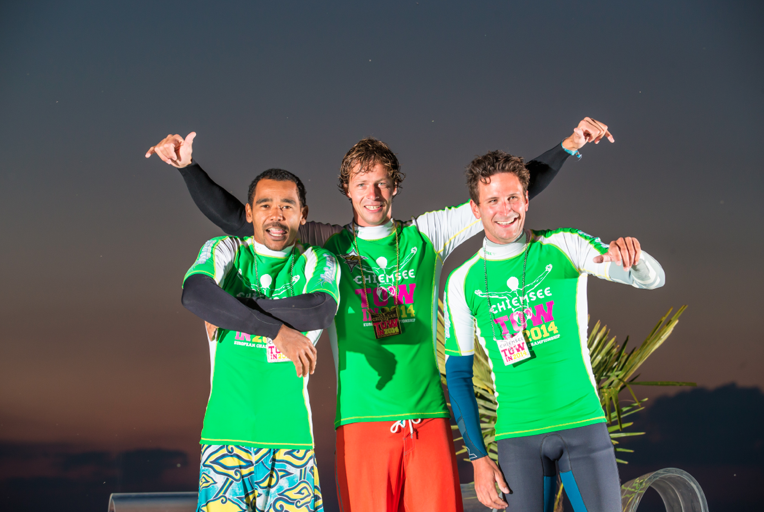 EFPT at the Surf Worldcup – Day 6

Amazing weather, no chance to start the double and an incredible final of the Chiemsee European Tow-in Championship.

Day 6 here in Austria was tow-in day. With the windsurfing competition being called off at 2.00 pm in the afternoon as the conditions didn’t seem to improve at all, the riders used the time to chill after the very long day on Tuesday and the top ten of the tow-in qualification rounds could fully focus on their upcoming challenge – the big Chiemsee European Tow-In Championship final at sunset.

In the training rounds which started one hour before the actual competition the high level of the fleet became already obvious. Steven Van Broeckhoven (JP/Neilpryde) who won the European tow-in title two times in a row, would have to defend his position against top French rider Adrien Bosson (North/Fanatic), freestyle champ from Bonaire Tonky Frans (Tabou/Gaastra) and the likes of Adam Sims (Sailloft/Patrik), Julien Mas (Patrik), Mattia Fabrizi (North/Fanatic), Youp Schmit (JP), Amado Vrieswijk (Starboard) and Vladimir Yakovlev (JP/Neilpryde) who performed his way into the final with a no-handed burner. However, every sailor had chances to go to the podium and the challenge was on!

Before the tow-in started there Continentseven announced the top three of the ‘Best Trick Competition’. With a combination of a public voting on the C7 homepage, the ranking of the moves done by the EFPT judges and the selection by the C7 crew, the result favored Steven Van Broeckhoven with a spock-culo in front of Dieter Van der Eyken (Starboard) with an air-funnel and Tonky Frans with a huge culo.

After the presentation of the top 3 who shared a total of 1.000€ prize-money between them, we went straight into the tow-in competition. The format for the final was changed from two to three runs for each rider with the best one counting in order to guarantee not only more action but also to push the sport and motivate the riders to risk more and try out new things.

First round saw a lot of ‘safer’ moves like funnels and double funnels, with some noteworthy performances by Adrien Bosson and Steven Van Broeckhoven who showed burner-funnel combinations and Adam Sims who went for a Spock, clearly wanting to double it up. In the end the speed was missing but this unusual move got rewarded with quite a high score of 37 points. The highest score in the first round was by Adrien Bosson who reached 40 points.

In the second round the riders tried to double, even triple up their moves or to go for highly technical maneuvers which are very hard to land like culos (Fabrizi, Schmit, Vrieswijk) and air-bobs (Mas). An outstanding performance could be marked down from European Champion Steven Van Broeckhoven who did a massive air-funell into burner, where the second pop was unbelievably high. He landed upright on his board and claimed his move with a huge smile in his face, knowing what was about to come. The judges honored this trick with a remarkable score of 50 points – the highest of this competition. The rider from Belgium and the rest of the fleet kind of knew that this would be very hard to beat. Therefor the sailors went crazy in the third round trying new things and going even faster into their moves. The statistics of landed maneuvers decreased a bit but the spectators on the beach still loved the crash parts and the air time in front of the most amazing sunset over the lake. Just as predicted by many insiders Steven Van Broeckhoven could take victory over Tonky Frans (2nd place) and Adrien Bosson (3rd place) and therefor defended his title for the second time! When he was asked on stage by speaker Roberto Hofmann about how it feels to win all the contests of one competition (freestyle/tow-in/best trick) Van Broeckhoven stated: ‘I came here mainly for the freestyle competition and it was my main aim to win it, but winning all of the different contests is super sick for sure! I am really really happy!’

The full result was as follows: