On day two of the Vanora Engadinwind by Dakine, the second qualification round had been on the schedule to determine the final top six riders that would advance to the big final on Saturday.

The day started off with glassy, crystal clear water and fleet number two. In yesterdays first qualification round we have seen a lot of air funnel and burner combinations – moves that most riders feel comfortable with in this dicipline. Today the competitors started to mix it up a little, which was great to see.

Adrien Bosson (Duotone/Fanatic) started off by getting towed-in clew first to go for a clew first flaka, a move that his fellow countryman Nicolas Akgazciyan (Neilpryde/JP) likes to perform in tow-in events. Unfortunately the French sailor couldn’t get the landing and despite landing some decent tricks in his runs, his highscores from yesterday remained. With a total of 12,69 points he secured a place in the final. 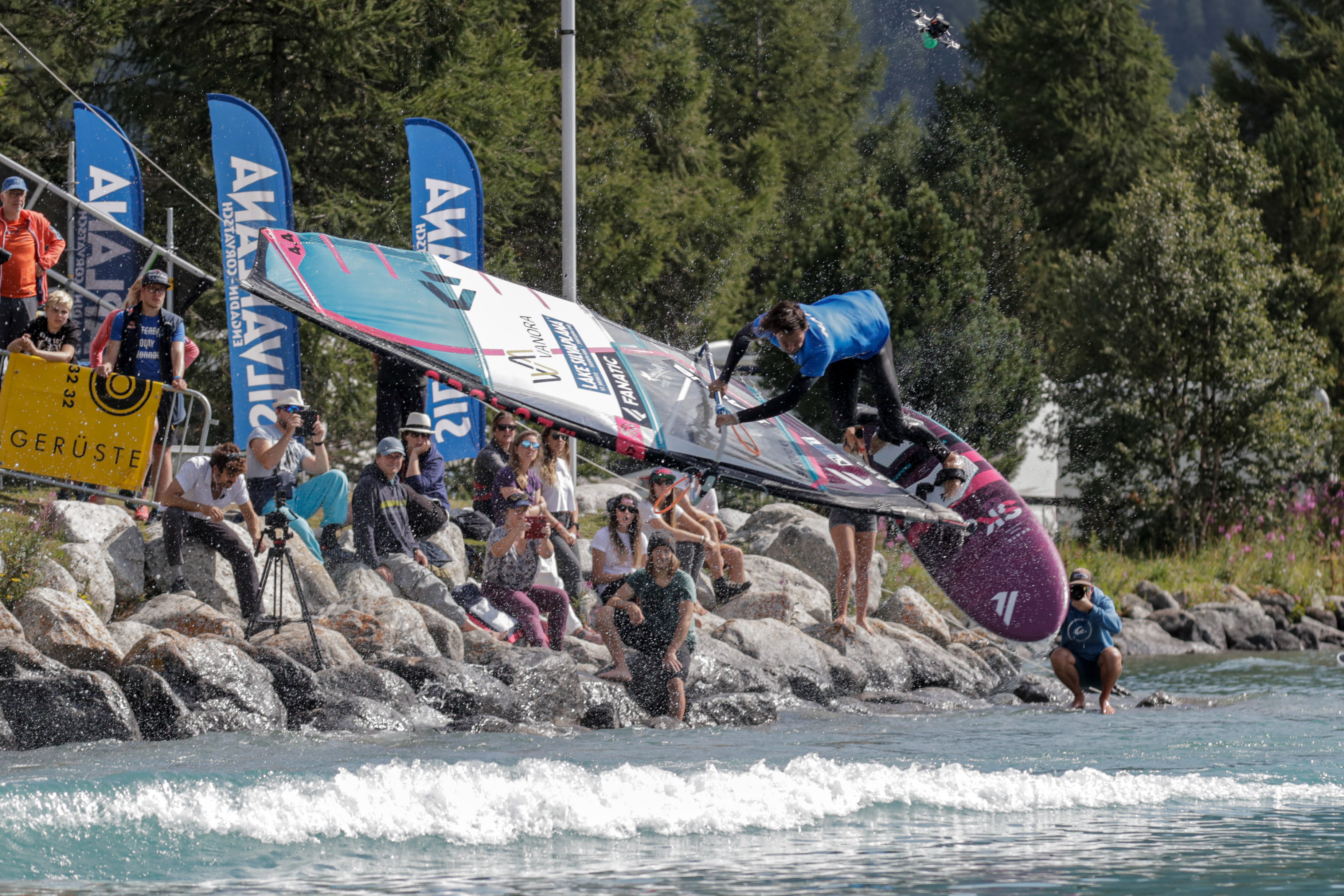 Yentel Caers seemed pretty confident after his performance yesterday (13,63 points) and went for regular stance moves today. The Belgian sailor attempted a double air-culo and could almost make the landing. We are excited to see him perform this maneuvre also in the final and hope for the first ever double air culo landed in an official tow-in competition.

Gunsails/Starboard teamrider Steven Van Broeckhoven timed his runs perfectly, aiming for an air funnel in the flat water into burner over the wake of the powerboat. He earned 7,00 points for this move. Summed up with his highest score from yesterday, he will also be one of the finalists with an overall of 14,19 points. 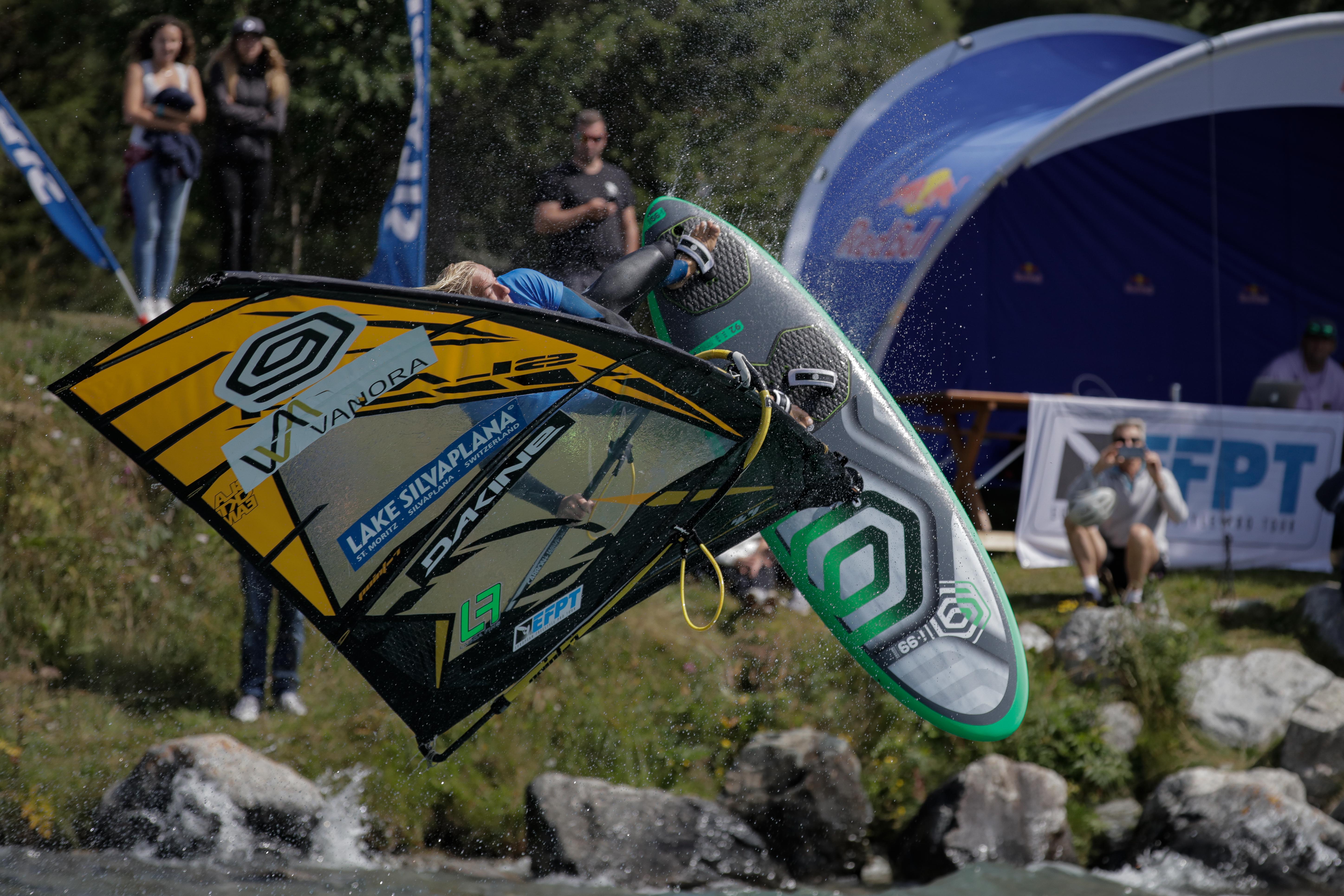 One of the most inventive and radical freestylers worldwide, Balz Müller, attempted a shove-it air spock in his first run, but literally got ejected after the rail got caught in the water. Despite his efforts for double air rotations, he couldn’t beat his own highscore from yesterday. Nevertheless, Balz marched into the final with 16,31 points as the leader.

Jeremy Plüss, who couldn’t make it on time for the first round yesterday, had to go all in at the qualification round today to make sure that two of his three runs would be counting high enough to advance to the final. It was quite a thriller to watch the Swiss sailor crash most of his warm-up runs to then land a solid air burner 360 and air funnell 540 into 360 to count. With 12,63 points in total, he sealed the deal for a fixed place amongst the top six.

Youngest finalist is Lennart Neubauer (Starboard) from Greece, who is also leading the U16 EFPT freestyle ranking. Neubauer has been on tour for several years already, earning his name as one of the most talented newcomers. Even in the tow-in Lennart could dispatch of two more routined sailors and completes the final fleet of six with 10,56 points. 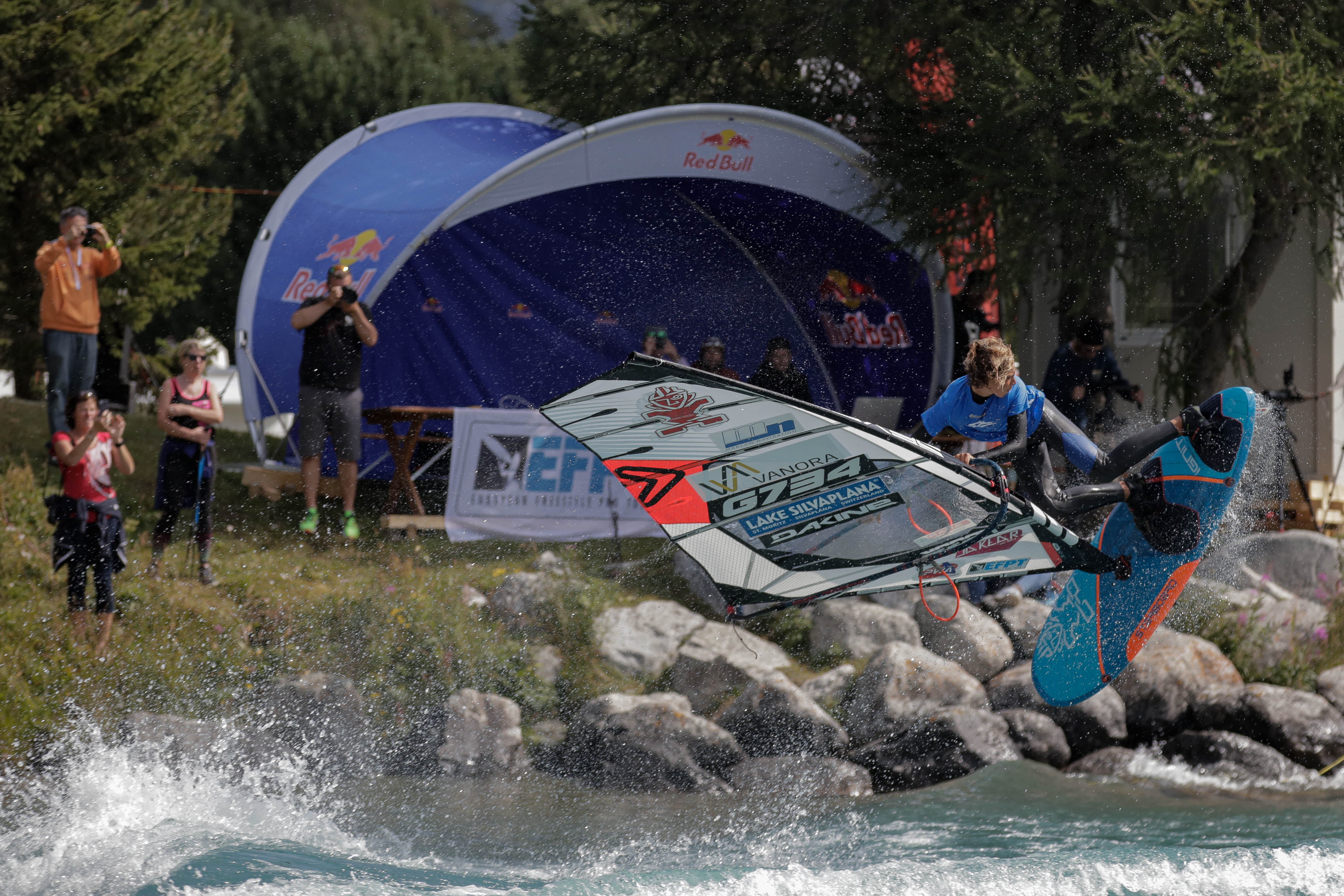 With the Maloja wind increasing around lunchtime, the tow-in competitors have been released to make way for the IFCA foil world championship races and the foil freestyle clique around Balz Müller, that put on quite a show in the 30 minute supersession.

The final will be on tomorrow and will be livestreamed by Adam Sims and his media crew with live commentary by Ben Proffit.