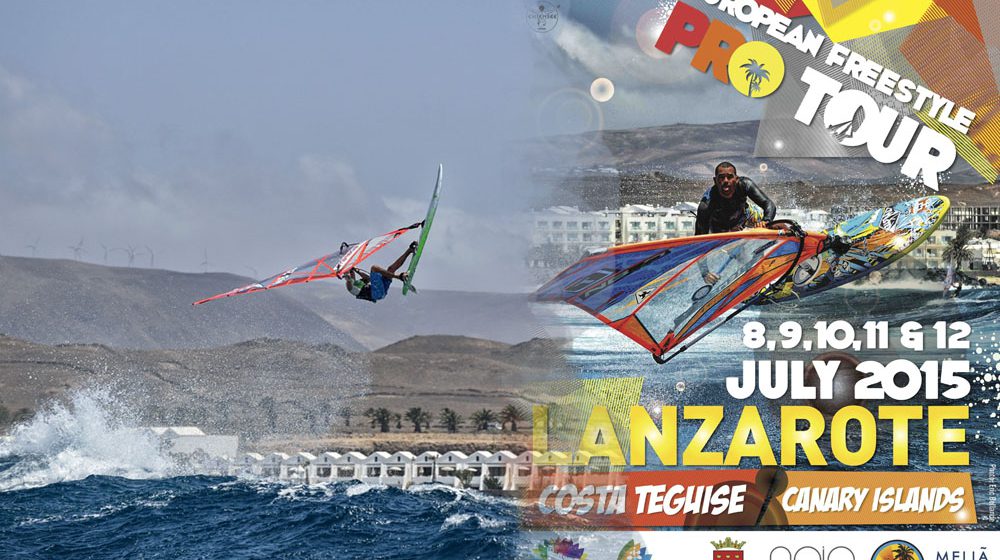 In 2014 the European Freestyle Pro Tour was staged at Costa Teguise, Lanzarote for the first time. A spot that is famous amongst windsurfers and a place that former European Freestyle Champion and PWA competitor Antxon Otaegui and top level freestyler Tonky Frans call home.

Already in the first year Antxon Otaegui and the crew of the Pro Center Lanzarote impressed with flawless organisation. To everybodies disappointment the conditions during the four day competition period were marginal and made a fair contest impossible. Fortuntly a tow-in competition made up for the lack of wind and delighted hundreds of specators at the event site.

From the 8th-12th of July we begin round two of the EFPT in Lanzarote and hope for the conditions that the island is famous for. Since Steven Van Broeckhoven (JP/Neilpryde) and Rick Jendrusch (F2/Severne) are injured and will not be able to attend the event, the cards will be reshuffled. Not only Frenchie, Adrien Bosson (North/Fanatic) but also Amado Vrieswijk (JP/Severne) are keen to fight for the title this year.

Bosson who is also training a lot in wavy conditions is crossing his fingers for Costa Teguise to deliver and stated: “I saw that the spot in Lanzarote can be really wavy with strong winds. So I really hope for that kind of conditions because I love to jump and this would be perfect for me!” Despite being one of the contenders for the top positions he stays humble and mentioned that for him it will be the most important thing to sail well during his heats and to have fun, just like at his last EFPT event in Greece.

Also Hugo de Sousa (RRD/RRD) who convinced with his incredible style and consistency at the EFPT event in Milos Beach, Greece, earlier this year could be winner of the tour, although he wouldn’t be able to walk home with the European Freestyle Pro Tour title due to his Brazilian nationality. Steven Van Broeckhoven at the event in 2014

European Champion of 2012 Davy Scheffers from the Netherlands will also enter the event and fight against other top level riders like Yentel Caers (JP/Neilpryde), Phil Soltysiak (Starboard) from Canada, Adrian Beholz (Sailloft/Patrik) from Germany and Antony Ruenes from France just to name a few of the top level sailors amongst many European Freestyle Pro Tour rookies who we are more than happy to welcome to the EFPT family. The whole pre-registration list can be found here.

The forecast for the event is looking good and we keep our fingers crossed for it to stay that way. We’ll report for you on a daily basis from the event-site. For more live and ‘inside-the-EFPT’ updates please make sure to follow us on our social media channels: Instagram, Facebook and Twitter.

Kuma Movie just recently released a flashback of some of the best action of organiser Antxon Otaegui at his homespot and the event-site: Costa Teguise.