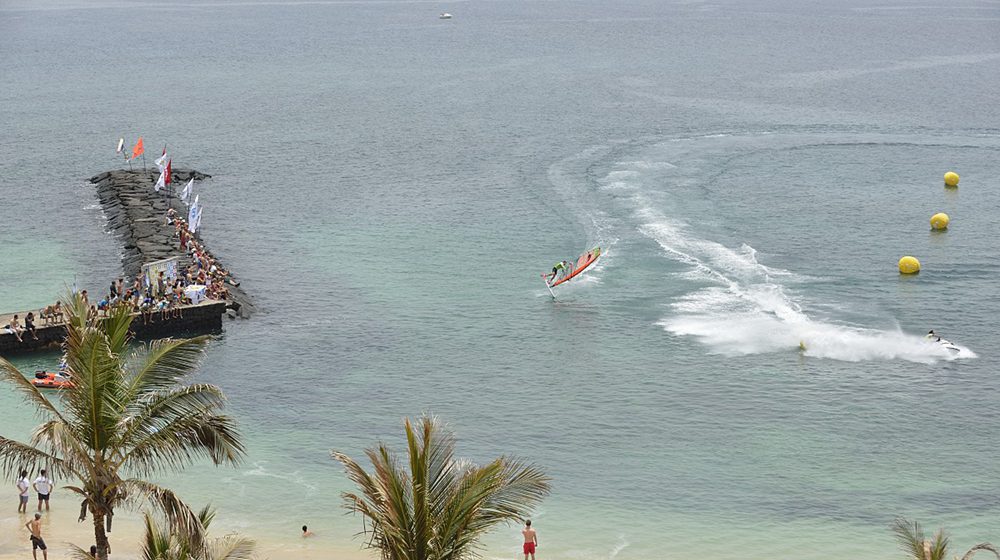 On the third day of the EFPT Lanzarote there has been light winds around the event-site throughout the whole day and therefor was committed a 100% to tow-in windsurfing, proving that nowind doesn’t have to be a problem.

20 out of 23 competitors signed up for the two fleets. Really good to see was the high participation rate of sailors who usually are not into tow-in windsurfing and even riders who never did it before. Flo Wegerer from Bonaire and Hugo de Sousa (RRD/RRD) from Brasil had their first try-outs in this discipline in the last two days, yet it didn’t stop them to enter the competition and fight for a place in the final with 2.000 Euros prize-money up for grabs. Fleet number one included some tow-in specialists like Tonky Frans (Tabou/Gaastra), Mattia Fabrizi (North/Fanatic), Dieter Van der Eyken (Starboard) and Adam Sims (Sailloft/Patrik) as well as EFPT rookie Noah Vocker (North/Fanatic), Hugo de Sousa, Davy Scheffers (Tabou/Gaastra), Antoine Albert (Tabou/Gaastra), Adam Gavriel (Sailloft/Patrik) and Rafael de Windt (F2). The riders had three runs each with the best one counting, whilst the judging was based on style and technical difficulty with 10 maximum points each. The riders put on an amazing show for the crowd that gathered on the beach, clearly attracted by the scenery. After three runs Adam Sims from the UK could take victory with an air-funnell into a huge second air-funnell, over Hugo de Sousa (burner 900) and Dieter Van der Eyken (funnell into funnell). Fourth and fifth place were taken by Tonky Frans and Mattia Fabrizi respectively. A highly impressive performance was shown by Hugo de Sousa how seemed to improve run by run and landed a very stylish burner 900 in the end.

After a small lunch break we went straight into fleet number two with the likes of Steven Van Broeckhoven (JP/Neilpryde), Amado Vrieswijk (Starboard), Nico Akgazciyan, Yentel Caers (North/Fanatic), Rick Jendrusch (F2), Valentin Böckler (Starboard), Jeremy Plüss (Tabou/Gaastra), Loick Spicher, Nic Hibdige (Tabou/Gaastra) and Florian Wegerer. The first two places went very much as expected to Steven Van Broeckhoven (1st) and Amado Vrieswijk (2nd). Steven scored 53,5 points with an tweaked air-funnell into burner in his second run whilst Amado reached 50,5 points with an incredibly stylish and fast burner 900. Those were the also the highest scores of today. Yentel Caers from Belgium managed to pull third place with a funnell into air-funnell. Nicolas Akgazciyan from France ended up in 4th place and Rick Jendrusch could just manage to beat Valentin Böckler with a double funnell to complete the fleet of ten for the final tomorrow. Starting order for tomorrow from worst to best result