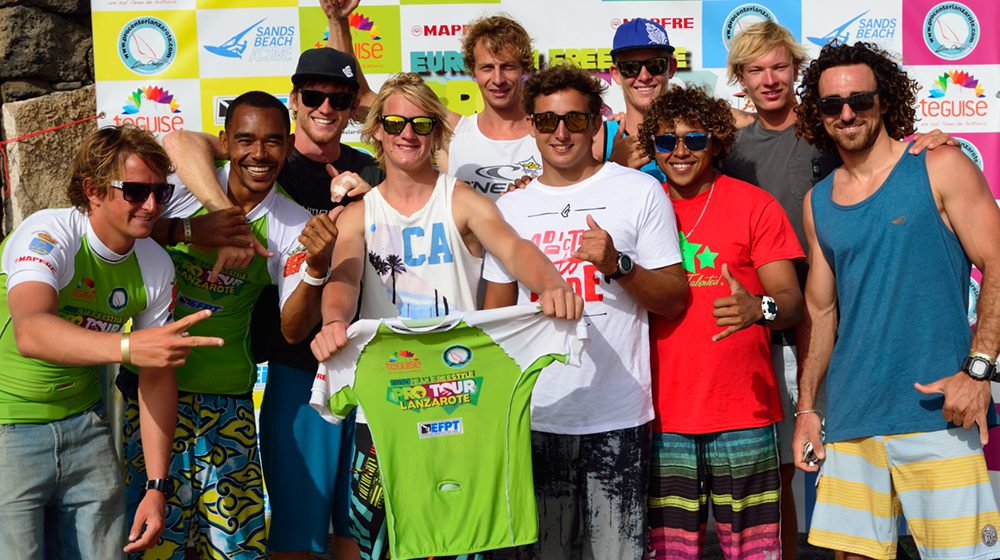 At day 4 of the EFPT Lanzarote the chance of running the freestyle event seemed to be higher than at all the other days of competition despite the very low forecast of only eight knots. Around lunchtime the wind seemed to increase leaving crew, riders and organization with the hopes of being able to run at least the first eight heats of the single elimination to get a result. The scheduled tow-in final at 1.00 pm was therefor on standby. So was the freestyle after a while as the wind changed direction every minute and went from side-, to off-, to on-shore which left some riders swimming back to the beach. Since the sailors could pump themselves into some moves, the first heat seeing Mattia Fabrizi (North/Fanatic) against Aron Etmon (Starboard) and Valentin Böckler (Starboard) against Jeremy Plüss (Tabou/Gaastra) got started, yet had to be cancelled in the end as the conditions weren’t sufficient. Tonky Frans in the light wind conditions this morning

The battle was on for a total of 2.000€ prize-money which organizer Antxon Otaegui put into the pot. With very tricky and changing light wind conditions the tow-in seemed to get very challenging but also led to big moves that are usually not seen in this discipline just as a massive, technically perfectly executed and stylish skopu by Tonky Frans who scored the maximum points for style on some of the judging sheets. With a high score of 50 points he set the benchmark very high for all the other riders. Outstanding was also Van Broeckhovens air-funnell into burner into the event photographer Eric Bellande, who was shooting from the water. Luckily he wore his helmet and had the camera in a watercase. What could have ended worse just led to a hole in Steven’s board and a few scratches in Eric’s face.

Yentel Caers from Belgium scored highest in the first round with a perfect air-funnell into air-funnell which made the young North/Fanatic teamrider super happy and motivated him to try go for bigger moves in the other rounds. Amado Vrieswijk went for a double culo, which his hardly seen in tow-in and he almost pulled it. He later explained that he had a spin-out just before he lifted the board out of the water for his first rotation and seemed rather disappointed about his performance. Dieter Van der Eyken popped through a double air-funnell just as Adam Sims from the UK. Honored by the crowd were mainly landed maneuvers but also big crashes like the one from Hugo de Sousa who had a spin-out in the last bit of the tow which made him hit the water at full speed. It looked like he tore a muscle in his neck, yet he went out straight again and wanted to have another go. The audience loved the motivated young Brasilian and he earned a big applause for his show.

The results were afterwards announced for the press and sponsors that gathered together at the beach to get their cameras as close to the pros as possible.

Organizer Antxon Otaegui stated: ‘I have never seen that many people watching an event here at Costa Teguise! It was an amazing show! I am really happy, even if I am disappointed that we didn’t have wind. Let’s hope for better conditions next year.’ Results of the tow-in final