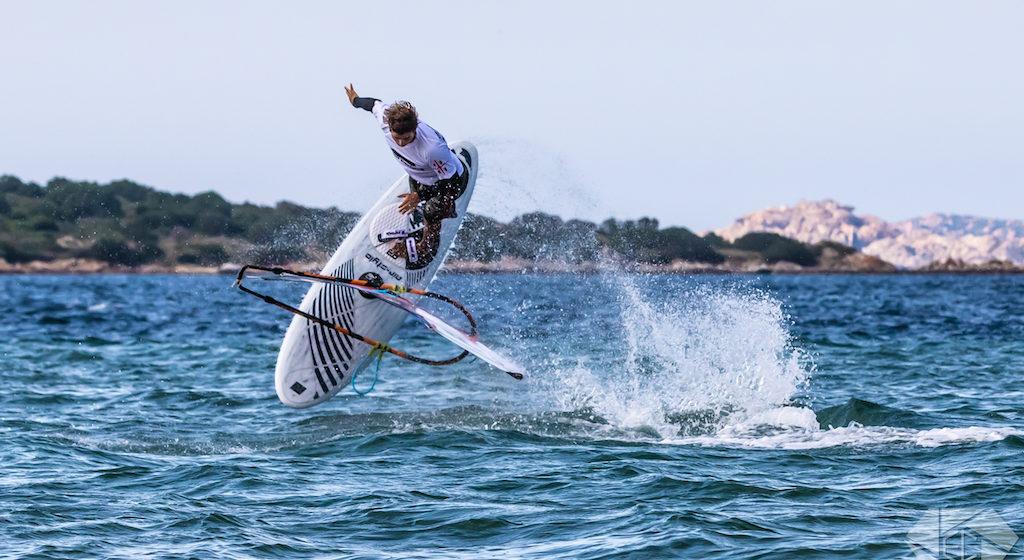 At the penultimate day of the EFPT in Sardinia, the wind teased competitors and crew. Even though everybody has been exceptionally patient every day, waiting from 9.00 am in the morning until 8.00 pm in the evening, that the conditions would make a fair contest possible, the riders became a bit restless. After some fun challenges, like a rigging competition between Riccardo Marca (North/Fanatic) and fellow countryman Francesco Cappuzzo (RRD/RRD) and a huge beach clean up, the sailors were eager to get onto the water. The light westerly wind provided great conditions for some freeriding and foiling and a perfect arena for a tow-in show.

One of the EFPT judges took control of the powerboat and towed the riders into some amazing tricks. Mattia Fabrizi (Patrik), who is leading the tow-in ranking after his first place in Austria, landed a perfect no-handed burner. Francesco Cappuzzo stomped a double culo and a culo spock and seemed super stoked about it. Rossel Bertoldo (RRD/RRD) went for burner variations and wanted the skopu, but couldn’t rotate all the way through. Giovanni Passani aimed for funnell burners, but couldn’t get enough speed to make it through the second rotation, due to the boat that wouldn’t create as much speed as the jetski. Dudu Levi (Gunsails/Fanatic), who entered his first international competition here in Sardinia, also had his debut it the tow-in discipline. After some troubles in the small troubles in the beginning he managed to pull a clean burner.

At 7.00 pm we called it a day. The forecast for tomorrow looks promising for one of the spot alternatives – Marina Maria. In case the wind will not kick in here until 10.00 am, the riders were informed by race director Tom Hartmann that the competition site might be moved. Gabriele Varruccio, a local rider stated:’With this forecast of 12 – 15 knots tomorrow and sunshine, there will be a good chance to sail on 4.8 or 5.2!’

For now we are staying positive and wait for the last (and hopefully windy) day here at Sardinia.