Day two had been started early with really high expectations. The north-westerly wind had been forecasted from the morning onwards, so the riders and crew were called to the even-site at 6.30 am by race director Danny Kater.

The race course had been set and ready for a start at 09.00 am. With beautiful weather hopes were high that the wind would fill in early and stay throughout most of the day. And this is were we could see the beauty and the curse of this sport – you can be as prepared and ready as you want, if the weather doesn’t play ball, there is nothing you can do about it.

A long waiting game commenced and the wind had been teasing us the whole day with suitable gusts that looked ok for the bigger gear, but big holes in between. Race director Danny Kater decided to push the contest further once the gusts seemed to come in a little more frequent. First heat on the water was heat 5A/B with Youp Schmit against Bob Cook and Eugenio Marconi against Tigo Kort (JP/Neilpryde). This heat also seemed to be the cursed one of the day, since even though the riders were pumping themselves into some moves, the heat had to be cancelled over and over again because conditions just didn’t seem right for a fair competition. All the riders showed some great nerves, re-starting their heat seven times in total.

A lot of waiting on day 2 (pic by Alex Lang)

It had been nerve wrecking for the riders as well as the crew, because obviously everybody was more than keen to have a proper competition up and running. We could however finish heat number 6B / 8B with Felix Volkhardt (Severne) against Tim Gerdes and Marco Vinante from Italy (Point-7 / JP) against Austrian windsurfer Paul Simmerl. The amount of moves had already been reduced to two moves counting per tack, to make a result possible. Vinante then advanced over Simmerl and Felix Volkhardt could take out Tim Gerdes, who competed in the pro fleet for the first time. Also heat number 7A / 7B could be finished, where Sam Esteve (JP/Neilpryde) beat young Croatian sailor Tin Greguric (Severne) and former World Champion Dieter Van der Eyken (Severne) once again showed that he’s still got it by defeating German freestlyer Constantin Geis (Severne). 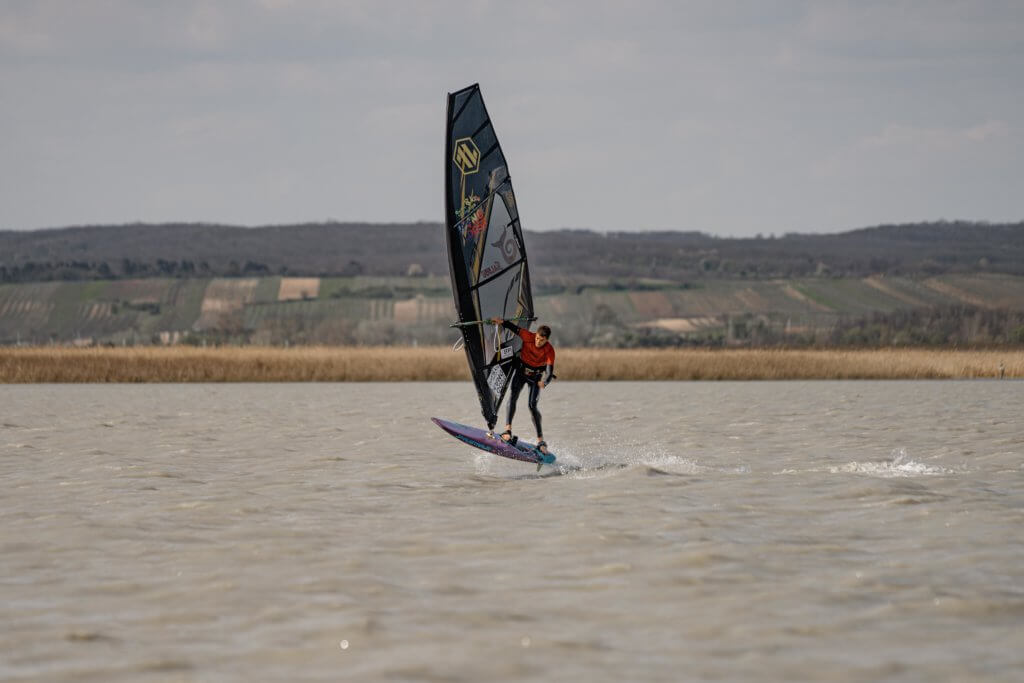 After re-starting and cancelling heat 5A / 5B for the seventh time today and with the wind getting less and less, the AP flag went up around 5.00 pm and the day was eventually called off at 5.30 pm. Youp Schmit showed some amazing motivation today and definitely deserves a mention here. His heat seemed to be slightly doomed, but Youp put all his energy into each one of his runs and remained positive even though the decisions had been tough and sometimes unpopular.

The forecast for tomorrow says beautiful weather but unfortunately no wind, so the tow-in qualifying fleet number two will be on the water at 02.00 pm and the big final will be staged at 07.00pm, once the five remaining finalists will have been determined. Please make sure to follow our social media channels and live page with livestream for more updates and some peaks behind the scenes!