The penultimate day at the Surf Opening in Austria has been ‚tow-in day‘. With beautiful weather the five remaining finalists had been determined and the final had been staged right on time with one of the breath taking sunsets, that lake Neusiedl is known for.

At 3.00 pm local time, tow-in fleet number two was on and the fleet was strong: Amado Vrieswijk (FutureFly/Severne), Yentel Caers (JP/NeilPryde), Sam Esteve (JP/NeilPryde), Adrien Bosson (Duotone/Fanatic/MauiUltrafins), Jacopo Testa (AV/Point-7), and Youp Schmit were joined by young talents Tim Gerdes, Tigo Kort (JP/NeilPryde), Maurizio Moritz (Duotone/Fanatic) and Bob Cooke (JP). The riders had two runs each with the better one counting. The water was glassy and the jetski pulled the competitors into their moves, that they launched off the wake of another power-boat – a format that is very popular in this discipline and is used at most of the tour-stops.

It was amazing to see the rookies Maurizio Moritz and Bob Cooke entering their first ever international freestyle and tow-in competition. In tow-in especially, the progress is visible run after run. Cooke is an UK competitor who entered last minute to gain competition experience here in Austria and attempted his first tow-in burners to almost landing it in his second run. Tim Gerdes and Tigo Kort, both shaped in the talent factory of Brouwersdam, went for big air funnells but couldn’t quite get the landing right. They seemed to head fearlessly into their moves, which was impressive to watch.

Jacopo Testa, who we usually don’t see participating in the tow-in discipline, surprised with a very clean culo (5,53) today which secured him a place in the final. Amado Vrieswijk landed a smooth and slightly stalled air funnell into burner, which scored him 8 points, but it was the double air culo he tried in the second round that was really impressive. Unfortunately he couldn’t make the landing, however his place in the final was already secured. Yentel Caers landed a double air funnell in his first run (8,28) and as the showmaster he is, went for his signature move: the human canonball – a crowdpleaser at that. Adrien Bosson also made it to the final five by landing an air burner 360 (6,44). 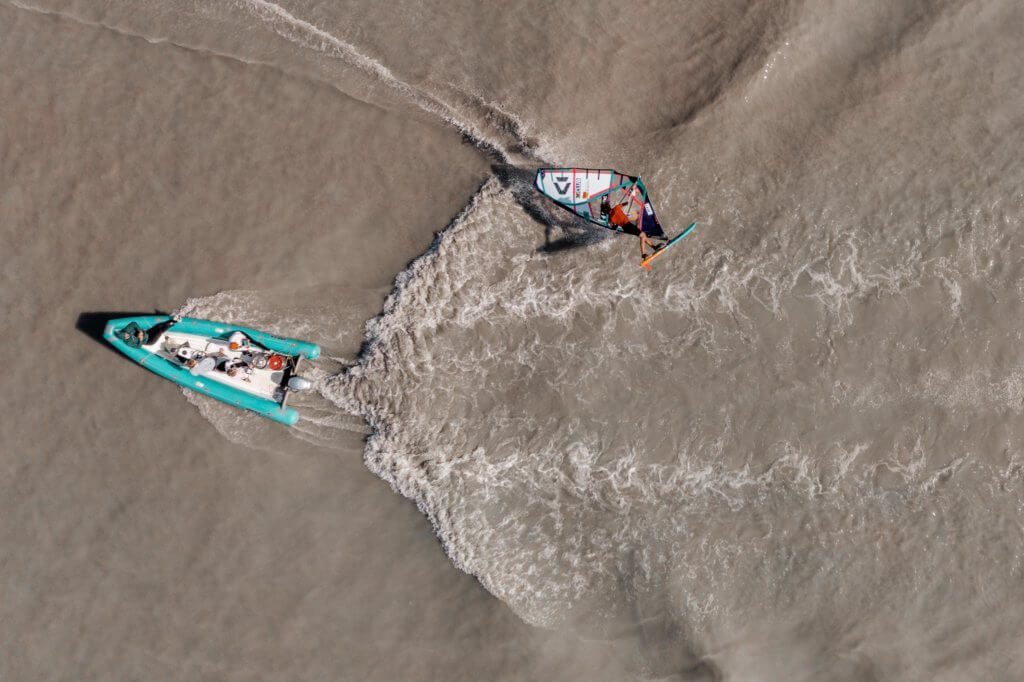 Adrien Bosson qualifies for the final (by Alex Lang)

The move of the day and also the highest score of the competition (even after the final was held), has been laid down by no other than winner of the tow-in in Austria 2017: Sam Esteve. The Frenchie circled through a double air burner which scored him 9,25 out of 10 possible points.

The moments before the final started with a bit of a set-back, when Dieter Van der Eyken (Severne) got injured during training. He slipped out of the straps and hit his knee on his gear. He couldn’t put much pressure on his leg and therefor pulled out of the tow-in competition. We wish Dieter a speedy recovery.

In the tow-in final the riders had three runs each, with the best one counting. It was hard to say who would be the contenders for the podium, because the fleet was THAT good.

Sam Esteve and Yentel Caers were definitely two riders to watch out for, but surprisingly both of them couldn’t perform on their highest level. Whilst most of the riders circled through burner and funnell combinations, it had once again been another move that did the trick, but first things first. 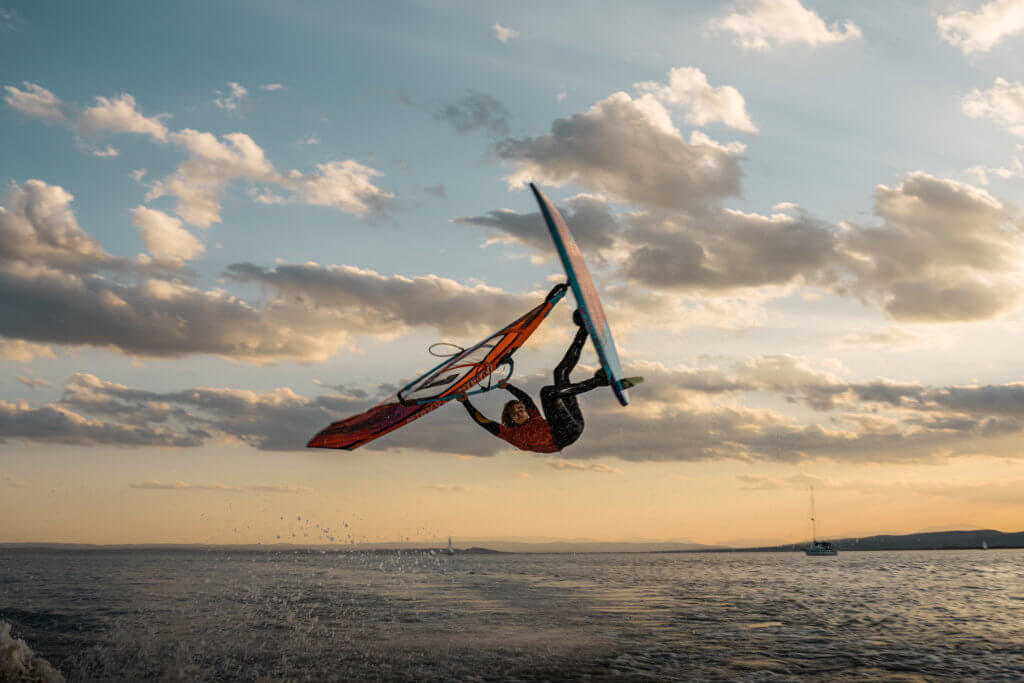 Taty Frans (Point-7/Futurefly) had been in a great mood today, spreading nothing but good vibes and also stepped up his tow-in game. In his second run he landed an air burner 360 and scores 7,03 points. Adrien Bosson scored the exact same points with the same trick. Amado Vrieswijk missed the place on the podium, however deserves some credit here for attempting two double air culos in this tow-in final. Jacopo Testas highest score was given for a nice airbob (6,53) in his last run and the Italian ended up in 6th place. Coming in 7th had been Yentel Caers with an air funnell 360 (5,91). Valentin Böckler (Gunsails/MauiUltrafins), who is not only competing in this event but is also working for the livestream team, unfortunately couldn’t properly land his moves and eventually ended up in 8th position.

Kiri Thode was competing in tow-in for the last time about ten years ago, however managed to stick a beautiful skopu today (7.50). Lennart Neubauer (Starboard/Severne/Maui Ultrafins) from Greece crashed his first run, went into the lead in round two and then managed to pull the highest score of the tow-in final with an air skopu diablo (7,97 points). 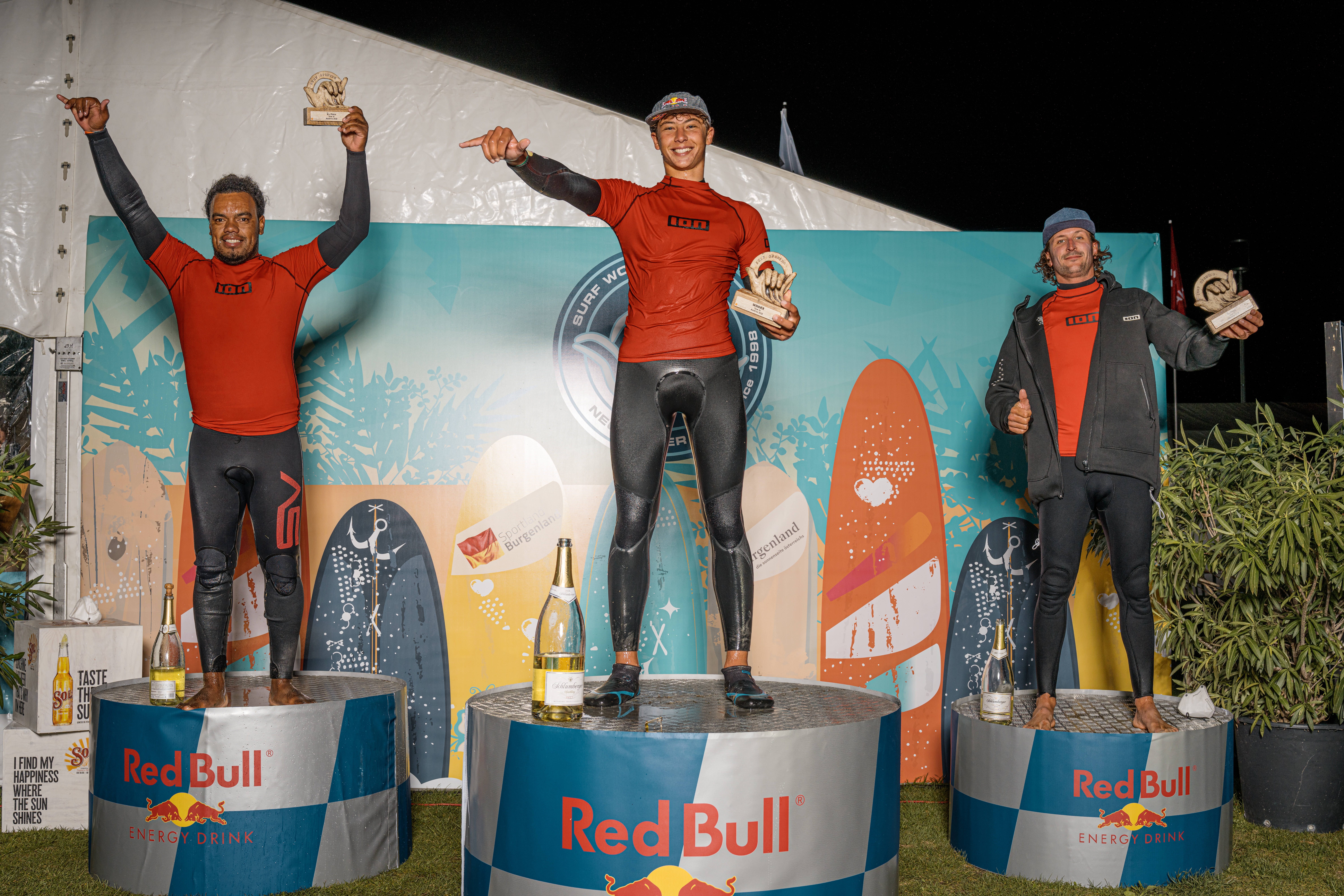 The top three of the tow-in competition (by Alex Lang)

Since a tie on the third place isn’t possible, the second highest score had been used to determine the leader between Taty Frans and Adrien Bosson. Bosson scored a 6,13 for an air funnell burner and therefor beat Frans second highest score of 5.00. Second place went to Bonairean sailor and former world champion Kiri Thode. Claiming victory here at the tow-in competition has been 17 years old Lennart Neubauer from Greece! We love to see the evolvement of this upcoming champion and are looking forwards to where he will take it!