On day two of the Vanora Engadinwind by Dakine, both qualification fleets had been on the schedule again to determine the final top six riders that would advance to the big final on Saturday.

Each rider had another two attempts to improve their ranking from the previous day. The maloja wind came early today, which made different moves possible compared to yesterday when the fleets were sent out on perfectly glassy water with basically zero wind.

First round on the water has been fleet 2 today, with Lennart Neubauer, Amado Vrieswijk (JP) and Steven Van Broeckhoven (Gunsails) in the lead. Niclas Nebelung (Duotone/Fanatic), Aron Etmon and Riccardo Marca (Duotone/Fanatic) were eager to improve their scores which would potentially allow them to compete in the final tomorrow. Even though Nebelung could land a nice burner 360 (6.44 points) it was not enough to push into the top three of fleet 2. Also Etmon and Marca had improved their scores but couldn’t move past the top three from yesterday.

Steven Van Broeckhoven could better his position for second place with an air funnell burner (7.75 points), Amado Vrieswijk lost one place and ended up in third position and Lennart Neubauer remained on top of the fleet with his air burner funnell combination from yesterday (8.8 points). This also remains the highest score of the whole qualification and it’s going to be exciting to see the young talent from Greece compete for first place in the final tomorrow. 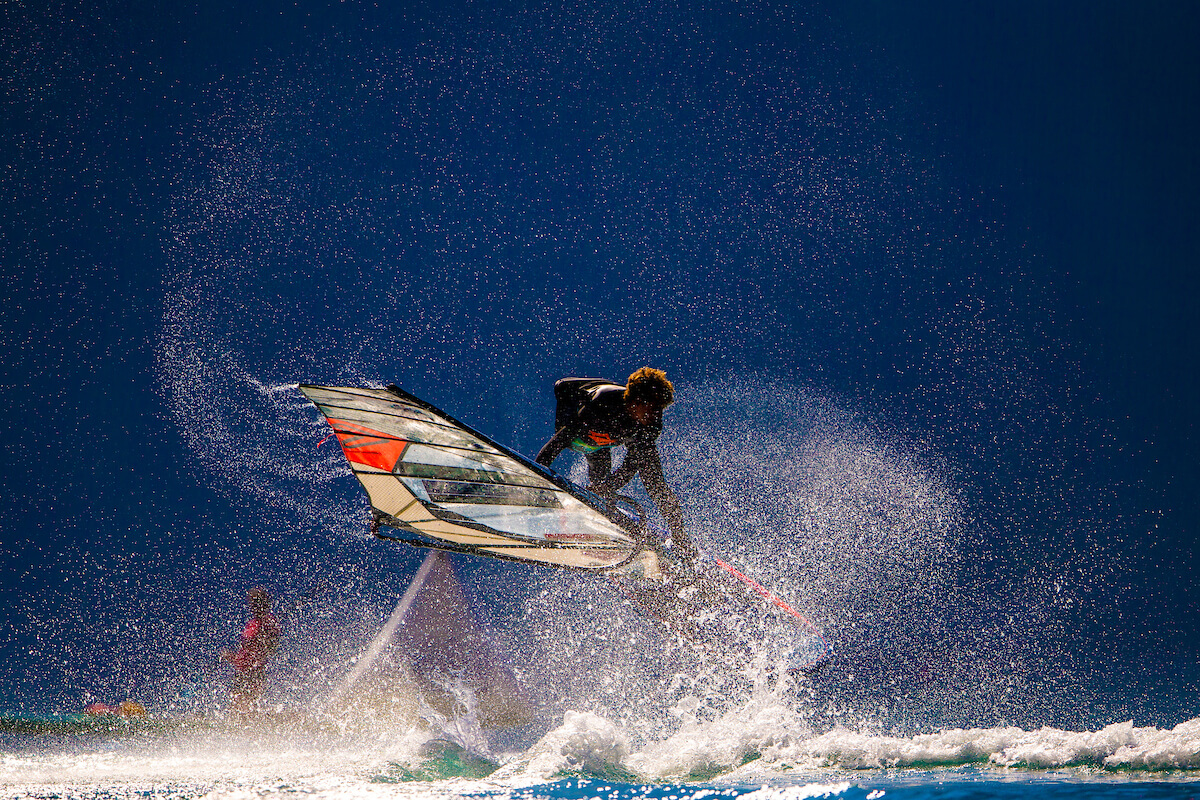 With fleet 1 hitting the water, also the wind picked up – allowing the riders to show some amazing moves and also some pretty nasty crashes. Coming in to the competition one day late has been local Jeremy Plüss. The Swiss sailor only had two runs to make the best one count, but couldn’t properly land his moves. He however could mark down the most spectacular crash of the day, when he ejected midway through an air-burner where he lost his gear that kept on rotating midair for several meters, almost landing on the shore. If there was a prize for the most impressive crash, it would certainly be awarded to Jeremy Plüss. Stefan de Bell from Curacao seemed to have found his rythmn today, but couldn’t make his moves count high enough to advance. The same applies for Taty Frans (Point 7) who showed a stylish air funnell and a burner, but couldn’t stomp a clean landing.

Stepping up her tow-in game has been Sarah-Quita Offringa who went for an air burner in her first run and a very stylish burner one handed in her second run, scoring 6.31 points and securing her place in the final. SQ stated that she enjoyed her experience here a lot, that she was extremly happy with her perfomance today and is looking forward to show more in the final. 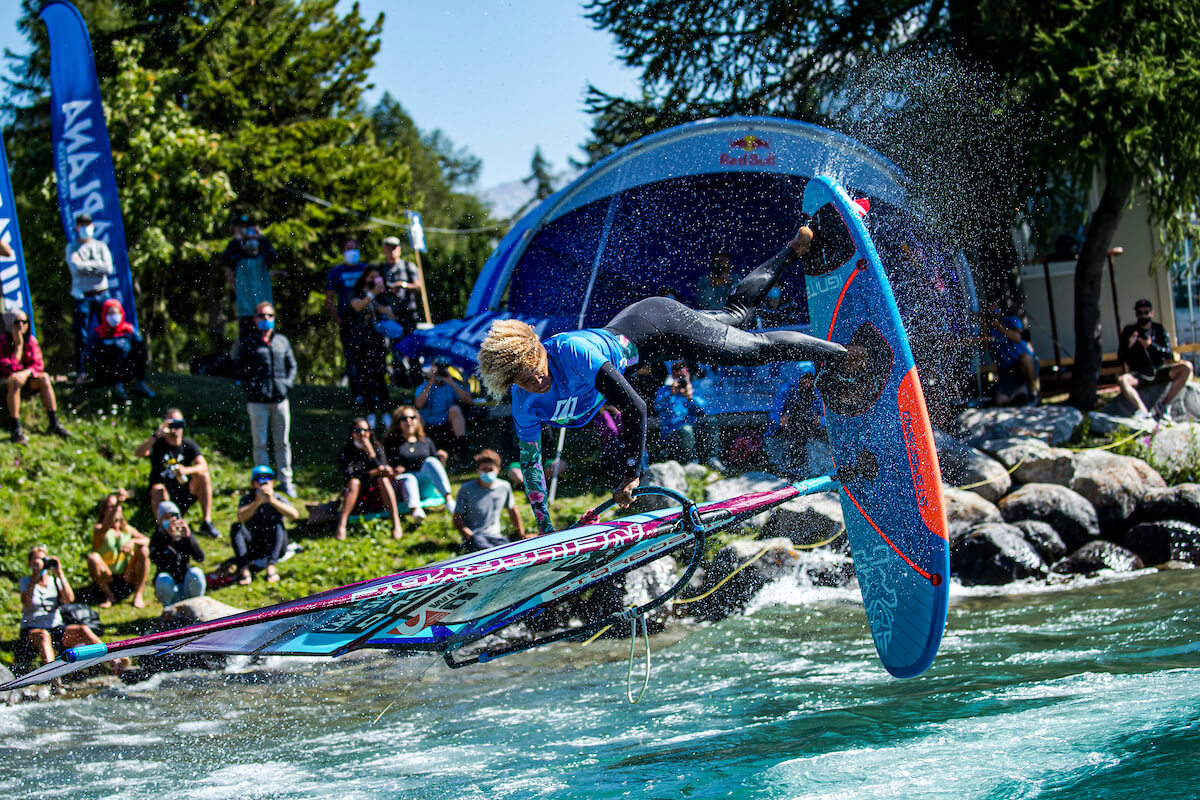 Sarah Quita takes a place in the final ©Sailing Energy

Antoine Albert (Goya/Goya) from New Caledonia landed a perfect skopu (7.81 points) in his first and a planing air burner 360 (7.44 points) in his second run, to take second place in this fleet.

Yentel Caers (Point 7) who had the second highest score of the qualification round after yesterday with his double air culo, played it save today with an air burner 360 attempt as well as a clean culo (5.44 points).

The three riders making it to the final from fleet 1 therfor remained the same.

Just after lunchtime the foilstylers were sent out on the water for another 30 minutes heat. The nine men and three women were competing in THE perfect foiling conditions. Balz Müller, a pioneer in this discipline has been leading the mens fleet, whilst his girlfriend Eva Wyss took first yesterday in the womens fleet. Once again all the riders were on the water together in some kind of overall impression session, where the best powermove and the best carving move from each foilstyler would count. 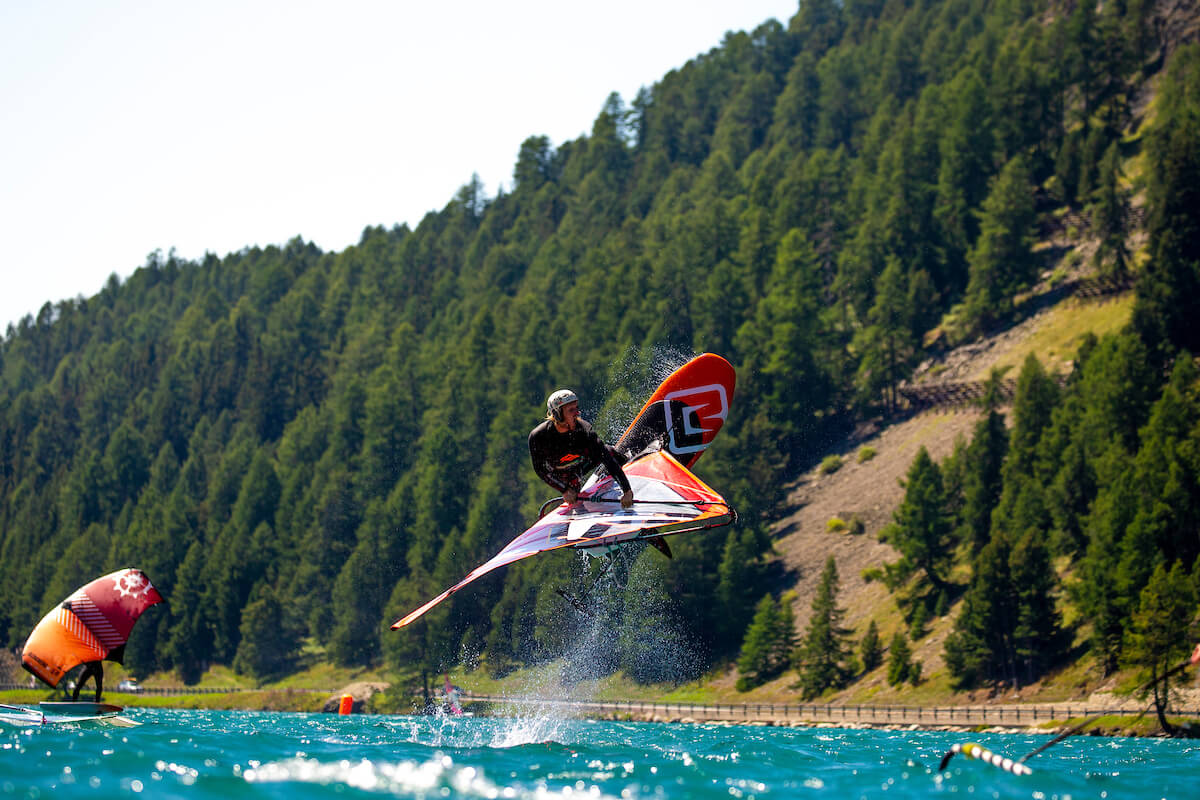 Also on day two of the Foilstyle Championship here at lake Silvaplana, it had been Balz Müller, Steven Van Broeckhoven, Lennart Neubauer and Michael Naef with the most impressive performances. The riders landed culos, konos, burners, funnells and shakas and went smoothly through tripple duckjibes, carving 360ies and no handed heli tacks. Swiss freestyler Balz Müller could dominate one more time and claimed the win today. The fight for second place had been a tough one, but Van Broeckhoven sealed the deal with a nice skopu and a downwind 360 duckjibe combination to count. Michael Naef came in third, followed by Lennart Neubauer in 4th and Antoine Albert in 5th.

Eva Wyss could claim the overall win after a good battle against Anina Heimoz in second and Laura Rudolph in third place.

The EFPT tow-in final will be staged tomorrow morning and will be livestreamed on efpt.net/live.

The six finalists are: