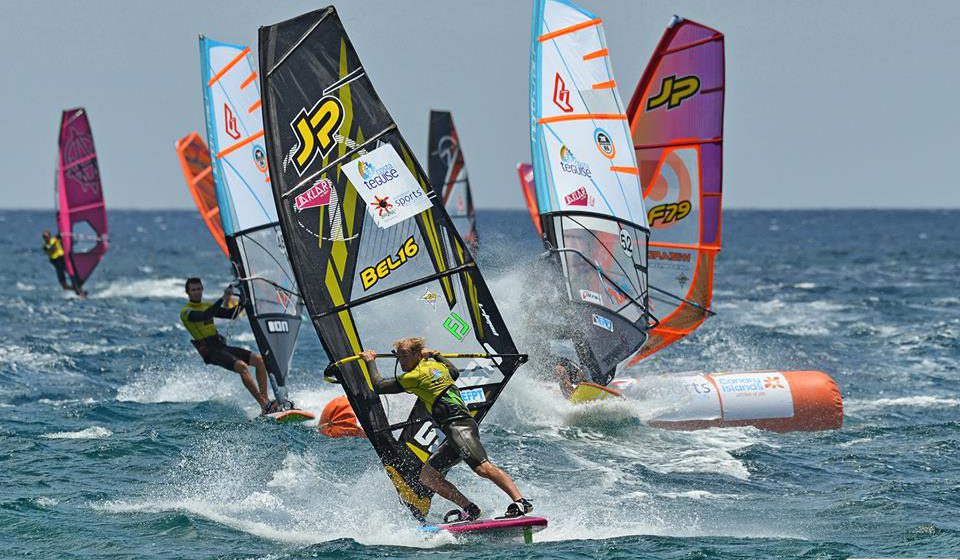 Final day at the EFPT Lanzarote

After completing two whole double eliminations over the past three days here at Costa Teguise, where we have seen exciting freestyle battles and one of the greatest comebacks of a rider in a single elimination ever, the final day started off very easy for the crew and the sailors.

It became kind of a tradition in the past years to run a supercross instead of a conventional supersession at the last day of this event. The competition was open to riders and judges, with twelve competitors signing up. Amongst them head-judge Tom Hartmann, three of the international judges and eight riders. With the likes of Steven Van Breockhoven (JP/Neilpryde), Yentel Caers (JP), Tonky Frans (RRD/RRD), Sam Esteve (JP/Neilpryde), Johnny Yagen (RRD/RRD), Lennart Neubauer (Starboard/Neilpryde), Marco Lufen (North/Fanatic) and Eilon Wilson (Patrik) completing the fleet, the race promised to be a very exciting one, as the course didn’t only challenge the riders speed-wise, but would also challenge their technical skills through a mandatory forward loop, a spock, duck-jibes at every mark and a chop hop over a big inflateable tube. All twelve sailors started at the same time, in a race that was pleasure to the spectators eyes. Local hero Tonky Frans managed to win all three heats, followed by Steven Van Broeckhoven on overall second and Yentel Caers on overall third place.

Even though the fun aspect was predominant in this race, the Sands Beach Resort provided a prize for the first place: a 1-week stay at their 4 star hotel for two persons! Tonky Frans passed this one on to the youngest competitor of the event, Lennart Neubauer from Greece, who proved his potential once again to become a top freestyler in the future. The spirit at the event was amazing with the organisers being just as passionate about windsurfing, as the crew and the riders themselves. We’ve seen outstanding action on the water and incredible performances by the competitors. The EFPT Lanzarote has one more time been an absolute pleasure to attend and we are already looking forwards to return to this windy island in 2018!