The plan for the final day of the EFPT Geneva was simple: to crown the first ever European Foilstyle champion. What started as a dreary morning soon shifted towards more sunlight and an opportunity for wind. Unfortunately the conditions never improved quite enough, meaning that the foilstyle competition did not take place this season. This didn’t mean there was no action on the water. With the arrival of freshly baked dad Balz Müller, the crowd got a show of the true essence of freestyle, regardless of the wind or equipment he was on. With a sunny tow-in super session to close off the day the event drew to an end with the official award ceremony. 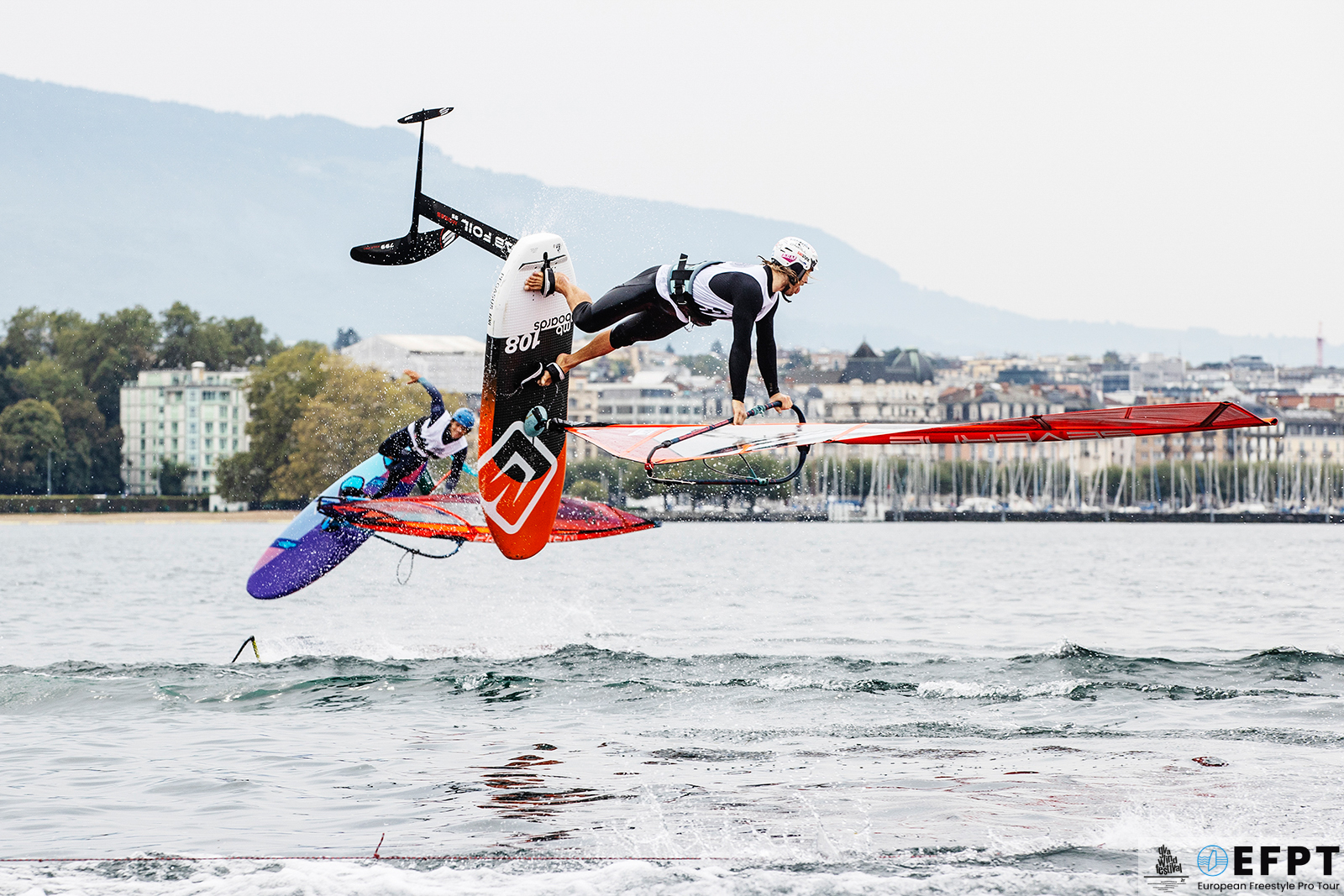 Balz Müller and Sam Esteve going for some syncro foilstyle in front of the city of Geneva. Picture by John Carter.

The competition area was set up early in the morning as race director Danny Kater was constantly checking the most recent forecast model updates. In the meantime three riders went out to test the conditions: Sam Esteve (JP/NeilPryde), Balz Müller (Severne) and Jakob Müller. Even though the wind was too weak to get flying, there was enough to get towed onto the foil and then perform some moves. Being known for coining synchronised freestyle together with Julien Mas, Esteve quickly adapted it to the tow-in foilstyle conditions introducing the Müller brothers into the mix. The result was some stunning imagery in front of the city of Geneva. 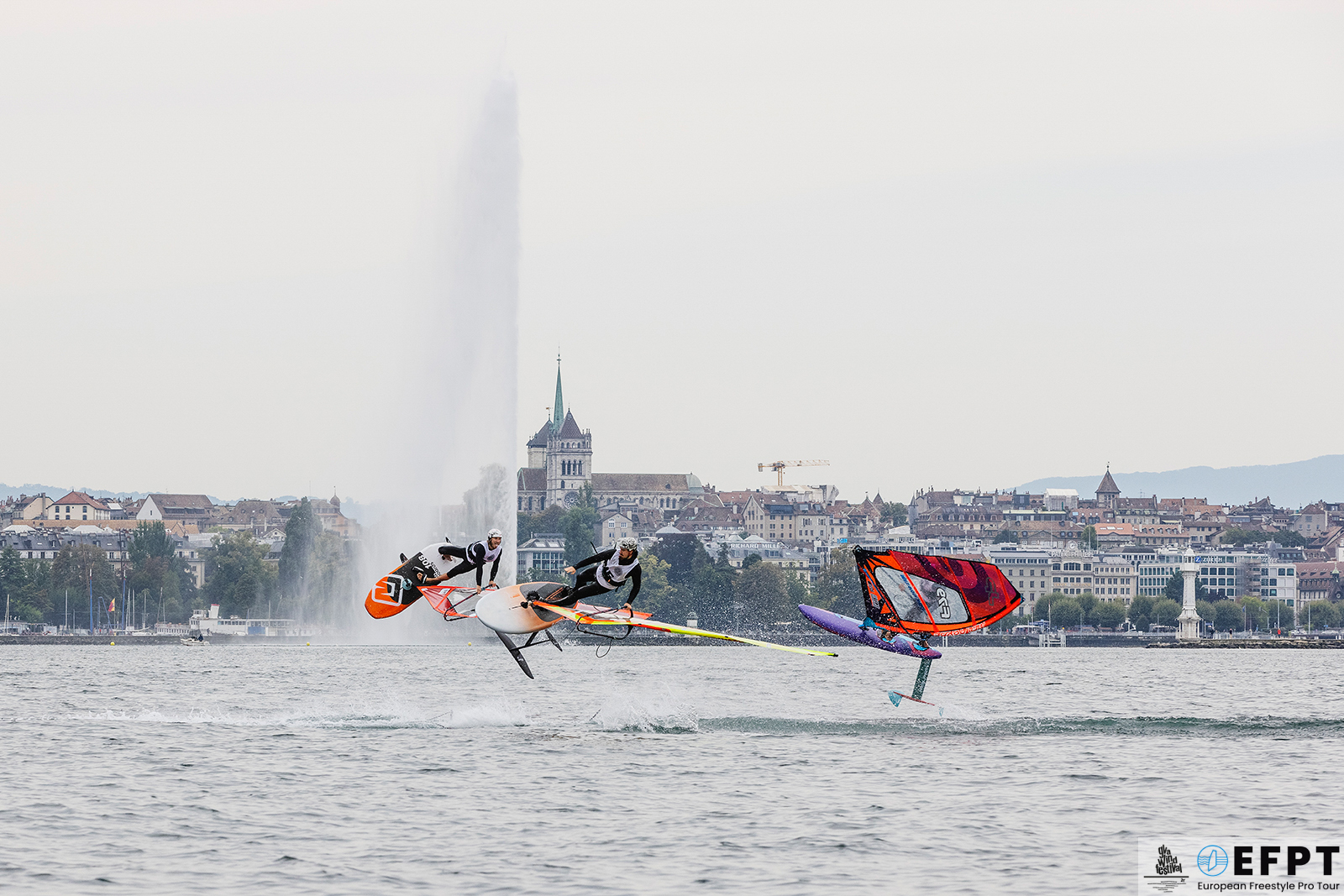 The Müller brothers and Sam Esteve enjoying the skyline of Geneva. Picture by John Carter.

As the wind completely faded, focus shifted to no-wind alternatives. Even though the winners of the tow-in competition were already decided, a super session of epic proportions was on the agenda. The riders who took the podium the day before showed that they really were in a league of their own. All the brakes were off and with nothing left to loose for the riders, the public got to enjoy the best tow-in action ever seen. Tripple rotations began to feel oddly normal, and people were starting to feel their necks from having to look up so far each time an athlete hit the perfect wakeboat ramp. Make sure to watch the highlight video but be warned that it might just make you dizzy:

The event was concluded with an award ceremony at Tropical Corner where organisers Fabien and Quentin honoured all the athletes who performed at the GVA Wind Festival.  No Foilstyle result meant that the tow-in results were official for the event – and counted towards the overall European Tow-in title. Taking the win in Austria and Silvaplana, as well as taking second here in Geneva, allowed Lennart Neubaer (Starboard/Severne/MUF) to claim his second European title after the Juniors one this year. For this event it was Yentel Caers (JP/NeilPryde) who took first, and Sam Esteve who was third. The women also had their own division in which Lina Erzen (Duotone) excelled by progressing run to run. She was followed by Lucie Honegger (Severne) who was a rookie in this discipline, as was Farrah Hall who became third. 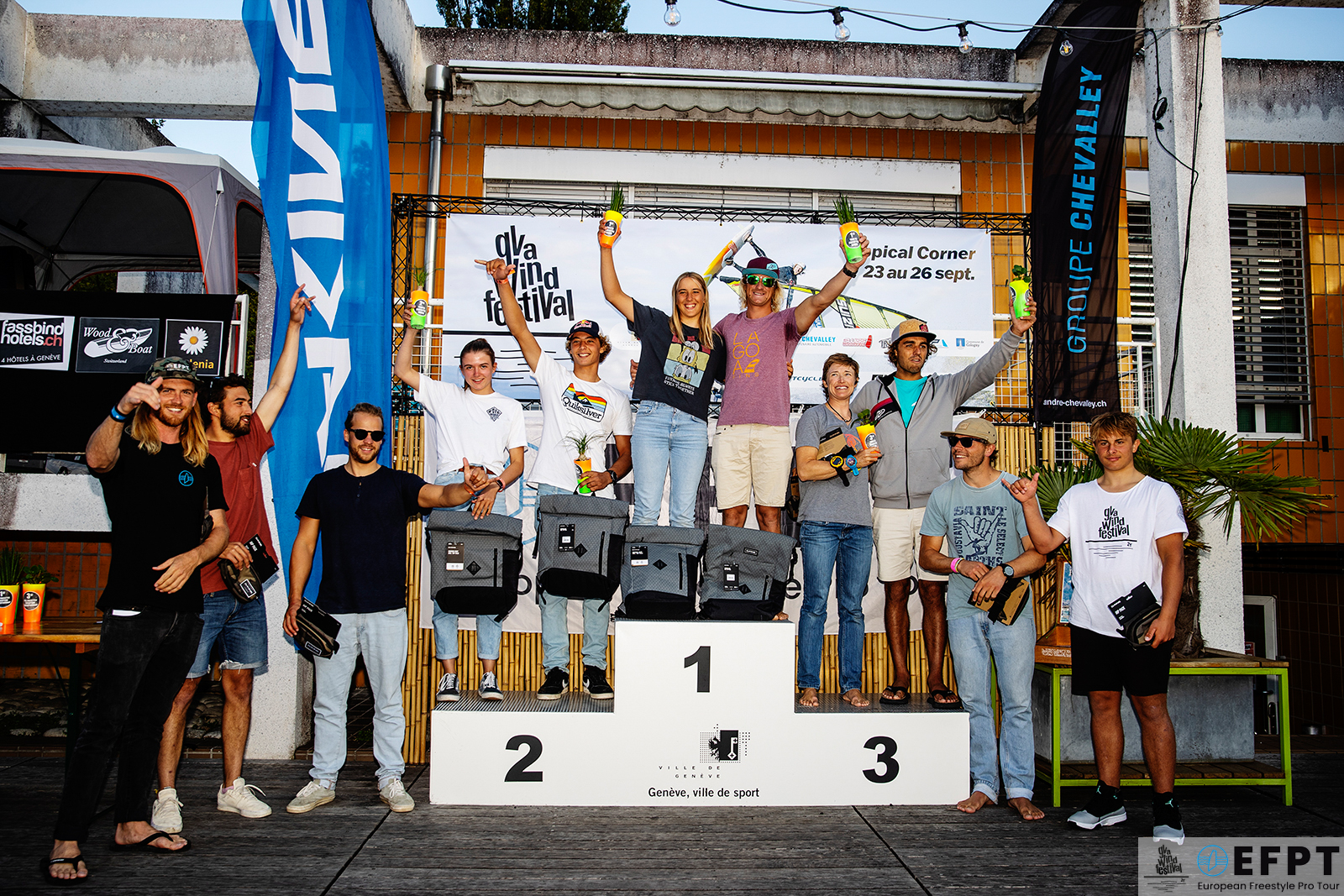 The top riders in the tow-in discipline at the EFPT Geneva. Picture by John Carter.

The European Freestyle Pro Tour is honoured to have been hosted by Tropical Corner and the Boards Switzerland magazine. To bring the highest level of freestyle windsurfing to a packed beach in a city is simply unreal. In four days we saw the discipline of tow-in elevate to an insane level, accompanied by loud cheering and excitement from the crowd. A massive thank you goes out to the organisers who ensured a smooth, professional and above all extremely fun event. The EFPT will be back in Geneva next year!

If you’re not saturated with the jaw-dropping action yet, you can rewatch all the video content from the event here.