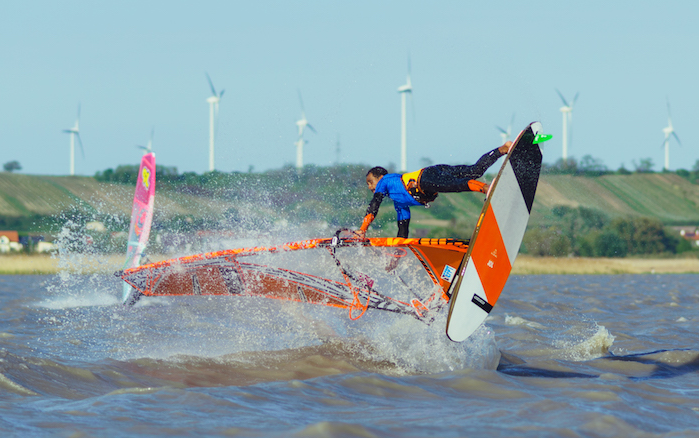 Frans wins the EFPT at the Surf Worldcup

It is done! Tonky Frans (RRD/RRD) from Bonaire took victory today in the EFPT at the Surf Worldcup in Neusiedl am See and becomes the new leader of the European Freestyle Pro Tour. After an exciting final and super final the all time happy rider won this five star event in howling southerly winds – but first things first…

Since the forecast looked huge from the morning onward, race director Tom Hartmann called the riders to action at 9.30 am. The remaining sailors of the double elimination were eager to fight for better positions or to defend their rankings, yet the lake here in the east of Austria remained calm until midday. Just when people were starting to doubt the weather forecast of this area, the southerly wind started to pick up more and more, to then deliver an action packed day.

With eight minutes heats and three moves counting each tack, the double elimination has seen some incredible performances and close calls, to say the least.

In one of the first battles of the day, British Sailloft/Patrik rider Adam Sims sailed a fantastic heat against Julien Mas (Gunsails) from France. Both sailors landed culos, burners and konos on both tacks. Sims has been planing out of most of his moves and topped it all up with a nice pasko and a backloop to take down the Frenchie. In his next run he had to face Swiss RRD rider Loick Spicher, who was on his 4.1 Style Pro and his 93 litres board. Spicher had been almost unstoppable today, landing stylish kabikuchis on both tacks in every heat. He left Sims not much chance and continued his run up in the ladder by defeating Mattia Fabrizi (Patrik) in the next round. With a point difference of 1.7 only, the Italian freestyler had to give way to Spicher, who could only be taken down by former European Champion Steven Van Broeckhoven (JP/Gunsails) from Belgium.

Coming from the other side of the draw has been Julian Wiemar (Severne/Starboard) from Germany, who beat his friend and trainings-buddy Valentin Böckler (Gunsails) and Max Matissek (North/Fanatic) from Austria in the consecutiv round. Both riders were sailing a very good heat and the score favored the German rider by 0,5 points in the end. Wiemar was putting on a great fight against Van Broeckhoven in the battle for sixth place, but had to give way to the more experienced Belgian.

Van Broeckhoven seemed to be on a mission, but so was his next opponent Sam Esteve (JP/Neilpryde) who took fourth place in the single elimination. Both riders were putting on an incredible show, with Esteve landing a perfect no handed burner, a skopu, kono and culo on starboard and a shaka 360, kono and culo on porttack. Van Broeckhoven could mark down a burner 360, air funnell into funnell, culo and half switch kono on starboard and a lollypop, shaka flaka, shove-it spock and culo on port tack. When the horn went off to finish the heat, Esteve has been missing a move on port tack but could still win over Steven by 0,5 points. In the next round Esteve faced Riccardo Marca (North/Fanatic) from Italy, who was sailing a solid heat to defend his third place, yet couldn’t manage to stops Esteve climbing up the positions. The wind had been increasing more and more during the later afternoon and the riders were stacked on their 4.4s. Conditions that would favor Esteve in the fight against Giovanni Passani. In one of the highest scoring heats of the day, the Frenchie could win over the Italian 0.09 points only. They scored 44,66 and 44,57 points respectively landing stylish double powermoves on both tacks.

Esteve moved on to face Tonky Frans, winner of the single elimination, who was on fire in the lighter winds yesterday. The JP/Neilpryde rider put together an amazing heat, including highest scoring move of the day, an air skopu (7.55 points) and took down Frans, which led to a super final. Frans was on fire in the following round, proving that he was still on top of the game. The highest scoring heat of the day (46.92 points) sealed the deal for the Bonairean sailor. The evening has been rounded off with a supersession close to the shore, where countless spectators gathered to watch the freestylers performing their best tricks. Steven Van Broeckhoven could win the supersession with a double culo, second place went to Passani with an air-kabi and Riccardo Marca took third place.

With a low wind forecast tomorrow, the conditions will be perfect for the big tow-in final. Stay tuned.