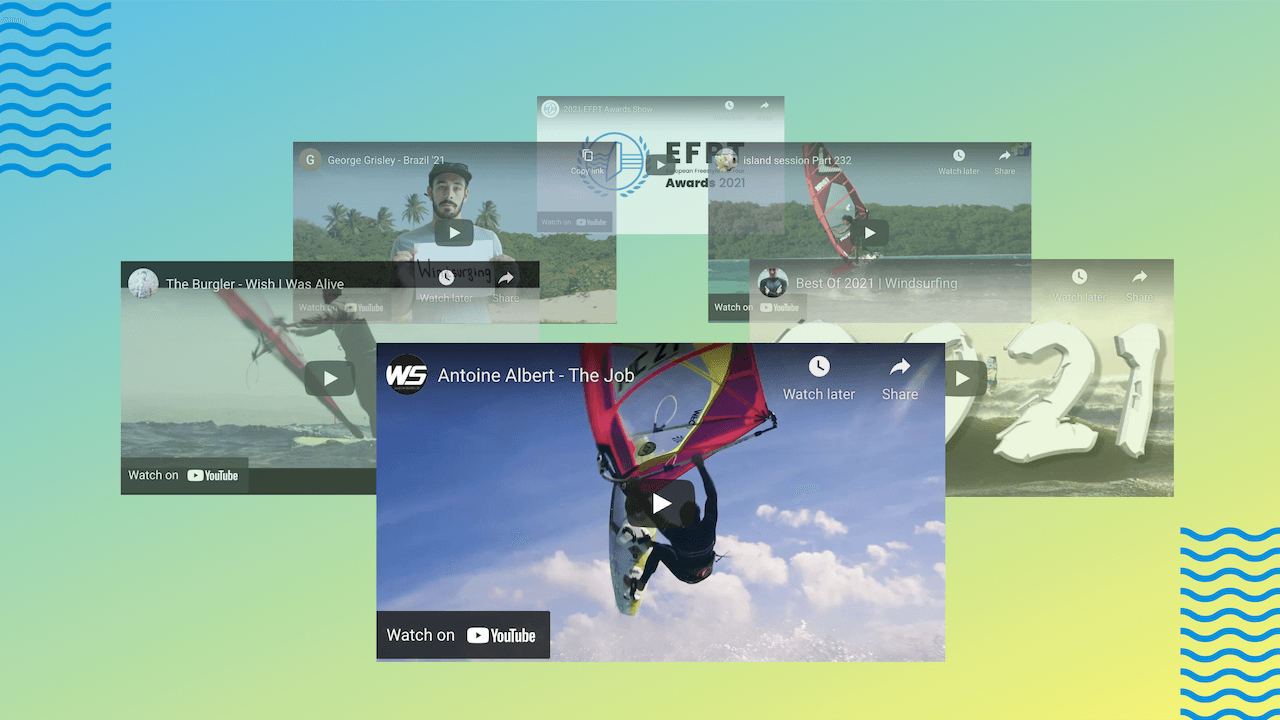 As the new year is off to a windy start, we are still due our last gust of freestyle action videos from 2021. December blessed us with some new high quality windsurfing clips, and in case you missed them, we’ve collected them here for your viewing pleasure. Grab some popcorn, get comfy, and let’s get right into it.

First up is a video by Antoine Albert (Goya Windsurfing). The New Caledonian has had a great season on tour, coming in 7th at the EFPT Theologos. In the video he talks preparations for the PWA in France, training in Tarifa and the confidence he has built up as a professional windsurfer.

Producing the video and taking us along on Alberts journey was Foivos Tsoupras, who is a great freestyle windsurfer himself, surprising everyone with his creativeness in the tow-in discipline at the EFPT GVA Wind Festival this year.

Another Goya rider known for the production quality of the videos he stars in is Yarden Meir. In December he showed us he can bring the action off of the water as well, acting in a music video for local band The Burgler. Producing yet another quality windsurfing production, Nadav Cohen, who filmed and edited the music clip, is proving to be a staple in the freestyle windsurfing video scene.

Surely any windsurfer that has an office job can relate to the clip. And if you can’t then you are probably George Grisely who instead just moved his office to the beach in Jericoacoara, Brasil. The brit shows off his power moves around a multitude of spots:

Want to temporarily move out to Brasil as well? Make sure to read the spot guide written by George himself here.

Up north, but on the same side of the globe, the Bonaireians are popping off as always. As usual, Kuma Movie was there to capture the action.

Back in Europe, Bastian Grimm (Fanatic/Duotone) released his best clips from the 2021 season.

And finally, the longest piece of Freestyle Windsurfing content in December must have been our very own EFPT Awards. The show announced the European Champions, Rider and Rookie of the year, as well as the winners of all the Award categories. A true display of the all-time best action in our sport. If you’ve missed the awards then here they are:

And although they were not published in December, two Award category winners deserve a special shoutout in the Monthly Freestyle Roundup series. The best video part by a rider was won by Sam Esteve (JP/NeilPryde) for his appearance in REALIFE. Showing the absolute best of what our sport has to offer, Sam deservedly takes the Award.

The Best Produced Video Award went to Guy Briche and Alex Stamataris. Showing the life of Lennart Neubauer (Starboard/Severne/MUF), “Mowgli the Windsurfer” is a masterpiece of a windsurfing video definitely worth another watch.

That’s it for this month! Hopefully you are back up to speed with the latest in freestyle videos. We will see you back next month when we flip through the catalogue for January.