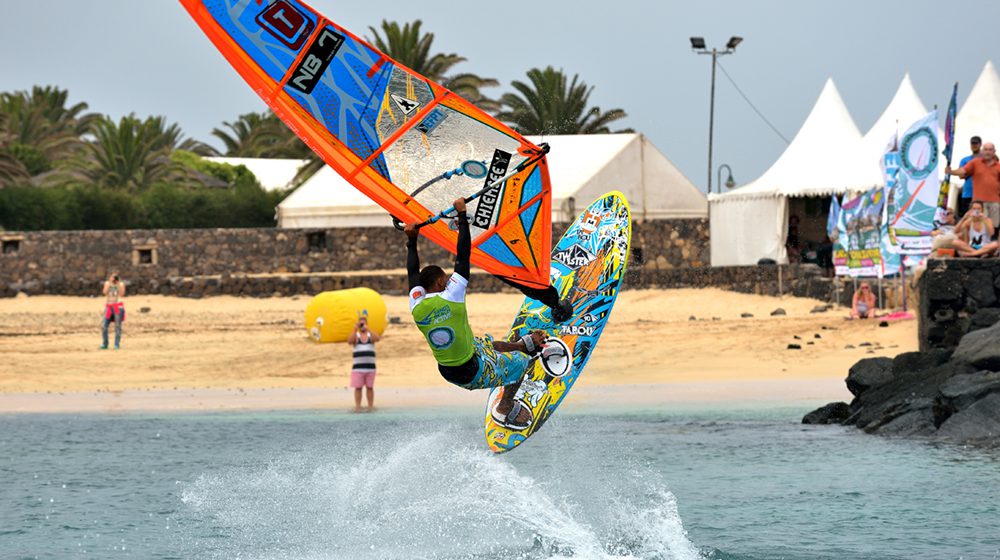 With a rather marginal forecast we started the day with the skippersmeeting at 10.00am this morning. Just as the day before though, an unusual weather situation over the islands of Lanzarote and Fuerteventura led to a messed up windsystem and cloudy skies.

Just before midday there were some dark clouds passing through bringing some sailable gusts. Jeremy Plüss (Tabou/Gaastra) and Hugo de Sousa (RRD/RRD) gave it a try but soon ended up on the beach again, leaving the competitors as well as the organiser very disappointed.

To keep the riders busy though and to get the crowds to the beach a jetski tow-in was scheduled for 4.00pm in the afternoon with the outlook for a tow-in competition tomorrow and the day after. In case the conditions wouldn’t improve Antxon Otaegui (main organizer of the event) agreed to split half of the prize money  between all the riders, which is always the case if there is no wind and to take the remaining 2.000€ as prize money for a tow-in contest. The sailors seemed to be very happy with that arrangement and several guys used the time today to train behind the jetski. When Tonky Frans (Tabou/Gaastra), Mattia Fabrizi (North/Fanatic) as well as Yentel Caers (North/Fanatic), Jeremy Plüss (Tabou/Gaastra), Hugo de Sousa (RRD/RRD), Rafa de Windt (F2), Loick Spicher and Nicolas Akgazciyan put on a show, the beach started to fill up as more and more people stopped to watch. Smartphones and cameras were raised as the riders circled through burner 900s, skopus, funnels and burners. Several spectators were running to the pier to see the action and every attempt was honored with applause and cheering. Mattia Fabrizi going for a burner 900

Hugo de Sousa from Brasil tried tow-in for the first time ever and straightaway managed to get pulled into his first tow-in burner, even if he was on the wrong side of the jetski for the whole run. All the riders seemed very impressed and also the audience on the beach loved the effort of the young Brasilian. Hugo de Sousa with his first ever tow-in run

With some expected thermical wind in the morning the skippers meeting was scheduled for 09.00am tomorrow. If there is not enough to run the heats we’ll start with the tow-in competition and the first fleet at 01.00pm. The second fleet will start at 04.00pm. The best ten riders will go to the final on Saturday. We all got our fingers crossed for tomorrow though and remain positive about the potential of running the freestyle.