The ultimate day here at the EFPT Las Dunas Costa Brava has been all about the double elimination in howling winds with more to 40 knots at times. The riders started off on their 4.4s but had to rigg down to their 4.0s and below fairly soon. What seemed like a beautiful illusion at the start of the week, became reality today and provided the perfect playground for the remaining freestyle competition.

There have been some upsets in the single elimination and therefor a real tension in the air. Some sailors were determined to work their way up in the double, some others new todays conditions would suit them and their eyes were set on the prize.

The first rounds of the double elimination of the EFPT juniors had already been started yesterday and left only the fight for the three podium positions on this epic day. U18 EFPT champion of 2018, Eugenio Marconi, took out Frenchie Nil Bacon to then face Lennart Neubauer in a strong fight for the first place. Lennart landed an air flaka 360, shaka 360 and a backloop to count on port-tack and a burner, kono and skopu on starboard. Marconi answered with a shaka, a forward and a ponch on port and a burner, culo and skopu on starboard. The Italian had been leading until the last minute when Neubauer pulled the clean backloop (7,5 points) that brought him victory eventually.

Amado Vrieswijk, who had been travelling to Costa Brava for the upcoming PWA Foil race, stated after watching the action of our juniors:“Looks like I will have two more years and then they’ll take over!“ 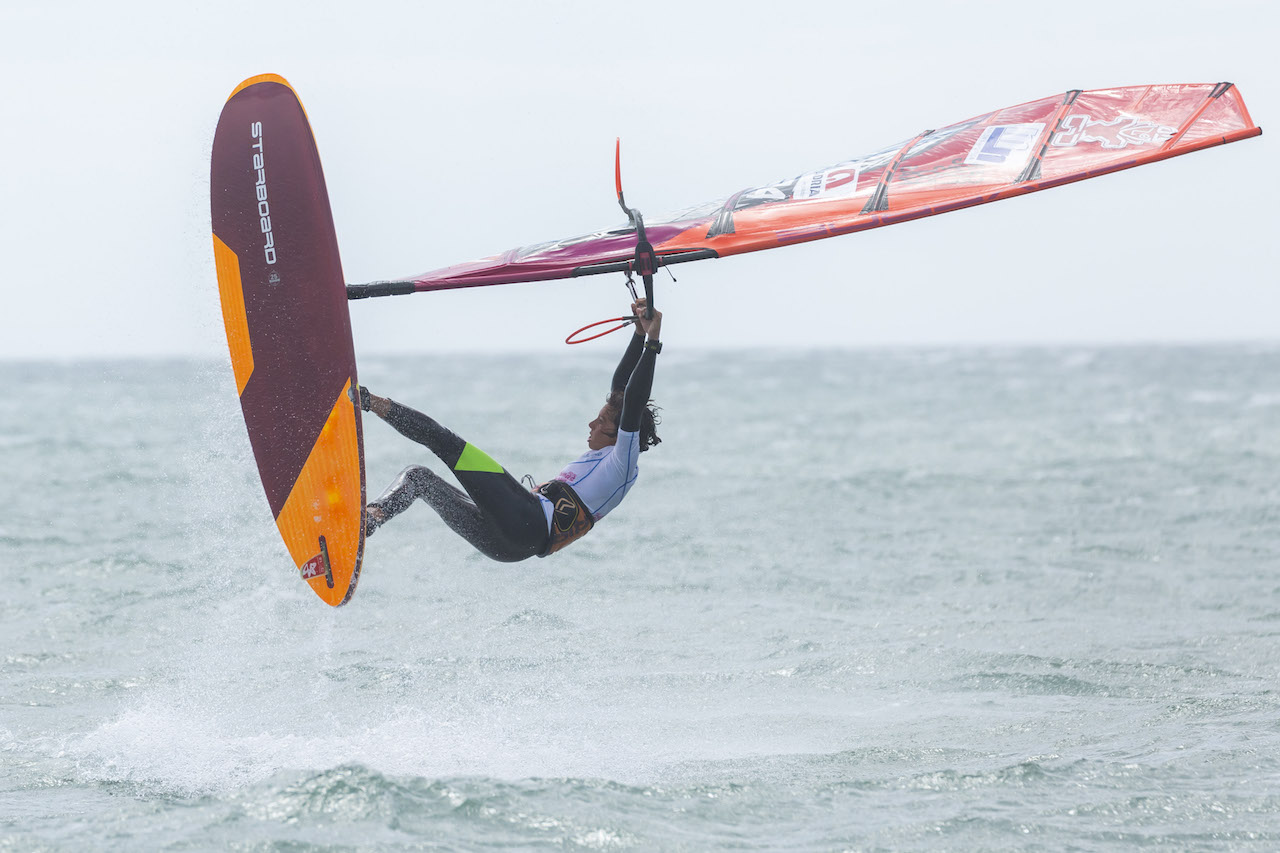 One of the biggest surprises today had once again been Mathis Mollard (JP/Neilpryde) from France, who had his international debut at this event. Mollard, who is already going by the nicknames of ‚mini-Sam Esteve‘ and ‚mini-Müller‘ (editors note: Balz Müller), was praying for conditions like that and proved that they favored him. He was landing one handed burners, impressive air skopus and several other power moves to defeat Lennart Neubauer (Severne) in a very close heat to face Giovanni Passani in the next round. Giovanni Passani, who is a contender for the title this year, seemed to struggle a bit with the strong conditions and could beat Mollard by 1,3 points only. Mathis Mollard eventually ended up in 9th position overall at this event, which is an extremly strong result for his rookie status. 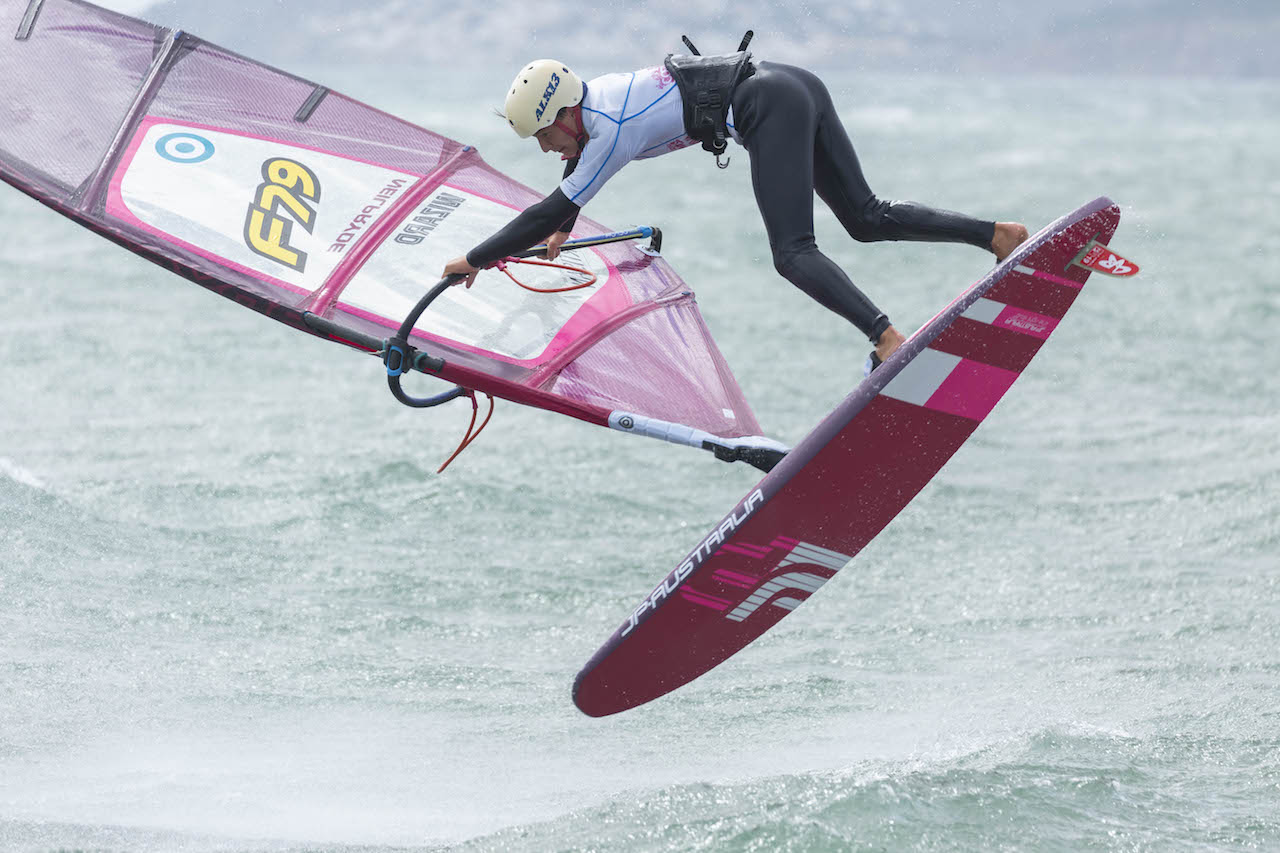 Mattia Fabrizi had been a force of his own today, winning four heats in a row by taking down Nil Bacon, Yarden Meir (Goya/Goya), Francesco Cappuzzo (RRD/RRD) and Sam Esteve (JP/Neilpryde) in a very close heat, to then be beaten by Antoine Albert (Goya/Goya). The New Caledonian scored perfect 10s by all the judges for his air kabikuchi on port-tack, which happens quite rarely. Albert travelled several meters through the air and landed this big move perfectly ankle dry. 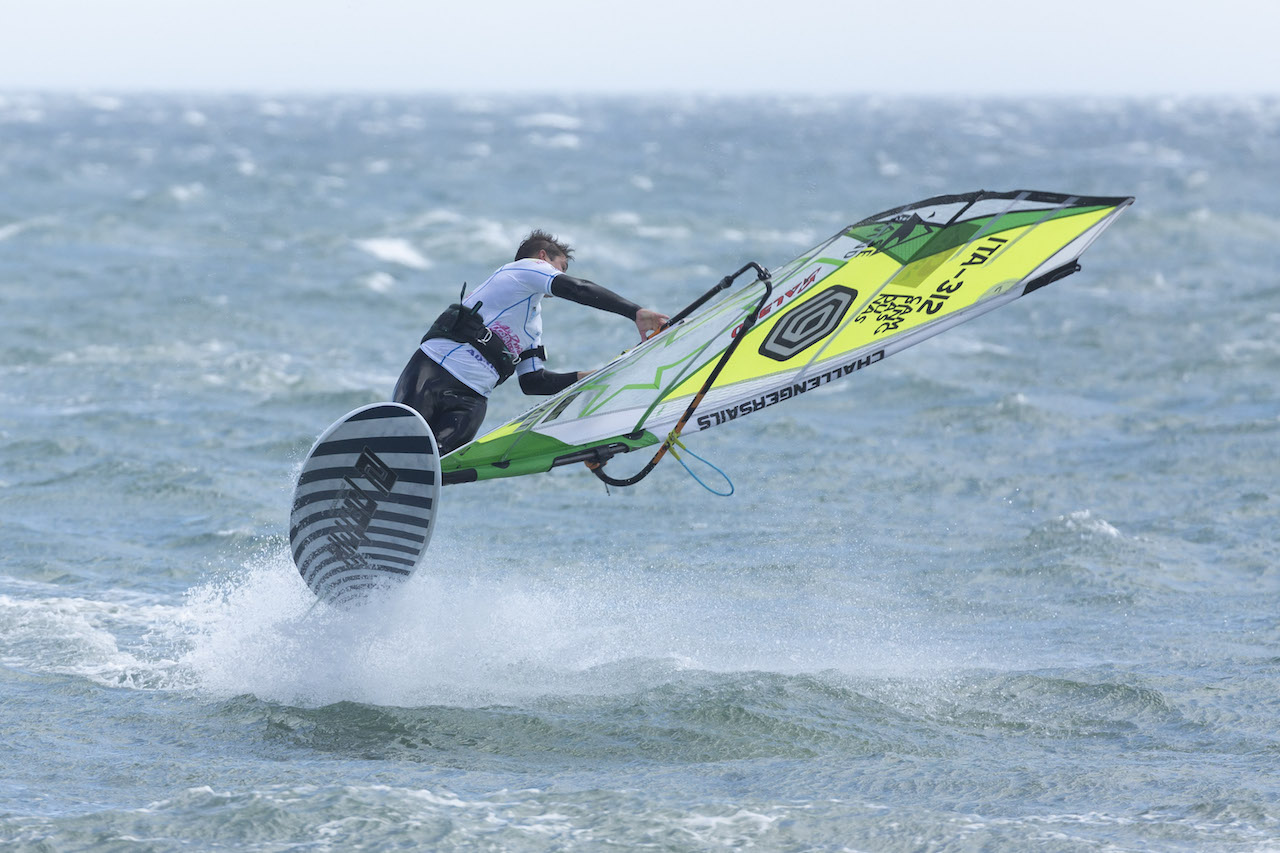 In his next heat against Davy Scheffers, placed 4th in the single elimination, Albert stuck to his routine, yet had to give way to Scheffers who had a burner, air skopu and pushloop to count on port-tack and a kabikuchi, air spock and bongka 360 (on the horn!) to count on starboard-tack. Scheffers moved onward by 0,84 points only to face Jacopo Testa (RRD/RRD).

The heat of Testa against Scheffers was something else. Already half way in this 10 minutes heat, Testa had already scored 45 points. The Italian landed a double forward, a burner one handed, a bongka, a perfect pushloop and a perfect shifty going out and a spock culo, spock kono, culo, toad and shove-it spock coming in – just to name a few moves of the ones of the judging sheets. Testa even attempted a spock into air-kabikuchi in the end, but couldn’t make the landing. With 55,20 points Jacopo managed to pull the highest score of this competition. 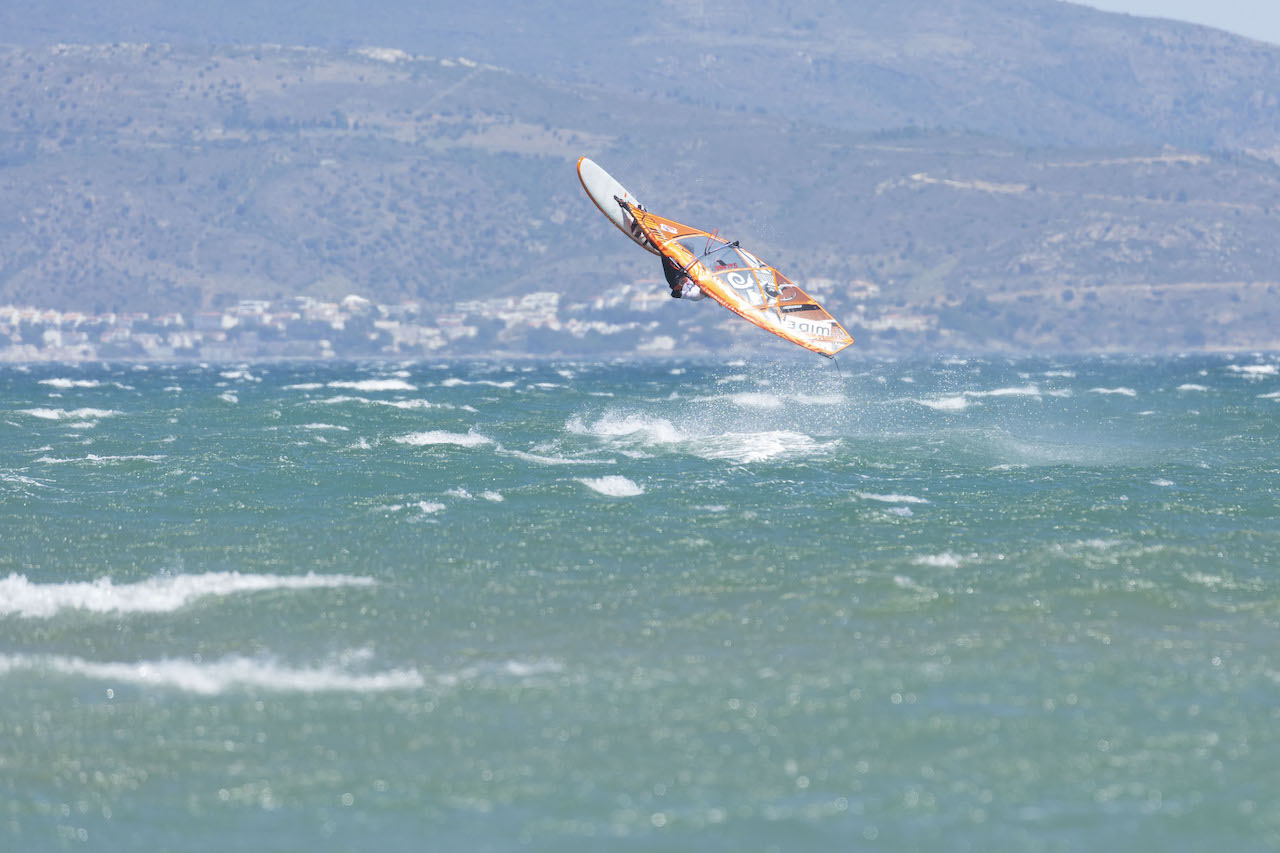 Steven van Broeckhoven (Gunsails) had been sitting in second place after yesterdays single elimination and was the next one to face for the RRD rider. Van Broeckhoven put together a decent heat which was a pleasure to watch, however didn’t look as confident as usually. Whilst both riders landed some radical moves like shifties, bongkas and double power moves, the scoring favored the Italian in the end.

Jacopo Testa, who is finally back on tour after skipping it last year due to restrictive rules, looked like he was on a mission. Yentel Caers, who loves the strong wind, had been ready though to defend first place with all he’s got. In this epic final, Caers landed a pasko, bongka, shifty and ponch to count on the way out and a skopu, double culo, burner funnel, skopu and spock culo coming in. Testa answered with big moves of his own, however lost some points on diversity on starboard tack whilst also missing another bigger maneuver on port. Caers could therefor claim victory after an impressive performance in challenging conditions. It is a great start for the Belgian, who will travel onward to the next competition of the EFPT in Vieste, Italy – starting next week. 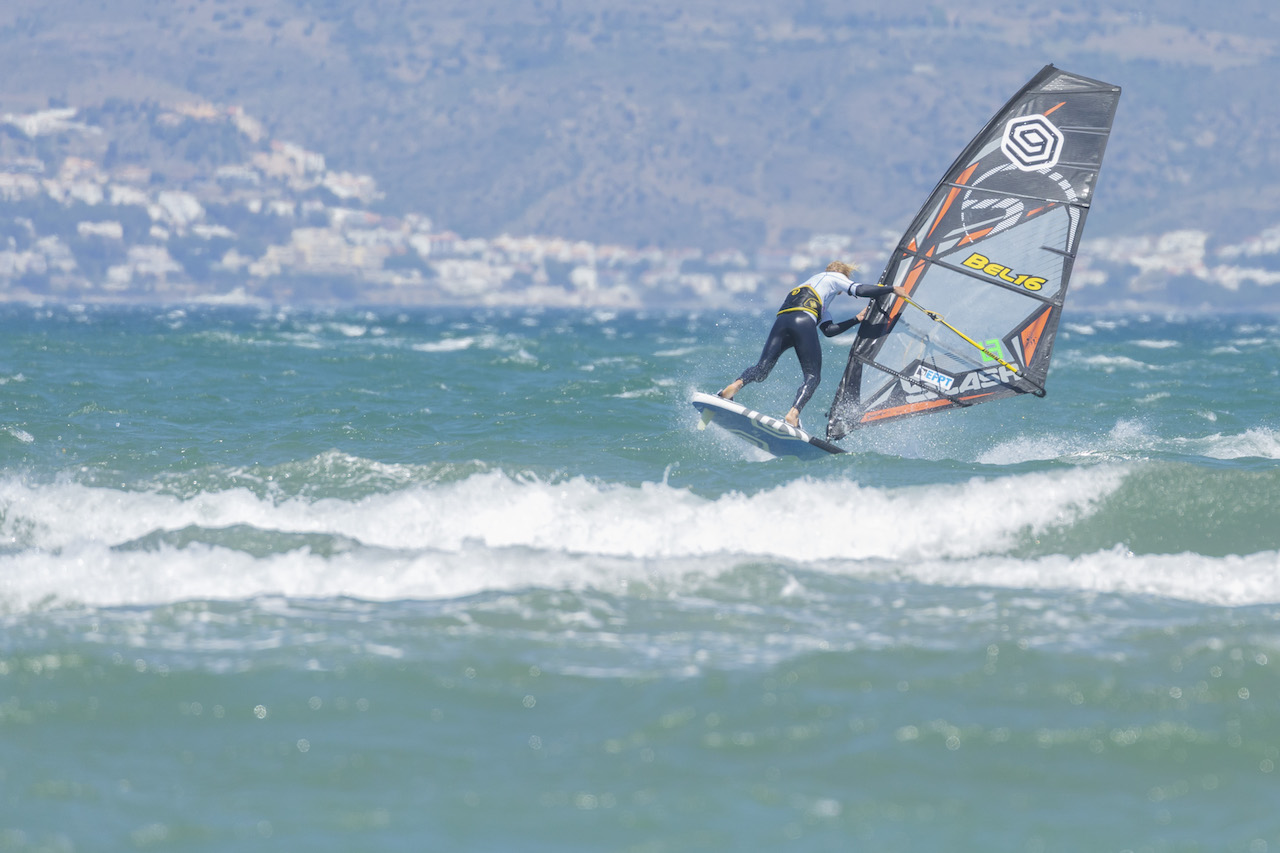 Yentel Caers on top of the pro fleet (Job Vermeulen)

We are looking back on a perfect week, with some final action that has been off the charts. The stay here at Camping Las Dunas has been organised as comfortable as possible for everybody and the crew and riders have been welcomed with hospitality that has been second to none. We are looking forward to come back next year, for the third edition of the EFPT Las Dunas Costa Brava. 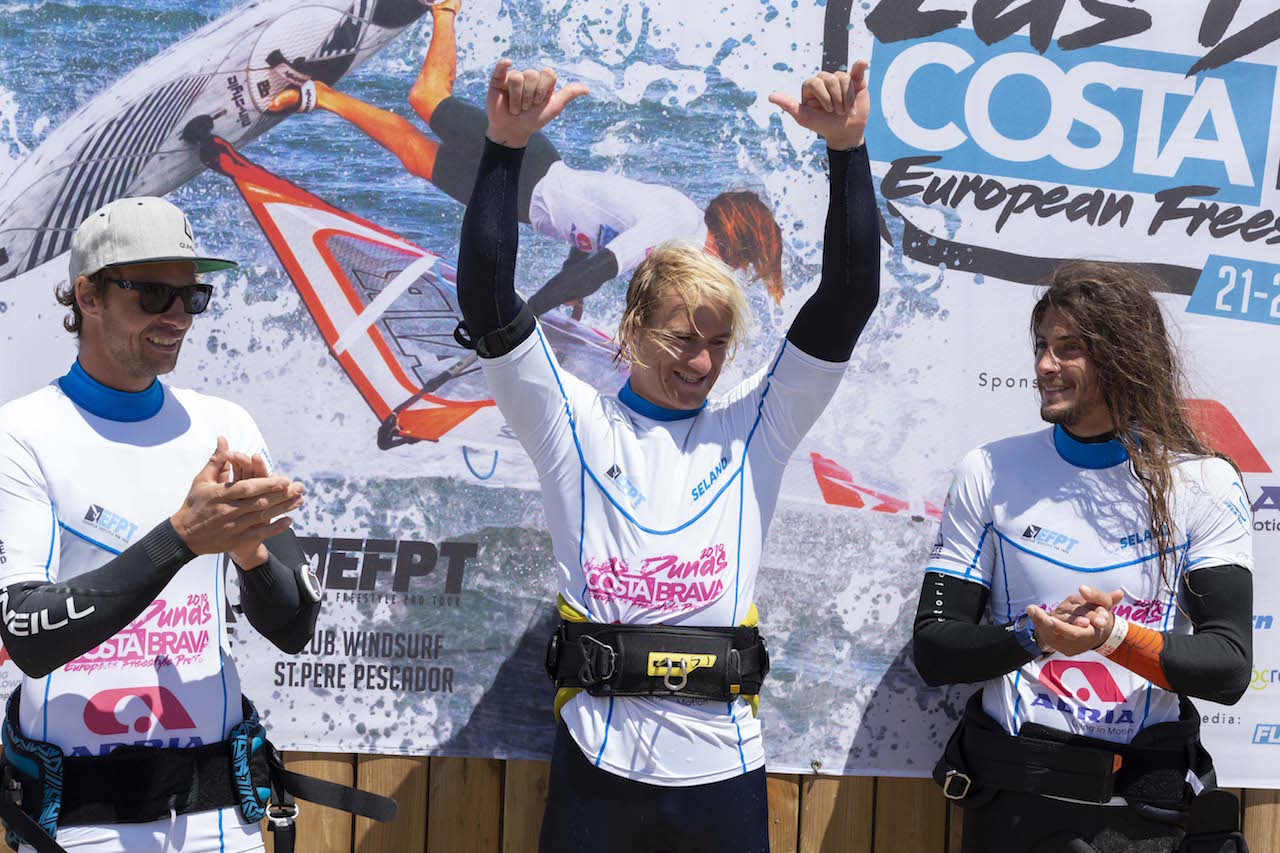 Top 3 of the event (Job Vermeulen)