Day 3 at the Las Dunas Costa Brava, here at the Camping las Dunas, kicked off with the second tow-in qualification fleet, to determine the five remaining riders that would compete in the final. The agreement involved, that in case of no wind, the tow-in result would be official and would also count in the tow-in overall ranking of 2019. With a decent forecast for the weekend not all riders joined in, yet the majority did and provided a great show.

On top of the game had been Antoine Albert (Goya/Goya) from new Caldonia, who could convince the judges with a skopu that scored (6,84). Placed second had been Steven Van Broeckhoven (Gunsails) with a double funnel (6,66) and Adam Sims (Patrik/Sailloft) could secure the third position with a perfect spock (5,72). The water had been glassy and flat with zero wind which made the riders struggle a bit with speed and power to go into second rotations and also to land their maneuvres as safe as they are used too. Francesco Cappuzzo (RRD/RRD) from Italy secured a palce in the final with a spock (5,31) and one of our EFPT juniors, Nil Bacon, jumped into fifth place, landing a nice burner (5,28) to dispatch Mattia Fabrizi (Patrik), Eliran Levi, Eugenio Marconi and Stefan de Bell. 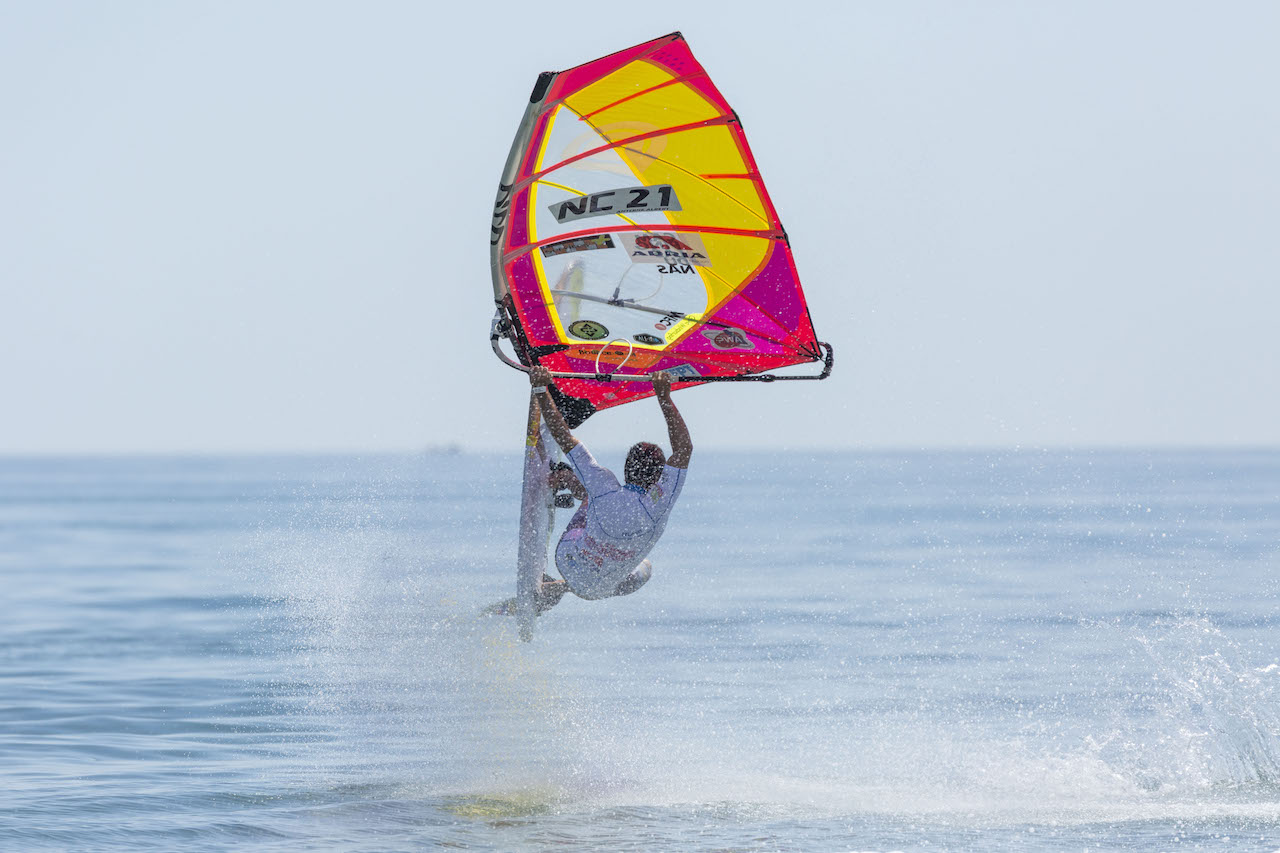 To give our youngest competitors also the chance to improve their tow-in skills and to compete against each other, another tow-in junior competition had been launched in the early afternoon. It has been extremly nice to see how motivated the juniors went into the race, cheering for each other, filming each others moves and helping each other out. Mathis Mollard (JP/Neilpryde) from France, who entered his first EFPT competition here at Costa Brava, could claim third place with an air funnel into funnel (5,94). Placed second was once again Nil Bacon, who landed all of his three attempts, but scored highest with a burner into funnell (7,22) that could have easily caused some upsets in the competition against the pros. Taking victory in the juniors tow-in competition has been Stefan de Bell (Patrik) from Curacao, who landed a well stylish double air funnell (7,28)! 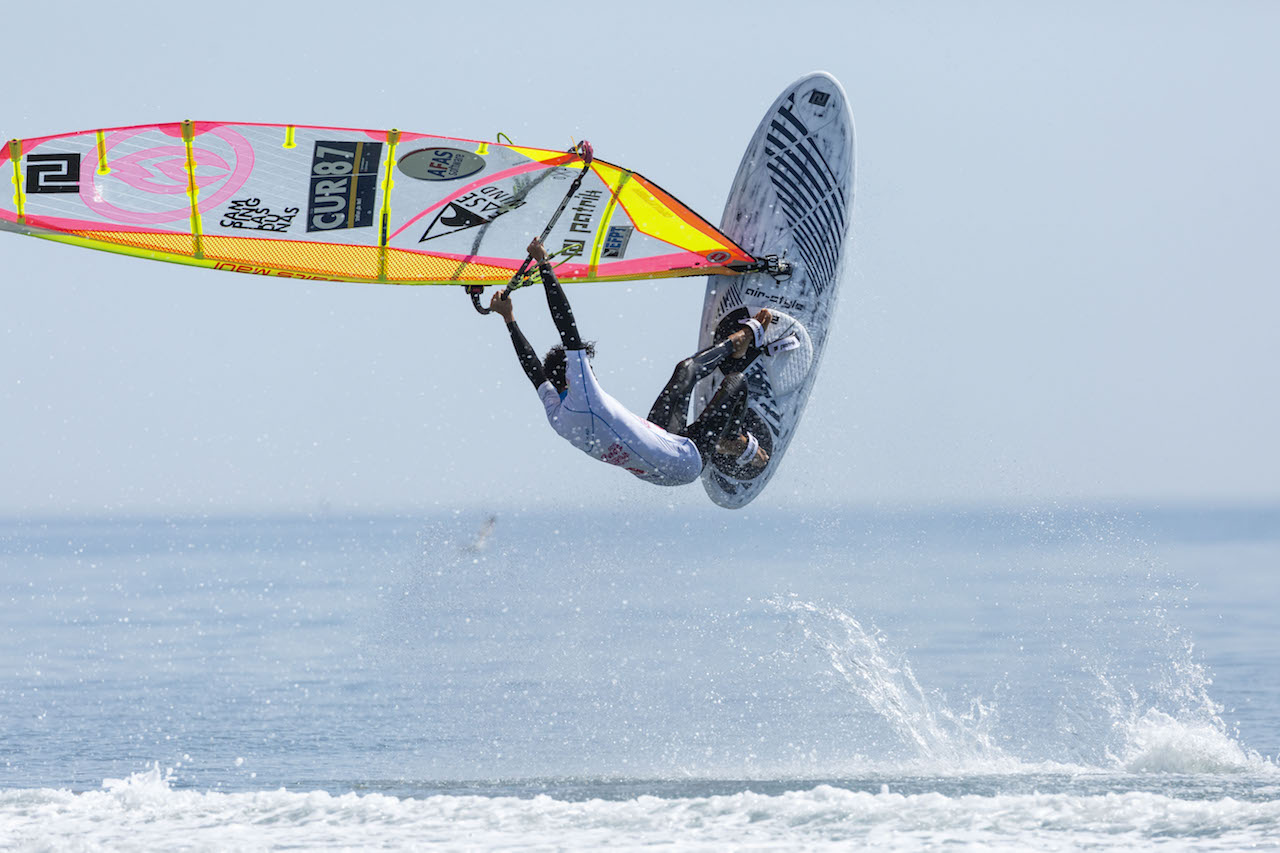 Due to a very rainy weather forecast tomorrow, the tow-in final had been moved to this evening. The heat included big names and real experts in this discipline: Adam Sims, Francesco Cappuzzo, Sam Esteve (JP/Neilpryde), Yentel Caers, Steven Van Broeckhoven, Antoine Albert, Valentin Böckler (Gunsails) and Davy Scheffers. Two EFPT juniors also made it into the final and had to take on the pro riders: Nil Bacon and Mathis Mollard. 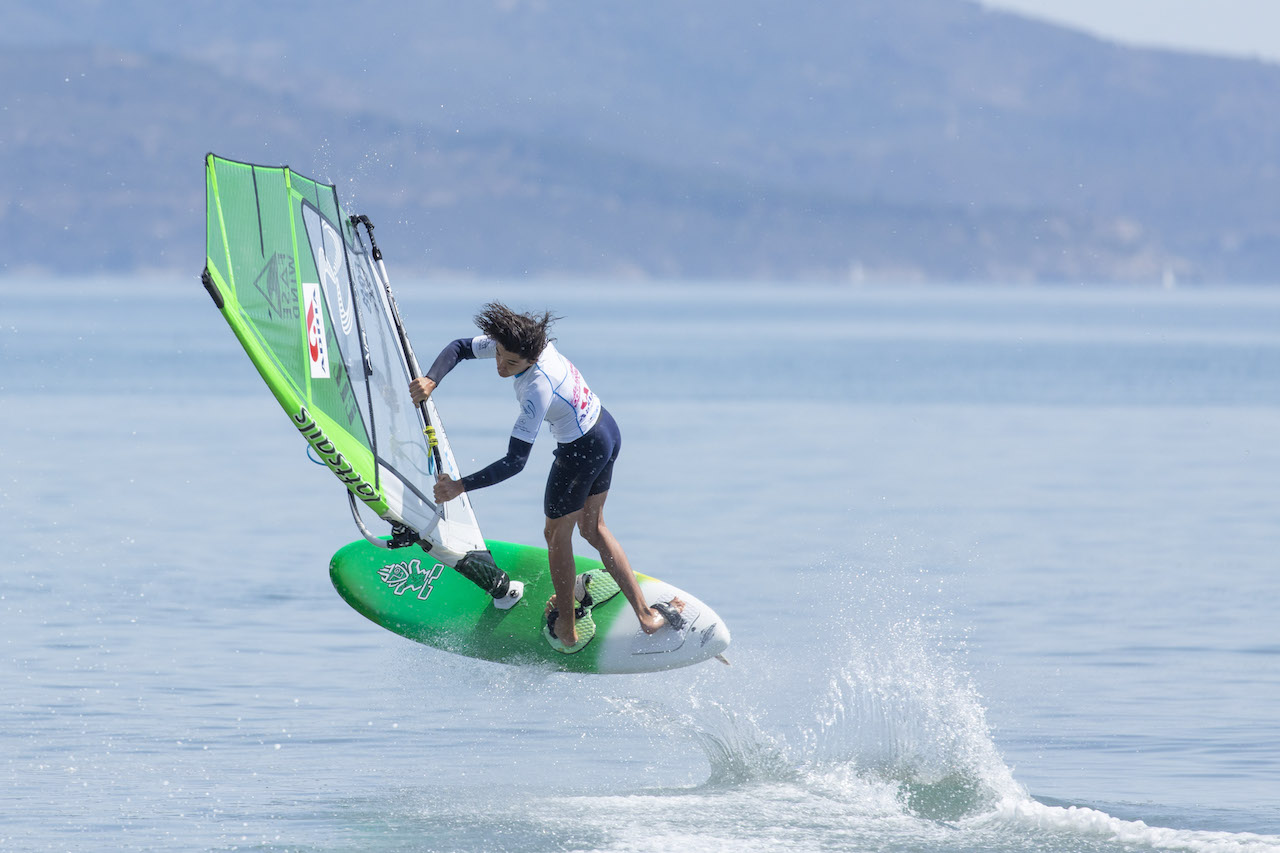 The format remained the same like in the qualification rounds- the sailors got three runs with the best score counting for the final ranking. It was quite obvious from the start, that certain risks had to be taken in order to make it to the top positions. Right from the start the competitors have been aiming for double manuevres. The young guns of the fleet put on a good fight, but couldn’t make it past place ten (Bacon) and nine (Mollard) in the end. 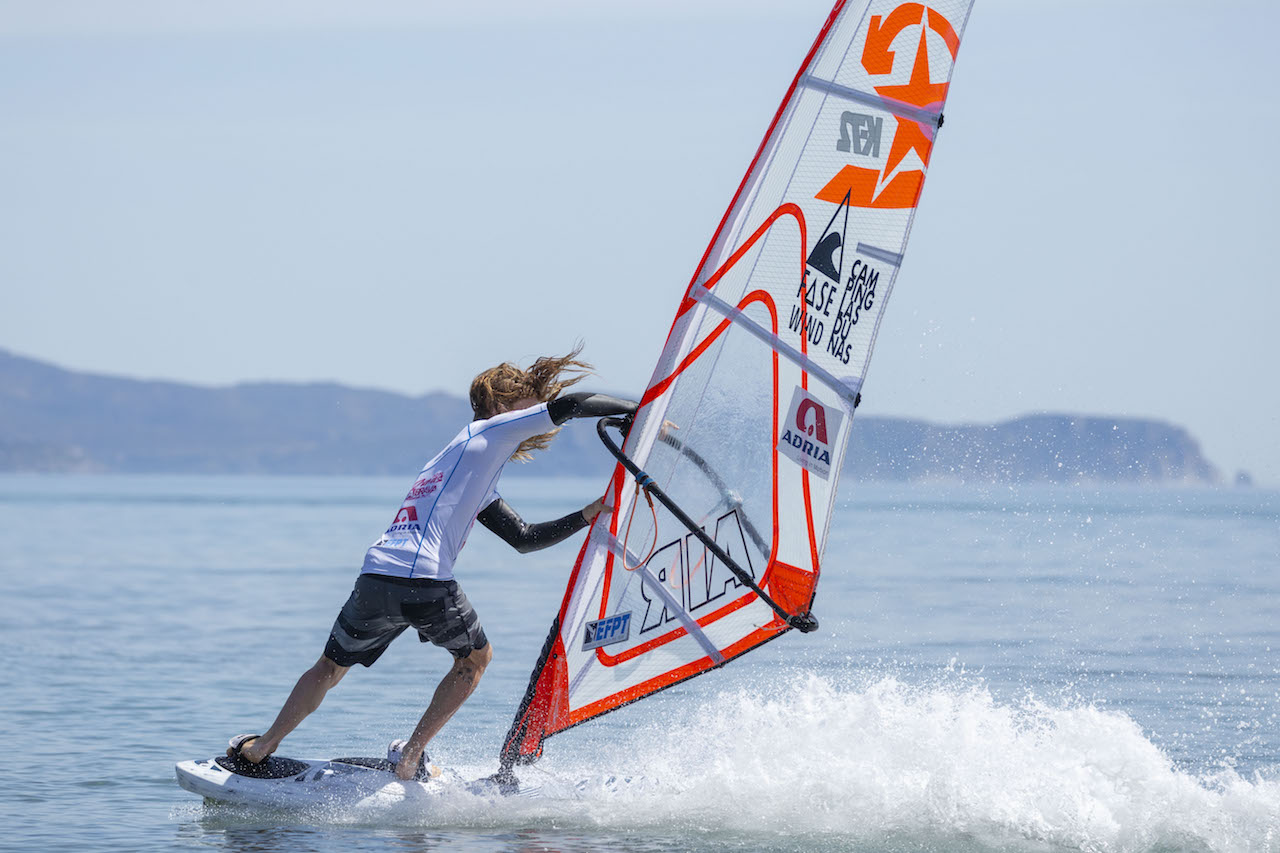 Adam Sims sliding through a spock (by Job Vermeulen)

Valentin Böckler from Germany landed a nice air funnel 360 (5,41) in his first run, however couldn’t match the other riders in their scores and had to settle for 8th place in the end. Adam Sims, who was definitely a contender for the victory today, couldn’t get the double culo that he was aiming for and ended up in 7th place. Steven Van Broeckhoven, who always tries to bring new moves into this discipline, ended up crashing both of his barracuda attempts, but could clear 6th place with a double air funnel in his last run. 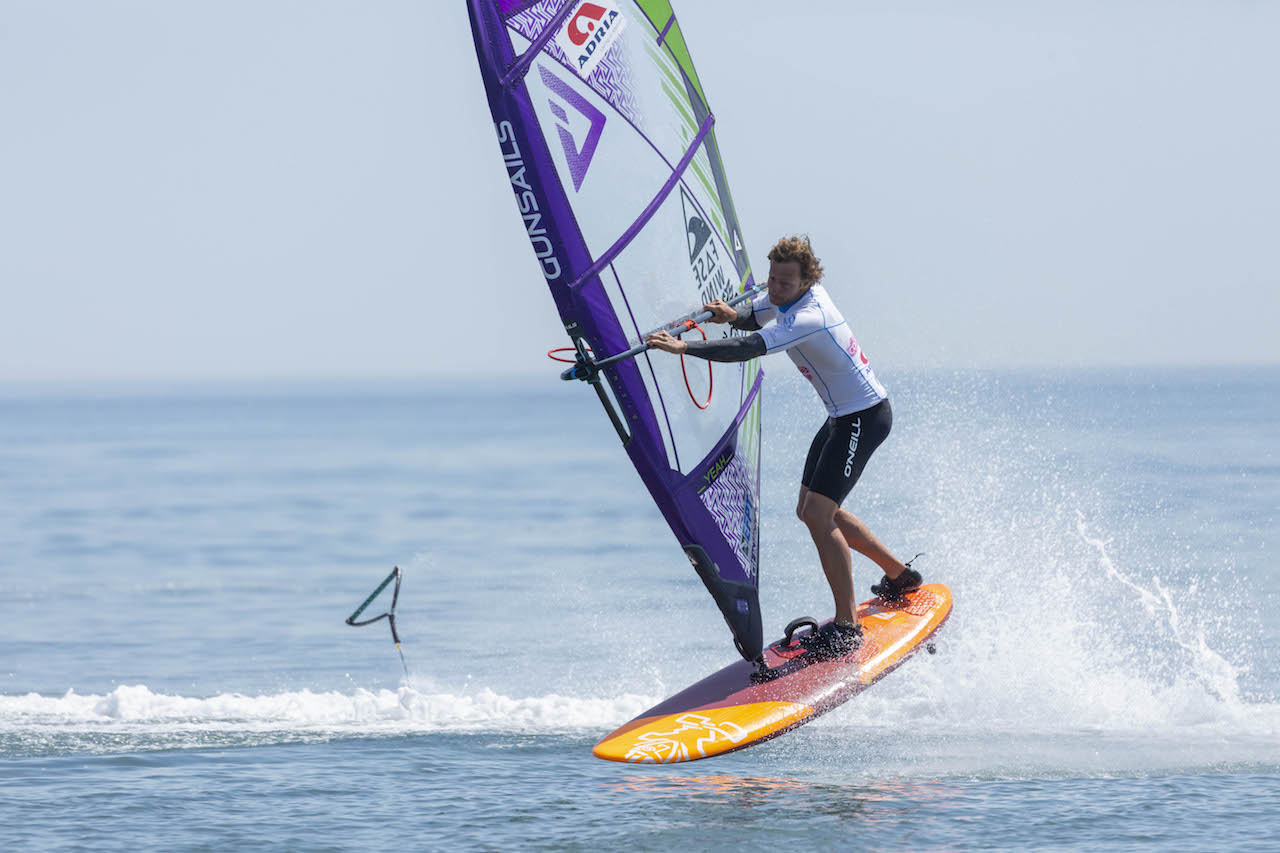 Fellow countryman Yentel Caers went for a huge air bob into culo, that could have potentially secured a place on the podium. Caers however couldn’t quite get a clean landing and had to put off with the 5th place. New Caledonian Antoine Albert, who won qualification round two, scored 7,16 points for a clean skopu and ended up 4th. Showman Davy Scheffers performed all of his moves super close to the beach which has been rewarded by the spectators. 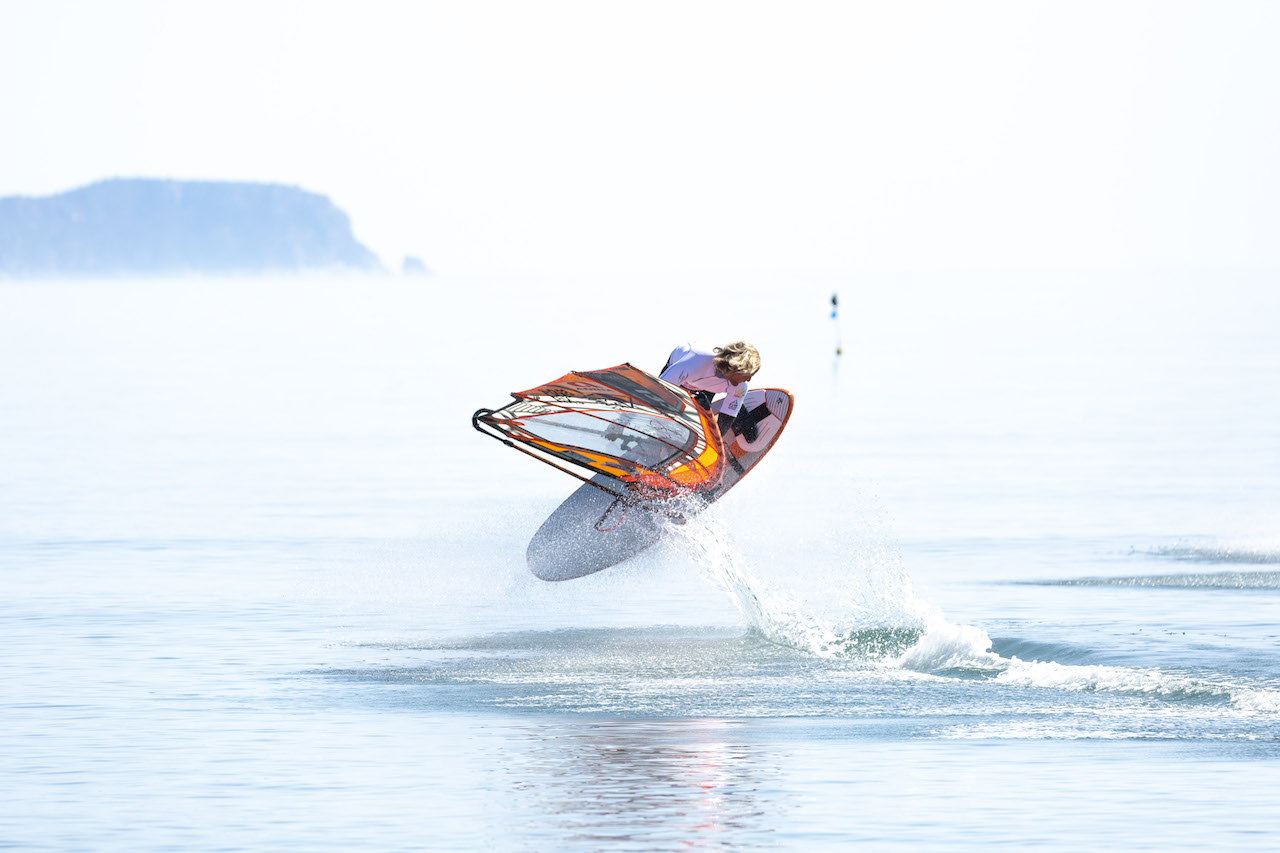 His last air funnel into burner eventually brought him 7,78 points and the 3rd place. Francesco Cappuzzo had been leading throughout the third round with a double culo (8,23) and was getting his hopes up for the tow-in overall win here at Costa Brava, however knew that Sam Esteve was always one to potentially pull off a winning move. Esteve lined up with perfect speed and stomped a clean and stylish burner into burner, dispatching Cappuzzo to second place afterall.

With three days left and a great forecast for the weekend, we are positive to also get an official result for the windsurfing competition. Fingers crossed for some more action tomorrow. 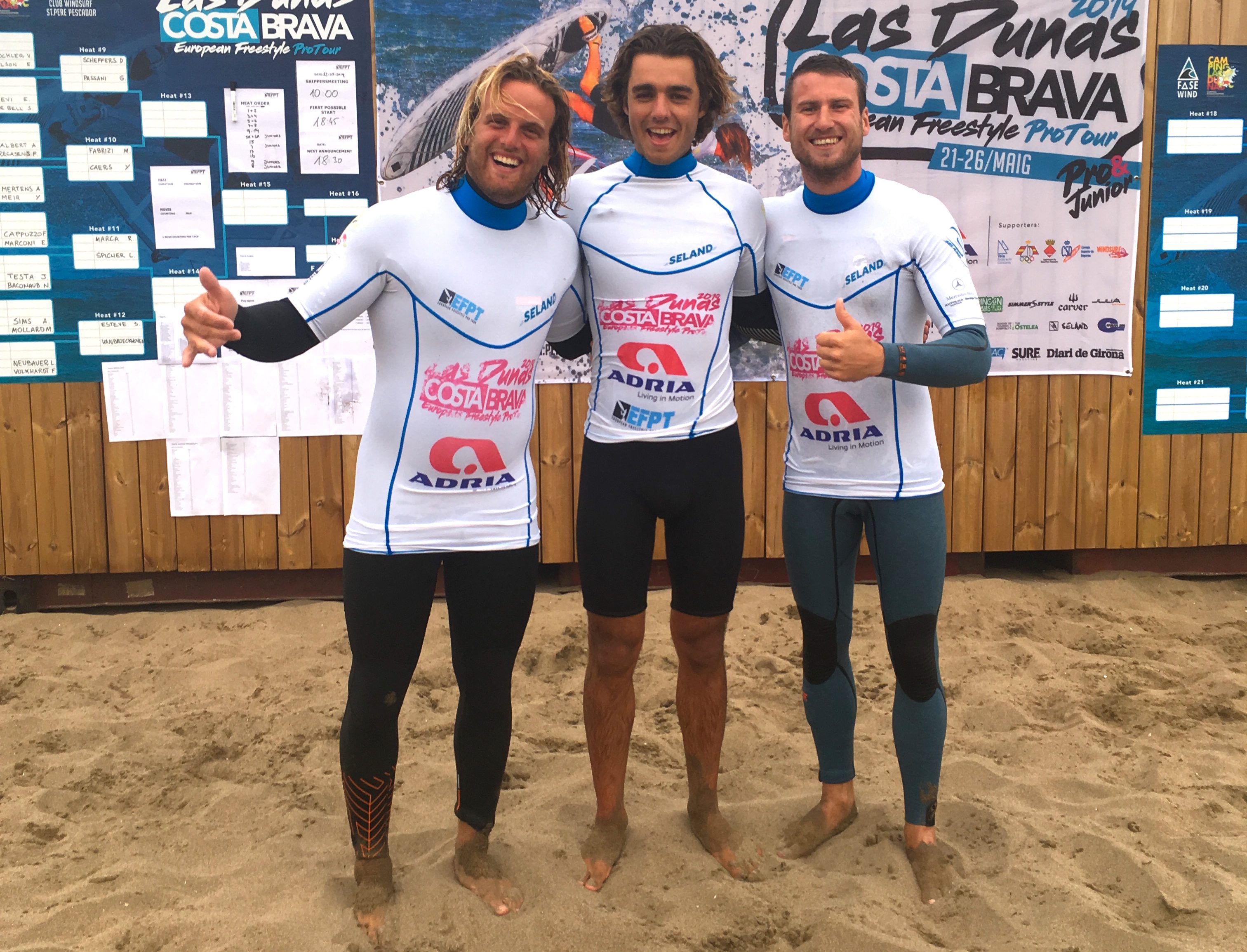 Top 3 of the tow-in final