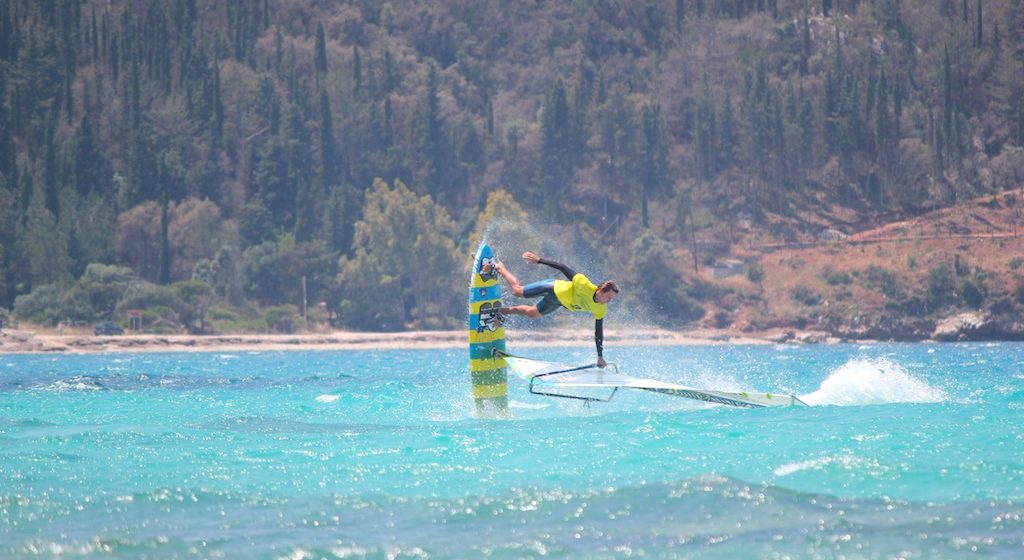 After the disappointing news from yesterday when we weren’t allowed to send the riders out on the water due to a restriction by the port-police on day 2 everything was looking better from the start: the permit was arranged, the buoy course was set and everbody was ready for the first EFPT freestyle event in 2015. The thermical wind started as forecasted around mid-day and increased hour by hour. Race director Tom Hartmann left riders on stand-by from 2.00pm onwards. Shortly before 5.00pm the conditions were improved to a point that the riders were comfortably powered up on their 5.0 to 5.3 m sails. Heat duration was set for 7 minutes with 3 minutes transition.

The first heat saw newcomer Christos Loizou (North/Fanatic) from Cyprus against Hugo De Sousa from Brasil who is definitely a hard draw in the very first round. Anyways the Cypriot could pull most of his moves, yet the Brasilian left him no chance by landing power moves and air moves throughout the whole heat. At the same time a battle between two english sailors completed this round. Adam Sims (Patrik/Sailloft) had a very close heat against young Jamie Howard (JP/Neilpryde). Both riders put together a very nice performance, yet in the end the decision of the judges favored Howard. Also the next heat between Vladimir Yakovlev (JP/Neilpryde) from Russia and Loick Spicher (Starboard/North) from France was an unsually close one. Yakovlev who is a very routined competition sailor could advance. From the next round onwards the level was already as high as it could get in an EFPT event. Hardly any crashes were marked down on the judging sheets whilst the riders showed power-move combinations as well as sliding maneuvres. An outstanding performance was shown by Hugo De Sousa who flew through double culos, air-funnell into funnells and flaka-shakas. He took out strong sailing Yentel Caers (JP/Neilpryde) and moved into the semi-final where he met and dominated over Rick Jendrusch (Severne/F2). Steven Van Broeckhoven (JP/Neilpryde) on the other side stopped Russian rider Yakovlev in the second round and defeated Adrien Bosson (North/Fanatic) in the semi-finals, who could take out his team-mate Max Rowe (North/Fanatic) in the round before. Steven Van Broeckhoven getting some height

The losers and the winners final were sailed with a heat duration of seven minutes, just as the rest of the day but the amount of counting moves was raised from three to four counting moves per tack. Even in the slightly dropping wind in the losers final, Adrien Bosson from France showed his potential against Rick Jendrusch. The French sailor landed all of his technical moves with great style and a good diversity which led to a 3:0 decision for the Frenchie. In the winners final once again European Freestyle Champion had to defend his leading position, this time for the first time ever against a contender of Brasil- Hugo De Sousa. Whilst the wind was already on the light side, both riders showed off their world-class sailing. Van Broeckhoven could one more time convince with his powerful style going through air-funnell-funnells, shove-it spocks and several other power moves with a height and speed that would seem impossible if he didn’t prove it otherwise. De Sousa on the other side was not less impressive landing double moves on both tacks, yet he couldn’t beat the reigning EFPT champion and current leader of the world-tour.

We tried to go straight into the double elimination but the wind dropped throughout the first heat to an extend that it wasn’t sailable anymore.

The result of today therefor is: We are hoping for more wind tomorrow. Skippers meeting is schedulded for 12.00 am with the first possible start at 1.00pm.