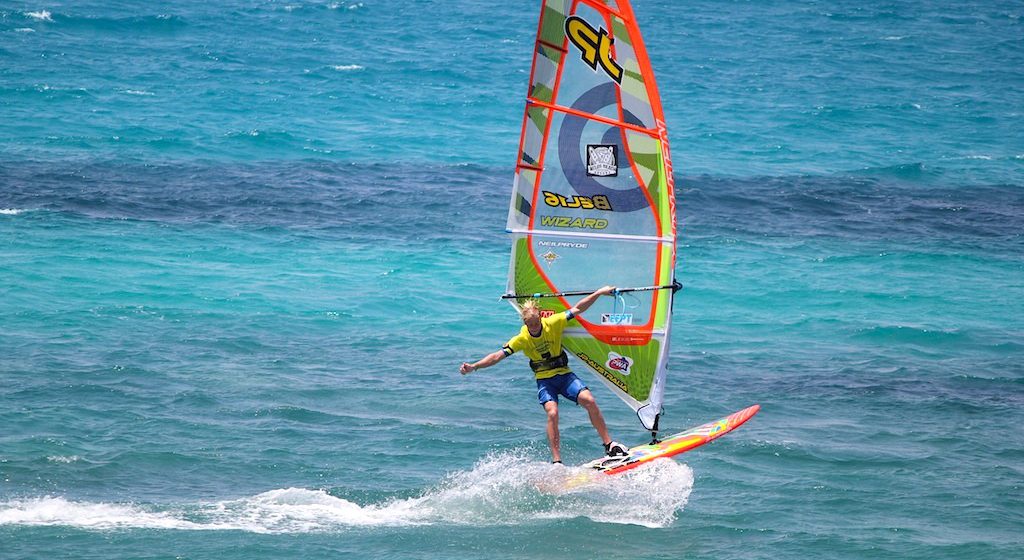 With a wind forecast that left us with low expectations for the morning, the skippers meeting was once again set for 12.00am. What we learned by now though is that this place is full of surprises when it comes to the weather conditions.

Already shortly after midday Milos Beach delivered the famous thermical wind of Lefkada. The first possible start was timed for 2.00pm. The riders looked powered up on their 5 squaremeter sails throughout the whole warm-up period. Just when heat number one started where Loick Spicher (Starboard/North) from Switzerland and Yentel Caers (JP/Neilpryde) from Belgium were battling for a higher position in the ranking, the conditions began to drop. Both riders were planing throughout the whole heat yet had to pump themselves into their moves. The style and execution of the maneuvres slightly suffered under the light wind conditions, nevertheless the sailors went for burners, culos, shakas and shove-it spocks. In the end the Belgian rider could convince the judges and advanced. The next heat saw an English battle once again in this competition when Patrik/Sailloft team-member Adam Sims was taking on Max Rowe (Fanatic/North). Both Brits could stick their first two maneuvres, a ponch by Rowe and a shaka by Sims but straight afterwards the wind dropped off and even though both sailors were putting all their efforts in, they couldn’t pump themselves into moves anymore. The heat was therefor cancelled and on stand-by for pretty much the rest of the day. Max Rowe with a ponch

With 15 minutes announcements and the chance of increasing conditions, the whole fleet was held ready-to-go on the beach by head judge Tom Hartmann.

Since the wind didn’t seem to come back though we called it a day at 7.00pm and released the riders. Skippers meeting tomorrow will be at 12.00am. We are hoping to finish the double elimination in the afternoon. Adam Sims with a one-handed shaka