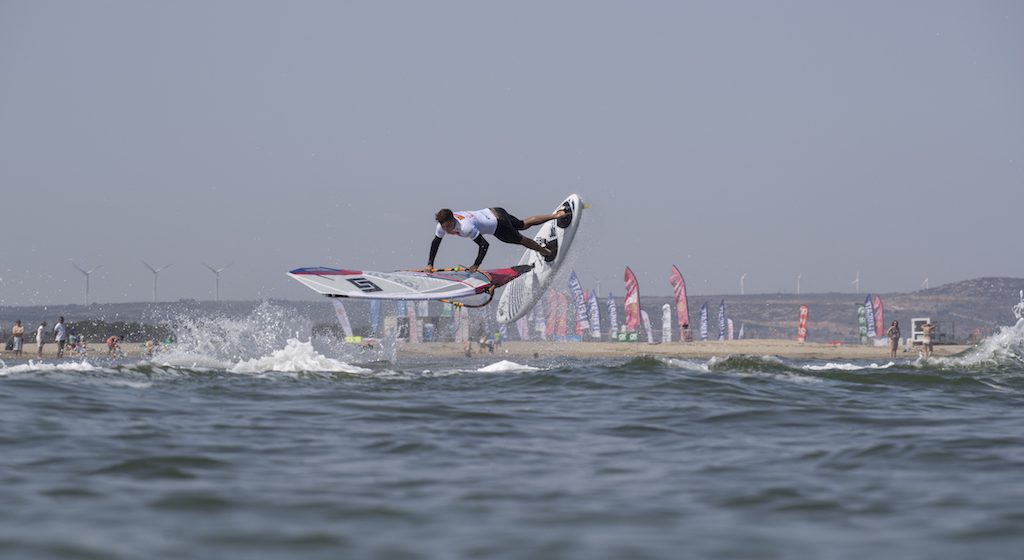 Day two at the famous Mondial du Vent provided perfect weather and a crowd pleasing tow-in competition.Sixteen riders signed up to fight for the top ten positions in Saturdays final. Qualification round one was sent out on the water today. The riders had two runs with the higher score counting and the top five would advance. The first official tow-in competition also gave the EFPT the chance to test the new live scoring system, which was developed by two really talented freestylers themselves: Julien Mas (Gunsails/JP) and Danny Kater. The maximum points for a move will be 10 and the riders on the beach a s well as the spectators were checking their phones to see the scores coming in and the ranking change. Mattia Fabrizi (Patrik) from Italy stomped a culo (6,31 points) in the first round and topped his own score in his second run with a perfect burner 360 (8,50 points), which put him in the lead.

Adam Sims (Sailloft/Patrik) from the UK, who was third overall in tow-in 2016 and who is well known to always be a contender for the podium landing double spocks, double culos and spock culos in competition was one to look out for. Sims went through a super fast and clean spock which scored him 6,69 points. Even though the Brit was porbably aiming for double spocks or a spock culo, the score left him in 4th position and gave him a ticket to the final. Tonky Frans (RRD/RRD), a showman as always, rotated through an air funnell burner (7,94 points), but couldn’t land his tow-in signature move: the skopu. However, Frans could secure his second place and the spot in the final with his first score.

What was Tonkys desperation became Nicolas Akgazciyans success and left him in 3rd place. The experienced French rider landed an air funnell burner (6,72) as well as the skopu (7,72) that we all have been waiting for. Suprise of the day was young Nil Bacon Aubert from France, who opened the first round with a perfect double funnell (5,28). Nil tried had his first tow-in attempts yesterday and showed some incredible talent at this discipline. Neither Loick Spicher (RRD/RRD) from Switzerland nor Valentin Böckler (Gunsails) from Germany could match his score with a culo (4,50) and air funnell funnell (4,38) respectively. Felix Volkhardt, who was entering a tow-in competition for the first time at the DAM-X 2018 and who was landing nice burners and funnells in yesterdays training, couldn’t show the same performance today and had to let the other riders pass to the final. Fleet number two will be on the water tomorrow around 2.00pm. Make sure to follow our live scoring online. We would be happy to hear your feedback via mail or PM on Facebook!