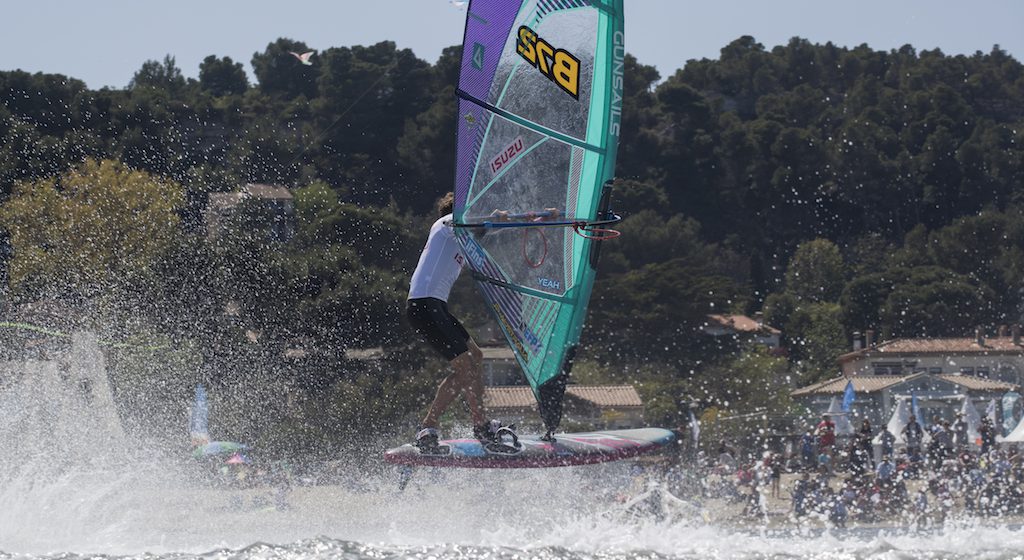 Day three at the Mondial du Monde provided an action packed afternoon. When the second tow-in qualification round was sent out on the water, the excitement was rising amongst the riders and the countless spectators on the beach, as speaker and part of the organisation team Julien ‚Wesh‘ Taboulet, introduced and pushed the competitors to show their best tricks.

It has been a tough draw for the rookies like Alex Mertens (Severne/Fanatic) and Romain Le Gouez (North) to be up against experienced freestylers like Marco Lufen (North/Fanatic), Stam Promponas, Riccardo Marca (North/Fanatic), Antony Ruenes, former Tow-In European Champion Steven Van Broeckhoven (Gunsails/JP), Tow-In Champion of 2016 Antoine Albert (Goya/Goya) and winner of the tow-in at the Surf Worldcup in Austria 2017 Sam Esteve (Neilpryde/JP). Alex Mertens from the USA (by PB)

However, yet another uprising freestyler, Alex Mertens, was about to cause an upset in the pro fleet. After Riccardo Marca, who is a more routined competitior, couldn’t get his game on in the training and the first round, it looked like Mertens would advance to the final, going through an air funnell and a burner (5,19). Marca could just get his nerves together to land a burner into funnell (5,25) in his last attempt. The supportes on both sides held their breaths when the scores came in. The young American Alex Mertens had to let the Italian rider pass through to the final in the end, with a point difference of 0,06 only. Antoine Albert in his winning move (by Pierre Bouras)

Local rider Sam Esteve could secure his ticket for the final with an air funnell into burner (5,63).

If there was a prize for the most horrible crash, it would have been awarded to Marco Lufen from Germany who bailed full speed, still holding onto the rope of the jetski. Even though Lufen landed perfectly clean air funnell funnells in his training runs, he unfortunately couldn’t put it together once the competition was on. Stam Promponas from Greece, who used to be a regular freestyle competitor of the EFPT many years ago, showed that he could still keep up with the next generation and landed a fast double funnell as well as a burner. The points however were not high enough to let the Greek sailor pass on to the final tomorrow.

Romain Le Gouez, who only had a few tries in tow-in ever, also managed to fly through a proper funnell in his second attempt, but couldn’t match the scores of the top guys.

Results of the 2nd tow-in qualification round:

Saturday, the 21st of April is expected to be the busiest here at the event-site of the Mondial du Monde. The weather forecast is sweet and promises 20 degrees and unclouded sunshine with no wind. What is more than unlucky for the freestyle windsurfing competition, will provide a perfect arena for the top ten tow-in riders, to fight for the 2.500€ prize-money. Stay tuned for the action tomorrow.

Riders in the tow-in final: