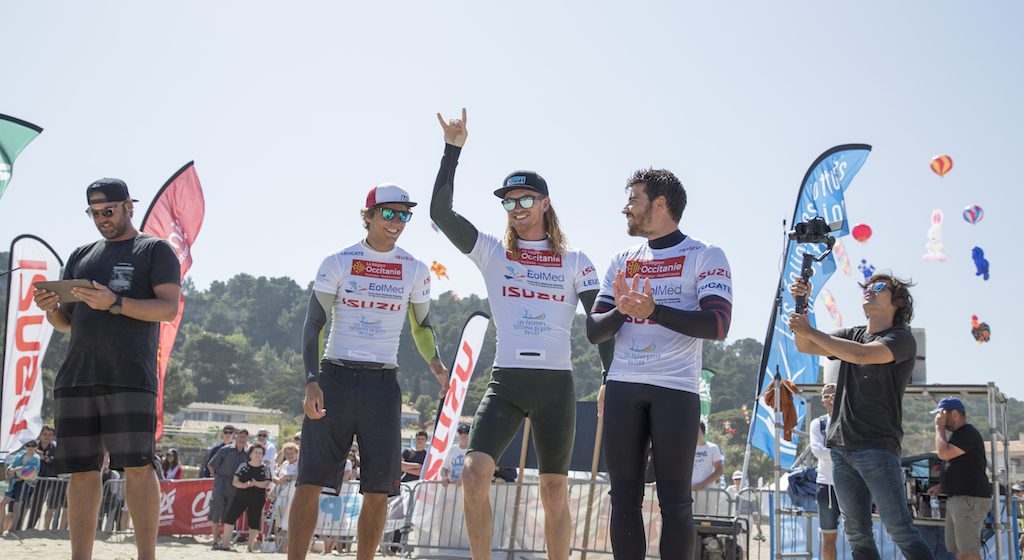 On the penultimate day of the Mondial du Vent 2018, the ten riders who qualified in two intense qualifying rounds over the past days were up to fight for 2.500€ prize-money that were up for grabs.

To guarantee a better show and give the riders the chance to risk more, the race director decided to grant everyone three runs with the best move counting. The beach was packed with specators, who were on fire cheering and applauding for every move and each attempt. The atmosphere was cooking on the beach when local rider Nico Akgazciyan showed an air funnell into burner (7,97) in his first run. A score that he couldn’t up anymore in his later attempts, going for a skopu funnell as well as another air funnell into burner. Fellow landsmen Antony Ruenes and Sam Esteve were answering with sick air funnell and burner combinations. Latter landed a perfect double air funnell into funnell (8,25), which was honored by the crowd. Sm Esteve in the final (by Pierre Bouras)

Belgian rider Steven Van Broeckhoven who is always in for a good fight went for a safe double air funnell into funnell (6,84) in his first round and went all in in his second attempt, going for a barracuda which he unfortunately couldn’t land. It is always nice though to see somebody pushing for new tricks in this discipline.

Mattia Fabrizi from Italy tried to repeat his performance from the qualifying round, yet couldn’t get past the 8 point mark with his air burner 360s. Italian landsmate Riccardo Marca was struggling with his moves today and couldn’t score as much as he had probably hoped for. Tonky Frans circled through a nice skopu into funnell but had to jump off in the end. The perfect burner 360 that he landed in his second run, led to his high score of 7,63 points.

15 years old Nil Bacon Aubert scored with a double funnell (4,63) in his first run and was then chasing the skopu in his next two rounds. The young French rider had his first ever tow-in attempts just two days ago and truly deserves a lot of respect for his courage and talent to compete in this strong fleet. We are definitely looking forward to see more of this rising star.

Antoine Albert who looks like he could skopu funnell even in his sleep, scored a 8,31 straight away in his first run and therefor ended up with the second highest points of today. Adam Sims with the winning move: a double spock (by Pierre Bouras)

Winning the tow-in competition at the Mondial du Vent 2018 has been British freestyler Adam Sims who is now officially back from his injury break and 100% back in the game. Sims is one of the few riders who would go for spocks and culo combinations in tow-in. Today he managed to land a flawless double spock (8,44) in his first run. He was the third rider on the water today, which means that his high score couldn’t get matched in 25 total move attempts by all the riders combined. The UK sailor looked super happy and deserves a special mention here – apart from his top perfomance in the tow-in, he is also responsible for the daily video output of the EFPT.

As the weather forecast doesn’t seem too promising, we are looking at a calm day tomorrow. A tow-in show with the ramp is schedulded for the afternoon and the prize-giving will take place in the early evening.