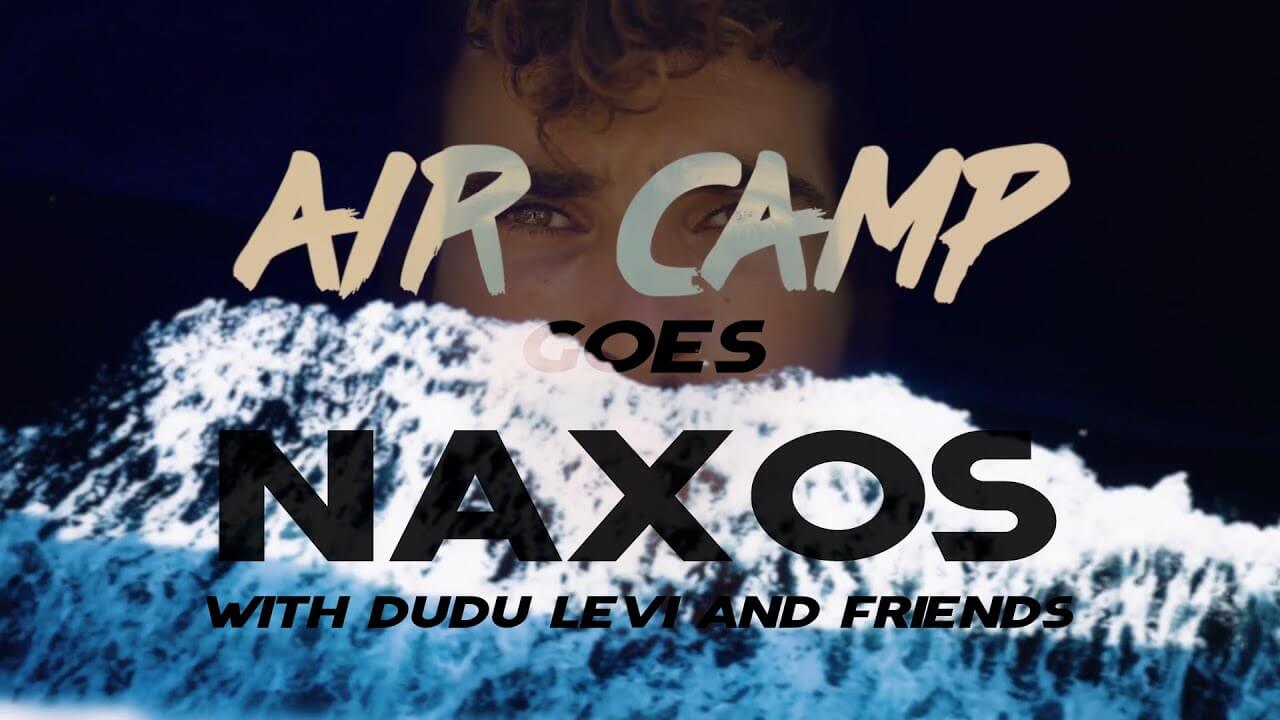 OH MY GOSH… Have you seen Dudu Levi (Starboard/ Gun Sails) in action in the latest Air Camp video? If you haven’t yet, you are missing out! We caught up with the man himself as well as with Timothy Cowen, the cinematographer behind the project. The duo tells us all about their inspiration, Naxos as a training spot and about their careers. Join us in finding out the behind the scenes gossip, but first make sure to check out the mind-boggling action in the video:

EFPT: Sick production Tim and Dudu! What inspired you to make it and how did your collaboration come to be?

Dudu Levi: The idea was simple: make a third episode of Air Camp which is a series of training videos that was first created in Capetown with a group of friends. Tim was working on it as the producer, filmmaker and editor. When I decided to travel to Naxos this summer, I asked around who wanted to join me and Tim was up for it right away! Tim is a friend who is always fun to hang out with. Besides he is really talented! And it’s always fun to work with a person who has the passion to create the highest level of content.

Timothy Cowen: Thank you so much! Zero production actually, just me, my camera and a very accommodating girlfriend, allowing us to go on holiday and bunk up in one room with Dudu for 2 weeks…haha! I’ve had a passion for filming freestyle windsurfing (and freestyleing itself) since training as an instructor in Vass in 2006. Andy “Bubble” Chambers, Si Hurrey, Oli Scott, Collin “Whippy” Dixon, to name a few, would be ripping on the water back then. I’d sit and film on the beach making clips of them, then (after a brief haitus pretending to be a rockstar) I went on to work in television. This lead me on to film Sports Journalism around the world on various world tours, but I always hoped for an opportunity to make films similar to the likes of Andre Paskowski. He was a true legend of the sport. His movies like “Commited”, “Seven Sons”, “2forTen” were the movies that got me hooked on the sport, not just on the water, but off of it as well. Telling the stories behind sporting athletes is key for sports to thrive in my opinion, and it’s something I miss in windsurfing. Anyway, a few years later I went freelance and had the opportunity to travel to South Africa, which lead to the first Air Camp being filmed as a fun good-vibes summary of our trip. Then I got run over by a pick up truck and the pandemic hit…  so I had a bit longer to edit the first episode than originally planned… Now I would like to try use Air Camp as a vessel to promote the filthy, underground, grass-roots sport that is freestyle windsurfing, and freestylers themselves – I have a lot of respect for the commitment these boys have put in physically and mentally to achieve the truly extreme level the sport is pushed to and Dudu is a perfect example of that. 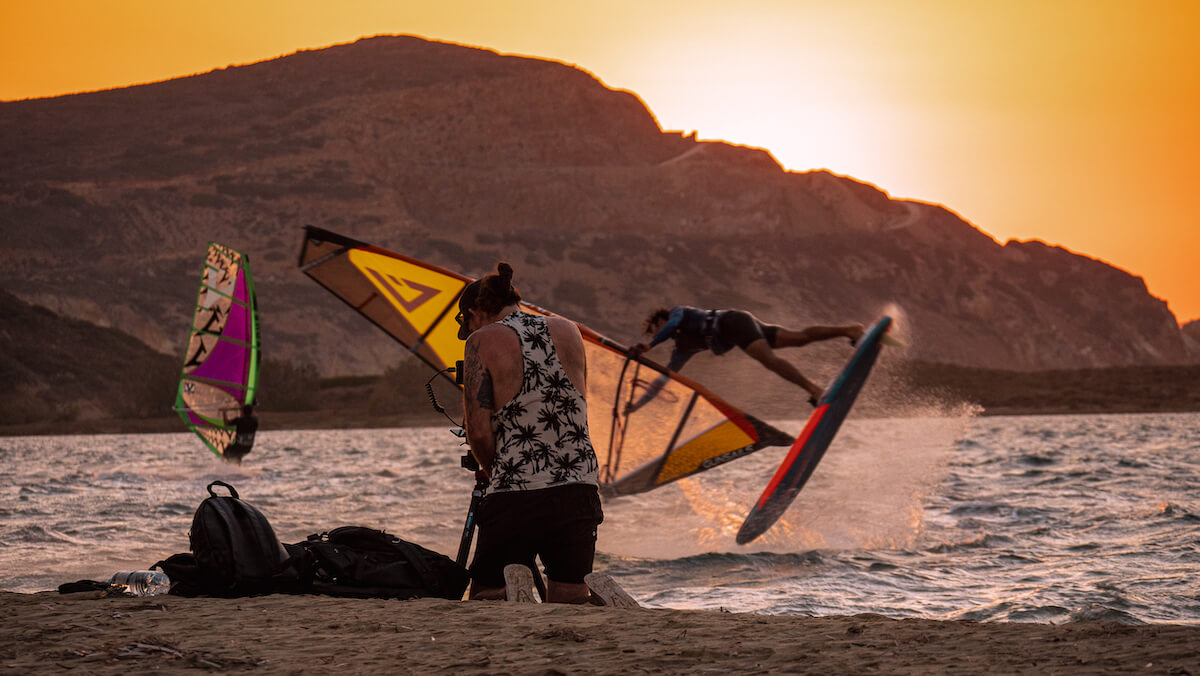 Dudu throwing down a Shove-it Spock in front of Tim’s lens. Picture by Mothy Media.

EFPT: How many days did you shoot for the project?

Timothy Cowen: When taking on a project like this I tend to take my camera everywhere with me – so my folder catalogue would say 21 days as I was away for 3 weeks. For the action section we shot about 4 days at different locations and angles in moderate to full power wind. One day in the water and 2 days interview shooting and some other days drinking coffee, timelapseing, freesailing, filming Dudu shaving his moustache, taking his suit for dry cleaning and chasing turtles…

“ I saw the video 3 times in a row! It’s really cool, i think everyone will agree that when you see a sick clip from your homespot it feels amazing. I’ve known Naxos for 17 years now and this spot i’ve been to every day for the last 7 years for training. It was really sick sailing with Dudu, too bad I wasn’t there when Tim was filming.”

EFPT: What were your impressions of Naxos?

Dudu Levi: I really recommend Naxos for a windsurfing holiday and training! Everything is there! Most important: perfect windsurfing conditions at the highest level you can get. Besides that enough to do next to windsurfing.

Timothy Cowen: Naxos is an absolutely horrible and disgusting place, the weather is terrible, its too windy etc… But on a serious note, what an incredible island, the people there are just wonderful, it has this cunning way of having all the right things,  authentic Greece, beautiful architecture, all the food tastes amazing,  and the spot… all I can say is when it is ON, its the best place I have ever been to train windsurfing and an absolute playground for freestyle. Two lagoons and open sea, onshore wind, NO KITES, what more do you need?

EFPT: Now that you discovered this perfect location, are you going back or trying to find a new gem for next year?

Dudu Levi: It’s hard to know what next year will look like with competitions and training. So there is no clear plans. And I always want to get to new places! There are so many more that I have not been to yet that look very promising… 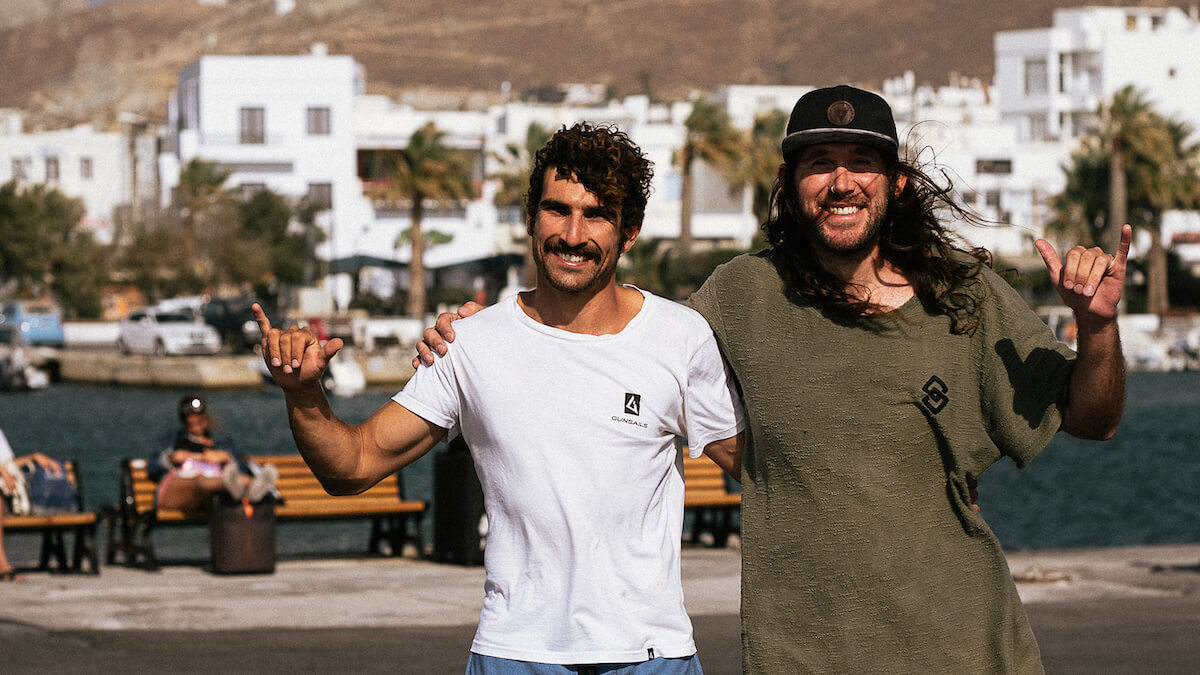 Dudu and Tim on Naxos. Picture by Mothy Media.

EFPT: The video is a modern day portrait of you Dudu. Do you think Tim’s representation of you is accurate? And how do you think you fared at this Tim?

Dudu Levi: I think you can see through the film who I am quite well!  And there is more about me that did not get into the film…

Timothy Cowen:I made him look like a much better windsurfer than he actually is, CGI is a wonderful thing, it’s a shame really as I have never been to Naxos, but it is amazing what you can do with a Green-screen, some fishing line and a fake moustache… also I am amazing at Photoshop. In all honesty, and in Dudu’s credit, I missed a few of his best moves. I like to film behind rocks, in-between grass, through orange juice cartons… its not my fault if he lands the biggest Air Skopu of his life right behind my refreshing bottle of “extra juice bits”. The world wasn’t ready for that priceless bit of content anyway is all I can say.

EFPT: Dudu, let’s get personal. You mention windsurfing helped you through some hard times, can you elaborate on that?

Dudu Levi: Like any person! I experienced different moments in my life and some of them were not that easy.  I always found some warming thoughts in windsurfing which made me think more positively and optimistically. It has definitely given me the strength to go through these moments. 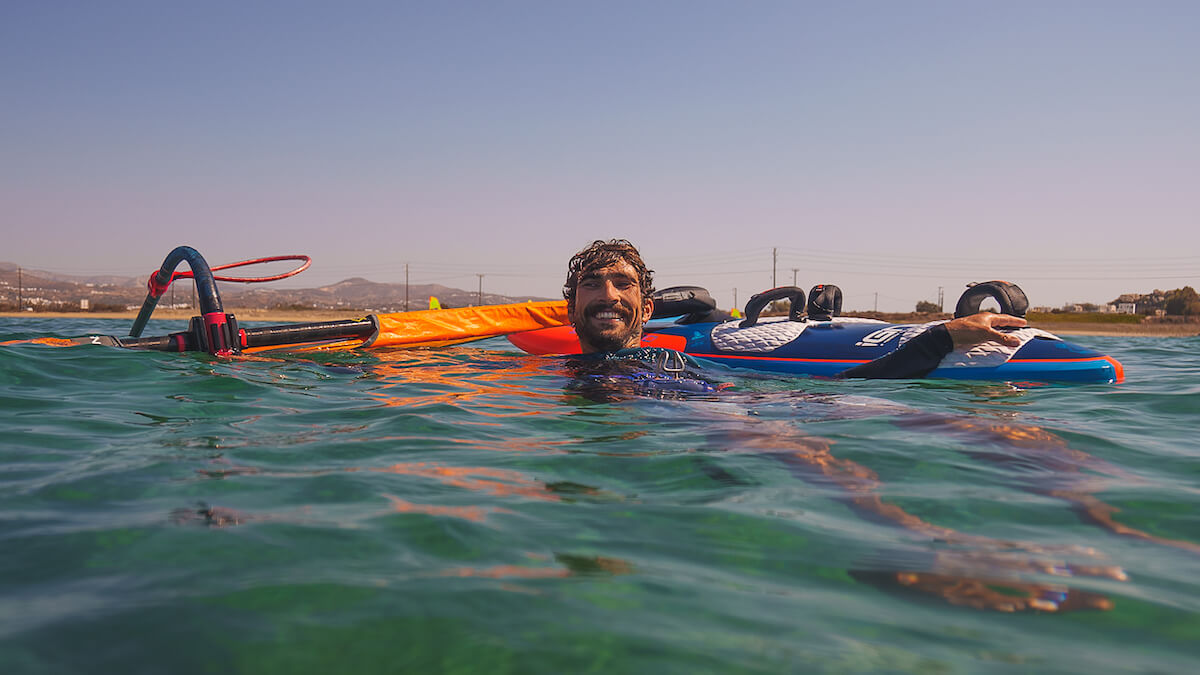 EFPT: In the video you’re being called one of the most underestimated freestyle windsurfers, how do you feel about that?

Dudu Levi: Underestimated is a big word! But as an athlete who has invested so much to reach the level of a professional windsurfer and still don’t have enough support and recognition that I can simply be a full time pro that does sound accurate. I currently have to deal with lots of other things like different jobs, which definitely makes it harder to progress.  In my opinion, every athlete who reaches a high level really needs to be able to focus on it full-time to reach their peak.

EFPT: Speaking of progressing, you’ve learned the No-Handed Burner in Naxos this year, any other moves you were working on?

Dudu Levi: After all the time with Covid I didn’t have the opportunity to train very consistently, so I was working on getting my moves locked again! I definitely also succeeded at making my moves bigger and higher than ever with the unique conditions on Naxos. 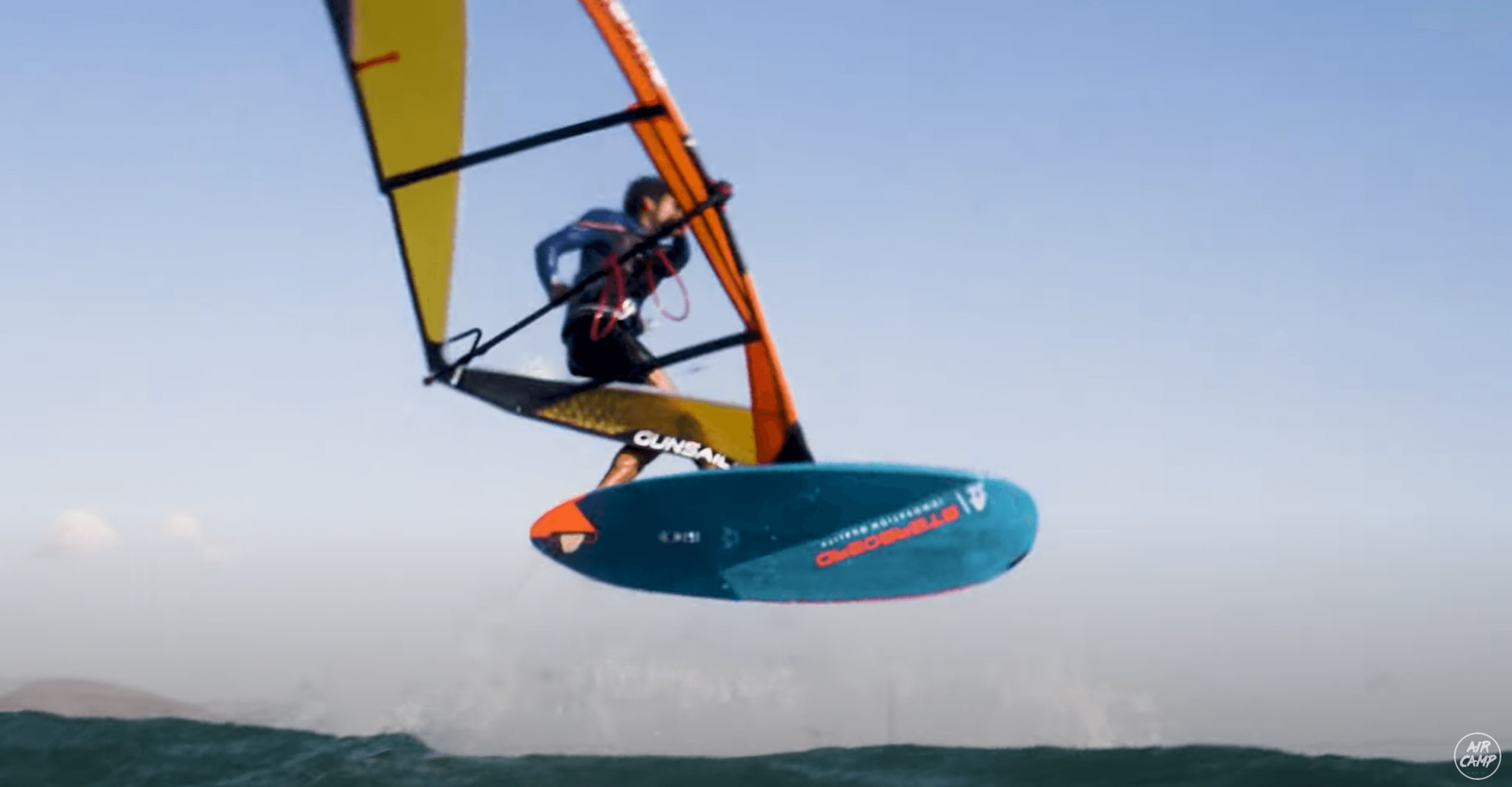 Dudu initiating his signature move – the Air Bob. Frame from the video by Mothy Media.

EFPT: Yes, you probably have the best Air Bob’s in town, do you think you have dethroned Kiri on that yet?

Dudu Levi: I have the biggest 😉 hahah, I love this move so much! But there is still place for improvement of skill and style if you compare to some of the top windsurfers like Kiri!

EFPT: Did your sick style translate into competition results this season?

Dudu Levi: This year I managed to do one event of the European Freestyle Pro Tour in Rhodes which was a real show! Unfortunately I only managed to get a 17th place, but that’s how it is sometimes in competition. I also participated in the PWA event in France and came in 9th place which is the highest result I have ever had on the world tour! 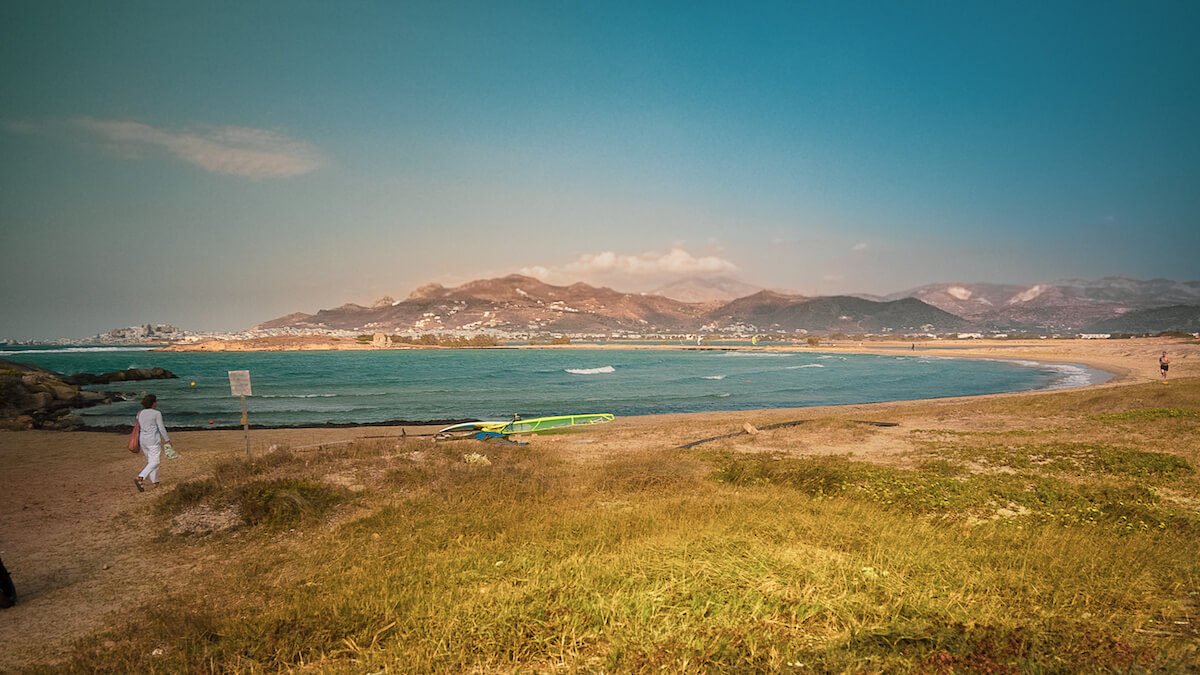 EFPT: Back to you Tim, the music in the project is sourced from the bands themselves, can you tell us a bit more about this?

Timothy Cowen: Absolutely, the bands (bar one) are all people I have played with or performed with in the past. I prefer to use my friends music where I can, as I have far too many talented friends making great music. Of Allies are an awesome group of friends close to where I grew up in Hull, UK. Their cover of Phil Collins – In The Air Tonight… speaks for itself. Power Apes tracks rip! I had the pleasure of touring with the band’s drummer Boris up and down The Garden Route in South Africa which was an absolute blast. The Deadlights is masterminded by a great music producer and friend of mine Guy Elliott-Davies, we worked together in a recording studio in Guildford UK and bonded over our love for early naughties emo music. The Paz Band‘s lead singer is a contact of Dudu’s from Israel, she has pipes! Awesome tracks. So grateful everyone agreed to let us use their music. Dudu loves his classic rock, so I tried to source bands that could replicate that vibe and luckily didn’t have to look too far.

EFPT: Are there any more Air Camp videos coming up? Can you spill the beans on some future plans?

Timothy Cowen: No, absolutely not, I am sick of this shit and working with Dudu was a complete nightmare. It’s going to take another pandemic for me to recover from it. However, I have been known to 360 on the odd bit of white water before… and I like filming windsurfing.  No plans at the moment, but open to ideas and any excuse to escape the winter… or dive deep into it and get frozen.

EFPT: The video also includes a mystery guest introducing Dudu from his camper, any chance we can reveal his identity in this exclusive interview?

Mystery voice: If you watch closely and all the way to the end, you might find out…

Dudu Levi: I have no secrets! Mr. Julian Weimar is the spirit behind the first Air Camp project and it was great to get him in on this video as well. He is also a coffee lover like me!

Julian Wiemar: I had little actual importance to the video as I wasn’t on Naxos this summer, but I know Dudu and so I introduced you to the man from the east. He’s got such a raw passion for freestyle, sometimes he keeps showing me moves for hours and wants to analyze every detail of them. In general all he wants is to sail a good but simple freestyle spot – he doesn’t like driving far or waiting for tides or whatever – he likes to set up a camera, sail all day, then grab a beer in the evening and watch every single clip. That’s Mr. Dudu for me.

EFPT: Thanks guys! We are looking forward to more epic content from you!