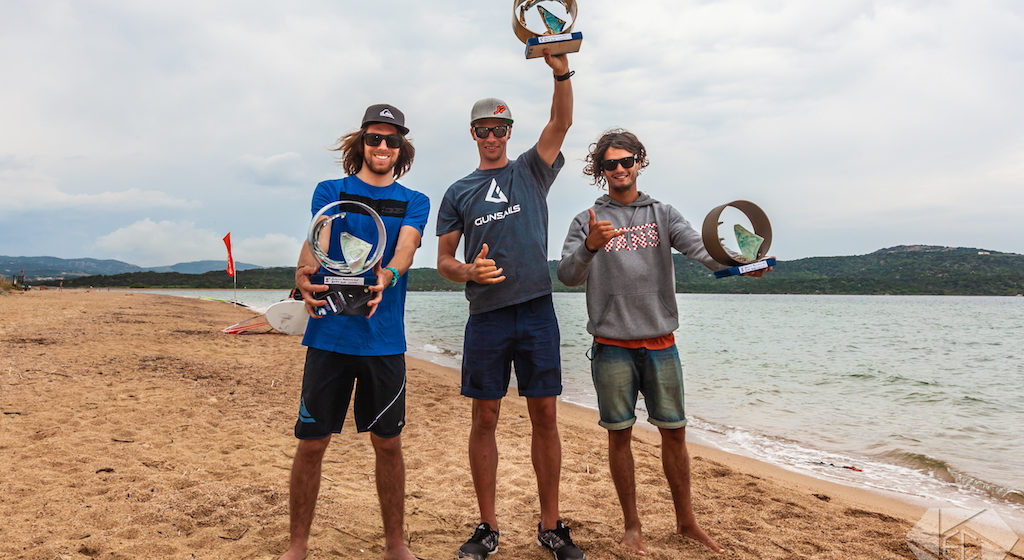 On the last day here at the Windsurfclub Porto Liscia, our prayers have been answered. With clear weather in the morning, the easterly wind started to fill in at 09:30 am and the green flag for the first heat of the day went up shortly after 12.00 am. The riders picked their 93 to 100 liter boards and their 5.2s. With this wind direction, the wind remained on the light side and gusty throughout the whole afternoon. Despite the challenging conditions, the sailors put on a great show in the 10 min heats caused some upsets in those later rounds of the single elimination.

The lighter wind favored Loick Spicher (RRD/RRD) from Switzerland, who is a regular on tour for several years now. He could defeat Italian top level sailor Riccardo Marca (North/Fanatic) in a very close fight and moved onward to Giovanni Passani, who is one of the title contenders this year. However, Spicher kept his game on and passed the Italian star to then face Steven Van Broeckhoven (JP/Gunsails) who was climbing up from the other side of the draw, taking out French freestyler Antony Ruenes and tour-leader Tonky Frans (RRD/RRD). The Belgian multiple European Freestyle Champion didn’t leave Spicher much chance though, putting down one of the highest scoring heats of the competition. The judges marked down a culo, a regular chachoo and an air funnell on starboard tack and a barracuda, a shaka and a lolypop on porttack to count. Like this Van Broeckhoven proved once again his high technical skills and diversity in the changeable conditions of today. A shoutout at this place to Loick Spicher who ended up in an excellent second place and made the first international podium of his career. Word is out that we’ll see more great results of the Swiss sailor in the future. Steven in front of Adams lens (by Emanuela Cauli)

For third and fourth place we saw yet another close heat between Frans and Passani, that favored the Italian rider in the end. However, the Bonairean keeps his grip on the first place overall, yet has two top level athletes at his heels, who are also about to follow the whole tour this year, ready to give him a hard time. After howling winds at the EFPT in Neusiedl am See and light wind here at the EFPT Sardinia, it becomes more and more obvious what it takes to win the overall title this year. The riders in the top positions will have to stay focused on their training in varying conditions and keep a close eye on sailors like Loick Spicher, Riccardo Marca, Mattia Fabrizi (Patrik) and Julien Wiemar (Severne/Starboard), who are also doing their homework. Top 4 of the day (by Emanuela Cauli)

We had a great event here in Sardinia and are grateful beyond the limits that we had the chance to return to this place. The next tour-stop will take the EFPT crew and riders to a new spot, Matas Blancas in Fuerteventura, a flat water paradise and then onward to Lanzarote, where we expect strong wind and waves. The chase for the European title this year remains an exciting one and we are looking forward to what the season might hold for us.